It’s been a quiet winter. Due to a combination of injury, bad weather, work and general apathy I hadn’t climbed a mountain since October. It’s been a strange winter in Edinburgh – surprisingly warm with lots of rain but no snow. A brief attempt at Stob Coire nan Lochain in January had to be abandoned early on as the temperature was high enough to turn the snow into slush and cause me to sink thigh-deep with every step - the risk of avalanche was too high. However, all was about to change….

With a day off planned for the 24th March, I was delighted to be injury free and faced with an excellent weather forecast

. MWIS forecast blue skies and predicted an 80% chance of cloud-free munros in the west. The only warning was for gale force southerly winds strengthening through the afternoon. When the Met-Office forecasts a risk of “being blown over” you can’t help but be slightly concerned

, but with the forecast of blue skies over the whole West Highlands I couldn’t resist a walk. The only decision left was where to go…

It had been 18 years since I first climbed Ben Cruachan. I remember sitting on the summit aged 12 in blazing July sunshine just amazed by the views over the highlands and out to sea. The Cruachan horseshoe in winter would surely be a fantastic walk – best take the good camera.

With the forecast of winds strengthening through the day, an early start was in order. Dragging myself out of bed at 5:45 was a challenge, but once out on the road I was wide awake and excited at the prospect of the day that lay ahead. As predicted, the weather was beautiful. Despite the usual procession of lorries slowly winding through the Trossachs (and a brief stop at the Green Welly) I arrived and started uphill at 8:15.

The start of the route is steep but it’s a good way to shake off the cobwebs. As it’s steep, height is gained quickly and I soon emerged into the vast coire containing the Cruachan reservoir and Dam. The scenery was stunning. 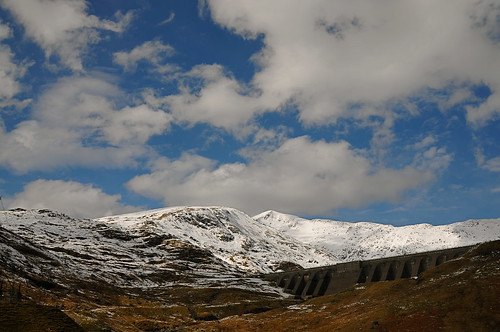 View of The Cruachan Range 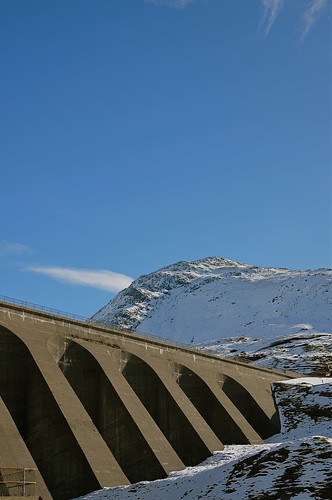 The beauty of the scenery only improves the further into the coire you get. Following last week’s heavy snowfall the snow-line was just below the level of the dam - a fair predictor for a long and difficult ascent. The ascent of the ladder onto the dam is great fun as long as you don’t mind heights. If you don’t, don’t look down 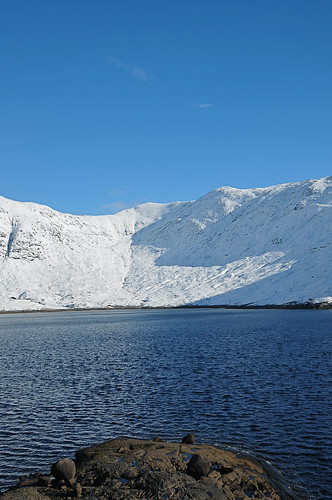 View across the Cruachan Reservoir 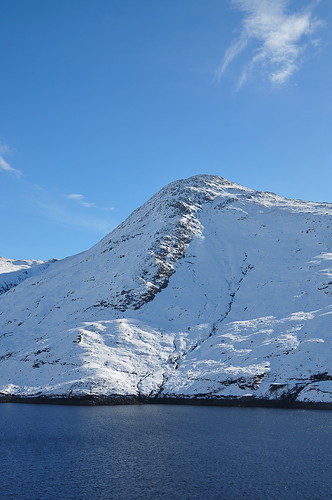 After a couple of kilometres I reached the end of the landrover track at the point the path ascends a coire to the bealach between Meall Cuanail and Ben Cruachan. The view back to the dam was epic. 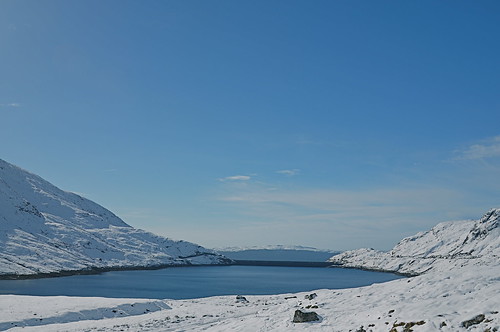 In summer, there’s a clear path up to the bealach, but this was buried with snow in currect conditions. Fortunately someone had descended by this route over the past day or so. These footprints not only provided a route but stopped me having to set fresh tracks through deep snow. (If whoever set them’s a WH member, I’m eternally grateful!

The weather was stunning. Sheltered from the wind, it was beginning to get warm in the coire. The downside of this was the snow began to warm and get soft. This made the route uphill was extremely hard going. Once you put your foot through the firm surface layer, the snow below was like sugar, which meant you sunk to knee depth and frequently slipped backwards. This was extremely frustrating, particularly on the steeper sections. Due to the consistency of the snow, crampons were no help. The only saving grace was that the snow was well bonded and unlikely to slip causing an avalanche.

After a long slog, I finally reached the bealach to great relief. From the bealach the summit was clearly visible (but a long way away). Despite burning quads, I started to head uphill again. The views of Meall Cuanail and over the reservoir were enough to help you forget about the burning muscles. 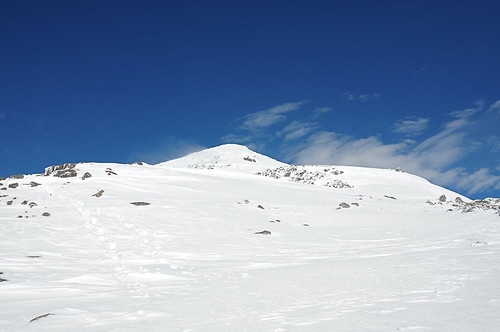 The Way to the Top

Suddenly, the wind that had been predicted by the Met Office hit. Looking across, I realized I was now higher that the peaks on the other side of the horseshoe. Until now, they had been protecting me from the gale force winds scouring Cruachan’s upper slopes. Then, another gust of wind hit, covering me in spindrift. I was grateful for the face and eye protection I was wearing I had to make a decision whether to continue or turn back. 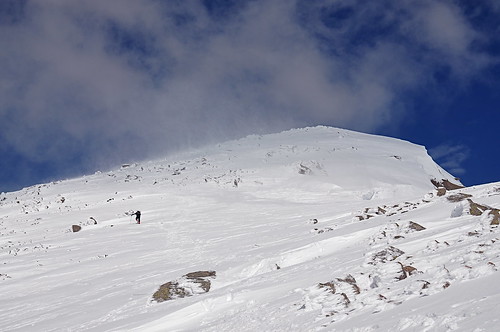 The skies were still a deep blue with few scattered clouds. I could clearly see the summit that was only 100 metres or so higher. I decided that it was safe to continue, but thought that if I stopped again concerned about safety, that would be the time to turn back. With considerable effort and braced against the wind I finally made it to the summit. The summit was entirely featureless with the usual boulder field, cairn and trig buried beneath the snow. The views however, were amazing, with the Taynuilt Peak, Ben Lui and Ben Starav looking particularly dramatic capped in snow. Even the Ben was out of cloud! 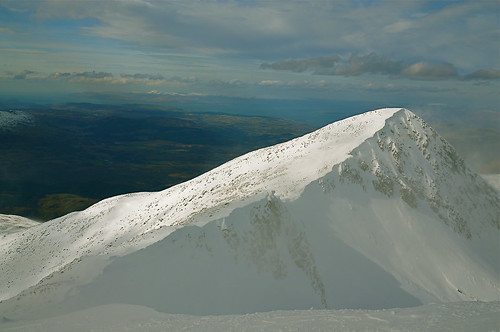 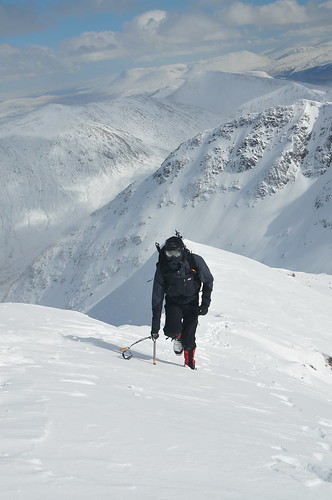 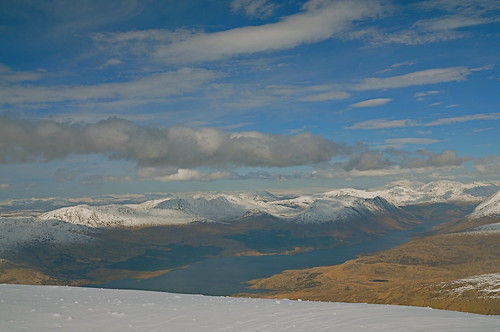 There was no time to stop and admire the view. It was absolutely Baltic on top. Taking my gloves off to use the camera was limited to 30 seconds at a time. Although I had planned on carrying on to Stob Diamh, at this point for me, the decision was easy. I had no option but to descend. The Cruachan horseshoe would have to wait.

I met another walker on top, who after a very brief chat decided to abandon his plan to do the horseshoe too, and descend to the coire. It was great to see someone else, and reassuring to know I wasn’t the only person crazy enough to be on the summit of Cruachan on that day! 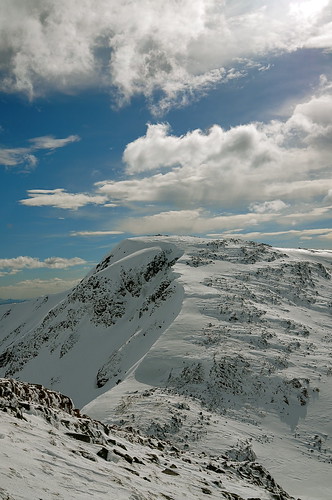 Meall Cuanail on the descent

The descent down to the dam was MUCH easier than the ascent. Having not taken in the second Munro as planned, I had plenty of time to wander slowly down and even practice ice axe arrest and winter skills in the coire. Great fun in the good weather!

Once down below the dam, it was surprisingly warm. I could comfortably walk in base layer and t-shirt – a far cry from the conditions 800 metres further up. I wandered slowly back to the car thinking that, despite the wind and difficult snow conditions, I was extremely lucky to have sat on the top of Ben Cruachan and seen the views I saw that day. 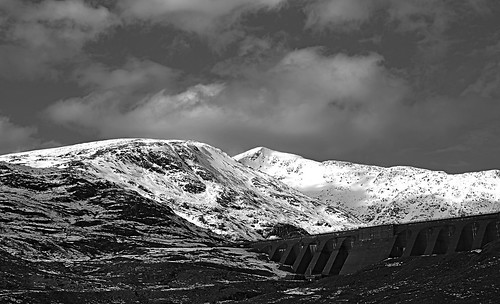 Final view of the Cruachan Range

Just time for a quick pic of a majestic-looking Ben Lui on the way back..... 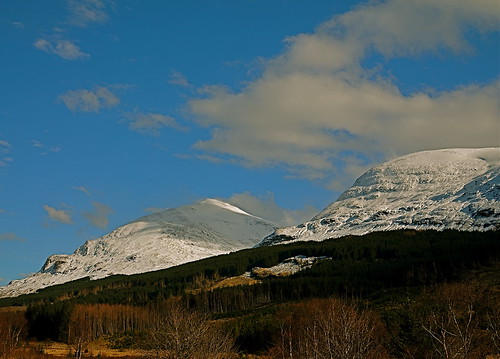 ......and a pot of tea in Tyndrum before joining the usual procession of lorries heading back towards Edinburgh.

Superb! Agree about the wind. I was over on B Buidhe same day and if I'd held out my arms, might have been over with you in a jiff!

Thanks all. Really glad I took the good camera out. Despite having to lug 1.5kg of camera and lens to the top the results made it worthwhile!

Alteknacker - along with crampons / ice axe and snow shovel, the invisible dog's a must-have for winter mountaineering

. That photo's of the other bloke I met reascending to the summit.

. Just saw your report of B Bhuidhe. Looks like you had similar conditions to us. Glad you had a good day though. Love the shots over to the Cruachan range.

cracing report and lovely photos - amazing the difference sometime when sheltered in corries to th ridge winds! experienced this too!!

invisible dog made me chuckle!