This hill has been a thorn in our side for nearly 4/5 years. This was my 4th attempt on it, and even then I actually gave up at one point and decided enough was enough.
Our 1st attempt was very early in our mountaineering career, on that occasion we were actually on the wrong hill. We had meant to climb Beinn Tuliachean that day (the embarrassment) I knew something was wrong, but due to only taking a localised map of a small area I could not figure it out. We got to within 100m of summit that day, and due to ascending directly from the North we could actually see Loch Katrine at the SSW of the summit.
Then as recent as January this year we made our 2nd and 3rd attempts on the same day. Terrible weather from about 300m onwards. We made it onto the East top 798m in white out conditions, the wind was fierce and the hale felt like needles, we decided to head for lower ground and headed down. At about 450m there was a slight change in the weather so we chanced another go. This time we headed up the Centre gully. The final climb out of there was pretty tough as it was well full of fairly consolidated snow plus we were pretty well knackered come that stage. Again we reached the 798m top but come that time the weather was wild, and to make matters worse I realised I had marked the grid line co-ords wrongly on the map. My GPS was not telling me what it was seeing on the map. So with that issue and the atrocious weather we beat yet another retreat.
This time it was a boys only day, Julie could not make it, it would be up to the dogs and i.
Weather was meant to be awful, it would not disappoint. I was virtually soaked through soon after leaving the car. And when I eventually reached the 798m height I felt I could not go on. The wind was the worst that I have ever tried to walk in. I was at 45 deg and unable to walk forward, there was no place to shelter apart from dropping of the south side of the hill; I was pinned down there for about 30mins before deciding to turn back. So back up onto the ridge. I started on my way and after about 10min the wind dropped a bit. That’s when I decided to turn about and go for it. Visibility was still only about 20m but with the summit only about 600m east with about 100m ascent to the top, I just knew today would be the day.
There were times I was totally knackered up there today, the stress of the conditions and the navigation, being on my own and worrying about the dogs can all contribute to mistakes being made.

I did however get only a few pics as I descended for a final time. But again, as the car was reached it had turned bad once again. 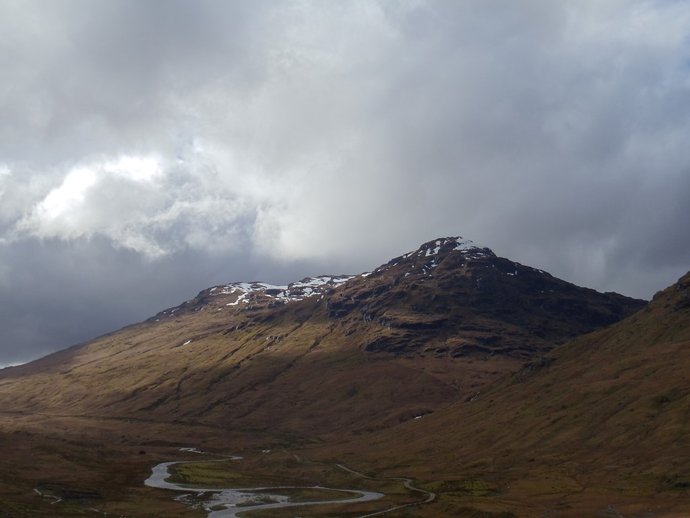 Wilson B a C The Mutts and Stob a Choin Very satisfied with my day.

A tough nut to crack Dave,well done on eventually getting there,was in that area a few weeks ago and Stob a Choin looked pretty hairy covered in the snaw.Did it during last summers heatwave ,the steepness made me curse once or twice at least

And another Wilson fan logging in!

Well done for finally bagging this one! Sounds like the weather was atrocious.

A tough steep climb this one. Love the photo of the two dogs on the track.

Our toughest hill to date by far, for various reasons

Sure would be interesting to start a thread about peoples most demanding day out and why ?