A smaller jaunt than a fortnight ago as the weather wasn't looking to cheery, i decided on the Glen Feshie Munro's.

From Kingussie, i headed along the the B9152 for Kincraig, then Feshiebridge, cross the river and head down to the car park to start from the East of River Feshie, at the car park. After leaving the car at the car park, i headed South down the road to Auchlean where the path begins at a cairn. heading down the road to Auchlean at the cairn, head west

Following the path up through the forest, i headed up the western shoulder of Carn Ban Mor, picking up a path which heads NE, to the summit. Even in mist, the path is well established. 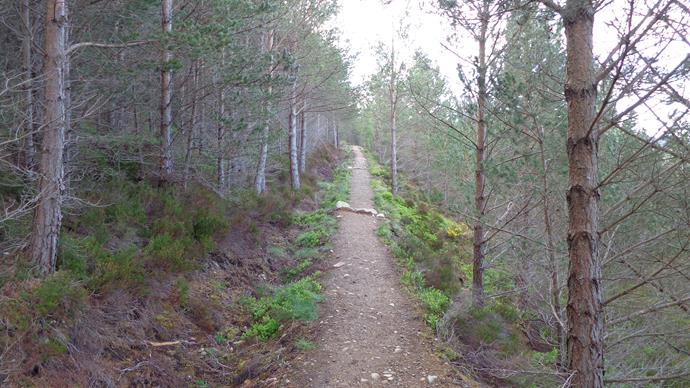 heading up through the forest just kept on the beaten track as it was clear and i could see the summit of Sgor Gaoith, i cut over the NE, making a direct line for the summit

Following this line, i picked up the path again which leads up to the summit. As the ascent was wide, flat and featureless, i was surprised to see some crags on the summit. the viw of Loch Eanaich was stunning. As the cloud was coming in and the wind was picking up, from the SE at quite a pace, i headed SSW for the shelter on Carn Ban Mor (Munro Top) to bag the next Munro of the day, Mullach Clach a'Bhlair Again, heading S, SSW, the ground was featureless and i had the fortune of the mist not being too thick heading S then SSW, on route to Mullach Clach a'Bhlair

After i lost a bit of height, the mist cleared then i picked up a track heading right (SSW). I followed this track where i came upon a cairn. Beared right at the cairn which lead me onto a well established "land rover" track. bearing right at the split in the track headed right at the cairn (SW) heading along the "land rover track"

I kept following this track for around 3k to the junction with a track coming up from Glenfeshie Lodge. Turned left at the junction, onto another well established track, where i beared right (S) at another small cairn which leads to the summit of Mullach Clach a'Bhlair after bearing left at the junction, a cairn is approached. bear right to head for the summit of Mullach Clach a'Bhlair From the summit, i headed back down to the earlier junction from Glenfeshie Lodge and headed W / SW which is another well established "Land Rover" track.

Heading down the track, you have 2 options. Either come of the track and onto a faint path heading west above the edge of Coire Garbhlach, to the summit of Meall nan Sleac (the route i took), or head round and down a much longer path back to Auchlean. If you go over Meall nan Sleac, head NW down heather (brutal on my knees and ankles) to cross the Allt Garbhlach where you'll find a path is followed though the heather to the forest and back to Auchlean. heading down the track, either bear left for a longer route, or head up and over Meall nan Sleac looking North from the summit of Meall nan Sleac heading NW for the trees and Auchlean

As I reached the water at Allt Garbhlach, it is difficult to cross in spate but manageable. Just find a spot where there's boulders to cross the crossing of Allt Garbhlach

Once i made it over Allt Garbhlach, heading NW, i found a path through the heather which eventually took me to a more established path heading for the bridge at river Feshie. I turn right (N) and headed up East of the forest, back to Auchlean and the car park. On the way back, there is another river crossing (Allt Nam Meann) to cross which can be difficult in spate but there is some logs and boulders which got me over without any problems. the crossing at Allt Nam Meann

After crossing Allt Nam Meann, follow the path where you'll come to Auclean House and a tarmac road. Follow the road back to the car park.

A nice day out and 2 Munro's bagged

That's some walk! Well done you

We've done both these Munros....but on completely separate occasions. Sgor Gaoith looked pretty bland on the approach (I do remember that it was quite a pull towards the end) but SO worth it for the spectacular view from the summit down towards the loch. At least you didn't have mist for Sgor Gaoith!!!

Very good descriptive report, funnily enough I had OS43 out & was thinking of heading up that way during the week (weather permitting)

Will print off your route & hopefully give it a shot

I bagged these two on Saturday (17th).

The views from Sgor Gaoith down into Loch Eanaich are amazing! What a fab spot for a bit of wild camping!!

Must say, if I was to do it again, I would defo recommend a straight up rather than veering NW across Carn a Ban. So in effect, roughly a ‘T’ shape route. So, from Feshiebridge / Achlean, as follows:

@Lightfoot2017, i did these on 17th also. i didn't click "select date" when publishing report

check the timestamp of when report submitted to forum.

i left car park at 07:15am and there was a couple of cars there. maybe one was yours? did you meet the 2 chaps who were doing the TGO challenge? jonathon was one of them? each to their own on route planning. i was just as well getting Meall nan Sleac while in the vicinity

I left the car park relatively late in the day (9.20 a.m). I got lost trying to find the start point,

and went down a forest track on the West side of the River Feshie, down past Ballintean. Eejit!!

I saw a few folk on the hill on Saturday, but didn’t really stop to speak much, other than a quick ‘hello’ in passing. By the mid afternoon, it wasn’t the weather to be hanging about on the hill socialising!