Don't you just love it wwhen a plan comes together?
Weather forecast duly checked & Saturday looked like a good day to get out, so an optomistic post 3 days before the walk & couple of volunteers to join me

First time I had met Simon and to say he has a bit of knowledge regarding the Scottish Munro's is a massive understatement, not only can he reel them off perfectly (with rolled R's) but knows where they are & whether he has climbed them

That from a fellow Englishman was impressive, especially as most of us can only pronounce the easy ones

As is the norm for me at least, I always wake up ages before the alarm on my phone is due to go off & decided to leave at 5.30am that would give me plenty of time to dawdle along to Spean Bridge where I had arranged to meet Karen at the "Commando Memorial" near Spean Bridge at 8.30. As I suspected I was rather early & arrived just after 8am & that was after driving with the cruise control set at 59mph (exactly). For all you camera enthusiasts I decided to count how many "average speed camera's" had been installed so far, let's face you need something to keep you alert when the cruise control is on, anyway there are 7 installed & 'under test' between Perth & Pitlochry, not sure how an odd number of camera's works

We all met up on the 'grass verge' at Kilfinnan just before 9am, we were the first cars so had the pick of the parking spots, which is not a bad thing.
All kitted up we set off shortly after, nice and dry but a wee bit muggy, with low cloud, the midges hadn't woken up yet, they must have a lie-in at the weekends The marina where my yacht was moored

The path/track is excellent through the forest for a couple of Km & for those of us who like to save a bit of energy it is superb to cycle on as it is part of the 'Great Glen Way'. Once you turn right at the boulder & fence post the path uphill is stones & boulders, but easy going under foot. A fine example of the quality of the path up through the woods, in fact it continues up to the bealach The walk up to the bealach is a nice gradual climb, however as soon as we stopped the midges (who were now active) were becoming a little bit of a nuisance, as a result the number of stops were limited & short. I was struggling a wee bit going up as am still trying to get rid of the manflu that has now been annoying me for 2 weeks What a pair of muppets, note the low cloud in the background 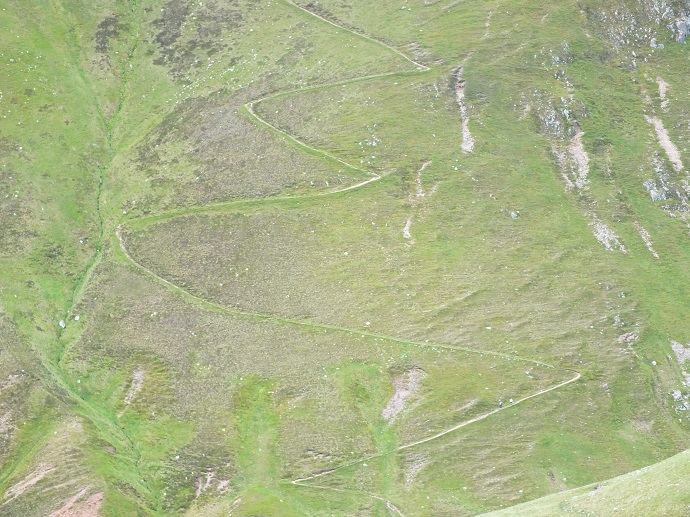 The zig-zag path up to Sron a Choire Garbh

The zig-zag path up to Sron a Choire Garbh was easy going and as usual just before you reach the plateau ridge the path just disappeared, it was laft turn on the ridge & the summit was marked by a nice little cairn. Took us just under 3hrs to the summit

Sron a Choire Garbh summit is almost in the centre of a horseshoe shaped flat ridge & the views were superb, especially as the low cloud has dispersed for our arrival Loch a' Choire Ghlais and beyond from Sron a Choire Garbh The extended ridge NW of Sron a Choire Garbh One of the few views we got of Loch Lochy

So it was down to the bealach, then up to another bealach & then onwards & upwards to Meall na Teanga.
The summit was reached 4 & half hours after the start, the only problem was the cloud to the east was obscuring any view at all, hence the earlier shot of Loch Lochy. We lingered on the summit in the hope that the cloud would move on, but we were unlucky Summit cairn, Simon either admiring my rucksack or wondering why is it so big The edge of the cloud Any suggestions as what this was, trying to get into my rucksack?

The walk down seemed to take an awful lot longer, we also encountered a few showers & judging by the cloud formations these 2 hills seem to have there own little micro climate.
Just below the bealach we met Chris who was trudging uphill in full waterproof gear & looking a bit bedraggled, up till that point we had only had a couple of brief showers, but as we descended we could see why Chris was kitted out the way he was. We went through a couple of hefty showers, that cleared as quickly as they arrived

A great day on 2 superb hills, next stop for me at least is Glencoe tomorrow 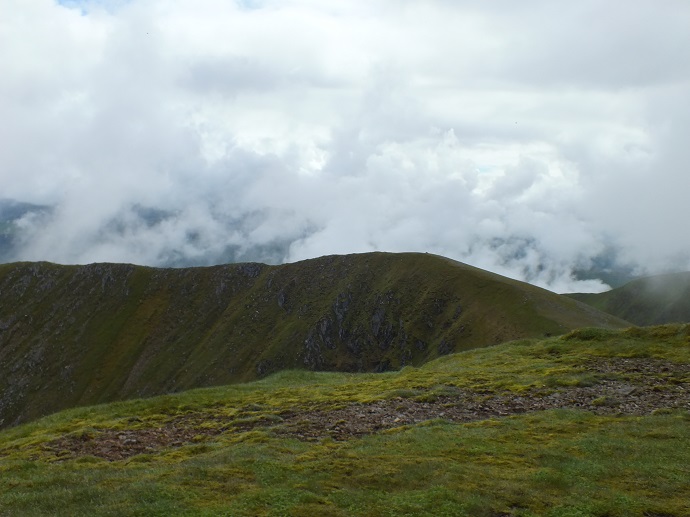 Looks like a good day out with some nice views, I take it the weather held out then??

MunroMadMen wrote:Looks like a good day out with some nice views, I take it the weather held out then??

Yes & no, views from the summits, albeit a bit restricted. Was a bit warm & muggy for me

already dug the shades out Nice report, Martin, thanks. I'll only add that I had a crackin' day, although I'm looking a bit like a fidgety contortionist today, as I scratch at many midge bites.

Not directly walk-related, but my early-morning drive through Glencoe was absolutely stunning. It's a wonder I managed to make the rendezvous point on time, given the many photo stops.

We were there on Saturday as well. Left the car park at 10.20. so you beat us by a bit. We were soaked on the way out

so you had the best of the weather. Hope you did OK in Glencoe it was wet and misty when we passed through it at 10. 30 am today.

It was a great day, Martin. Thanks to you and Karen for the company. You got some really nice pictures of our trip.

I got a fine view of Glencoe from Eastern Fersit Munros today, you must have had a cracking day if you were there.

Looks you had another good Martin. Good little report.
And, just for the record, I can confirm that your backpack, is indeed on the large side

MG1976 wrote:And, just for the record, I can confirm that your backpack, is indeed on the large side

Used my old one yesterday & felt so much lighter, will need to rethink my future strategy