The observant among you will have noticed that I have had a busy week, Glencoe on Monday & after checking the forecast posted in the meets bit for a day out next to Loch Treig. Karen volunteered to accompany me so after a couple of PM's we arranged to meet in Callander & I would be the chauffeur, leaving Karen's car in the long stay car park. As usual Karen was early, she didn't actually tell me what time she arrived at the car park, I was there 10 mins before the scheduled 7am meet

Just after Spean Bridge heading east on the A86 I was aware of a silver Toyota Yaris trying to climb into the boot, so being a considerate motorist (as I was driving at 50mph) I pulled over & who should be in the Yaris none other than Simon-B, who took what seemed like ages to overtake

It was only when he was alongside that I twigged

I knew he was planning to conquer Creag Meagaidh & as it turned out that was where he was heading, another 3 to his tally, what a week of weather you brought north with you The end of the road at the car park Once we were kitted up it was then decision time, do we follow a path heading upwards through the grass, follow the track towards the dam or go back to the wee loch as per WH?
So the map was out, compass was out, WH route was out & in the end we opted to go up the wee path into the undergrowth.
All was going OK as we knew we had to cross the tram line, we arrived at that obstacle, however there was a new(ish) fence with barb wire along the top in our way. So after a brief discussion, it had to be brief as we were becoming food for our eating friends, we decided to climb over the fence, very carefully - especially as I was wearing shorts for the first time this year

So after that hurdle we continued wandering upwards through the ferns & long grass hoping to stumble across a path, we were heading towards the ridge that was obviously the way ahead. We were being watched carefully

We did eventually come across a path which led us up to a very large trig point, am sure someone will explain why it is positioned there & why so big? It certainly made up for the lack of trig's on the summits Building on the edge of Loch Treig, any suggestions? Looking back to the car park, with Loch Treig to the right Photo doesn't show how daring I was The long ridge up to Stob a'Choire Mheadhoin, note the lack of path's

There is a nice little scramble up the buttress Your first thought - how are we going to get up there

It is quite a long walk along the ridge to the first summit of Stob a'Choire Mheadhoin. The descent down to the bealach towards Stob Coire Easain was straight forward, on the bealach we met a chap who didn't speak very good English he had been up to the summit & said his wife was waiting on the scree slope for him & they were staying in a bothy heading towards the Grey Corries. We never actually saw him descend, but the way down looked pretty scary, either loose scree or snow that looked like very unstable.
The ascent of Stob Coire Easain was fairly easy & didn't take very long, not quite sure how these 2 are classed as separate munro's One of the few obvious paths! The selfie on the summit of Stob Coire Easain

One of my recent purchases was one of those flexible plastic tripods & as I had carried it all the way up 2 summits, I decided it was time to give it an airing

I was also quite proud of myself as I had read the instructions for my camera, just the relevant bit (of course), so the camera was set up & I had 10 seconds to dash into pose position, which took 2 attempts, but we won't go into that The face of concentration 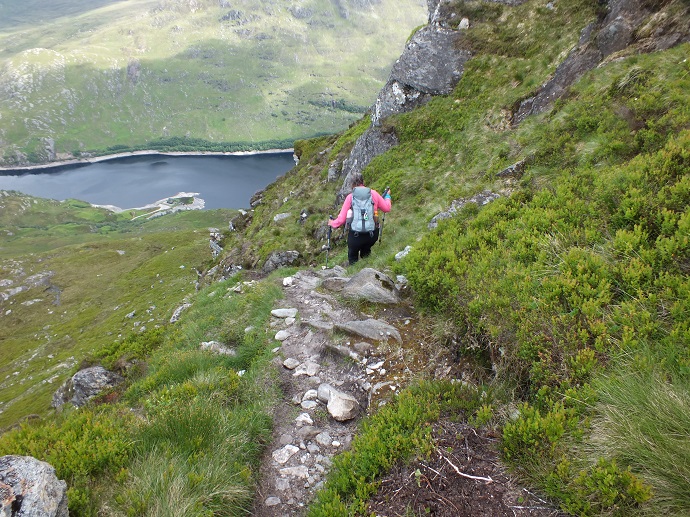 Once off the ridge we reached the large trig & decided to follow the path, the other option was to head towards the track at the edge of the loch, which looked doable

Yet another great day out in good walking weather, bit breezy & the occasional spot or two of rain, Karen made the executive decision to leave the waterproofs in the bags, turned out to a good one

Thanks to Karen for her great company & of course dinner at the Kings Hotel in Glencoe, my first visit there - Karen is a regular & knew her way through the hotel

Aye your getting into the habit of a Munro Bagging Martin

Another good day on the hills!

The Rodmiester wrote:Aye your getting into the habit of a Munro Bagging Martin

Another good day on the hills!

Been a busy week, still got a report for todays walk (Gairich) & Gulvain tomorrow to do

Midges weren't a problem once we were moving, we were too fast for them

Nice one, FF. But paths....if you're anything like me, even if there are paths I can never manage to stick to them as I keep losing them

- sometimes better if there aren't any, then I don't spend time trying to find them - cheers

Doesn't he do well? Both at ticking off those hills, *and* at writing great and timely reports!

Many thanks, Martin, for good company on another great walk -- and for being the chauffeur -- what a treat to RIDE through Glencoe without having to keep at least one eye on the road.

rockhopper wrote:Nice one, FF. But paths....if you're anything like me, even if there are paths I can never manage to stick to them as I keep losing them

- sometimes better if there aren't any, then I don't spend time trying to find them - cheers

Today I blame Andy, as he has broad shoulders & was leading on the way up Gulvain

Yesterday can't blame anyone else as I was solo, went well off track coming down, but rescued the situation

kmai1961 wrote:Doesn't he do well? Both at ticking off those hills, *and* at writing great and timely reports!

Many thanks, Martin, for good company on another great walk -- and for being the chauffeur -- what a treat to RIDE through Glencoe without having to keep at least one eye on the road.

I'll pay you next time we meet for the kind comments. Got me thinking I have never been a passenger through Glencoe, that would be a real treat

For these, I started at a small parking spot nearer An Dubh Lochan, which allowed quicker access to the ridge. I was walking with a companion who was wild camping, so we came down by what sounds like your ascent route so he could speculate for a camping spot near Fersit. That 'path' does involve something of a battle with undergrowth, as you say.

Well done also for romping onto 153, you certainly brought the decent weather

I'm amazed how many times I lose a path on the hill and then randomly find it again. Reckon there must be some logic to them being where they are in relation to the lie of the land... or something.

Love the photo of the stag thinking you can't see him keeking over with that big head of antlers on show!