Yet another pre-arranged walk via WH, yet another new face/name for me to remember (not easy when you are retired

).
My walking companion today was Catriona (cmarcol), we had arranged to meet in Perth & car share as Cat was travelling from Dundee & it was just a crawl up the M90 for me to the Park & Ride at Broxden.
After our introductions we agreed to head through in my car & after a comfort break in Crianlarich we arrived at the layby near the cairn in Glencoe just after 9am.
So we kitted up & Cat then realised she had left her poles in the boot of her car

Being a gent I did offer her one of my poles

The weather was forecast to be low cloud, humid & drizzly which would worsen after midday & was actually fairly accurate. We couldn't see a single summit in Glencoe, but being hardy soles we just romped up the path which really is just like walking up ones stairs at home, obviously a wee bit dirtier & damp around the edges

It must have taken some amount of time & construction to create the path, one thing it made descending very easy & pretty rapid

Due to the low cloud I didn't take many photo's, so don't expect a photo feast

After we left the car park we headed up the path which came to a fork so Cat checked her phone & we headed left uphill, that was the only time we needed to utilise the technology, maps were not required at all

We were following a chap uphill who was walking at about the same pace but he was probably about 5 mins ahead, so we tried to keep up & at the bealach we all turned right & headed up Stob Dubh. There were a few false summits but the climb was straight forward & fairly easy going.
As we eventually reached the summit the chap we had been following was sitting comfortably & I instantly recognised him (David), we had met on Sunday on Gulvain - what a small world

So after a wee chat David joined us & we headed back down to the bealach & then up Stob Coire Raineach. The path up was a bit more eroded & a wee bit steep in places & I had made a mental note that it would be fun when descending 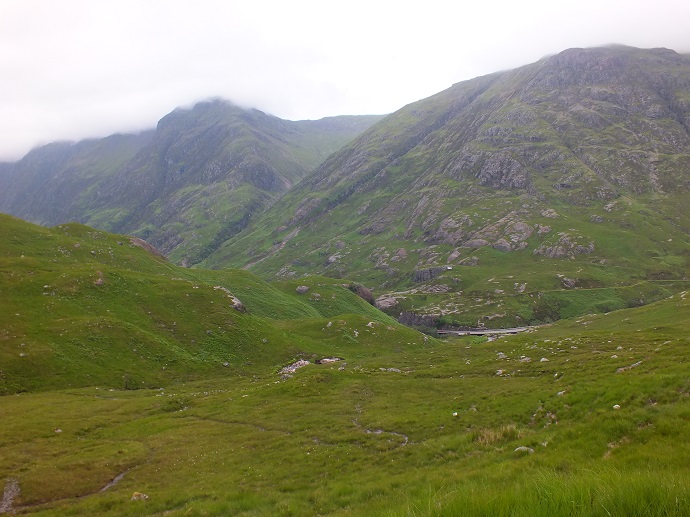 Looking across the ascent of the Aonach Eagach Example of the path on Stob Dubh in the clag Looking down through the clag to Lairig Gartain Stob Coire Raineach a brief break in the cloud Lunch on the summit of Stob Coire Raineach

Once on the summit of Stob Coire Raineach it was perfect timing for lunch, however the midges & other insects appeared out of nowhere & decided to interfere & make the lunch break a bit quicker than we wanted

The descent down Stob Coire Raineach was interesting, there seemed to be umpteen paths and it was then a matter of path selection, not something I am used to as my speciality is losing paths

Once down at the bealach the descent from there was rapid, looking back we didn't stop at all on the descent, drinking on the hoof

We arrived back at the cars in 4 hours, Cat was really impressed and came to the conclusion that she is fitter than she thought

Nice to meet David, from Liverpool who I advised to register on here, he confessed to being one the hundreds of lurkers in the background, have a safe journey back down south mate

Don't forget next time you are heading north (next year) give us a shout, someone will no doubt keep you company

Another great day, was much easier than I had expected, next port of call PUBLIC TRANSPORT, something I am not very familiar with

Corrour on Saturday, bring it on

Shame I wasn't there to blame for the weather.

2 Munros in 8 hours? Will pick this walk off next week, nice!

AJNicholls wrote:2 Munros in 8 hours? Will pick this walk off next week, nice!

Enjoyed today - was nice to be home well before tea time for once! Would quite like to do this one in winter!

Good to meet some more walkers and will no doubt see you out and about again soon!

Something wrong with my typing I think. Or my brain.

Nipped up there this morning to fit something in before the 70mph gusts hit that are forecast for this afternoon. I did it in 3h 10m including a few stop & chats, so I reckon the WalkHighlands guide time for this walk is a bit overly generous.

AJNicholls wrote: I did it in 3h 10m including a few stop & chats, so I reckon the WalkHighlands guide time for this walk is a bit overly generous.

It could be that you are a bit of a mountain goat, binoculars would be handy to keep you in sight

Glad you enjoyed the day

Oooh, such a shame you missed the views... We had a smashing half a day on BEB a few weeks ago, without the clag it's a cracker. We're actually hoping to do it again in winter conditions.

We took just over 4 hours to tick the 2 Munros, but we sat on Stob Dubh for 30 minutes or so plus stopped every 10 min to take pictures. I guess if you don't linger for too long it can be done in 3-3.5 hours.

I just read your Gulvain report - we climbed it on Thursday the 26th, report is still work in progress