Reading Houdi's report a few weeks ago...
http://www.walkhighlands.co.uk/Forum/viewtopic.php?f=16&t=19820
...reminded me that I've wanted to do Clogwyn y Person Arete and The Parson's Nose for some while now.

I went through the results of the MRI scan of my grumbling knee on Friday, and the good news was that it wasn’t the feared cartilage issue. And it seemed like the cure was going to be some physio coupled with a progressive increase in the arduousness of walks (rather than going straight into very long strenuous days). So I was keen to get back into the hills, even if for nothing too big.
But due to family commitments on Saturday evening and Sunday, it wasn’t going to be possible to get up to Scotland – so the decision was to try some of the purportedly high quality scrambles around Snowdon that I haven’t yet done, namely those around Crib Goch. No planned route, other than including the Jammed Boulder Gulley of Dinas Mot, and the Parson’s Nose with Clogwyn y Person Arete.

MWIS had some auspicious things to say about the weekend weather, particularly early on Saturday. So Saturday it was.
A 04.15 start saw me parking up by the roadside at Pont y Gromlech at 06.15. Only half a dozen vehicles already here. Being weekend, it will be full by 07.30.

After rather neglecting Snowdonia in favour of Scotland for the last couple of years, the first emotion on looking down Llanberis Pass was surprised pleasure at how wonderful it is: different to the Highlands of course, but in its own inimitable way, equally spectacular. A sudden surge of excited anticipation: this was going to be a great day! 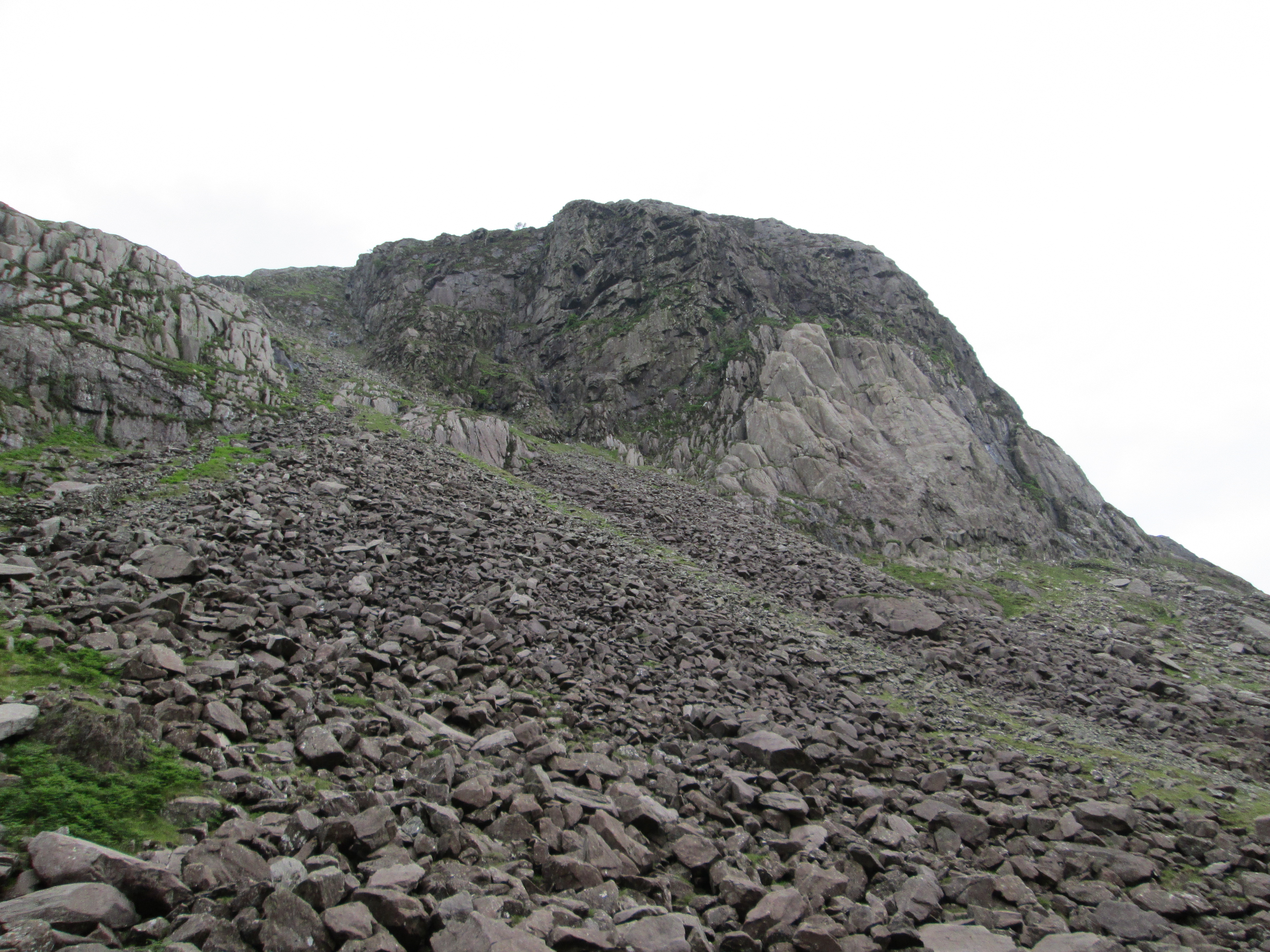 IMG_0534.
My guidebook - "Scrambles in Snowdonia" ("Suicide in Snowdonia" as a local guide I know calls it) directs one to traverse to the right below the huge trapezoidal slab of the wonderful Dinas Mot 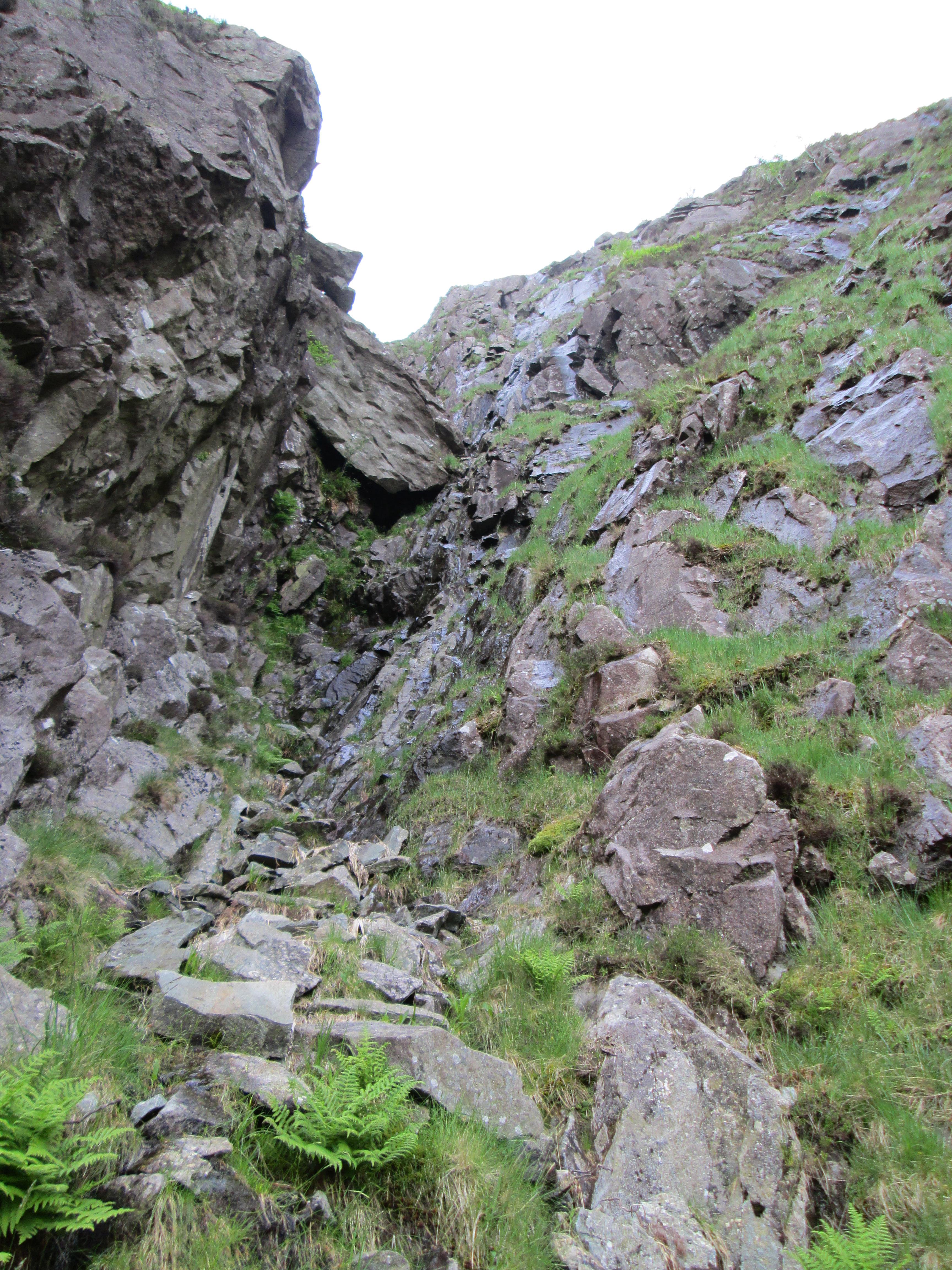 IMG_0535.
After a short while a couple of gulleys appear: Jammed Boulder Gulley is the one to the left. 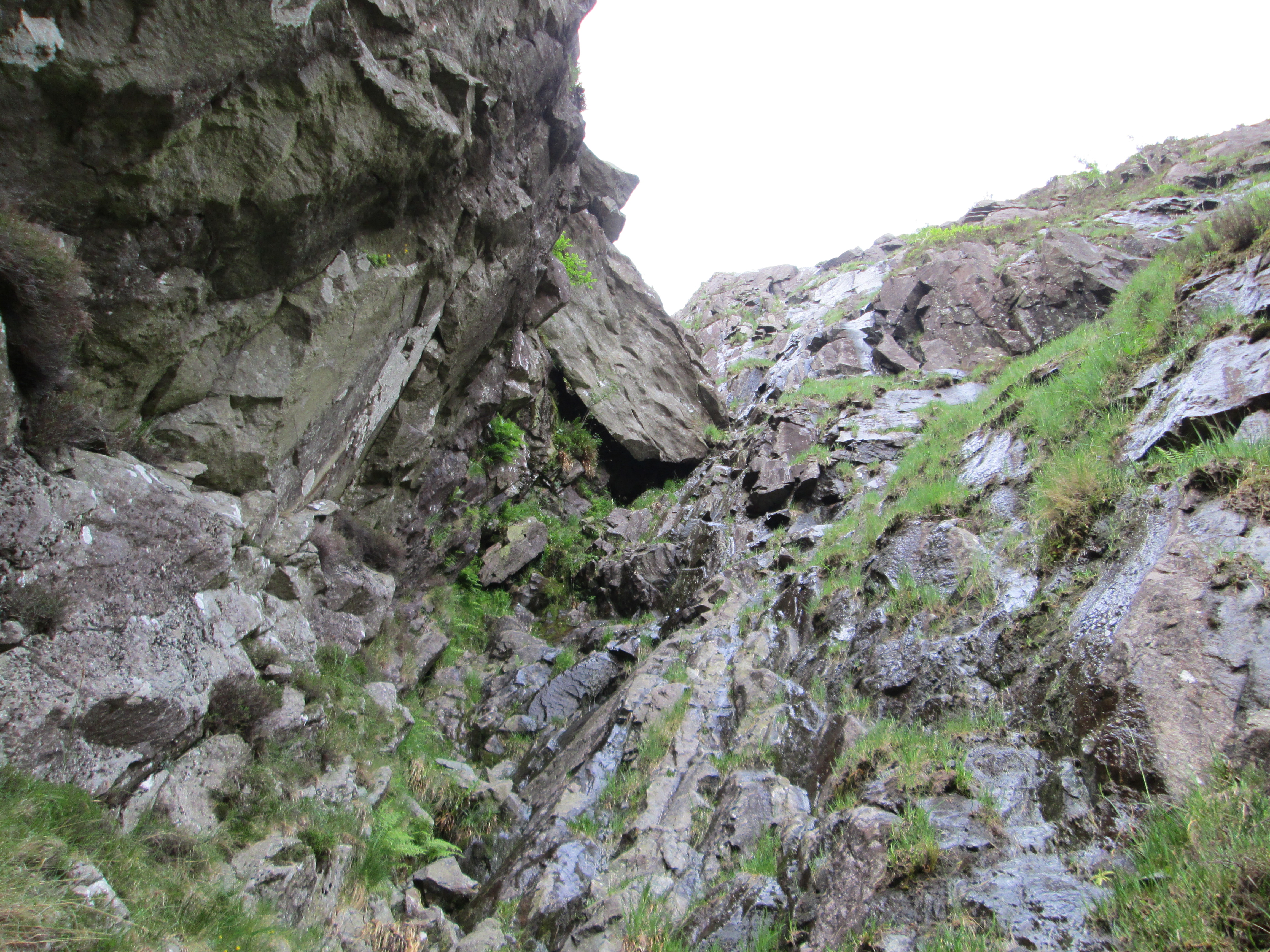 IMG_0536.
You can see the huge jammed boulder - more of a slab really - in the centre of the pic, hanging at a seemingly impossible angle. This pic is a bit deceptive - the gulley is steeper than it appears here.

The scramble up the gulley doesn’t look particularly difficult; and if the rock was dry it probably wouldn’t be. In fact most of the rock was pretty wet, and much of it algae-covered, so finding a secure route up to the boulder was quite tricky. My experience on this day was that this and the cave are the cruxes of the route.
“Suicide in Snowdonia” suggests that there is an alternative ascent to the right side of the boulder, but it is “…not recommended in damp conditions”. Unfortunately it looks as if the gulley is always damp

So a squeeze underneath the boulder it is. And what a squeeze! I’m neither big nor bulky, and I had real difficulties getting my chest through the gap. It’s reminiscent of the cave on the Chasm Face route below Glyder Fach (which was so tight that I was unable to get my rucksack through it!). 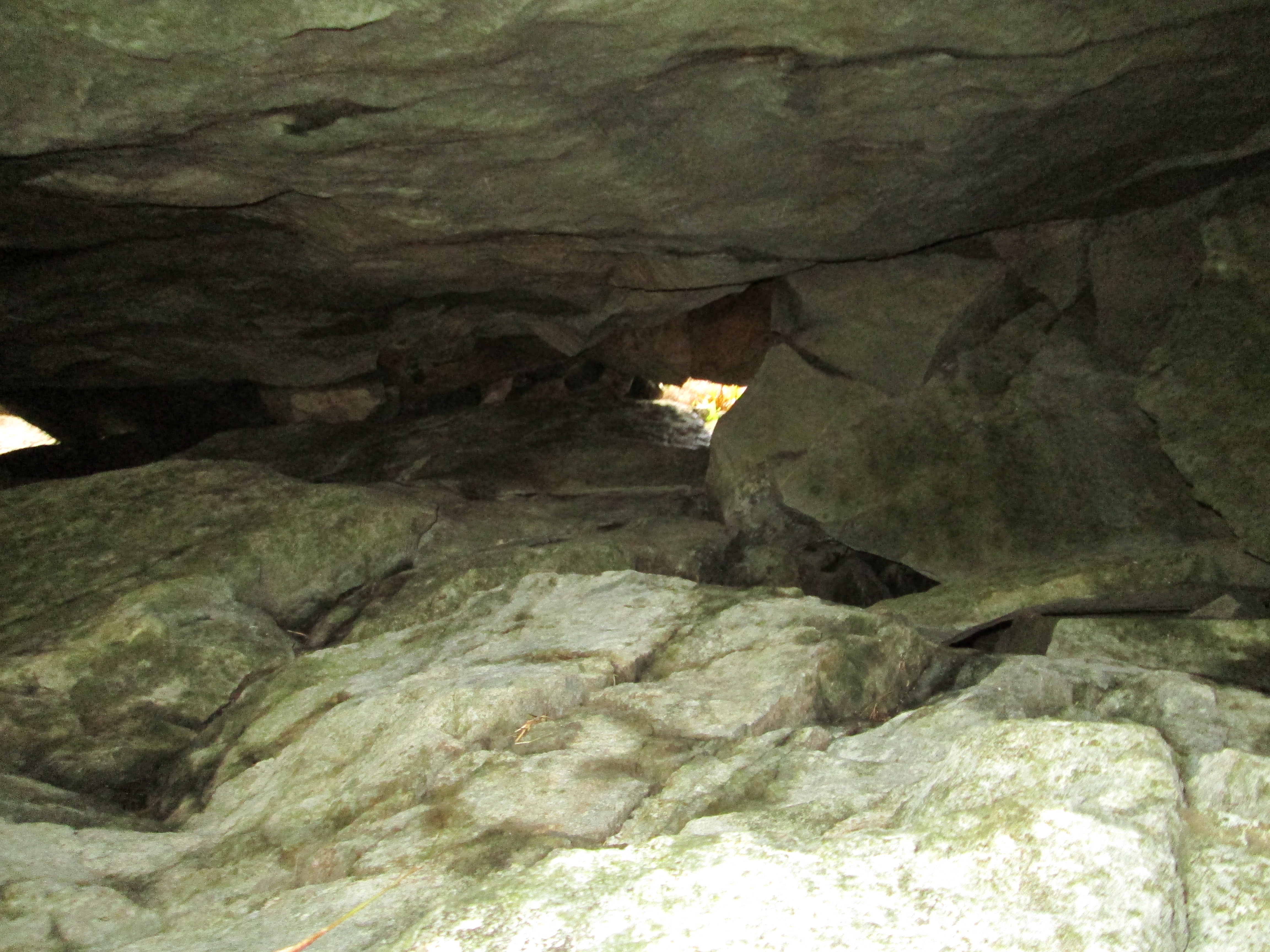 IMG_0537. View inside the "bottomless cave" formed by the boulder. The ascent looks quite straightforward on the pic, but it isn't. There's a lot of exposure behind, and foot and handholds are quite limited once you're inside the "cave".

Several bits of tat and a wire edge anchor inside the “cave” bear testimony to the difficulty of the climb. 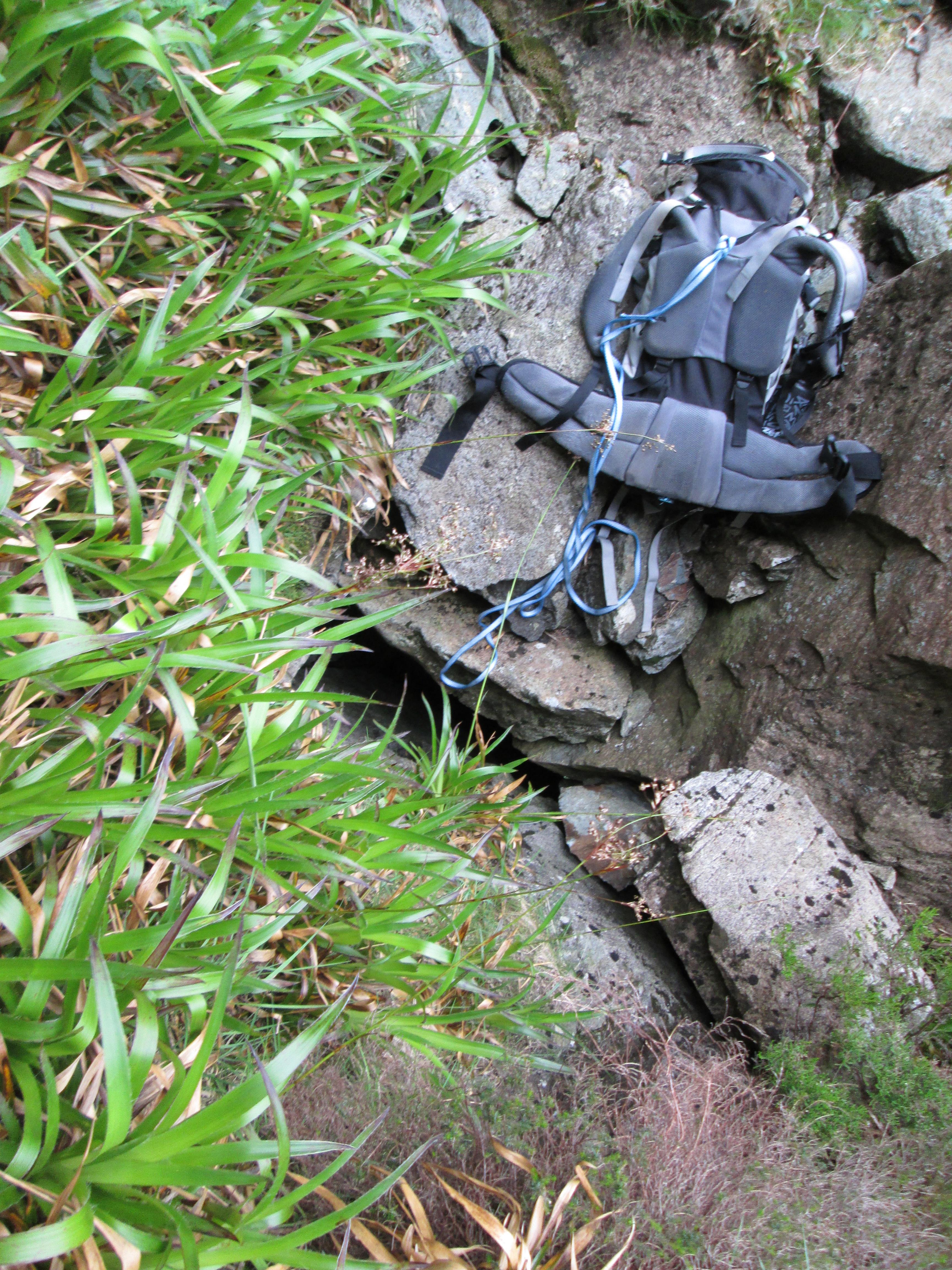 IMG_0541. In this case I had to pull the rucker up after me (that's what the piece of tat attached to the rucker was for!). The exit is the dark area to the lower left: it's pretty clear how tight it is! 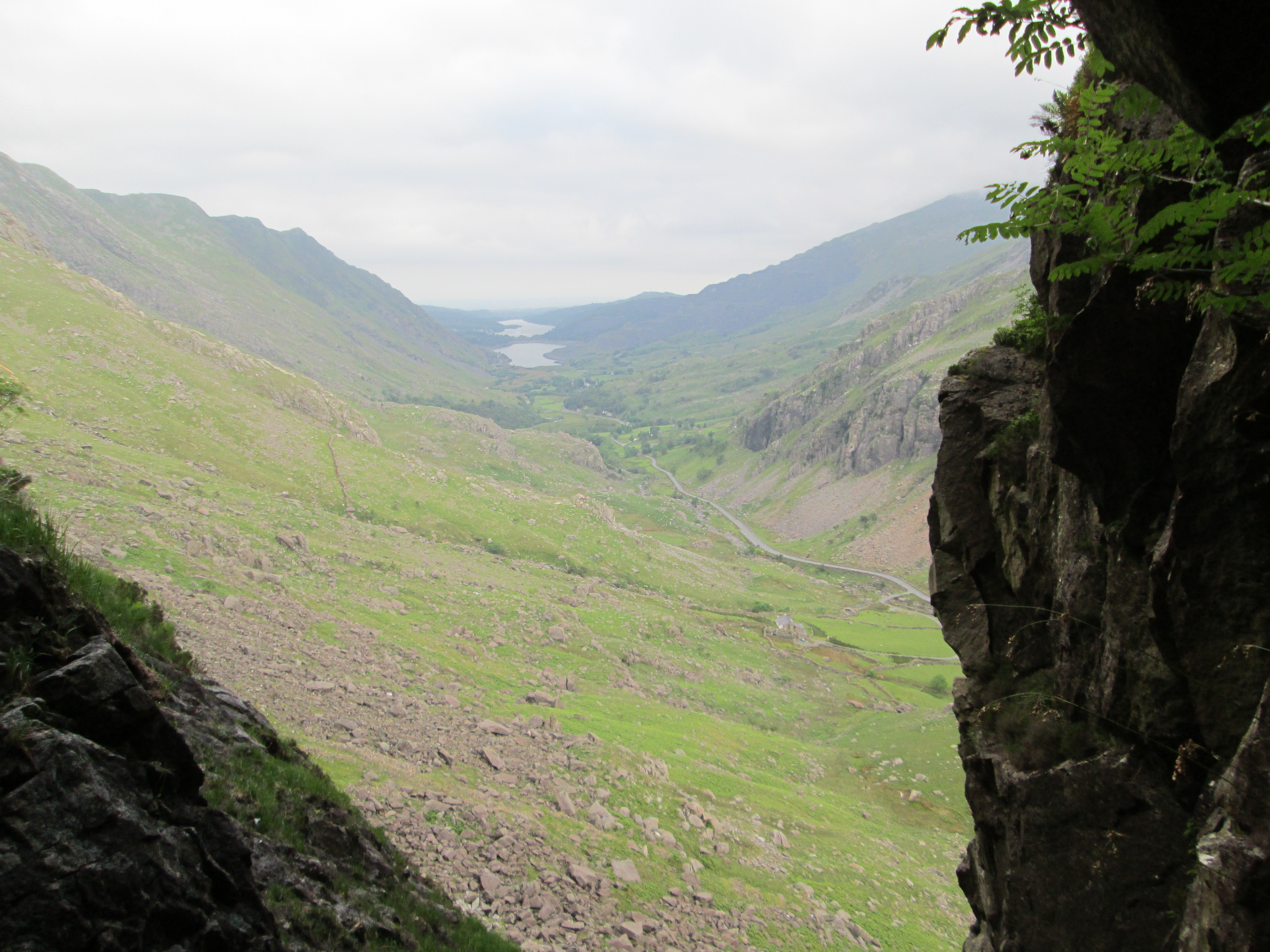 IMG_0538. Once on the bay above the boulder, one is treated to a wonderful view down Llanberis, all the more spectacular for being framed by the steep cliffs either side. 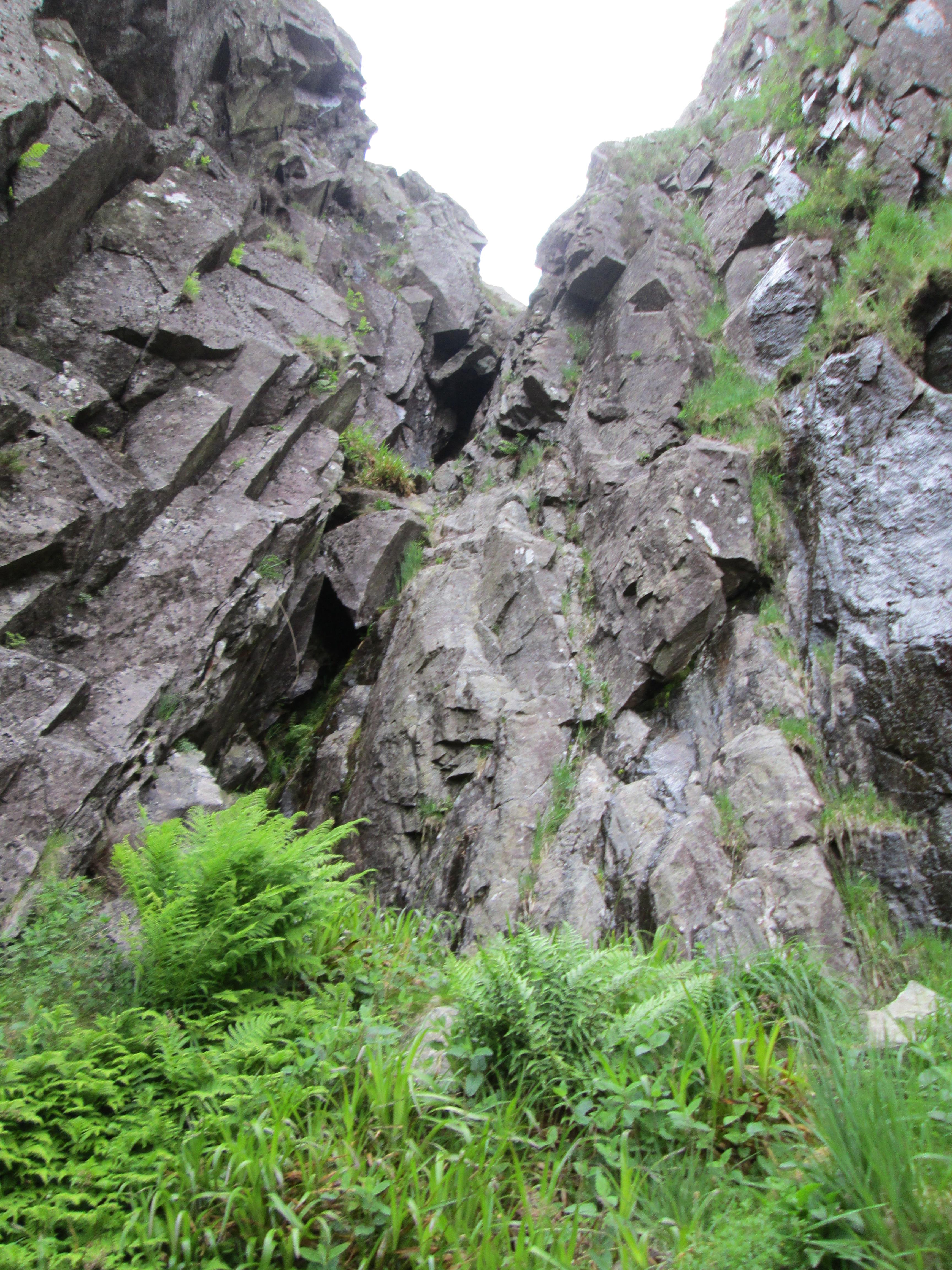 IMG_0539. Moving on upwards, the scrambling is easier, although the rock is still rather damp. People have left some permanent belay points here also, but they're not in a condition that recommend their use. 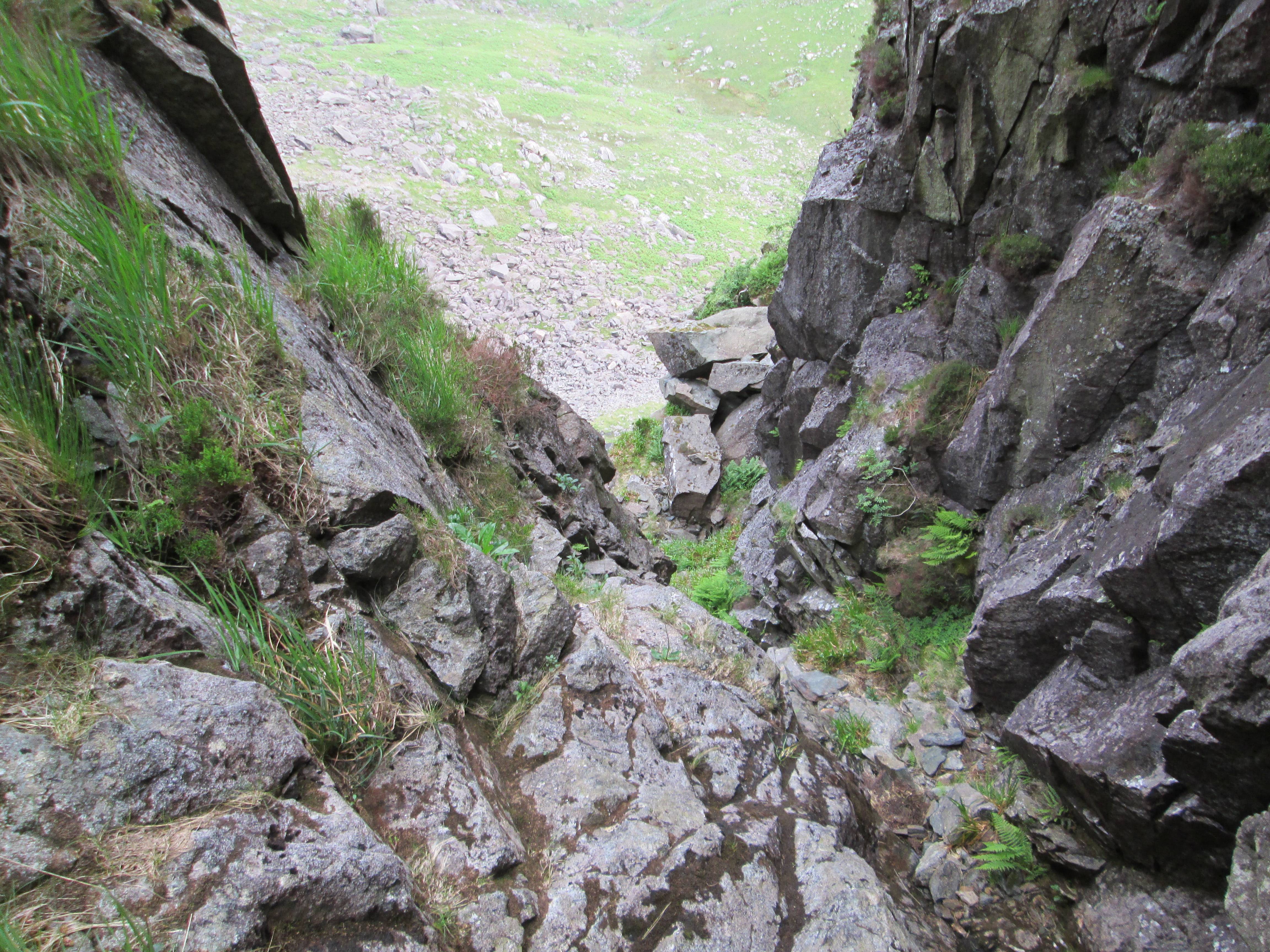 IMG_0542. View down the gulley from well above the Jammed Boulder. 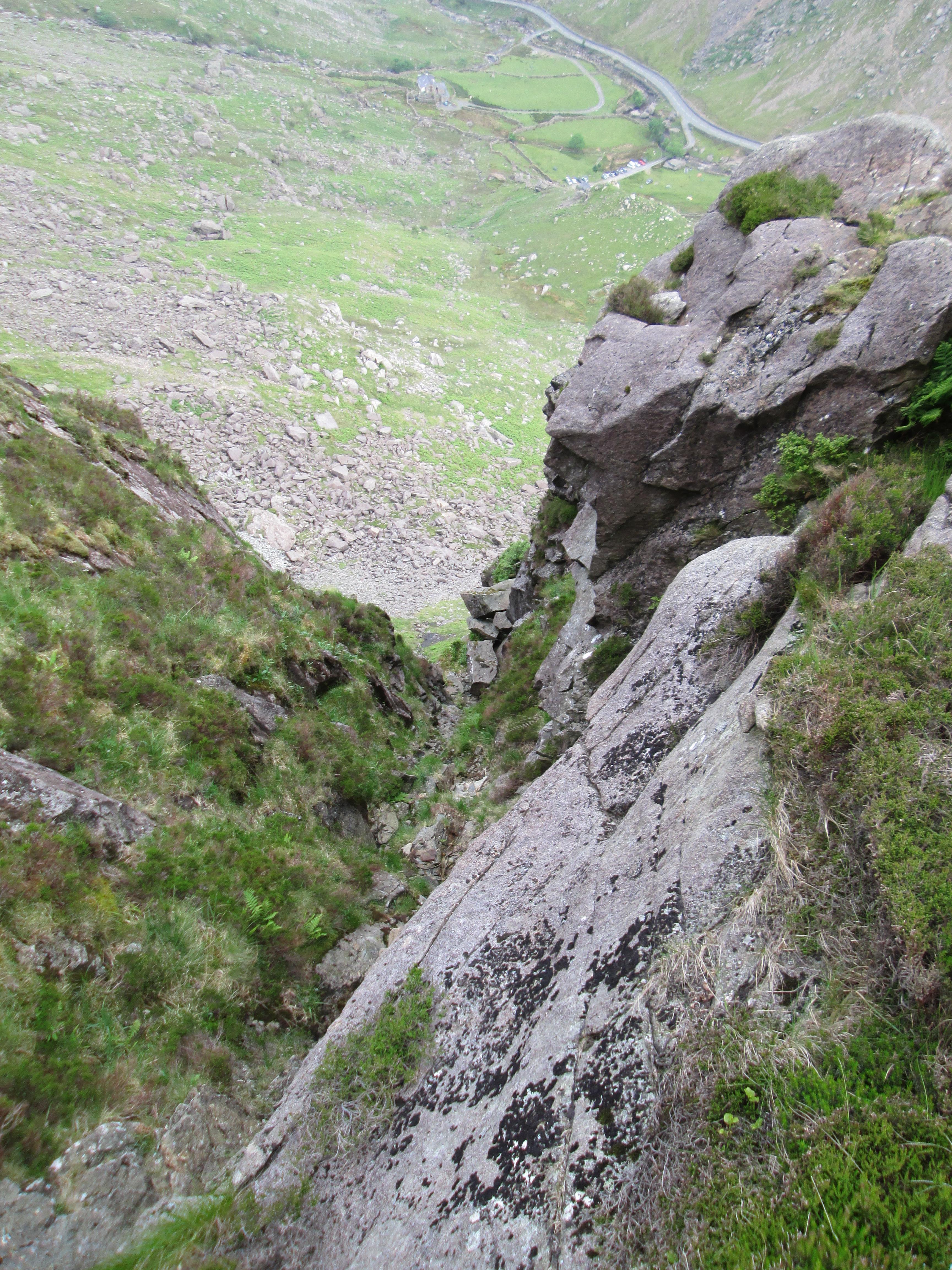 IMG_0543. Looking back down the gulley from where it ends. 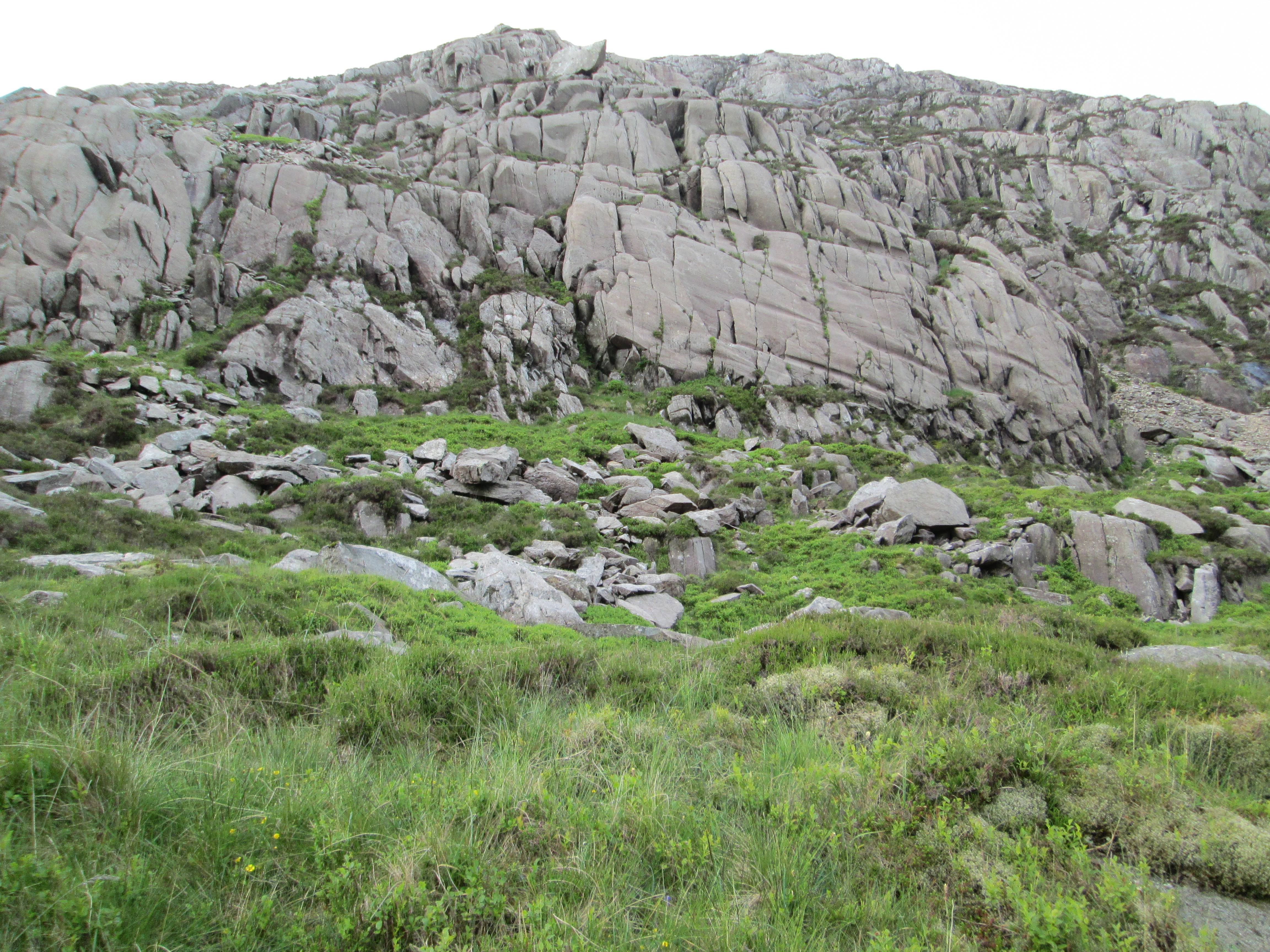 IMG_0545. Looking in the opposite direction up towards the start of North Ridge: lots of easy but still highly enjoyable dry rock scrambling. The only problem is one of too much route choice! 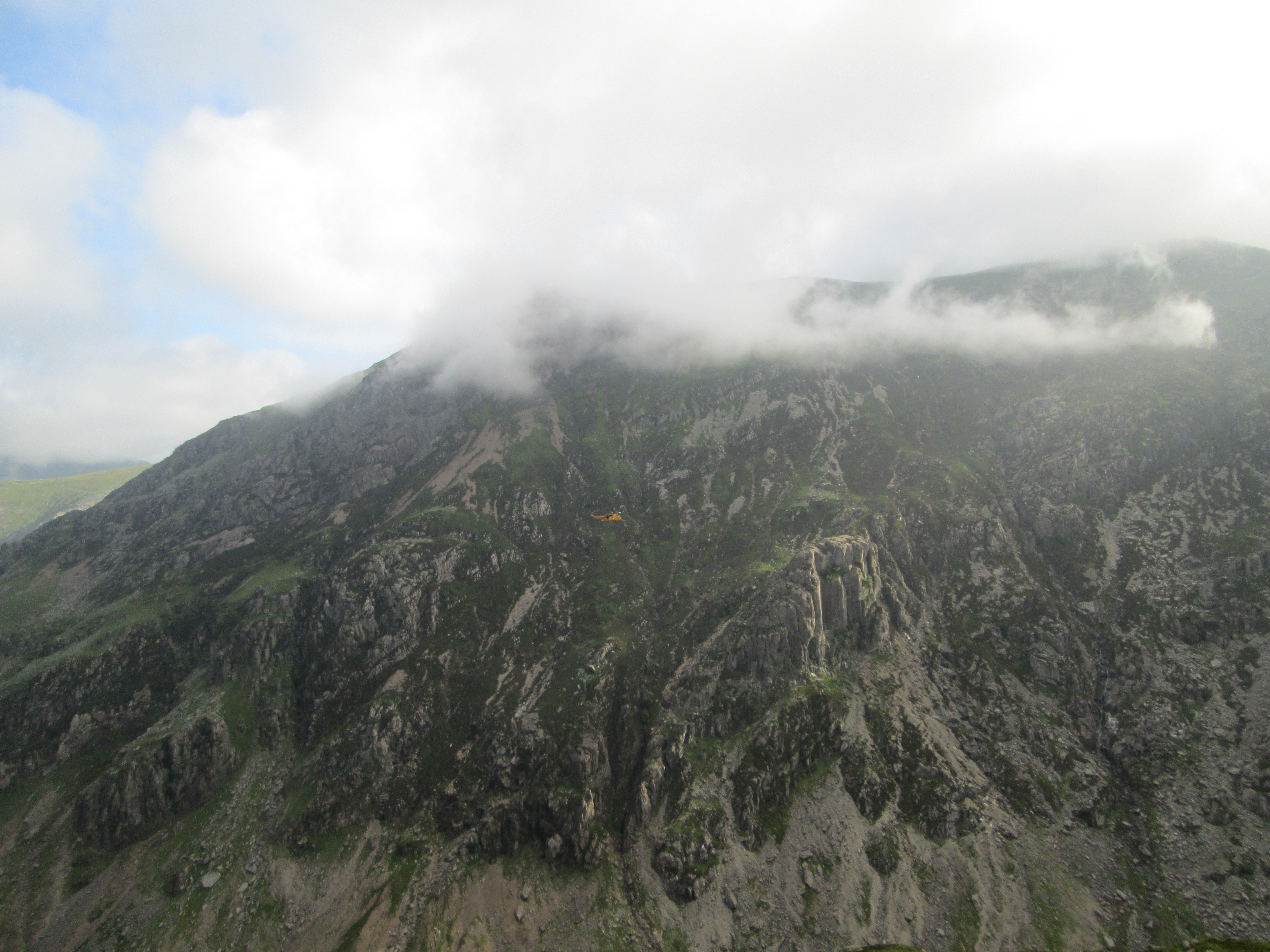 IMG_0546. Suddenly I hear the clatter of a chopper: the Mountain Rescue on exercises (right in the centre of this pic looking across Llanberis Pass towards Glyder Fawr). I seem to attract them... 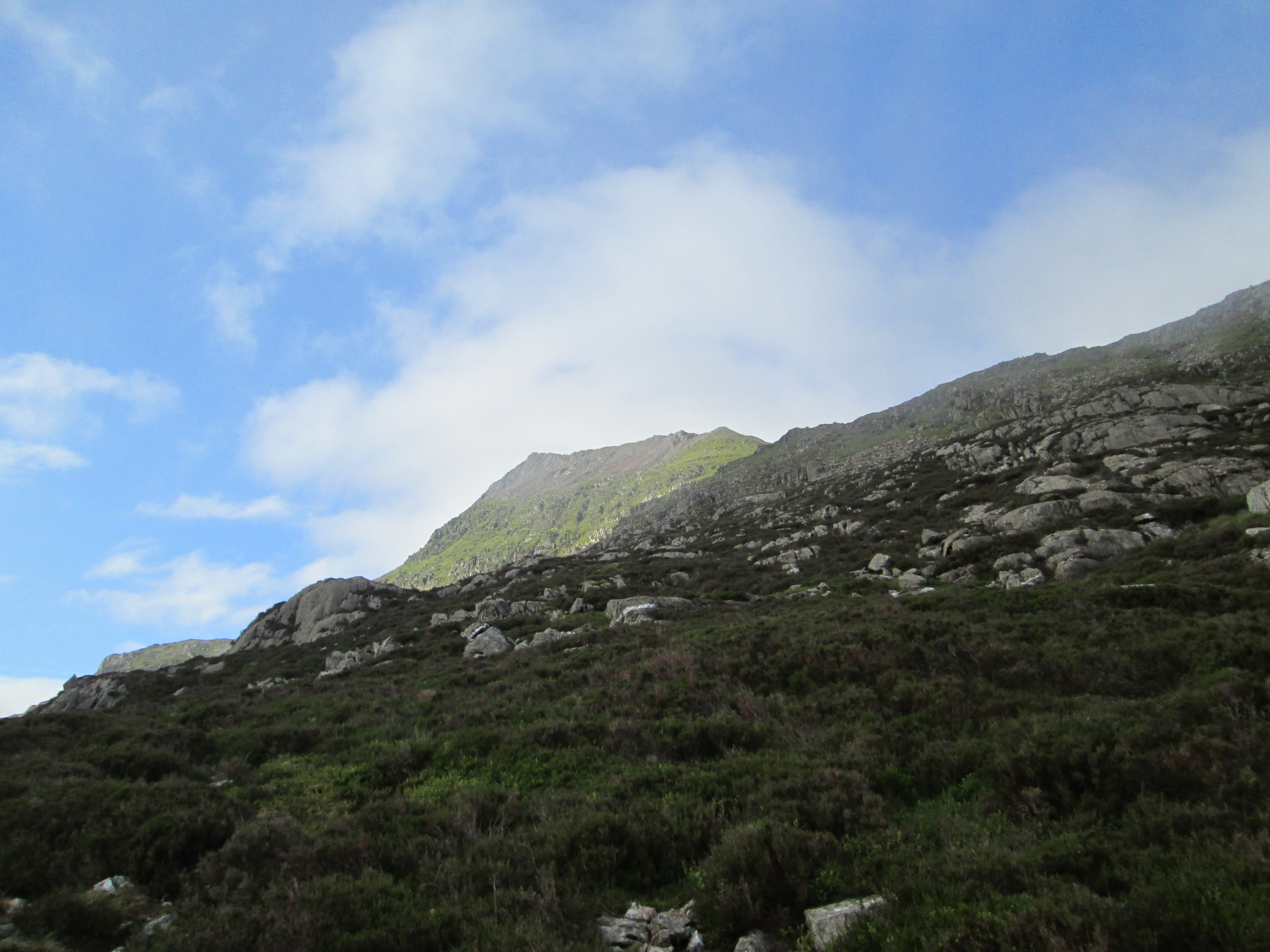 IMG_0550. Then Grib Goch comes into view, caught in the glow of the rising sun. Already there are walkers on the ridge. 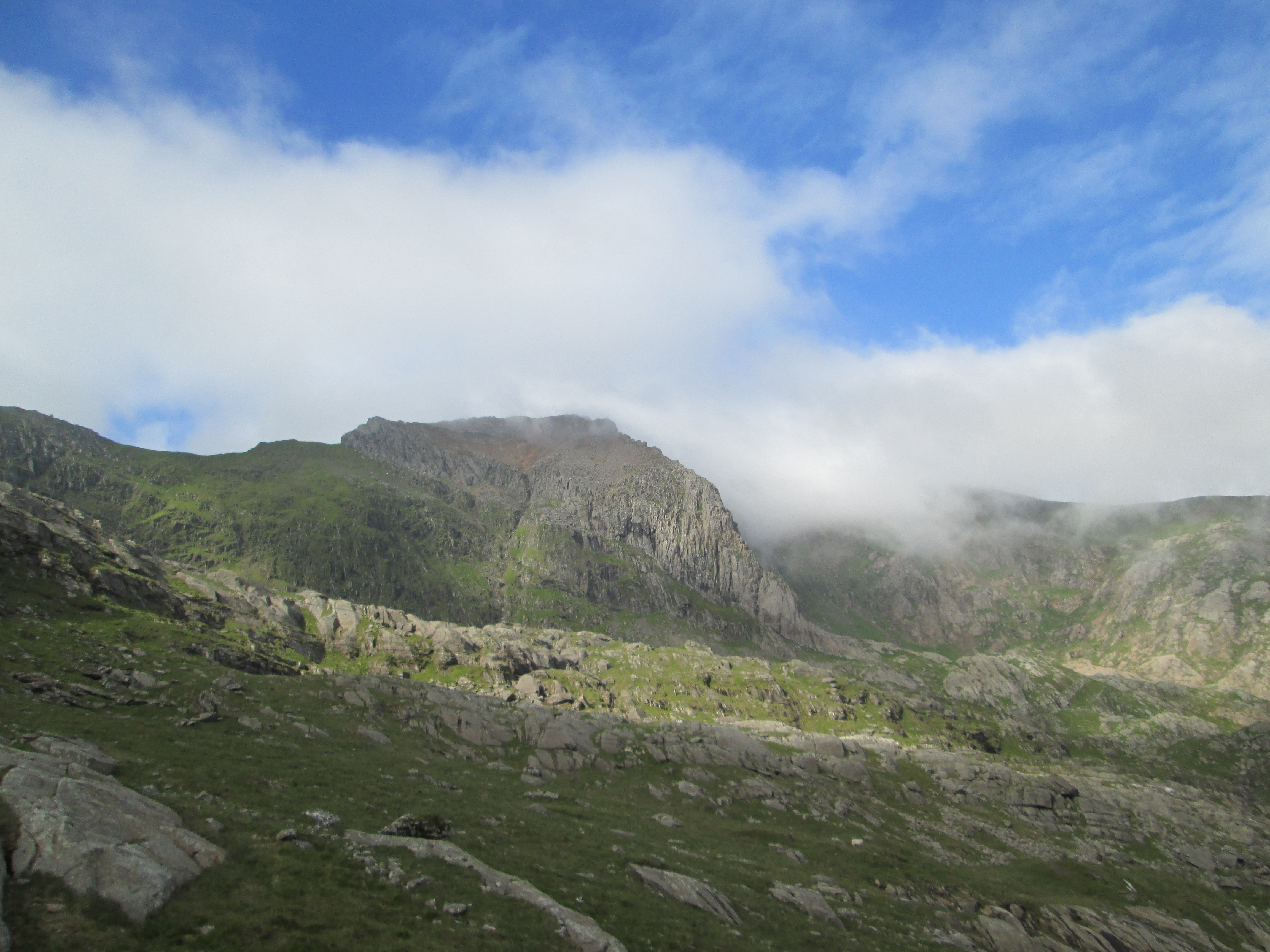 IMG_0554. But noone on North Ridge. The cloud shrouds the tops; but suddenly it clears, and there across the valley is the next goal: The Parson's Nose and Arete! 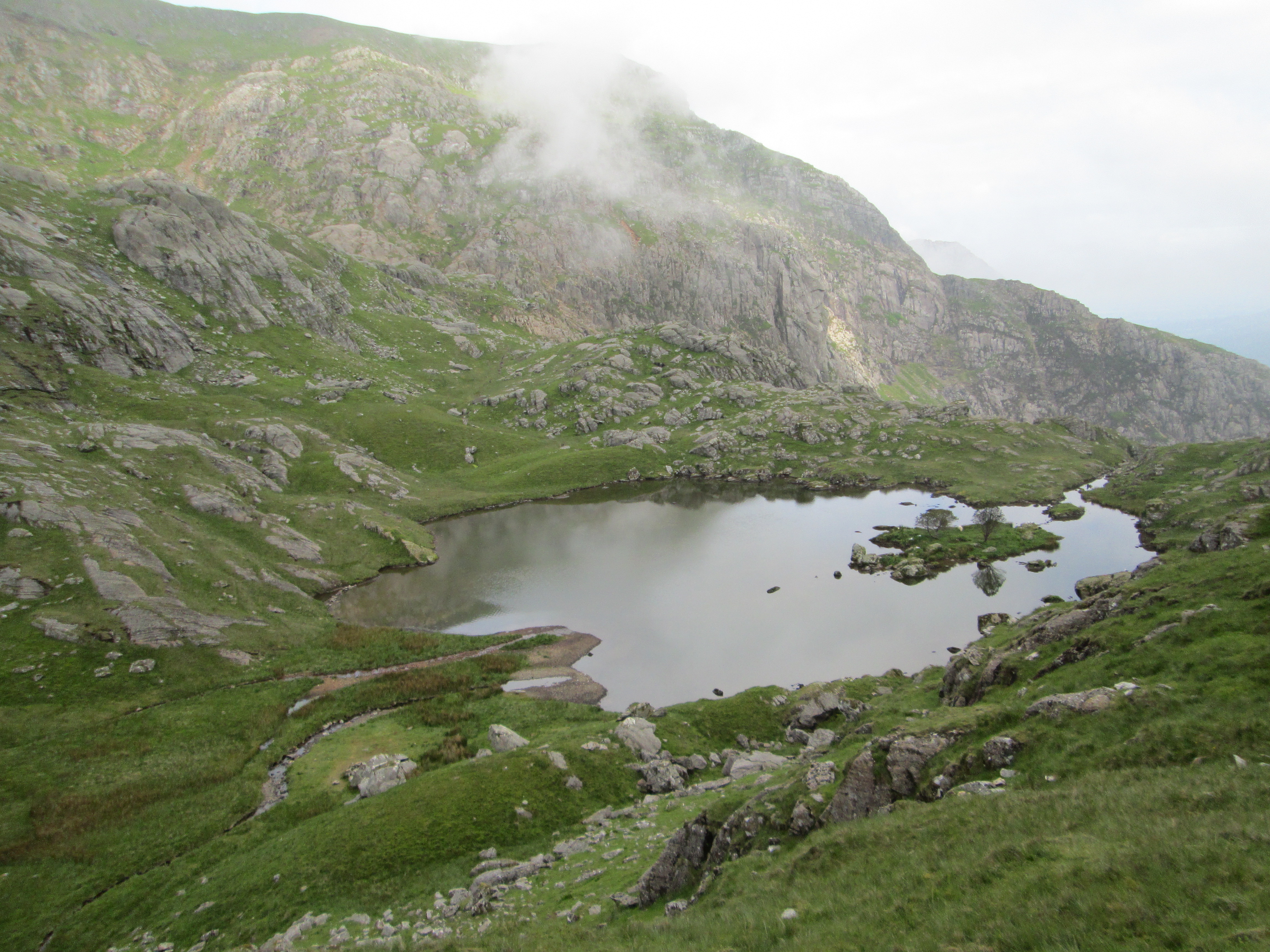 IMG_0556. Contouring round the Cwm, I come across the tiny pearl that is Llyn Glas. 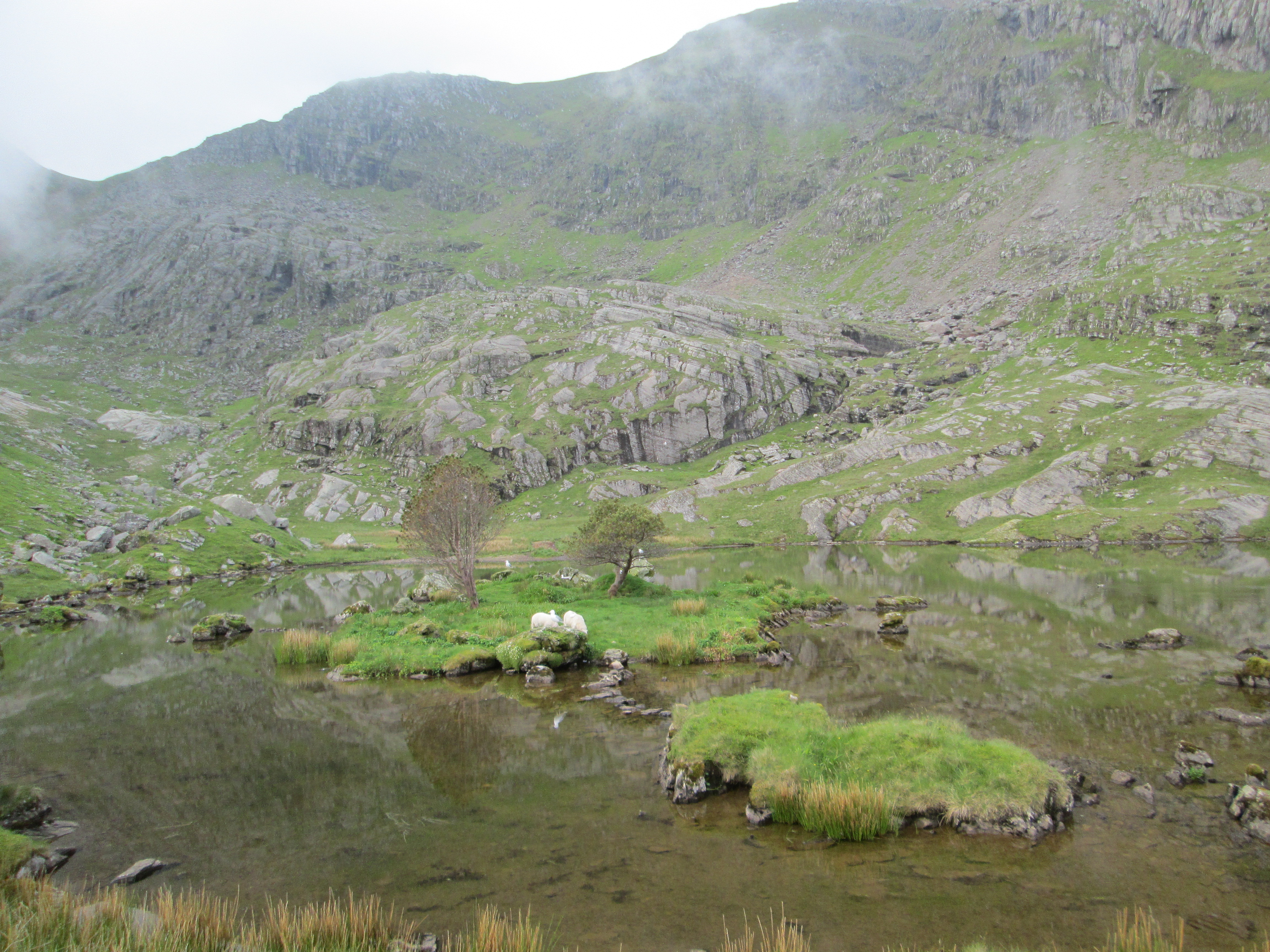 IMG_0558. Surely this little island must be the most perfect wild campsite on the planet. Even with sheep! There don't seem to be any midges....

As I cross the outlet stream I see a newt swim down and hide under a stone. I’m too slow with the camera, but it’s great to see one, the first I’ve seen in the hills anywhere. 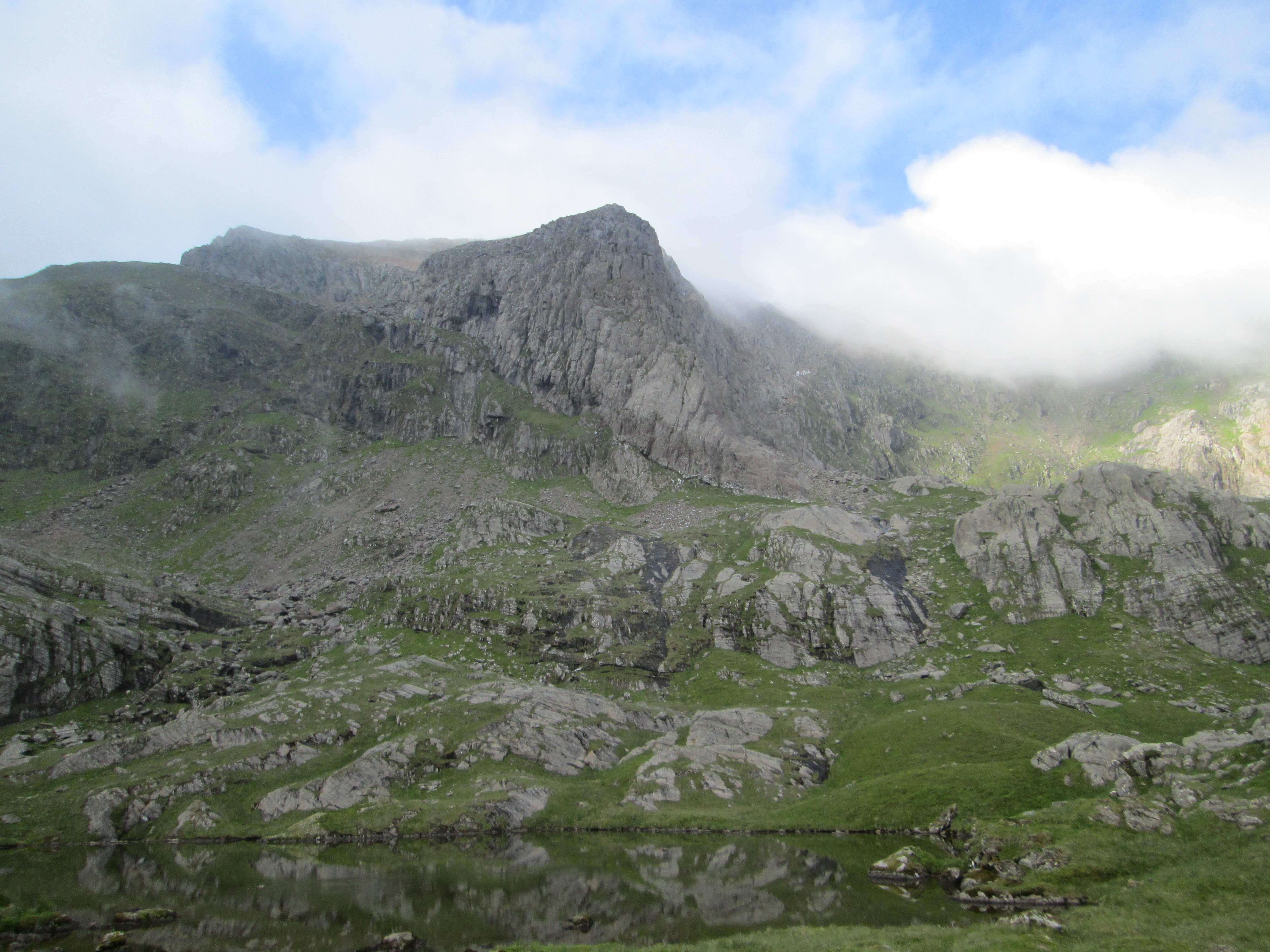 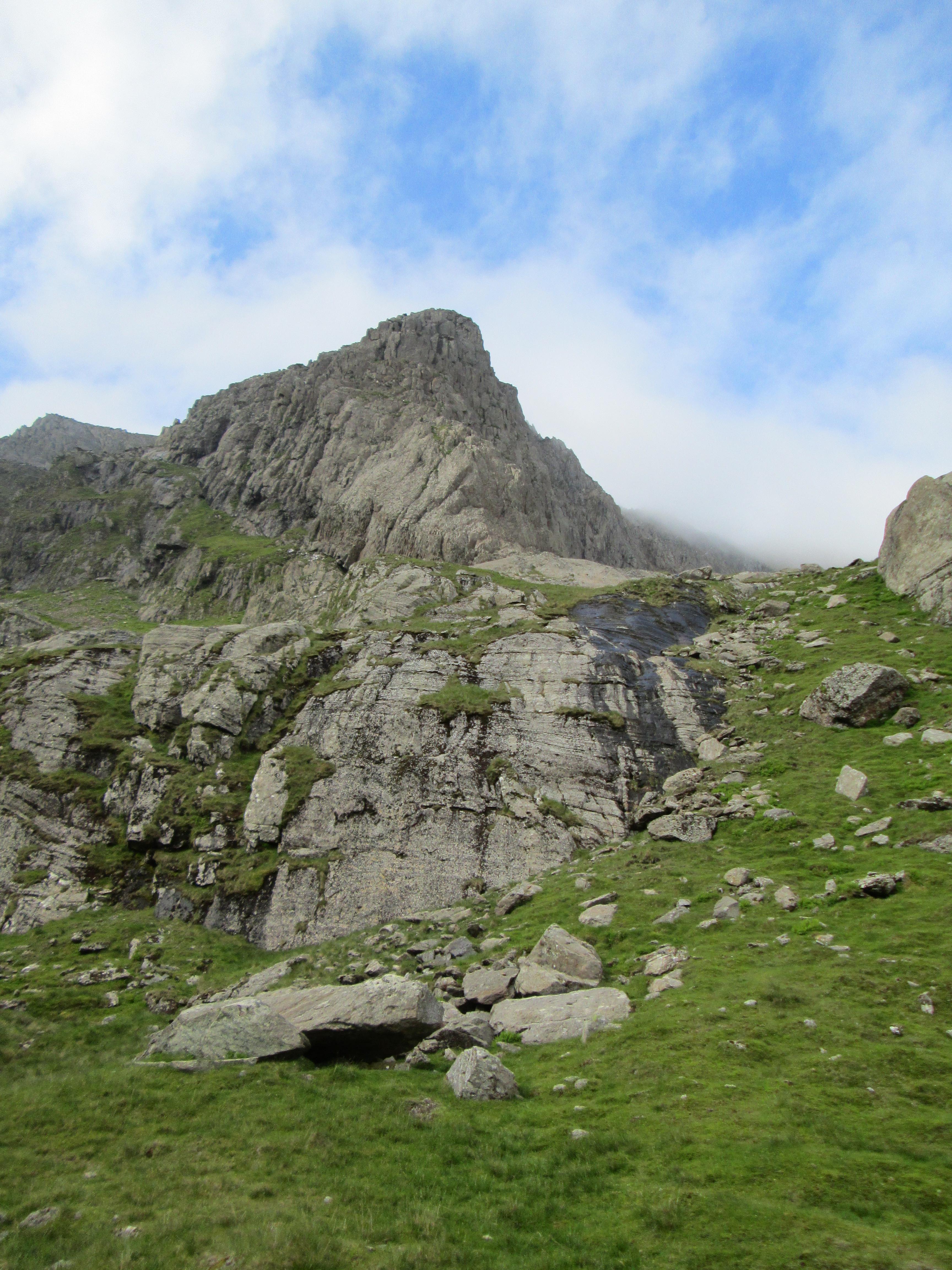 IMG_0560. So onwards, with some lovely little clean rock scrambles on the way. 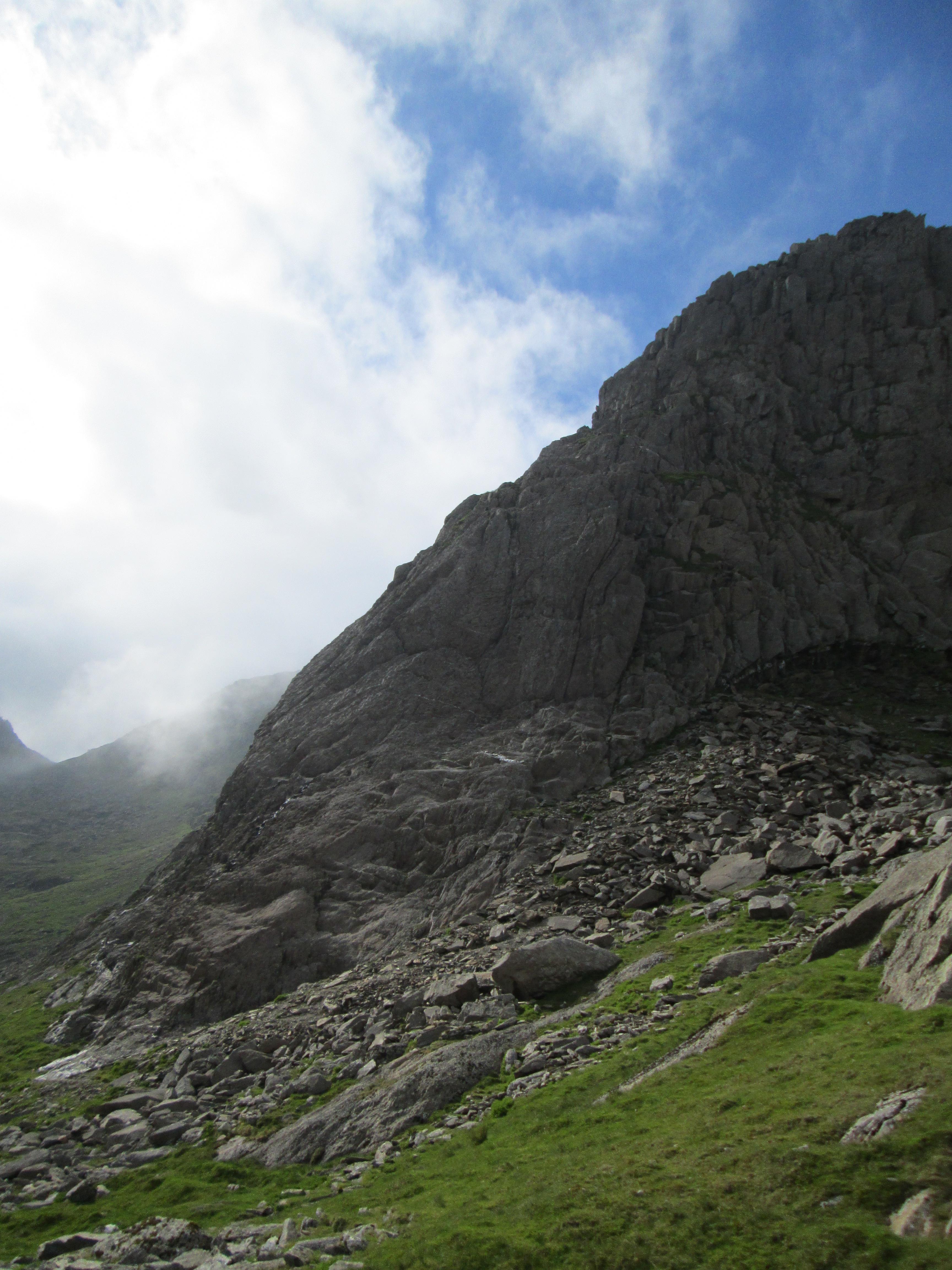 The Parson’s Nose is about 75m of climb. There is clearly a large number of route options, but the main thing I notice is how friable the rock is; every foot and hand placement therefore needs a good check before it’s fully weighted. And 110% concentration is called for. So it’s a longer climb than expected and probably justifies the V Diff grading in my “Scrambles and Easy Climbs in Snowdonia” book. But very exhilarating indeed...! 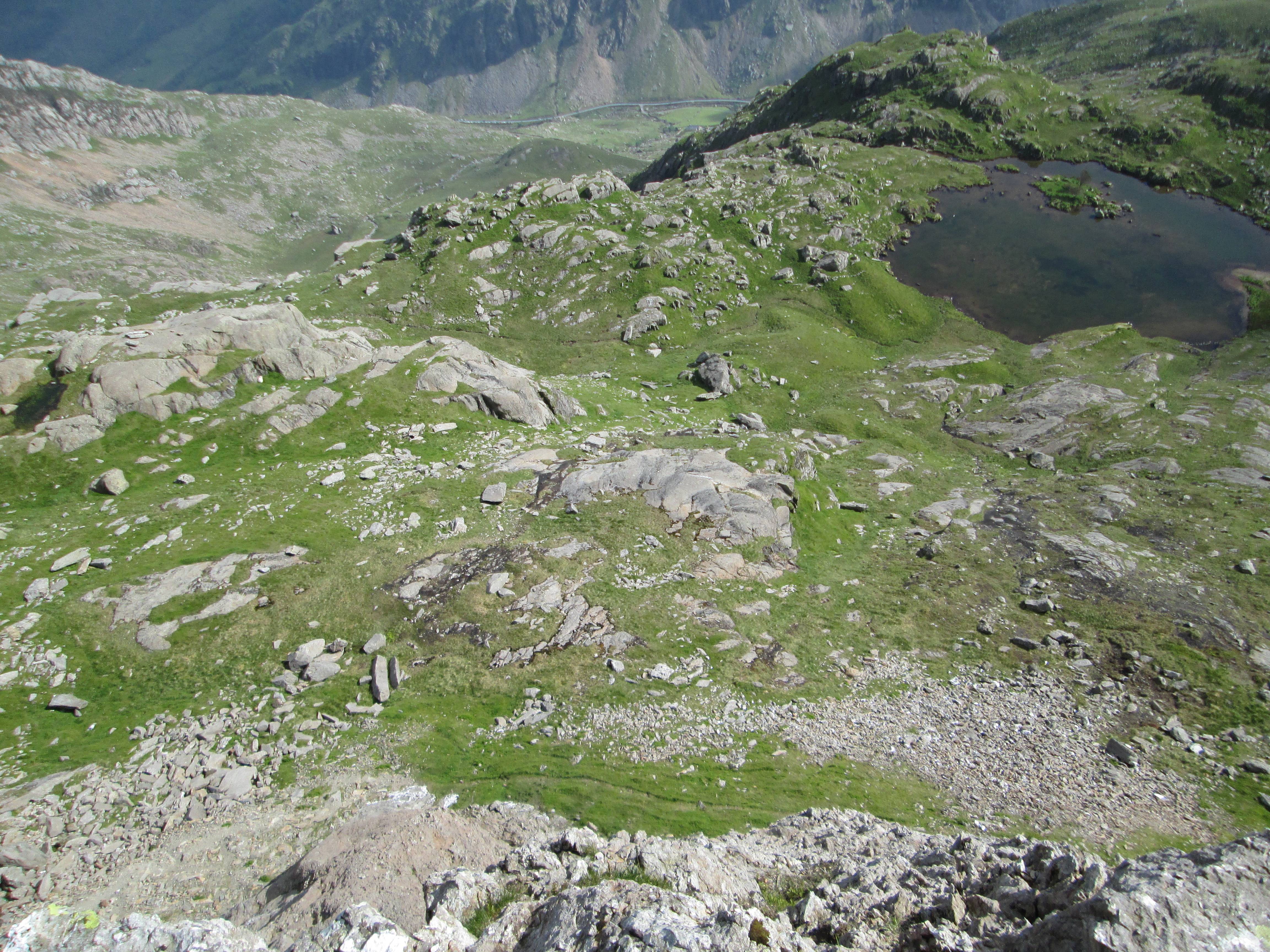 IMG_0564. With a great view from the platform top - here of Llyn Glas (again: just imagine wild camping on that little island...) 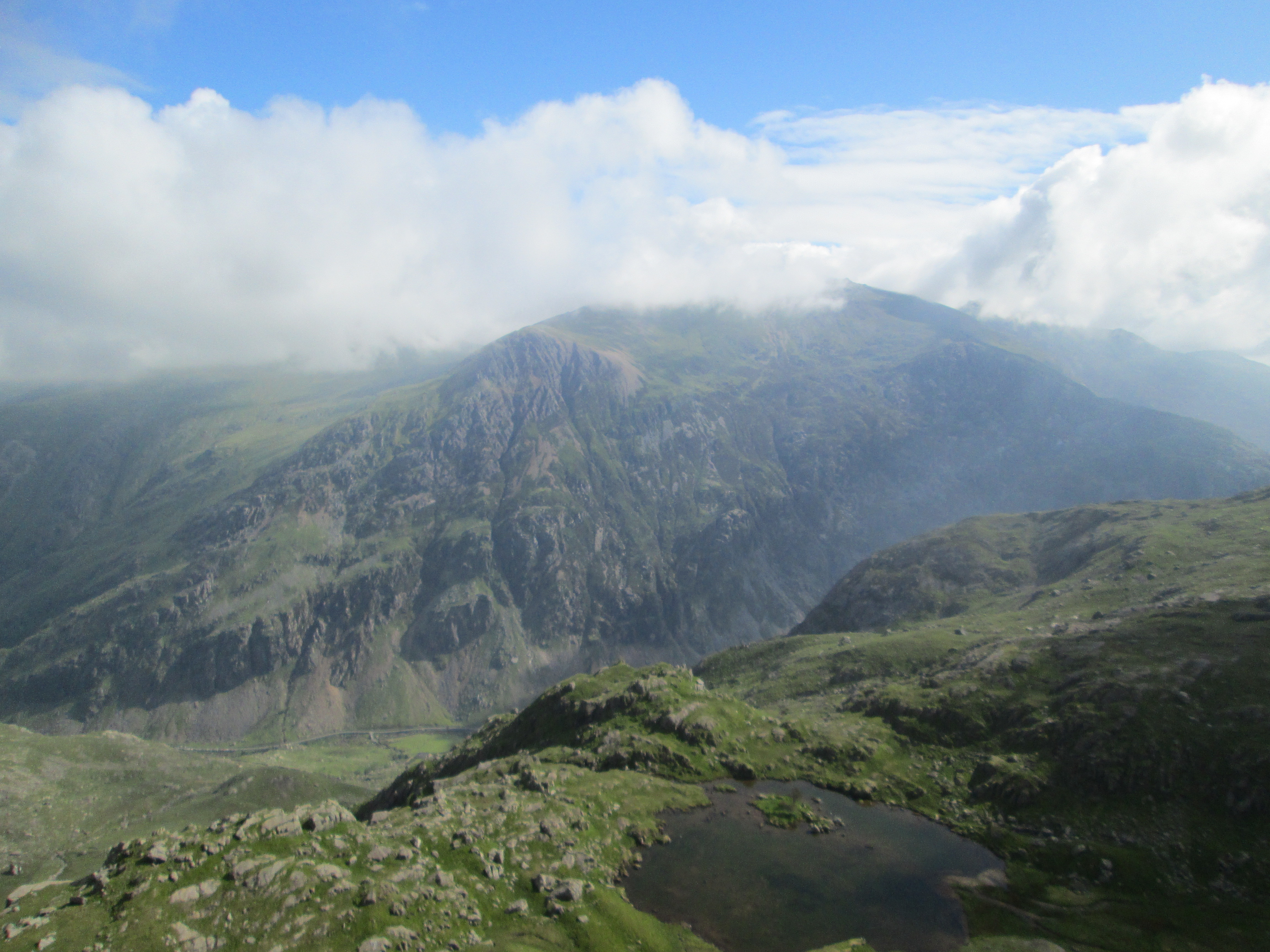 IMG_0563. The sun breaks through, though the Glyders are still in cloud. 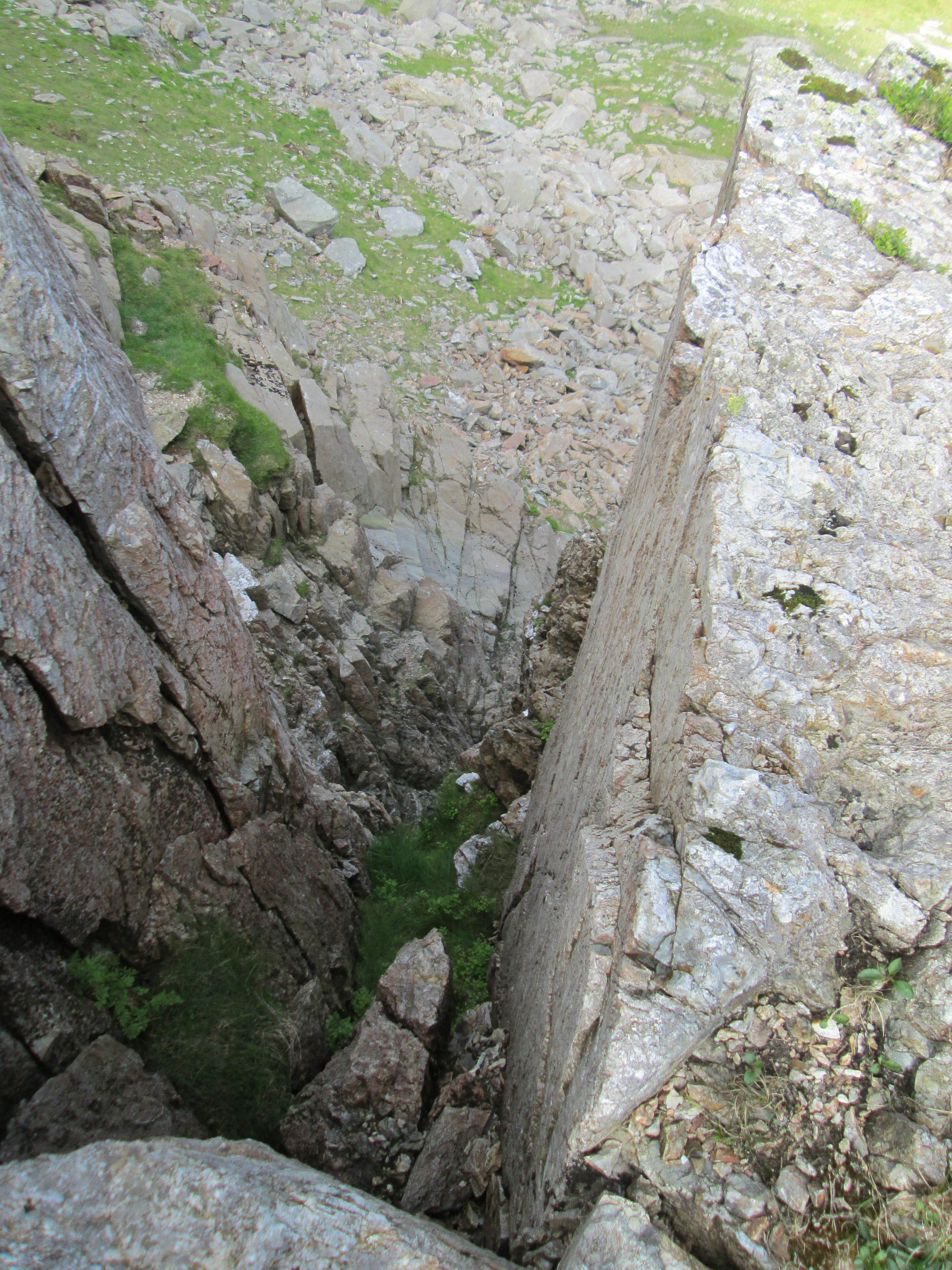 IMG_0565. If you don't fancy the Parson's Nose route, this is the much easier scrambling route via the gulley to the right hand side of the Nose. 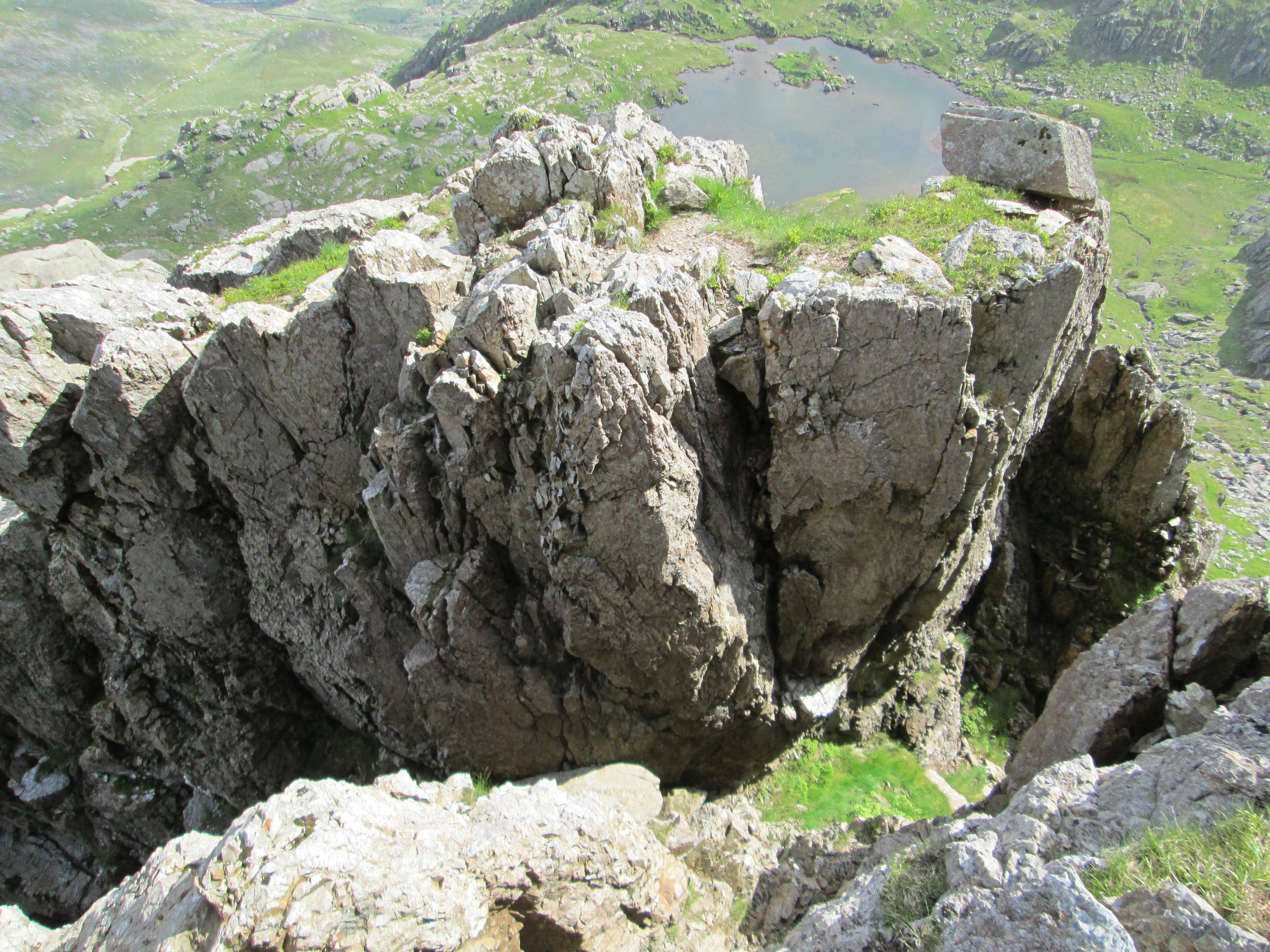 IMG_0566. The platform top of the Parson's Nose, taken from the about 10 metres up Clogwyn y Person. The downclimb to the start of Clogwyn y Person is trickier than it looks on this pic.

There are clearly many many variations on the route up Clogwyn y Person Arete, and seeing that the path seems to avoid most of the potentially interesting scrambles, I try to take the most direct line I can up the Arete, avoiding the path. Basically I follow routes that offer good hand and footholds so that the exposure is tolerable. 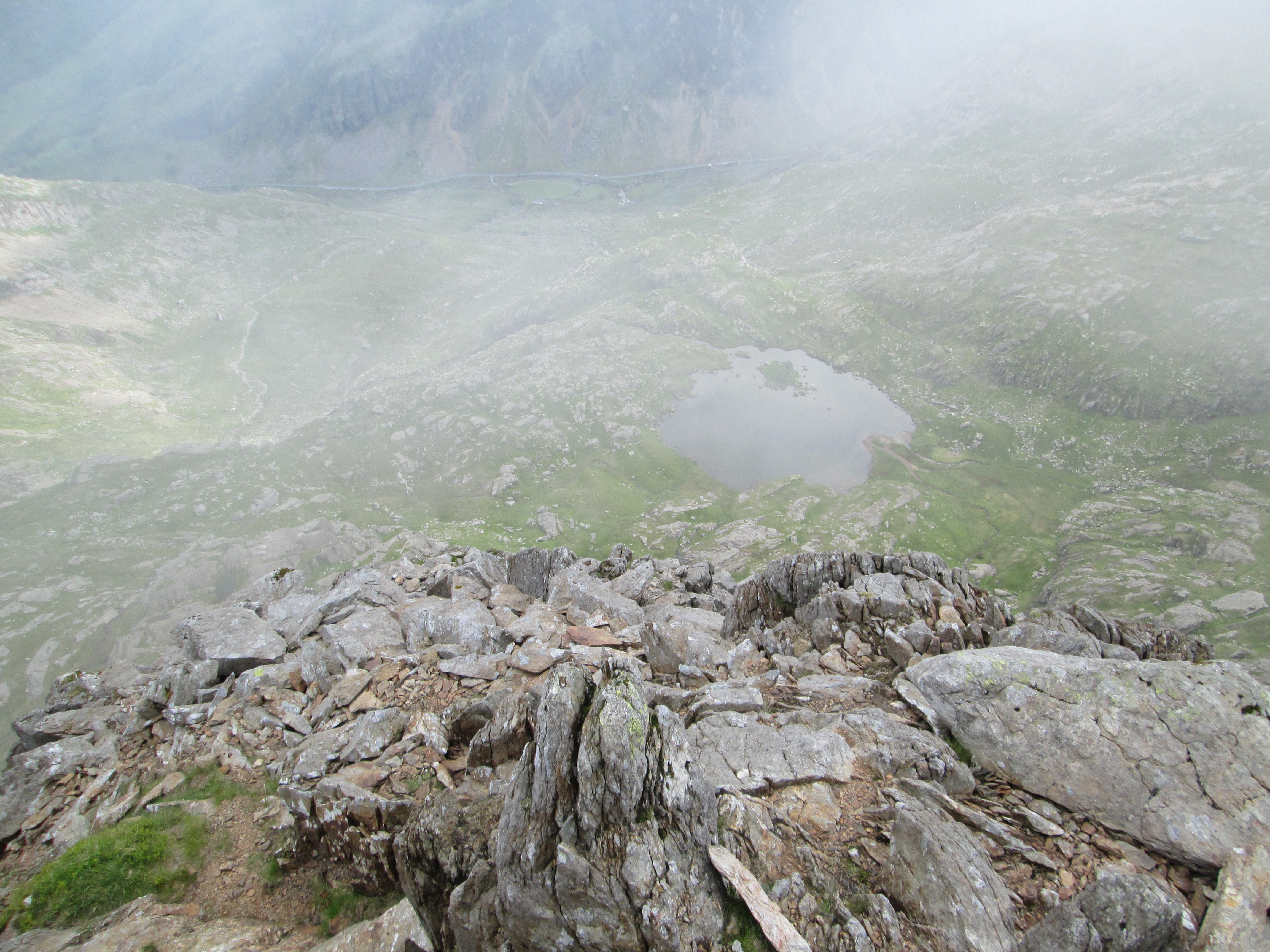 IMG_0567. At this point the significant scrambling on the Arete finishes, and it's just walking from here. I'm panting like a steam train from the mixture of exertion and adrenalin. Magic!

Just before I get to the Crib y Ddysgl ridge.... 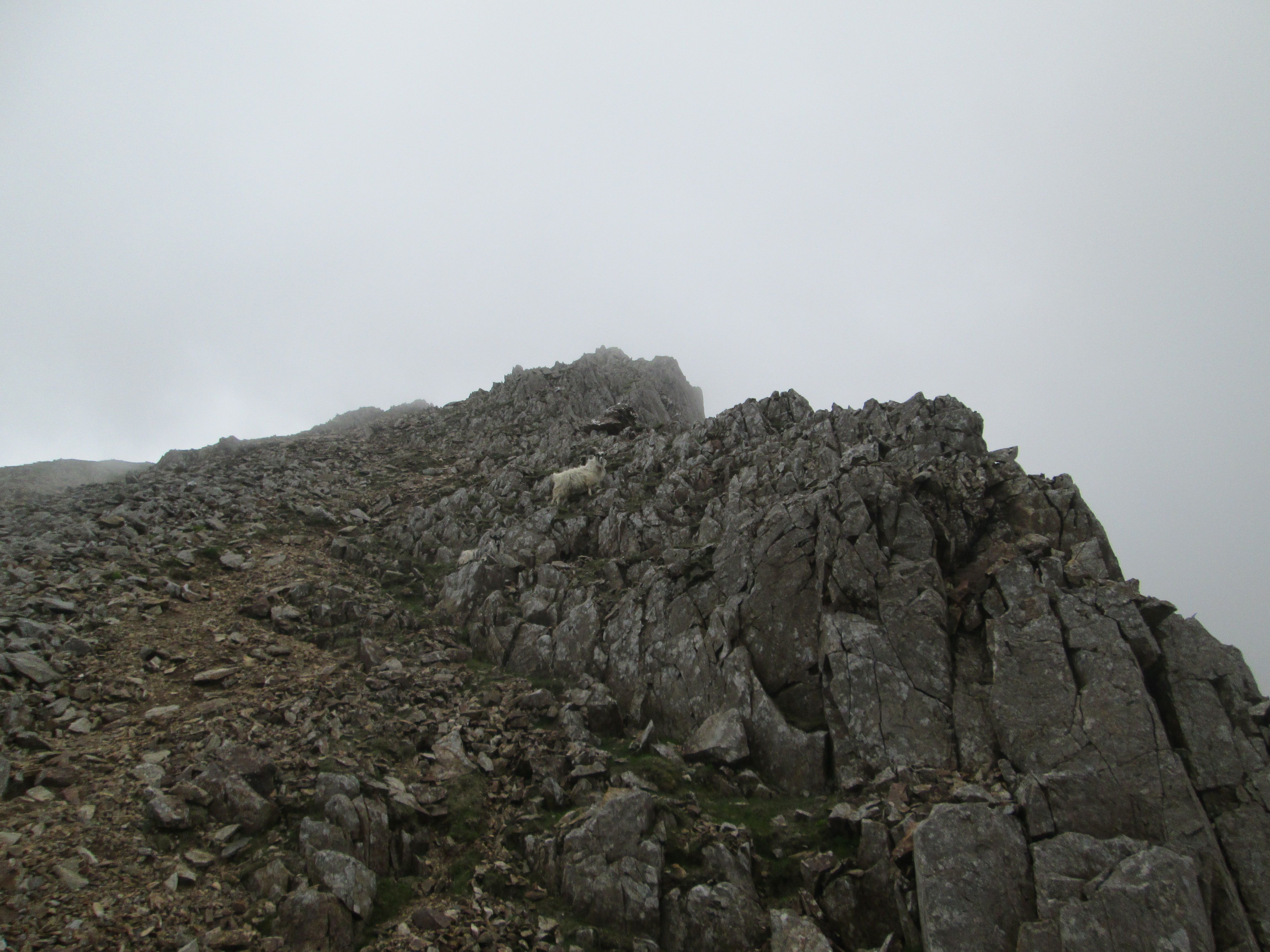 IMG_0568. These are the only other scramblers on Clogwyn y Person.

Where to from here? I have no fixed plan, which is unusual for me, but am enjoying taking my time. Doing the South Kintail Ridge a few weeks ago I spent 10 or 15 minutes on every Munro just savouring the matchless views, rather than pushing on as fast as I could; and I thoroughly enjoyed it. After all, the likelihood of fabulous views is one of the main reasons I love going into the hills.

I’ve done Crib Goch in both directions at least a score of times, but I’ve always followed the path that bypasses some parts of the ridge; so I decide to continue the scrambling theme by following a route that sticks to the absolute high points of the whole ridge.

It affords some great scrambling up to Grade 2/3, with some really exhilarating downclimbs. Oddly, this direct route seems to be significantly quicker than the path. 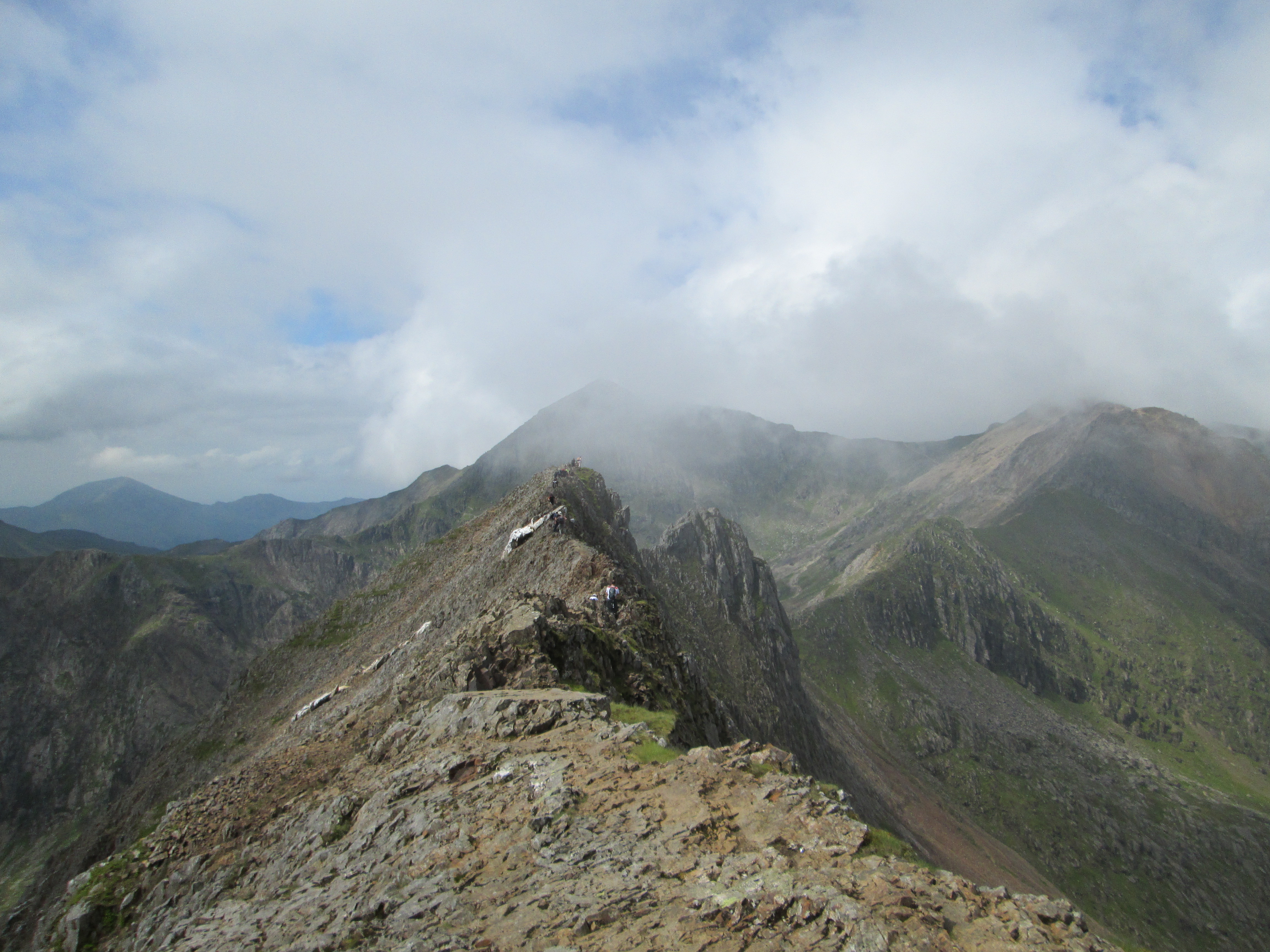 IMG_0569. Looking back along Crib Goch ridge. Already there are 10s of people who've come up from the Pyg Path. Snowdon and Garnedd Ugain in the background. 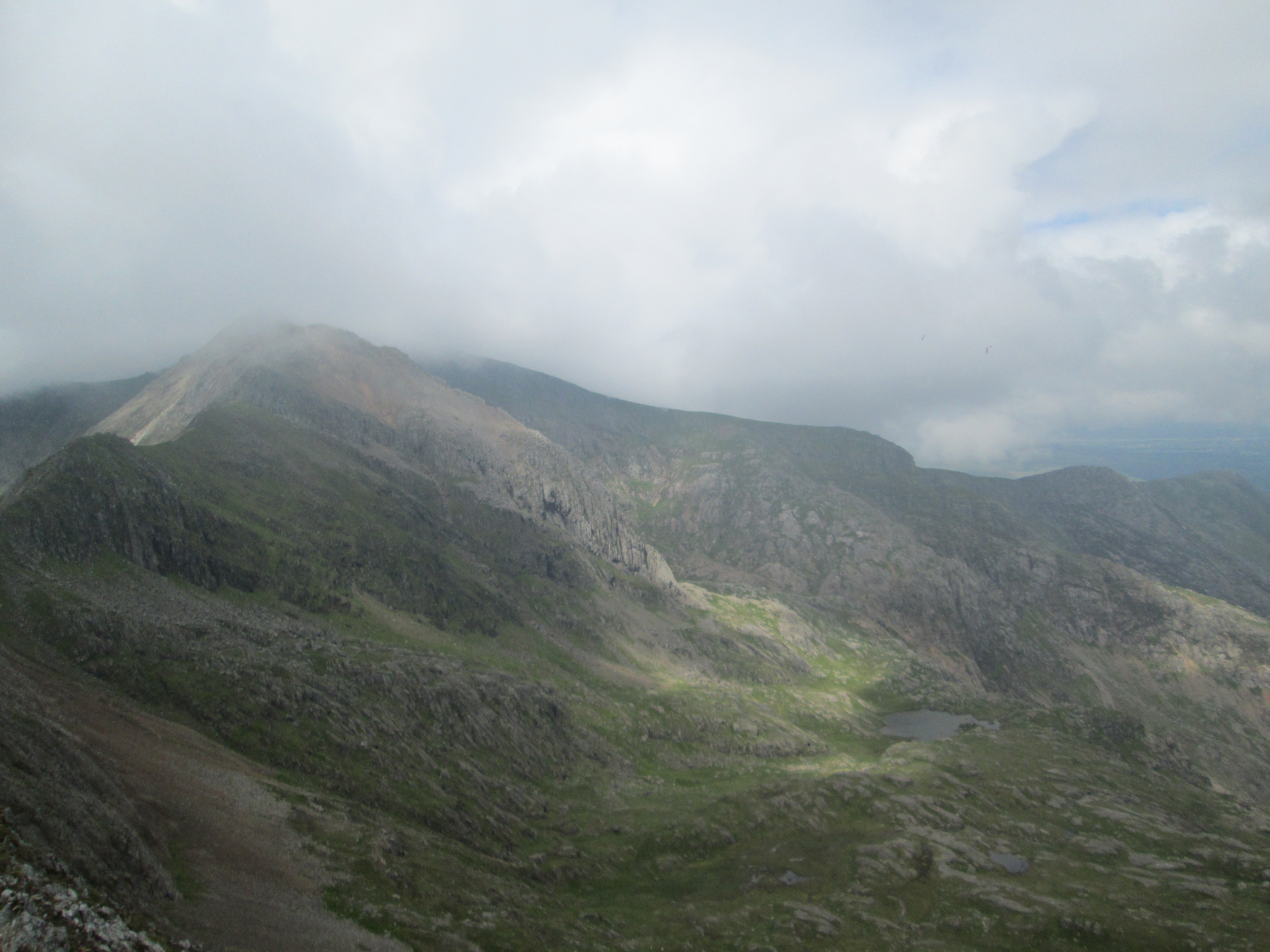 IMG_0570. Looking back at Clogwyn y Person from half way along Crib Goch, I'm still savouring the experience of that scramble. 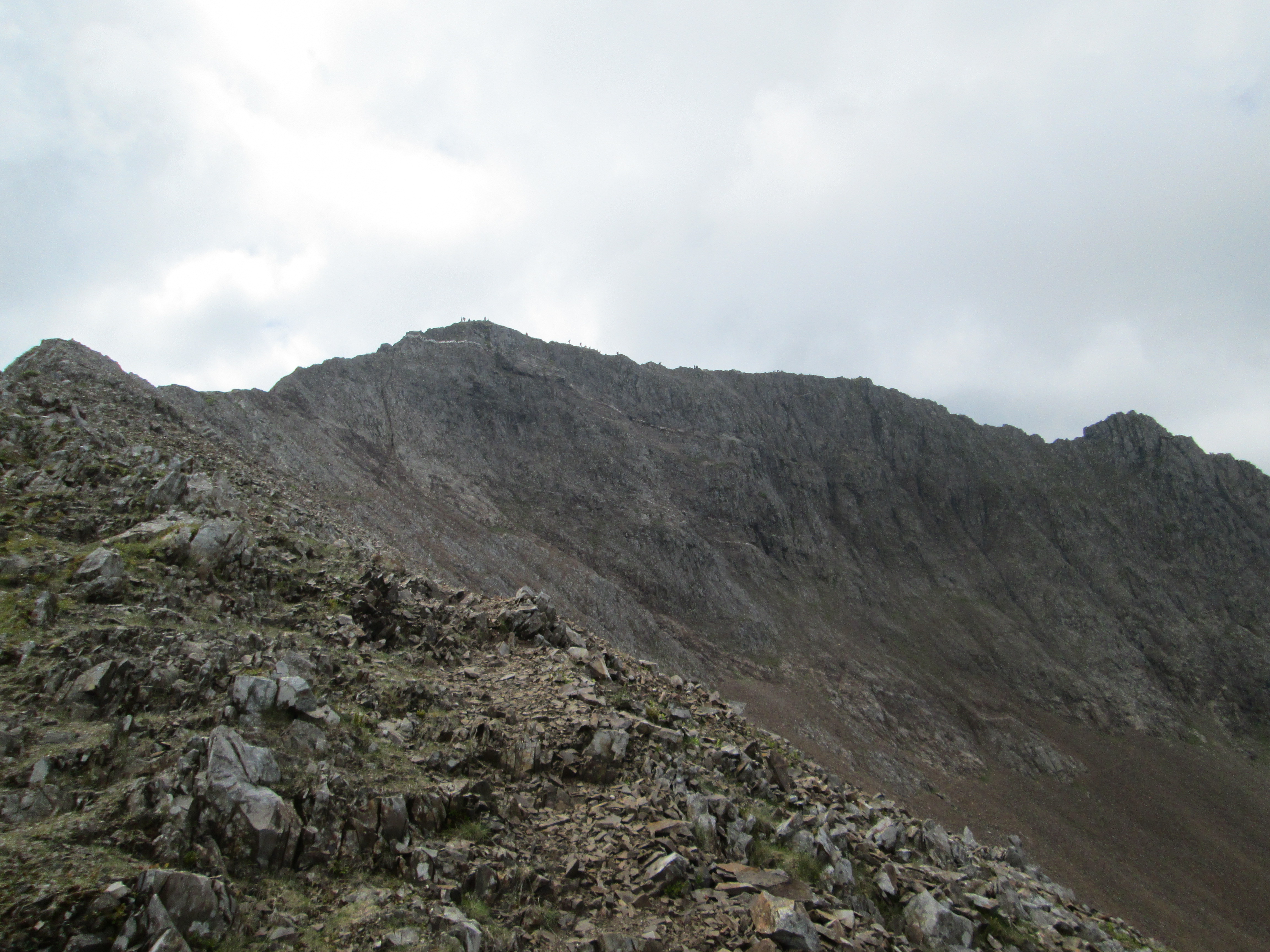 IMG_0571. After a longish sojourn on Crib Goch assimilating the view, I head off down North Ridge. A long stream of people ascending from the Pyg Track is visible, but no-one at all on North Ridge.

And so back to the car at Pont y Gromlech. 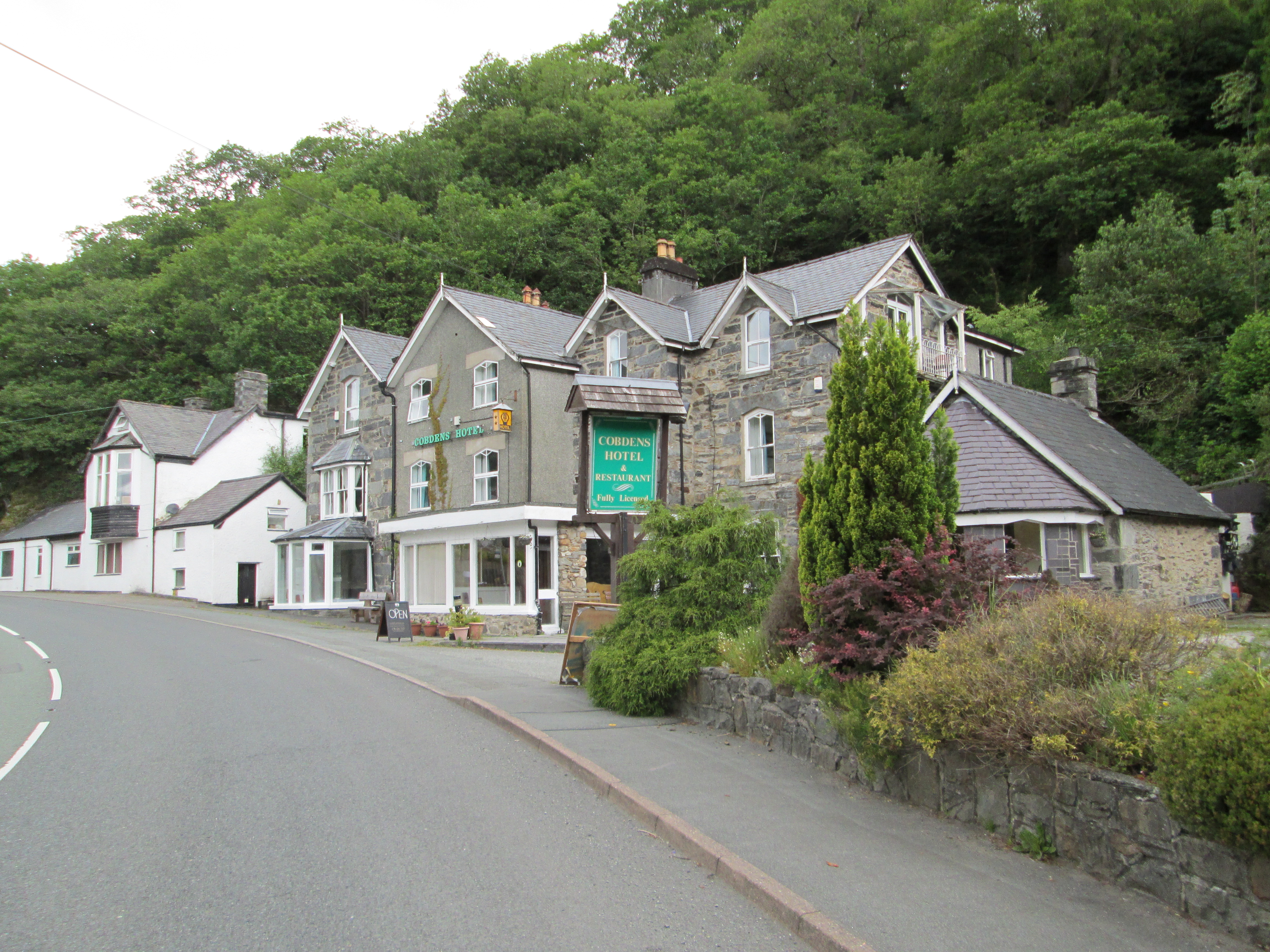 IMG_0572. After a very satisfying physical morning, it's time for more intellectual pursuits: a visit to a building of cultural, historical and architectural interest.... 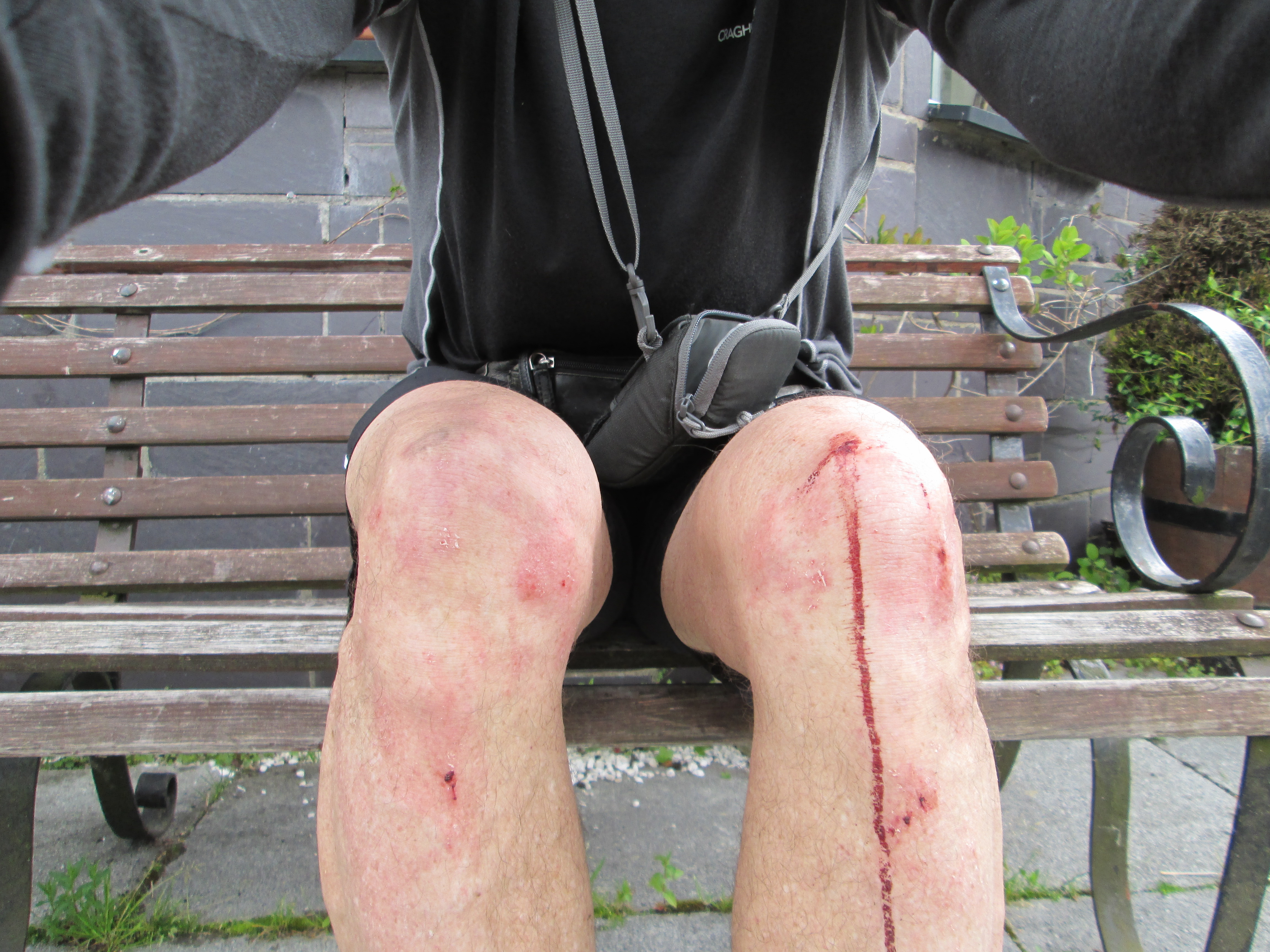 IMG_0573. Both the Jammed Boulder Gulley and Clogwyn y Person were quite technical (at least on the route I took), frequently involving leg and knee jambs. You just don't notice minor grazes when you're hanging on for dear life!

We did Dinas Mot, Clogwyn Person and Crib Goch from the same start point back in April. I had to abb off of Dinas Mot - 4b routes, walking boots, a short section of wet slippy rock, limited upper body strength and lack of outdoor climbing experience left me unable to go upwards on the second pitch. Scrambling was great though much more my scene.

Best not to wear shorts!!