I drove round to West Merkland from the Crask Inn and parked just over the bridge on the right hand side. Through a locked gate, a good estate road heads NE. In about one and a half kilometres, a stalkers path leads up beside the Allt Coir' a Chruiteir. 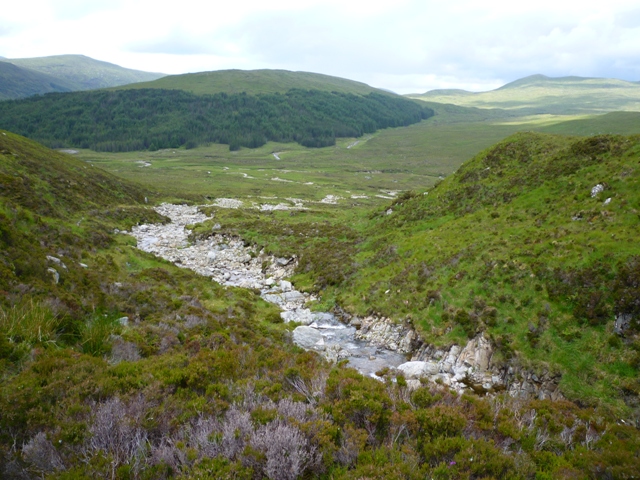 I have to say, though, that this track is not in good condition and there were quite a few sections which had fallen away into the river, leaving some quite awkward sections to negotiate. Looking up the Allt Coir' a Chruiteir to Ben Hee

The weather had by now deteriorated and I was being soaked in a continuous heavy downpour and visibility was very poor. I was aiming for the 630m bealach between Ben Hee and Meallan Liath Mor and from the end of the track, where there was a shelter cairn, I made a steady rising traverse to end on this wide col marked by a cairn, After a brief pause, I headed off up the stony and bouldery SW shoulder to reach the trig and shelter cairn perched on the cliffs above the eastern corrie. The stony SW shoulder of Ben Hee from the col

Here, it was cold enough for all my spare clothing, including hat and gloves. Just then, the rain stopped for a while and the clouds parted to allow me just a brief glimpse of the surrounding hills and my route down. I returned quickly to the bealach and the cairn and followed a line of small cairns back to the start of the stalkers path. This took a lower line than my line of ascent and was much boggier! By now the track was very wet and slippery and it was a relief to get back to the estate road in the glen for a more relaxing walk out.

Users browsing this forum: Am Basteir, dazza4994, Martraven and 52 guests