I fancied having a bash at a big Eskdale horseshoe a while back - then I came cross the Woolpack Walk.


track.gpx Open full screen  NB: Walkhighlands is not responsible for the accuracy of gpx files in users posts
Seemed to fit the bill.

Start and finish at the Woolpack Inn, 10 peaks & < 9 hours gets you a free pint when you get back (although talking to the barman afterwards few walkers do that - mainly fell runners). I decided enjoying it was more important than saving a couple of quid.

I did the route anti-clockwise - so I could take in the bad step on Crinkle Crags (having only got as far as the south top with the kids 10 years ago) and do Lords Rake/West Wall Traverse on Scafell.

The walk pretty much sticks to the big paths - although the early sections before Crinkle Crags are vague and grassy (and similarly the walk out over Slight Side) - referred to ViewRanger on my old phone (used as a GPS) a couple of times to check I was "on path" and save time consulting the map (battery lasted the full 10.5 hours).

Harter Fell was a warm-up, then once over Hard Knott you have a long shallow decent to the side of Crinkle Crags - followed by a long a relentless slog up to Adam-a-Cove. I zig-zagged up way up with Wainwrights description of the Kirk Fell south ridge my mind (although looking at the map afterwards it's not as step as Kirk Fell - but no path underfoot).

Once up on Crinkle Crags a quick check shows I have done 50% of the total ascent for the day and any doubts about being up to the task are put to the back of my mind. For here on it's just a series of 100-200m descents and re-ascents.

Chatted to a few people on the way round - on the ascent from Esk Pike to the Ill Crag/Broad Crag plateau I was asked by a couple of trainer clad Germans if I has been here before and knew the way to Scafell Pike. I answered no to the first question - but was able point to the brow saying it will appear over there in a minute (which it did) looked quite crowded at the time. Just after that I headed across to Ill Crag (checking they weren't following), then Broad Crag and Scafell Pike.

From Scafell Pike it was off to Scafell - some brief cloud brushed Scafell at the point making me wonder if the forecast possibility of showers late in the day was going to spoil the last summit (however it came to nothing). Spotted a couple of climbers (heard them first) who seemed to be having trouble on the crux of Broad Stand - they'd just descend back to foxes as I got there and slithered down the right of Mickledoor to Lords Rake.

I had been planning on the West Wall Traverse - but being having read a couple of MRT reports that it wasn't in good shape and being aware I was pretty tired and the weather could turn I chose to stick with the safe option of Lord's Rake all the way. After the three short scrambles it was then a short slog up to the summit.

The two climbers arrived shortly after me - apparently Broad Stand was very wet and slippy from the downpours of the previous day and night.

Any cloud had vanished and I was left with the 5km gradual descent over Slight Side and back to the Woolpack Inn for beer and food, before the walk back to the Hollins Farm campsite (another easy km).

Another group, who I recognised arrived 30mins after me, they had been attempting the route in the other direction and I had passed them somewhere one the way. Despite doing the Yorkshire 3 Peaks each year they had aborted and skipped Harter Fell at 12 hours in. They did admit to little preparation and too many pints the night before! Mentally I think my direction is better as you get all the bigger ascents out of the way early and the decision to abort at Hard Knott/Harter Fell is probably more tempting - than the one to bail out at Scafell Pike.

Reflections - a grand day out, 9 hours is an aggressive target (I wasn't treating it as a serious target) I may not be that fast uphill, but you need time to take in the views etc. I probably spent 9 hours on the move and only had a brief lunch stop on Crinkle Crags (although 2 Yorkie Bars and about a dozen Asda Brunch Bars were consumed on route to keep the energy levels up).

I did this one in the opposite direction years ago in terrible weather - pouring rain and heavy mist.

Great walk but we went badly wrong at Esk Hause (not knowing the area as well as I do know) going over Allen Crags and almost to Glaramara before a slight break in weather allowed us to spy Derwent Water ahead of us and turn around back over Allen Crags.

We then summited Esk Pike and got lost AGAIN and went back over Esk Pike to Esk Hause. We then got on the right path for a while before having fun and games later on trying to find the true summit of Hard Knott (as at the time that was a Wainwright I hadn't done).

After deliberating whether to continue to Harter (considering all the unnecessary ascent we'd done at that time) we eventually went for it and after what felt like a gruelling last 900ft or so we finally got our reward as the cloud lowered and we got an inversion around the summit rocks.

It seemed like a reward for persistence more than anything!

Found your report when googling for any gpx files last week. You're not the only one to go wrong in the Esk Pike/Hause area in the cloud. I have friend who is not allowed to forget the day he took a wrong turn around there and lead a party onto Bowfell instead of Scafell - it was only when the cloud lifted a bit the mistake was realised. Then then doubled back to Scafell and were very late home that night (pre-mobile phone days as well). I now know a number of people who were on that walk and they will often re-count the story (before I tell them it was my friend who was leading)!

A view from the side of Harter Fell of everything to come. 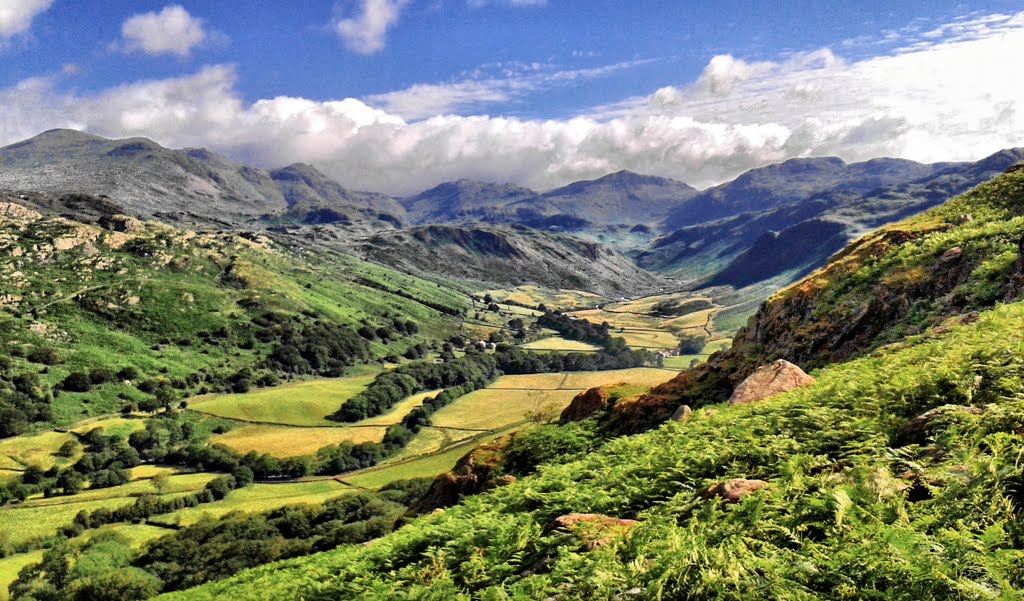 stevesey wrote:A view of the side of Harter Fell of everything to come.

stevesey wrote:A view from the side of Harter Fell of everything to come.

I was part of the bunch of 5 walkers you met last year going round in the opposite direction to that which you completed the task. Are you the guy with the awesome fanny tickler under your nose who was settling down with a pint as we dragged ourselves into the pub ?
Yep, we were tanked up on too many Morettis in the Woolpack bar which was mainly due to arriving way too early the previous afternoon and watching 3 world cup games in a row and racking up huge tab at the bar !
Setting out up Slight Side with a major hangover at 7.00am is not a good idea and don't advise it ! Veteran Y3P walkers annually every Jan/Feb for the past several years we all aborted after Hardknott as the lure of more ice cold Moretti by taking the shortcut down the lane was far more appealing.
Stuttard to be fair was destroyed after about an hour with myself and Tibbsy agreeing with him that our physical capabilities were not the best. Evsy as usual didn't stop talking all the way round which is his way of dealing with the horror taking place under his feet. Blueboy was taking the lead with honour but then again he is a pussy when it comes to the ale.

However all was redeemed this weekend just gone when we took your fabled fanny tickling advice and we tackled it again but anti clockwise and smashed it in 10 hours. This was helped by not arriving until 8.00pm the night before and drinking Bathams in our rented cottage rather than Moretti in the Woolpack. Benny arrived late that evening and took Roland home early doors the next morning easing the financial petrol burden of a solo trip back to the Midlands.

Yes that's me - well done to you and team on completing. Good to hear from you - how long have you been searching for me on 'net

Y3P is still on my list - but plenty of Wainwrights and some classic welsh lumps to knock off as well.

There's always this for next year? http://www.walkhighlands.co.uk/Forum/viewtopic.php?f=16&t=51636