our_route.gpx Open full screen  NB: Walkhighlands is not responsible for the accuracy of gpx files in users posts
On a day when the weather was 25c I decided it would be good to take my dog with me on a tour of the Cairngorms, poor wee Zach is a Lhasa Apso with short legs and a long coat. We set of from the main ski car park at 8.30 and headed down across the burn and followed the excellent paths making it very easy to follow just watch and avoid the two paths which branch off to the left for Corie an t-Sneachda and Corie an Lochain. It is gentle start to the day but gaining height all the time and there were plenty of places for Zach to drink water and cool down he loves sitting in water to cool down. As mentioned in other reports the views over the Lairig Ghru towards Braeriach and the other tops was brilliant and made up for the moon like quality of the surface we were walking on. We arrived at the top of Ben Macdui around 10.45 and had a drink and decided then to make our way to Beinn Mheadhoin. Zach looks for food at the top of Ben Macdui At the top of Ben Macdui

The path was easy to find and could be seen stretched out in front of us, the torrs on Mheadhoin could be seen in the distance. We met a few nice walkers on the way and my apologies to the Polish chap who I thought had a Welsh accent. one of Zach's many water brakes

By one o’clock we were on top of Beinn Mheadhoin and enjoyed a scramble about on the torrs and then ate lunch. Zach on top of Torr

Then it was back towards Loch Etchachan and then the drop down to Loch Avon. As we headed down the loch looked so inviting I was definitely going for a paddle. Loch Avon and the path heading up towards Cairgorm

Zach was first in and I paddled for a while before taking the plunge and swimming for a few short lengths, absolutely the best bit of the walk brilliant and refreshing the dog was thrown in for a swim as well. Then it was the long pull up to finish the day on Cairngorm by the time we got near the top I thought I had broken the dog he was trailing behind and I thought he might stop all together but we arrived at the top just before 5. 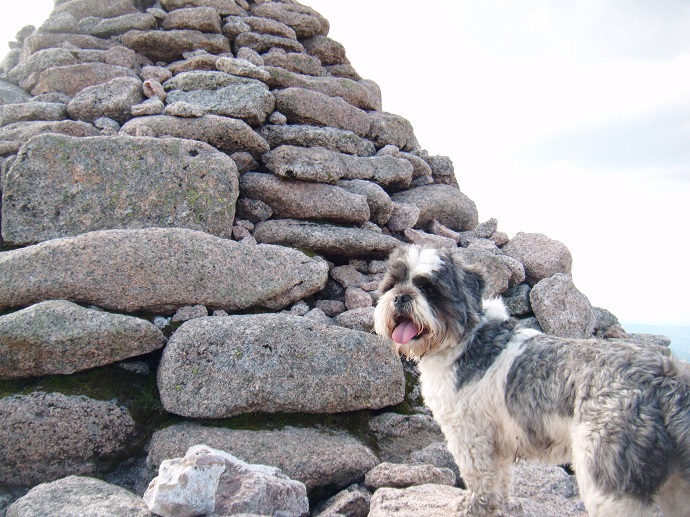 We would have taken the train down but it was closed so it was straight down the ski run to the car and a well-earned rest.

I was tempted to swim in Loch Avon after doing Beinn Mheadhoin but made do with a paddle and the worst was still to come - climbing up the Saddle in the blistering afternoon sun!

ye that was a real drag, Zach was nearly giving up on me.

Think I chatted to you at the head of Loch Avon?
Great day, the water temperature in Loch Avon at around 6pm when I went in was just perfect.

ancancha wrote:Think I chatted to you at the head of Loch Avon?
Great day, the water temperature in Loch Avon at around 6pm when I went in was just perfect.

No I think I was back at the car park by then but it was a brilliant day one I will remember for a while,