It was the week of the Nethy Bridge meet and with it being the school summer holidays, I was able to head north a few days early to get a few days in before meeting up with all the guys and girls at Nethy Bridge. I had long since decided that with a Wednesday to Sunday pass, I was going to head up to the Ullapool area for a first taste of the Fannichs, a shot at the Beinn Dearg group (which I had ditched at the last minute last September in favour of the Creag Meagaidh circuit) and hopefully Ben Wyvis on the way back south on the Friday.

I had no pretenses about trying to do all the Fannichs in a oner, or even seven of them, with a big day on the Beinn Dearg group the following day, so I settled for the western five from the Dundonnell Road near the head of Loch a'Bhraoin.

I was away from Perth by 05.45 so I had plenty of time to play with. All the way up the A9 and then along the Ullapool road to Braemore Junction the weather played things close to its chest and on arrival at the start of the walk, the cloud clung low to the summit ridges of the Fannichs. Och well, Scotland in July - what more can one really hope for????!!!!

I set off towards the head of the loch still swithering about whether to stick with the plan or change it - and if so, how. I elected to tackle the two western outliers first and then make a decision on whether to go for the central three across the Allt Breabag after that. Shortly after crossing the footbridge I struck off onto the slopes of Leitir Fhearna that lead onto the Druim Reidh, the eastern arm of the coire that cradles Loch Toll an Lochain. From about the 350 metre mark I happened to look back and saw a group of four walkers coming over the bridge. I assumed they would continue on up the glen to the high bealach but they followed me up towards Leitir Fhearna in worsening conditions. Weather not looking too clever Leitir Fhearna and the Druim Reidh North across Loch a'Bhraoin from the ascent of Leitir Fhearna Onto the Druim Reidh

I paused for refreshment at the cairn marking the top of Leitir Fhearna and the start of the broad flat section before the long gradual ascent of the Druim Reidh and one of the four caught up with me as I sat huddled in the rain. She was up from dan souff and was walking with her boyfriend, sister and father. They had already done several big routes over the previous few days, including the Beinn Dearg round, my intended entertainment for tomorrow. I left her to wait for the rest of her group and cracked on. I must have been guilty of path watching at some point as I only gradually began to register that I was losing height on the west side of the ridge and dropping down towards the loch. A quick check of the map suggested that a quick lung burster up the slopes to my left would put things right and bring me out somewhere around the summit of Toman Coinnich. I popped back up almost right on top of the 935m summit cairn and, despite it being a straightforward looking walk from here to Sgurr Breac on the map, thought it best to take a quick bearing in the clag. A quick down and up and I was soon on the windy summit of my first Fannich (if you discount Fionn Bheinn in any case) where several attempts to set up the mini tripod for a self timed shot ended in dismal failure. 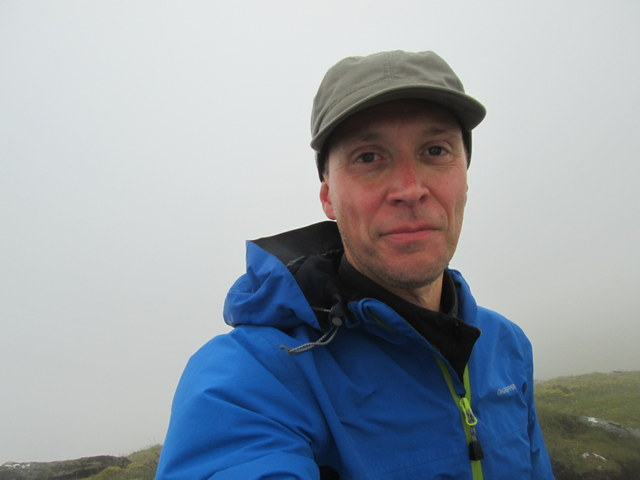 Down into Coire Breac

Back on Toman Coinnich, I met the four others who had tackled A' Chailleach first. I had opted for Sgurr Breac first so I would be returning to A' Chailleach and in the process heading away from the central three, thus disabusing myself of any notion of wasting them on a skanky day such as this. After assuring them there was precious little chance of any shelter en route to their second Munro of the day, and even less chance of actually seeing anything, I headed for A' Chailleach. Final haul to the summit of A' Chailleach

After a couple of summit shots that could frankly have been taken anywhere, I headed off via the other arm of the coire, the Sron na Goibhre ridge. Time to alter the plan! Descending via the Sron na Goibhre

As the Law of Sod would have it, things brightened up considerably on my descent, but as far as my original plan was concerned, the game was now well and truly a bogey. In any case, the cloud was still hanging on grimly to the summits of Sgurr nan Clach Geala and co. So it was back along the south shore of Loch a'Bhraoin while pondering how to spend the remainder of the day, before a final meeting with the foursome back at the cars. 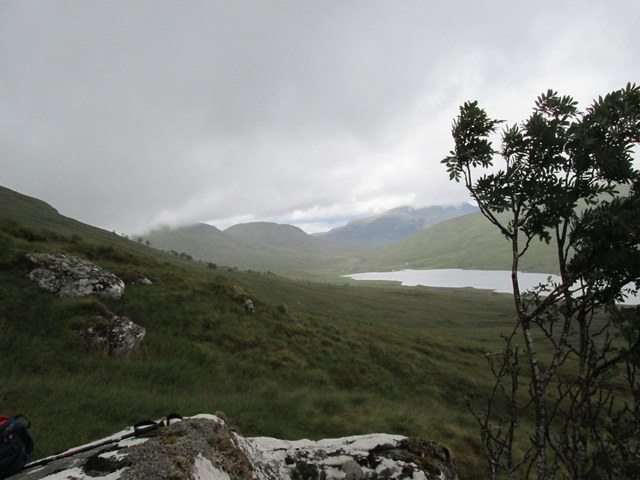 East along the south shore The road to Dundonnell and An Teallach

Pity about the weather G

Rotten luck with the weather, Graeme - it's always the same though, brightens up on the way down

Aye, you know that look then T?

rockhopper wrote:Rotten luck with the weather, Graeme - it's always the same though, brightens up on the way down

The mind boggles imagining what you initially thought I meant!