That Glascarnoch Corbett then bust!

That Glascarnoch Corbett then bust!


Things had brightened up considerably by the time I was back at the car after the two western Fannich Munros, enough to dampen my earlier convictions that the best way to spend the remainder of the day was to find a place to pitch the tent near the Aultguish Inn and then hole up there for something to eat and a few beers. That sounded quite appealing in itself but it's probably not the best way to spend a large chunk of day 1 of my 5 day pass!

It was still only the back of 3 and I sat in my car by the side of the Dundonnell road and perused the maps and associated mountain literature. In the end I settled on the Corbett with the unfeasibly long name to the west side of Loch Glascarnoch. It looked like a fairly easy up and down and I remembered a Johnny Corbett report that suggested it was a straightforward enough affair.

As I drove around towards Loch Glascarnoch to recce the best parking spot and starting point, I got a text from Kev asking how my foray into the Fannichs had gone. I reported back and told him I was now on the lookout for another route to fill the rest of the day. His reply strongly advised against the Am Faochgach bogtrot (which I wasn't really considering for today, although possibly it was an option for some point over the next couple of days).

I settled on parking up next to the little weather station just north of the Abhainn an Torrain Dubh bridge and texted Kev with the outcome of my deliberations. I simply said I was doing the Corbett near Loch Glascarnoch. Considerably easier than trying to text the name of the damn hill!

Then I was off the short distance down the road to the start of the forestry track signposted for Beinn Liath Mhor Fannaich. Meall Daimh and the Corbett from the bridge 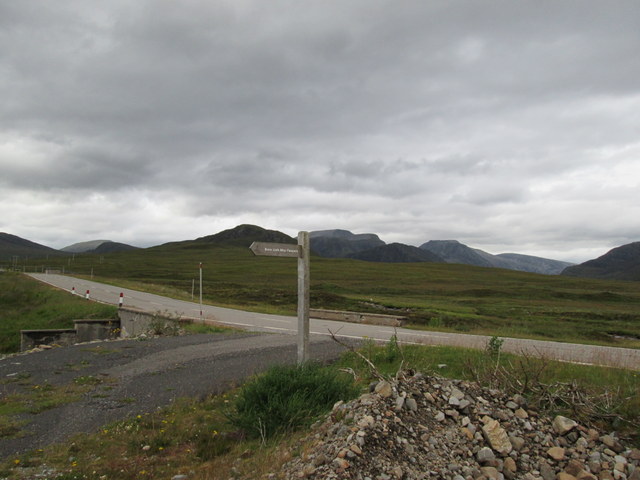 Beinn Dearg and Cona Mheall from the start of the track

For this approach (as opposed to from further south between the plantations and over Meall Daimh) the book simply suggests that you follow the forest track south and "leave the track at a suitable point and ascend the west ridge to the summit". The track made for good going and although the forestry looked quite new and not at all grown up, I made the most of the track until reaching a point where carrying on would have been counterproductive, at which point I took to the hillside.

It was a very straightforward ascent on short grass, interspersed with bouldery sections. Another text message from Kev asked if I was combining the Corbett with the Graham. What Graham? Have I missed something here? I didn't recall any Graham that could be combined with this Corbett and surely wouldn't have made such a schoolboy error in my planning! It was at this point that my signal started failing so I was on my own, with only the prospect of a rogue Graham to keep me company!

The views back down over the Dirrie Mor and Loch Droma were opening up with every step but more impressive was the vista opening up over Loch a' Garbhrain and Loch Coire Lair, right into the guts of the Beinn Dearg group. The menacing sky overhead just added to the sense of grandeur and I prayed for weather that would do these hills justice tomorrow. Northwestern flanks of the Corbett As I thought about Kev's message, I assumed he must have thought I was doing Beinn Enaiglair and therefore was referring to the Graham of Meall Doire Faid. I had thought about them but was keeping them up my sleeve as a possible part of the route tomorrow.

So I walked on and soon reached the expansive summit of the unfeasibly lengthily named Corbett. The views were well worth the effort and I would still be back down in plenty time for a few beers at the Aultguish. Beinn Dearg group and Am Faochgach from the summit cairn

Then I spotted it - a fine looking lower hill a few kilometres due south. Was this the Graham that Kev had been referring to? Surely not! A trainspotter like me would surely have been aware of the presence of a Graham round here! But it did look like it might fit the bill. And it looked like a nice hill with a good walk across - and it promised better views of Loch Fannich. Should I stick or twist? If I stick and go back to the car and then find out it was a Graham, surely that will spoil my pint? And if I twist and it turns out to be unclassified, then .......... what the hell! It's a bonny looking hill and it's still plenty early enough in the evening. Plenty left in the tank as well. Only day 1 after all! Loch Glascarnoch from the Corbett summit

It was indeed a nice wee bimble over to the 687m summit of Beinn Dearg. Beinn Dearg? There is a Graham called Beinn Dearg! This must be it! How could I have missed it? Getting sloppy G! Descending south off the Corbett towards Beinn Dearg Evening sun lighting up the flanks of Ben Wyvis

However, the cloud came in again on the summit and with it went the best of the views along Loch Fannich. I returned to the 642m spot height then contoured north west below the southern and western slopes of the Corbett to eventually pick up the Beinn Liath Mhor Fannaich track that led me back into the forestry and back to the car. 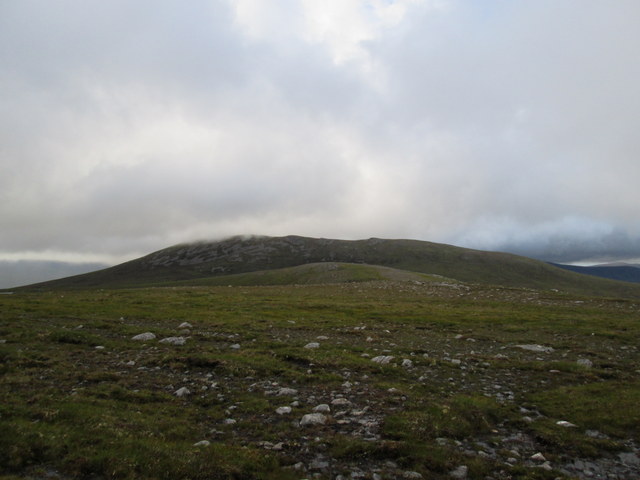 Looking back to the Corbett Looking east between the Corbett and Meall na Speireig A thick blanket over An Coileachan Contouring around the back of the Corbett Almost back on the track - Beinn Liath Bheag in the background

Right, back at the car, where's that Graham book? There it is! Index pages - Beinn Dearg? There is one, but hang on a minute, it's near the front of the book. Can't be this .......... oh wait a minute! Beinn Dearg the Graham is near Comrie, and you've done it ya muppet! Seems like this was a bum stear - not even a Sub2K! Och well - nothing ventured and all that. And it was a nice wee hill in any case, even if it doesn't appear on any man made list or classification.

Then it was off to the Aultguish for a quick pint. I had decided I would have a quick one there then drive back up towards Braemore Junction to find a spot to pitch for the night. I had never been in the Aultguish before and to be honest, I'm not sure I would rush back. As a walker, I am no great fan of wind farms, but as an individual I see the need for and merit in renewable energy sources. However, the Aultguish looked like a showhome for some renewables company, with their logo and slogans forming a mural on one side of the building and a little modern looking, glass fronted showroom off to one side. I daundered in anyway, prepared to disregard this in the name of a cold pint. Inside were the Portuguese barmaid, an elderly American tourist and a couple of Geordies in their 20s who turned out to be windfarm engineers working on the Loch Luichart windfarm. They were soon joined by another three engineers and took great pleasure in explaining their work to the rather bewildered looking American. At one point he asked them how they manage to get those things up there into the hills, to which one of them proudly and loudly exclaimed that "we get great big f**k off machinery and rip f**k out of the place!"

I drank up, returned my empty pint pot to the bar, and politely bade farewell, before heading off to find a spot to pitch up for the night.

Enjoyable read - sorry I cast doubt in your mind.
As for the engineers, I hope they choked on their own beer.

kevsbald wrote:Enjoyable read - sorry I cast doubt in your mind.
As for the engineers, I hope they choked on their own beer.

No worries. I was prepared to take my chances. The hill needed doing in any case!

Sadly, I have heard no media reports on windfarm engineers being rushed to Raigmore after ckoking on beer...........

The Corbett/Graeme combo looks great - pity you missed the views from the top. Looks like the pair could be done from the Lochluichart side too.

I've often driven by this Corbett , either on my way to something bigger or returning home from something bigger, and wondered about a quickish plod to the top and back.

May be I should. Looks a good wee hill

Looks like a nice extension to what is otherwise a rather short up-and-down hill. I assume that there was some good reason that prevented you calculating the re-ascent from the map and seeing it was less than 150m

jmarkb wrote:Looks like a nice extension to what is otherwise a rather short up-and-down hill. I assume that there was some good reason that prevented you calculating the re-ascent from the map and seeing it was less than 150m

Yeah - the reason was I couldn't remember what the drop figure was and was too buggered by then to try working it out!