We met at the lay by on the A82 a couple of miles out of Crianlarich, and set off at 9am. Rather than follow the usual path of crossing the stile and heading across the boggy field, we walked to the end of the layby and followed the (unboggy) track round to the underpass under the railway. It was a cracking day, and the forecast was pretty good so we hoped for decent views from the summits. My original plan was to tackle An Ciasteal, head across to Beinn Chabhair, and then back to the bealach and up Beinn a'Chroin and return to the car along the River Falloch, this, of course was dependant on time and general wellbeing/aches and pains/energy levels, we'd decide when we reached the summit of An Caisteal.
We stuck to the track up to the fence and once through the gate we made our way up the rather boggy climb to reach the top of Sron Gharbh. 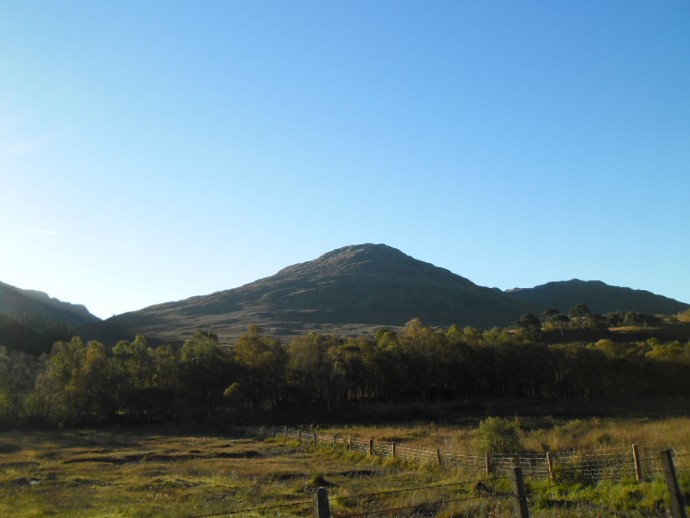 Sron Gharbh from the layby. 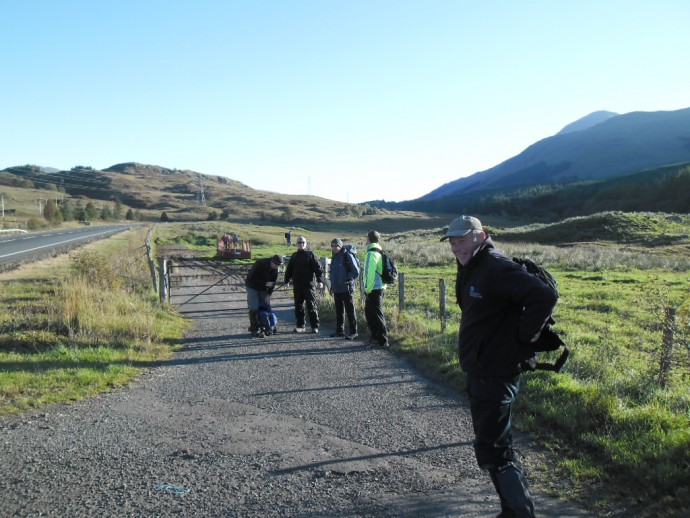 The start of the track to the underpass, no bog! 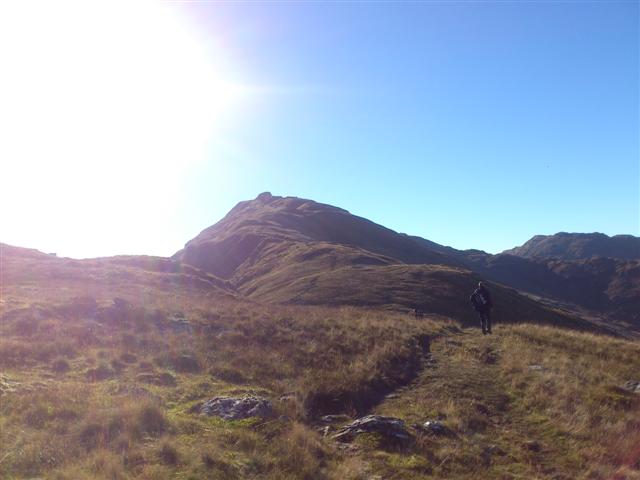 Making our way up Twistin Hill. 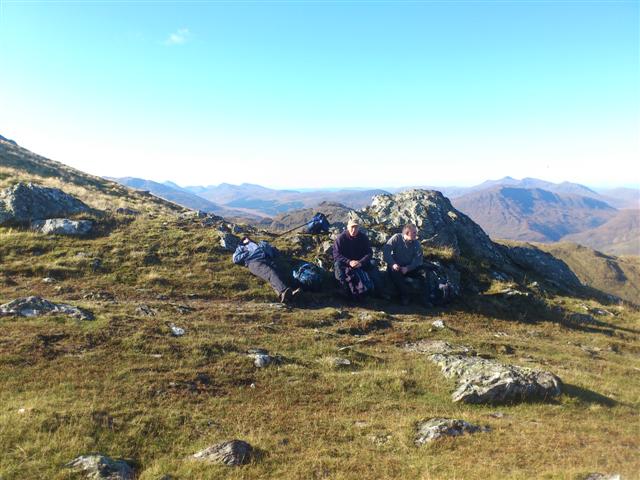 Time for a spot of brunch...and a nap as well apparently (Neil!)

We soon reached the path and made good progress now that the bog had been left behind (for the time being at least!) , the deep cleft across the path was crossed then we made our way around the rocky outcrop, and reached the summit in just over 2 hours. The path round the outcrop. 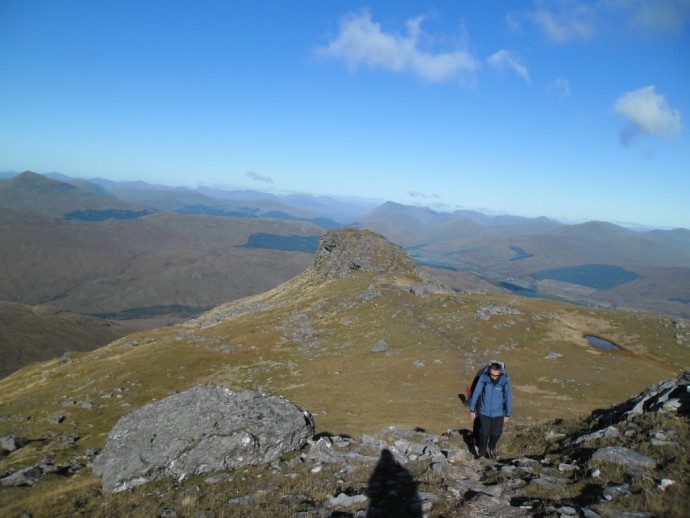 Looking back down to the outcrop (The Castle?) Summit of An Caisteal.


It was now decision time....
1. Did we have time to tackle three Munros?
2. If the answer is Yes, which one to do next?
The answer to 1. was "probably" and as a result there was some debate as to the answer of 2. As AnCaisteal is usually done along with Beinn a'Chroin, the majority of our group decided this was the way to go, and if time allowed, then head back and go for Beinn Chabhair, so off we went, down to the bealach and then up to the West Top of a'Chroin. Beinn a'Chroin from the path down to the bealach. Beinn Chabhair from the path down to the bealach. 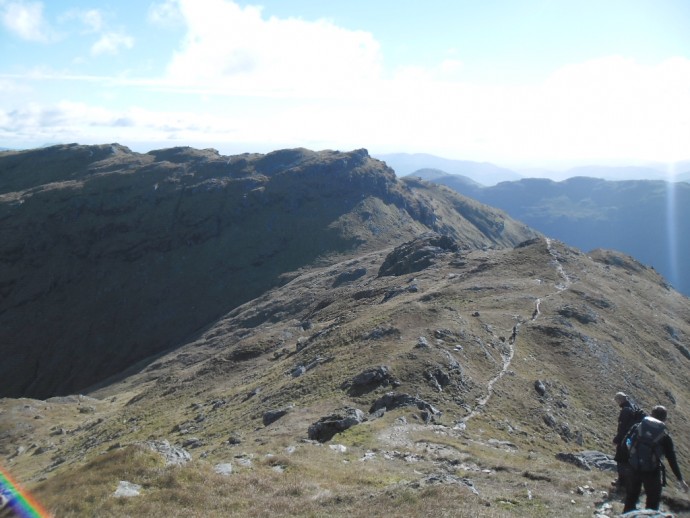 The path to Beinn a'Chroin. The way down, just to go up again on the other side!

The path up Beinn a'Chroin is pretty good, there's a bit of scree and so is a wee bit slippy in parts, but we just took our time and reached the top quite easily, I enjoyed the wee scramble up the short steep bit, but I wasn't looking forward to coming down this bit! The summit of Beinn a'Chroin. 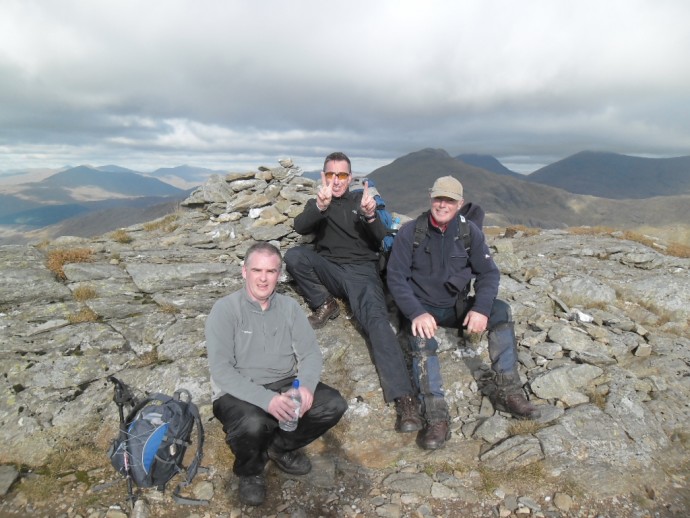 
We had another minor debate about whether to go for the third summit, and as we still had 5hrs of daylight left, three of us felt we had plenty of time, the other three had their doubts, and were quite happy to call it a day and head back down to the cars, I fell into the "go for it " camp and was pleased when one of the others said he'd head back down and see what was involved. YAY!!! This bit was fine coming up, but I wasn't looking forward to it on the descent! It was quite easy actually!

So we retraced our steps, and a quick timecheck at the bealach showed we still had 3 and a half hours of daylight left, that SHOULD be okay, surely!! We headed off to the left, initially following a faint path, which very soon petered out and we scrambled down over grassy tussocks and rocks, some boggy areas but nothing too bad. We soon reached a small lochan and stopped for a break looking up the side of Beinn Chabhair, there was no discernible path so it was pretty much a hands on scramble up more grassy tussocks and rocky patches, a couple of level areas were welcome and we reached the summit at 4.45, leaving us an hour and a half to get back down. The views were fantastic and if we'd more time I'd have liked to spend a bit of time up here taking it all in, but a few quick pics and off we went, looking for a path to take us down to Allt a'Chuilinn and then on to Derrydaroch farm. The way down to the wee lochan. Beinn Chabhair, a good hands on grassy/rocky scramble for most of the ascent, I liked this bit! The path down to Meall nan Tarmachan. The rugged (and boggy) way down.


I've been told at work never to assume anything as it often makes an ASS (of) U (and) ME (ASSUME...geddit!) I should have borne that advice in mind on this walk as I knew we should be looking for a burn and it should be to our left, so we kept to the path and when a burn appeared on our left I assumed it was the burn we were looking for! We had maps, compasses, GPS...the lot, but seeing the burn,we didn't bother checking them as we thought this was it and just followed the path/track all the way down, keeping the burn on our left. The sun had set and we were still on our way down, so the torches came out and we continued our descent by torchlight which slowed us down a bit. I'd realised that we weren't where we should be but the sensible thing seemed to be to stick to the path rather than take off over pathless moorland in the dark. The path, which I have to say was in pretty bad nick, very eroded, rocky and very boggy higher up, (I went in up to my knee at one point) led us down to Inverarnan and the Beinglas campsite, six miles from the layby where our cars were!!! A brief chat with one of the campers resulted in the drivers getting a lift back to the layby (many thanks to this nameless good samaritan!) while Neil, Dougie and myself enjoyed a couple of pints in the campsite bar....Harviestoun Bitter and Twisted?? Don't mind if I do, Ta! Lesson learned? Well, listen to the others in the group when they say they've had enough, especially when the days are getting shorter, and more importantly.... USE THE MAP, and NEVER ASSUME!! That said, no harm was done and we all made it home safely, just a bit later than we'd planned!

Did these 2 last month. Left Chabhair for another day. Bet they pints tasted good after the day yis had

Certainly did Kev, they went down a treat! It was a great day, but we really should've stuck to the two summits, but every day's a school day as they say!

great effort guys. planned to do all 7 yesterday but the (unexpected) rain came on at the summit of An Caisteal, where i found to my cost that my waterproof overtrousers weren't breathable. Resulted in soaking wet Craghoppers which couldn't breathe / dry due to the overtrousers not letting out the sweat so i abandoned after Chabhair.

Still, as you say, every day's a school day and i've left myself a nice wee 4 circuit to the east for another day when i have proper waterproofs.

Cracking day you had there,,I did these 3 on a solo trip last year but did Chabhair first from Derrydarroch then a'Chroin and off down Casteil...didnt even want to contemplate the trek over from Inverarnan lol