Sunshine, warm temperatures and hardly any wind seemed to be the weather from Monday to Friday for most of July, followed my rain during weekends.

I had hoped August would bring an improvement, but when yet again rain was forecasted for the weekend, my plans had to get altered. Checking 4 different kind of weather forecasting sites and my Munro map it looked as if the west would be dry until late Saturday afternoon - perfect for the 2 Loch Lochy Munros. 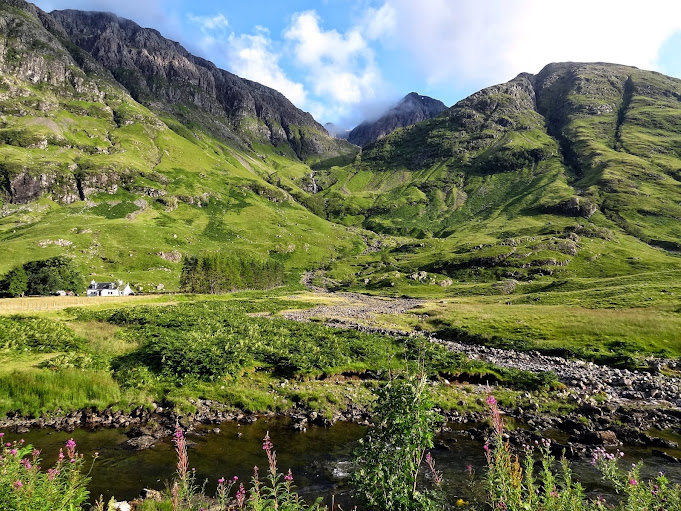 Good bye sunshine...during my drive up through Glencoe 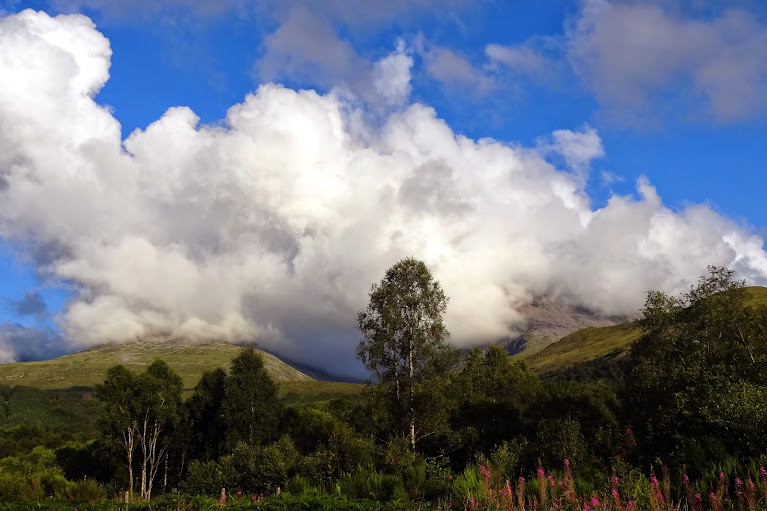 The first clouds around the Ben 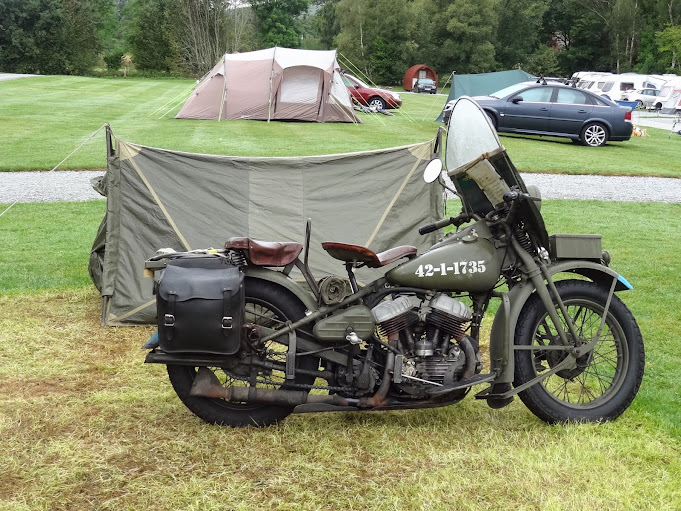 Spotted this on the camp site...hard core camping! Cool!

By the time I had packed my camping gear and met Lynne in Spean Bridge it was 8am. Low clouds were draped around the mountains and driving to the starting point, I had the sinking feeling that we would probably walk in the clag all day.

When we arrived we saw a car and a couple unpacking their bikes. Was that the car park? Undecided we decided to drive on and promptly without realizing it, ended up Great Glen Way

Realising our mistake we returned, while earning some funny looks from the couple now on their bikes...ups. 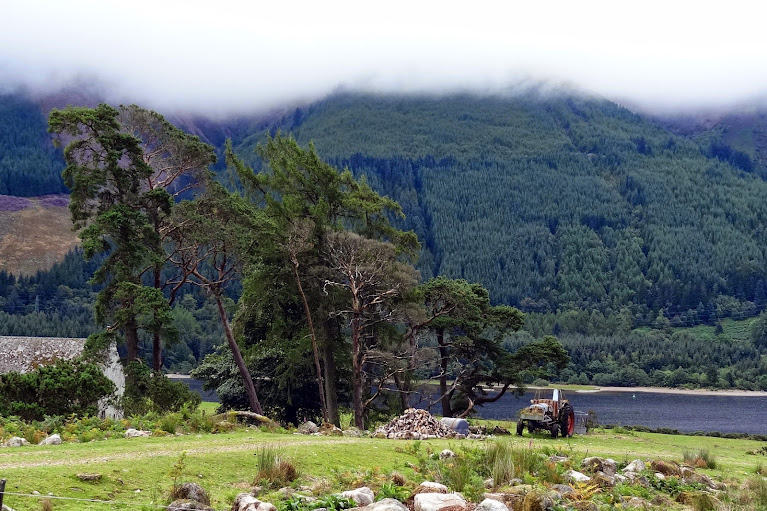 At Kilfinnan with views towards Loch Lochy

With the car parked and gear packed, we set off. Ok we did not set off, we stormed off in order to stay dry as long as possible.
The walk along the forest track was pleasant and we covered the distance to the track up the hill in no time. The path was steep in places, but a lot better than I had thought, considering we started at loch level. By the time we had reached the open hill site, clag covered the hills. Praying for the weather to improve, we moved on, but God must have been busy elsewhere, as a slight rain set in. Continuing the speedy ascent, by the time we reached the bealach ,we managed to catch up up with the couple on the bikes

..much to our amusement and their disbelief! 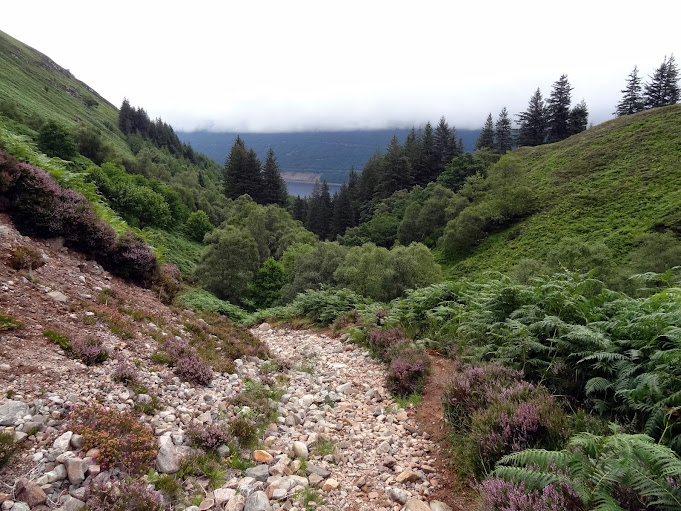 Views back after the forest 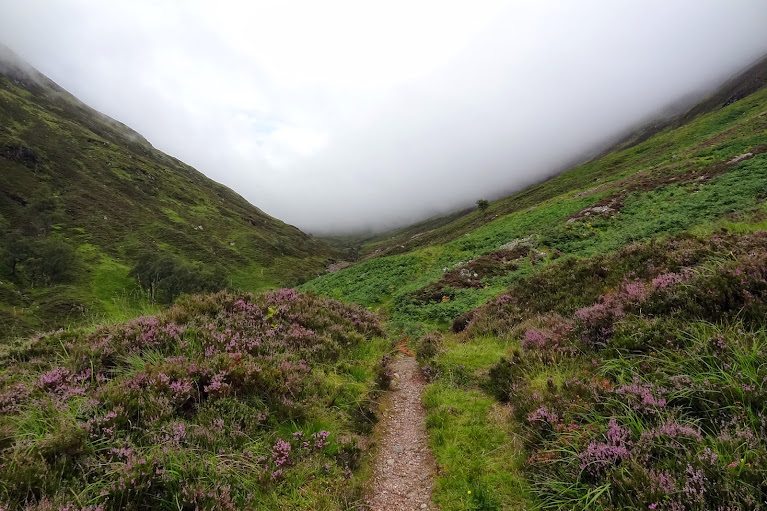 From the bealach the first Munro of the day was to be Meall na Teanga. A faint, yet easy to follow path lead us into the clag. With hoods deep in our faces we reached the cairn, took some photos and not wanting to linger ...(no views anyway) we walked down the hill with breakfast in our hands. When we stepped out of the clag, we realised that the views had improved a tiny bit and we had glimpses across the open moorland...rather stunning even with the rain, but we were sad to have missed the views from the top. 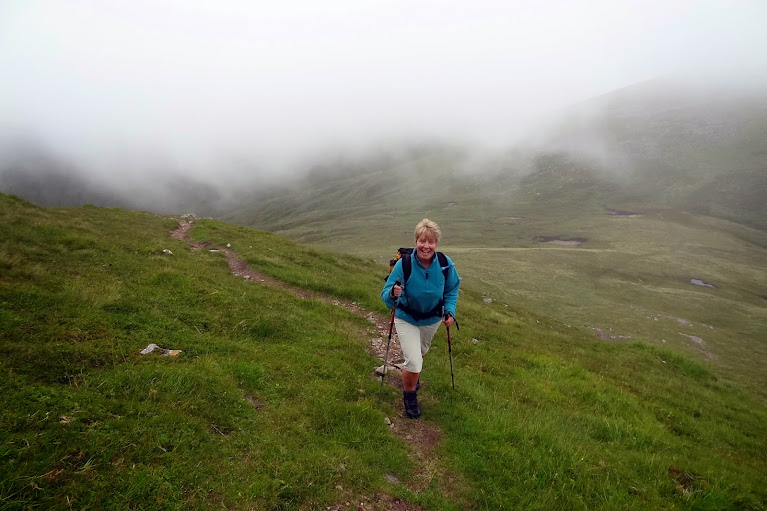 Lynne on the way up Meall na Teanga 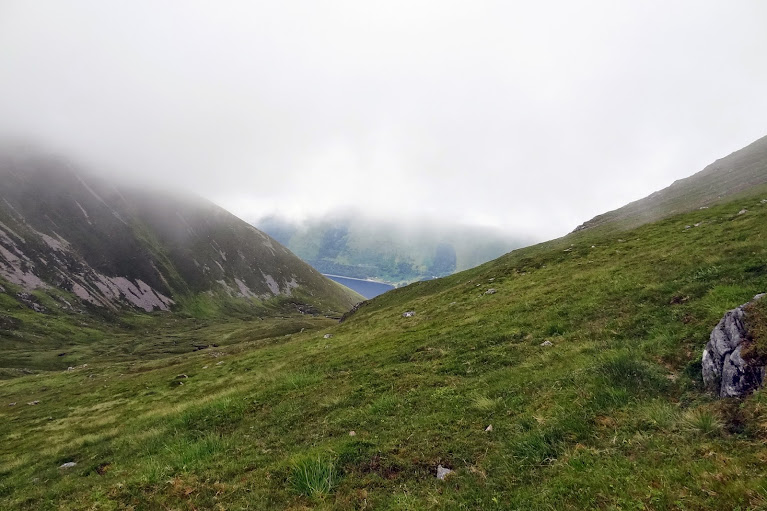 Can this clag please lift? 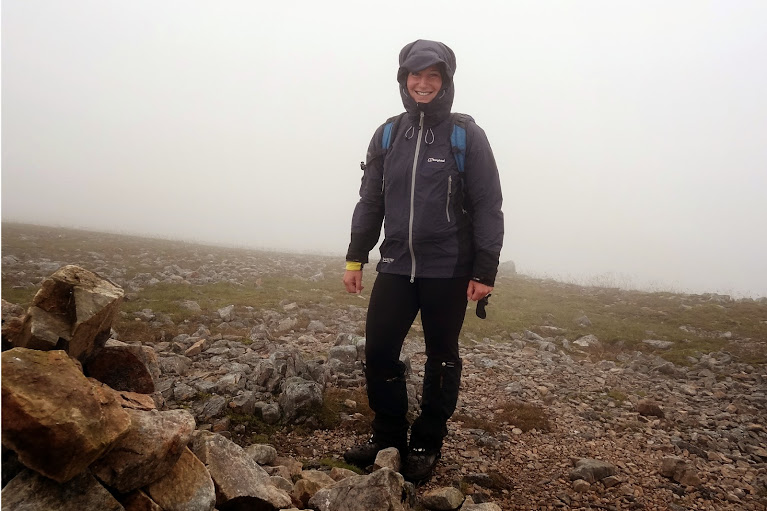 At the first cairn 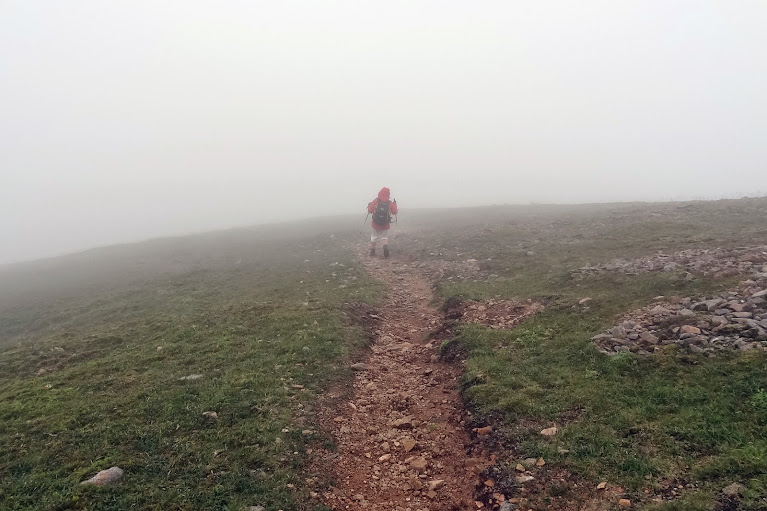 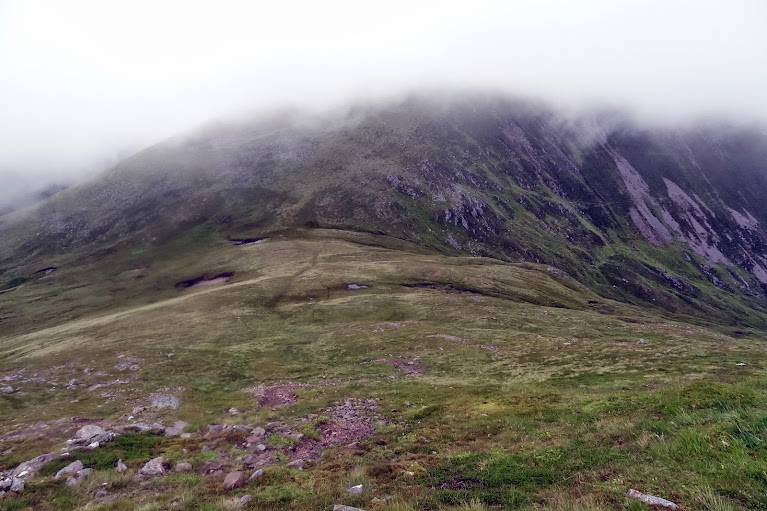 It is still rather lovely 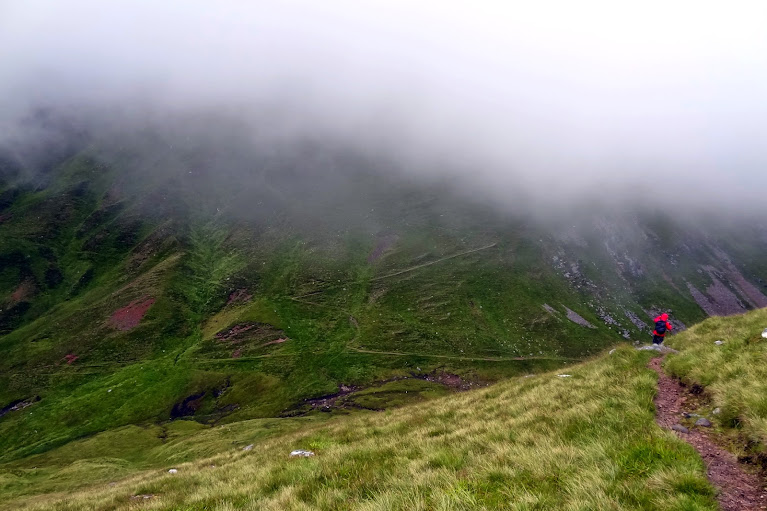 The zigzag path up the other site

Back down at the bealach Lynne asked me to lead the way up the next Munro. The zigzag up hill was great, but with rain and strong winds I stormed off maybe a bit too fast, as soon we were gasping for breath. We met the couple on bikes again, who still struggled with the fact that we over took them.

Chatting with them about the fact that neither of us would have views on the next Munro, we moved along. The path disappeared close to the top and with thick clag we had to use the GPS to find the cairn. At the top 180C of clag could be admired, but at least the rain had mercy, as it stopped briefly. Time for lunch.
The cold wind and rain finally made up leave the summit and we both agreed that at some point we would have to get back to enjoy the views. 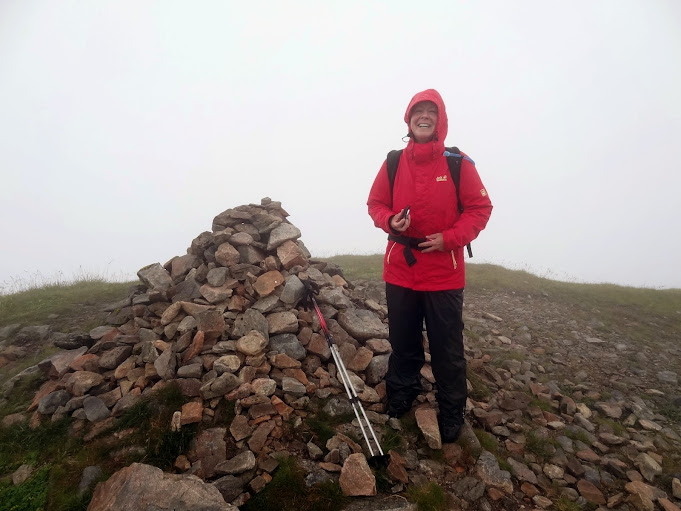 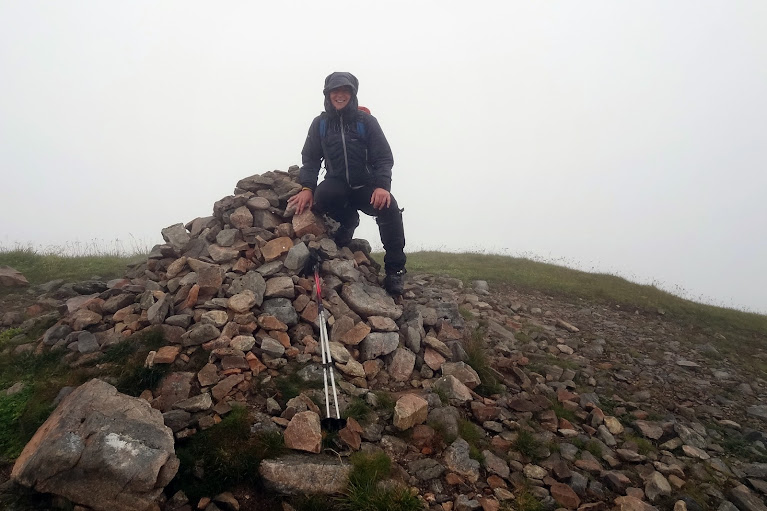 The walk back down the hill was easy and we made good time. Looking back frequently to see if we could spot the couple on bikes (we could not) we reached the forest track and decided that they could not overtake us. Walking back to the car, we must have broken every record in speed walking

and sweaty and soaked we reached the cars 6h after setting off...without being overtaken haha. During our drive back to Spean Bridge the heavens opened and it started to chuck it down. Over a huge pot of coffee in the Spean Bridge Hotel, we congratulated ourselves, as least we had missed most of it and hopefully the next time the weather would improve. 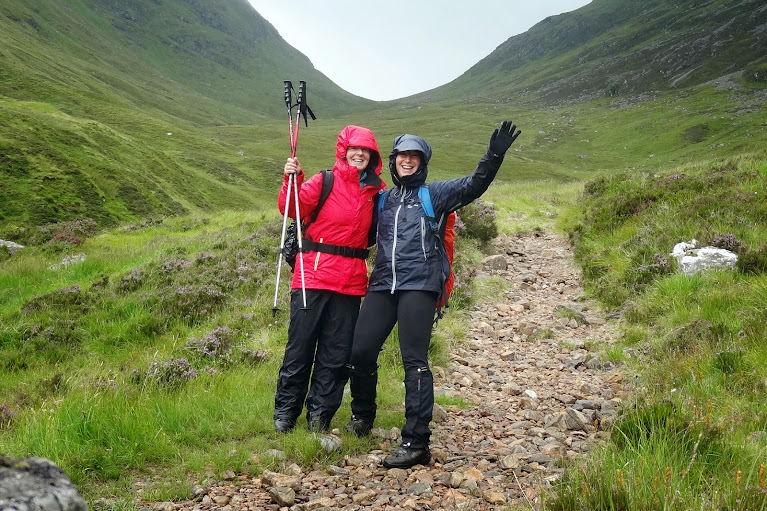 It might rain...but it could not dampen our spirits

Nice report - these are high on the to do list though I think I will wait for a view!!

Pity about no views but it's better than having a workout in the gym. That was an impressive speed for those two!

Love the first two photos. It's amazing how quickly the weather changes and it never seems to dampen your spirits!

Great report and brill pics, as per the norm ML

goth_angel wrote:Nice report - these are high on the to do list though I think I will wait for a view!!

Yes certainly wait for the views!!

dogplodder wrote:Pity about no views but it's better than having a workout in the gym. That was an impressive speed for those two!

Lol many thanks! As for the workout- jep the hills beat the gym every time!!

AnnieMacD wrote:Love the first two photos. It's amazing how quickly the weather changes and it never seems to dampen your spirits!

I find it hard to be miserable up a hill...

razzah wrote:I walked these 2 hills a month or so ago and had the same conditions as you experienced

At least you had some glimpses...I think the most exciting view was Lynne bag of Jelly Babies that day

MunroMadMen wrote:Great report and brill pics, as per the norm ML
G

Hope to do these two this weekend, probably Sunday. 6hrs is a good time i'll be happy with 7hrs.

Love this report, quite new to the Munro game. This has given me confidence it will be a lovely couple to conquer when the weather is good. Thank you for the photos too