Takes the high wire with no complaining for maiden Munro

Takes the high wire with no complaining for maiden Munro


It was one of those days that nearly didn't happen. Gizmogirl had a lunch date she didn't want to miss but it was the only day with decent weather. In fact seriously decent weather - 90% on MWIS. So gizmogirl did what most of us smitten with the virus that makes us trudge through bracken, bog and river to reach high places would do - she sent her apologies for the lunch date.

It wasn't going to be a long day, just a simple up and down to bag the remaining one of the Ring of Steall I'd not yet done - An Gearanach.

An Gearanach from Stob Coire a' Chairn 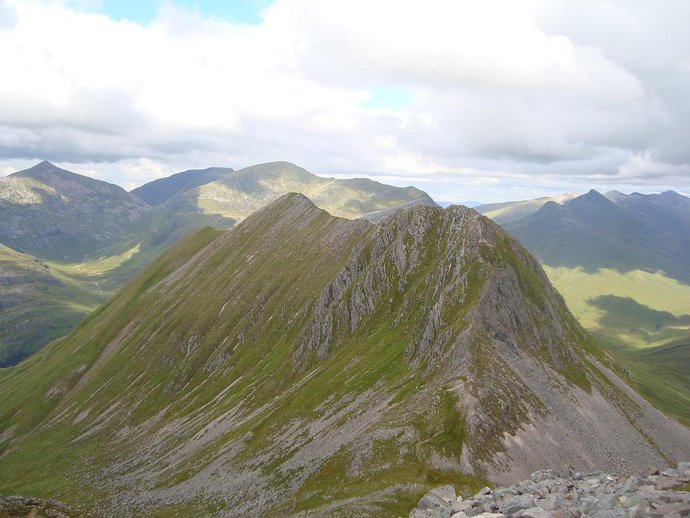 We picked up Sally (all set for her first Munro) and drove down a misty Great Glen. Inverness in clag, Drumnadrochit in clag, Fort Augustus in clag, Invergarry in clag, Spean Bridge in clag. By the time we reached the turn off to Glen Nevis (in clag) we weren't in the best of moods and beat the first coach party into Edinburgh Woollen Mill for coffee, toast and marmalade to mull over our options. I even told the woman who made the toast about the forecast being so wrong hoping she as a local could perhaps shed some light on the situation. She looked at me with a slightly pitying expression that said if you folk want to go off and climb hills you deserve whatever you get.

Call me an optimist but when MWIS says 90% I expect the cloud to lift. So we agreed to head in to Glen Nevis and through the alpine gorge to the wire bridge where we'd make the final decision about going up or further along the glen. When we got to the bridge it still wasn't looking hopeful and motivation for crossing wasn't high so while we dithered Sally decided to cross anyway.

Showing how it's done on the wire bridge Sally made it look easy but she's taller than us and our first challenge would have been to heave ourselves on to the launching pad, never mind cross. Whatever else we decided to do we agreed that if there was another way to negotiate Nevis Water the high wire was not for us.

And just for variety she paddled back A friend once told me she paddled across in her boots rather than follow her very tall new husband over the wire. He was dismayed to see her getting wet boots at the start of the Ring of Steall but she didn't want to make a fuss because it was their honeymoon! I thought about her as I tried to psyche myself up for it but the water level was low so for me there was no contest.

But all of this was academic because it didn't look like we would have to cross as disappearing into clag was not part of our plan. So after wasting a bit more time feeding the chaffinches we agreed on a low level walk up the glen. Following the path up the side of the river we noted how easy it would be to cross, took a few photos and wandered on. I felt bad for Moira that she'd pulled out of something she'd wanted to do and had had the long drive for no hill.

Then about 20 minutes into the walk up the glen the sun came through and (bolstered by knowing MWIS said 90%) I said I was pretty sure the cloud would clear by the time we were up there and we should go for it. Moira wasn't all that keen and Sally said she didn't mind but my confidence it would clear tipped the balance and we returned to the crossing point we'd seen earlier. Boots off and sandals on and we paddled across, avoiding in one nifty move both the wire bridge and the slippy rocks at the foot of the Steall Falls. I hid my wet sandals under a bank of turf for the return and we picked up the path over another stream and up the side of a badly eroded gully to a series of zigzags, gaining height quickly.

Looking back to where we crossed The sunshine that persuaded us to start the climb had been short-lived and the cloud thickened. Then the rain started and there we were slogging up a steep hill in waterproofs and seeing nothing. I didn't say anything but I knew at this precise point I wasn't flavour of the month and if things didn't change dramatically I would lose whatever slight credibility I might still have and never be believed again! An Gearanach means "the complainer" - no idea why but it went with the underlying mood quite well! 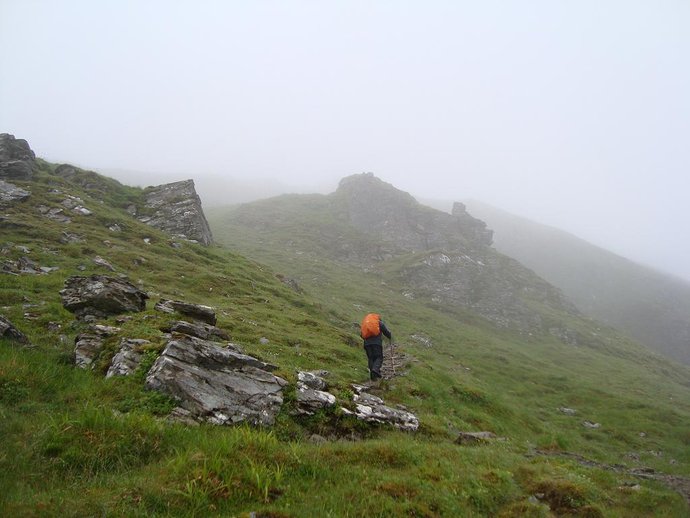 I took a photo of an interesting rock because there was nothing else visible to photograph. We reached the narrow grassy ridge (said to be delightful but who would have known?) which led easily along to the final short climb to the summit.

It was Sally's first Munro - and she couldn't see a thing which probably disappointed me more than it did her.

Uncomplaining on The Complainer! Okay so I said I was sure it would clear..... but I was wrong and it didn't 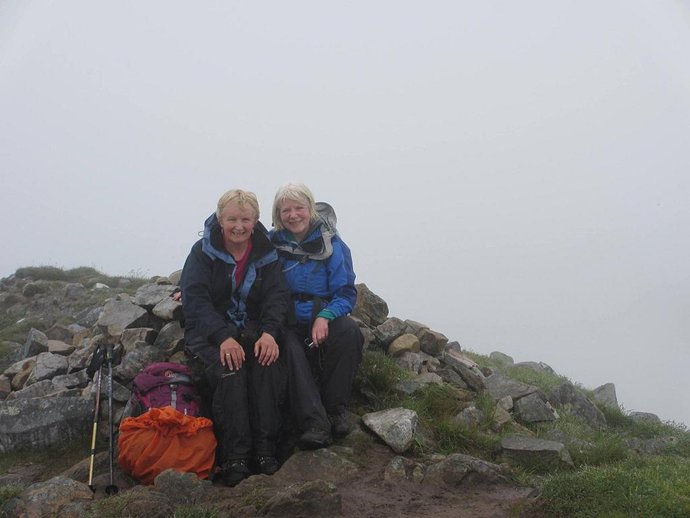 So we sat at the cairn in the rain and ate our damp sandwiches. I was mostly disappointed for Sally that she'd missed seeing what should have been superb views of the Ring of Steall, the rest of the Mamores and Ben Nevis. To her credit she said she was delighted to have climbed her first Munro and wouldn't be put off climbing more. When we stood up there had been a slight break in the cloud and we started to detect the shape of other hills through the murk. Then we got a brief glimpse of the continuation of the ridge. The mood was still subdued as we started our descent. We don't often summit in clag but we know others who do - so we'd better be philosophical about it, just as they are. Then it happened.

The cloud lifted and we could see the ridge ahead 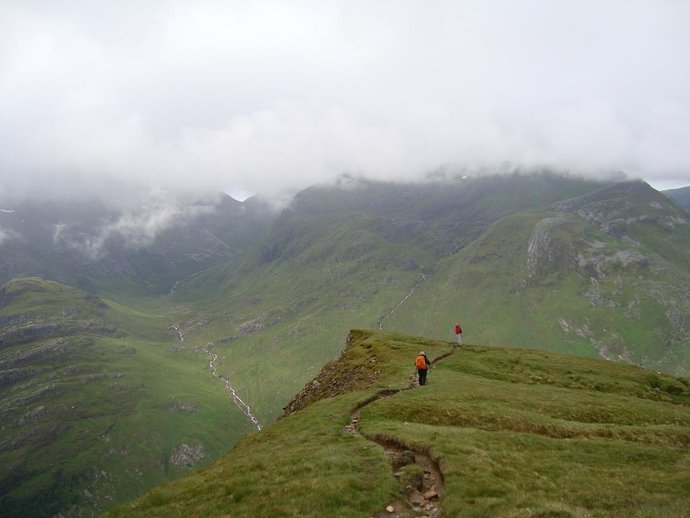 Glen Nevis down below Across the Ring of Steall 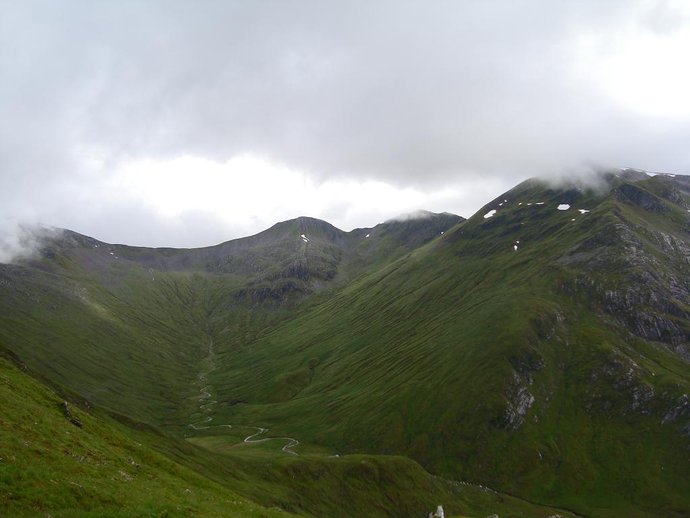 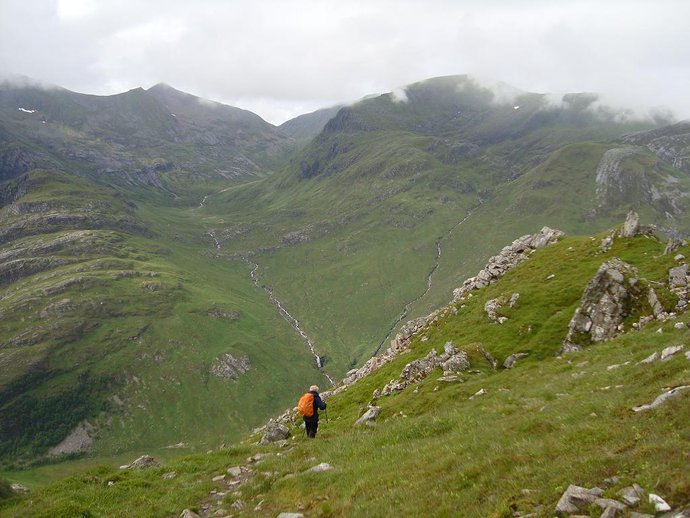 The traverse across the corrie We passed a couple who had gone up in the morning intending to do the Ring of Steall but with poor visibility had taken a wrong turn and ended up climbing the wrong hills and heading in the wrong direction. When they realised they weren't where they should be they retraced their steps and came back down via An Gearanach. Drying feet after the paddle An Gearanach, as so often happens, now annoyingly clear In the end we were all glad we'd done it and glad too that we delayed going up so we at least got some views on the way down!

Re: Refused the high wire to climb the claggy complainer

Good for you for waiting for the 'forecast'! It's just magical when the cloud clears like that - worth the misty climb in my book. And congratulations to Sally on her first Munro - I'm sure it will not be her last.

Re: Refused the high wire to climb the claggy complainer

AnnieMacD wrote:Good for you for waiting for the 'forecast'! It's just magical when the cloud clears like that - worth the misty climb in my book. And congratulations to Sally on her first Munro - I'm sure it will not be her last.

Thanks Annie, you've reminded me the focus of this tale is Sally's achievement and not us and I've changed the title to reflect that!

I don't think I would fancy that wire bridge! I don't have the best balance so would be sure to fall in. Love the shots of the clouds lifting, I always think these types of conditions add atmosphere.

you do look like you and Moira are trying to put a brave smile on at the summit - but so wonderful when the cloud lifts.

Sarah86 wrote:I don't think I would fancy that wire bridge! I don't have the best balance so would be sure to fall in. Love the shots of the clouds lifting, I always think these types of conditions add atmosphere.

I'm sure it would be fine if there was no drop - and I reckon it helps to be tall.

Huff_n_Puff wrote:It can be magical when the weather gradually clears like this - well done to you all for sticking with it and reaping the rewards

Yes, I think you appreciate the views more when you've been denied them.

mrssanta wrote:you do look like you and Moira are trying to put a brave smile on at the summit - but so wonderful when the cloud lifts.

Hmm.... that's a sheepish smile from me and Moira's probably suppressing an urge to quietly throttle me.

The pictures are amazing and they just want me head back to Glen Nevis...its such a lovely place. Well done to Sally! Thats a great first Munro!!

Mountainlove wrote:The pictures are amazing and they just want me head back to Glen Nevis...its such a lovely place. Well done to Sally! Thats a great first Munro!!