BeinnAchaladair2014-09-06.gpx Open full screen  NB: Walkhighlands is not responsible for the accuracy of gpx files in users posts

I woke up with my alarm at 6am on Saturday morning. Feeling sleepy and lethargic (the result of a few glasses of wine the night before), my mind was on yesterdays so-so weather predication of low cloud, poor visibility and a virtual guarantee of rain. Heading back to the land of nod seemed the better option, but I forced myself up, put the kettle on and checked the forecast again ... The weather had changed for the better! Not exactly 'scorchio' but enough to brighten my mood and get me moving.

I got to Achallader Farm just after 8am and was initially puzzled by a new car park only a few metres off the A85. The car park I was expecting, from the OS map and the WH description, was near the farm itself. Reading a sign on a gate across the track stopping further progress of unauthorised vehicles, it dawned on me that the car park had been moved and this was to be my start to the walk.

I had planned to walk as per the WH description and do the round clockwise, but just after the car park there's a 'Hill Path' sign. Although the path appeared to head for Coire Achaladair, i had already encountered an unexpected change to my route in the car park, and wasn't sure if this path was maybe a diversion around and away from the farm buildings ... which would have been fair. Rather than start down the track towards the farm and potentially having to retrace my steps back if the route was blocked, I decided to follow the sign and path which did indeed lead my to Coire Achaladair and reversal of my planned route. In hindsight, I could have continued with my original planned route, but I was happy enough with the change and the climb and views up the coire.

Reaching the top of the coire, the routes turns sharply North up the broad ridge towards Beinn Achaladair. There's a cairn at the top of the ridge before a dip and a climb up to the south top of BA and another cairn. The true summit cairn is further on with cliffs dropping away on the NW side. Visibility had been coming and going which had me stopping for photo breaks at each cairn (without checking the map

I initially lost the path coming off BA. I could see the bearing towards Meall Buidhe was a very steep rocky drop and could not possibly be the path! Following my judgement I went for the less steep slightly off South direction, always walking a bit further to see how far down I could see, and again if it looked okay. This led me more to the west and I picked up the path again on the rocky zig-zag descent. It never left overly steep, but reaching the bottom and looking back up is a bit of a 'wow' moment.

The walk up and over Meall Buidhe was pleasant and my next objective, Beinn a'Chreachain, was coming and going in cloud. The final short pull up Ba'C is rocky but a good trail leads easily to the summit. I was lucky that cloud the moved again and I had the second clear summit of the day

The descent down and passed Loachan a'Cheachain was straight forward and the only sticky moment was when I reached the small, low, narrow railway underpass which I would be sharing the with decaying carcass of a sheep while I crouched through

Knowing the bridge over the Tulla was down, I continued a more-or-less straight line, from the underpass to the river, to find an easy place to cross and then headed up the bank and onto farm track.

On the way down from Ba'C I had passed some people that were huffing and puffing their way up, it seems the walk in along the farm track takes a toll on the legs before reaching the hills. I was actually glad I had the walk back along the track with tired legs rather than have it at the start as the walk in. Doing the round anti-clockwise hadn't been my original plan, but it worked out well.

My route back was as the WH description, the only change was an extra 1k or so back to the new car park.

A good day with good weather and some cracking views

Heading for the railway bridge ... 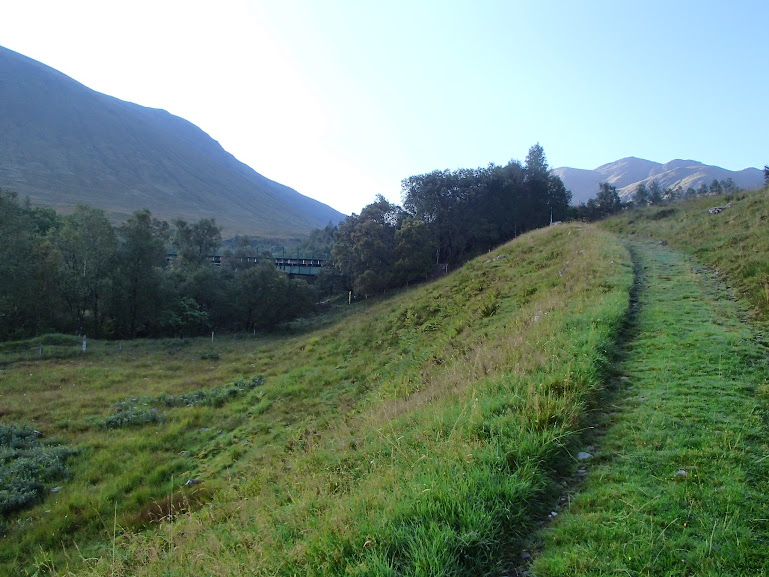 Crossing the bridge over the West Highland railway line ... 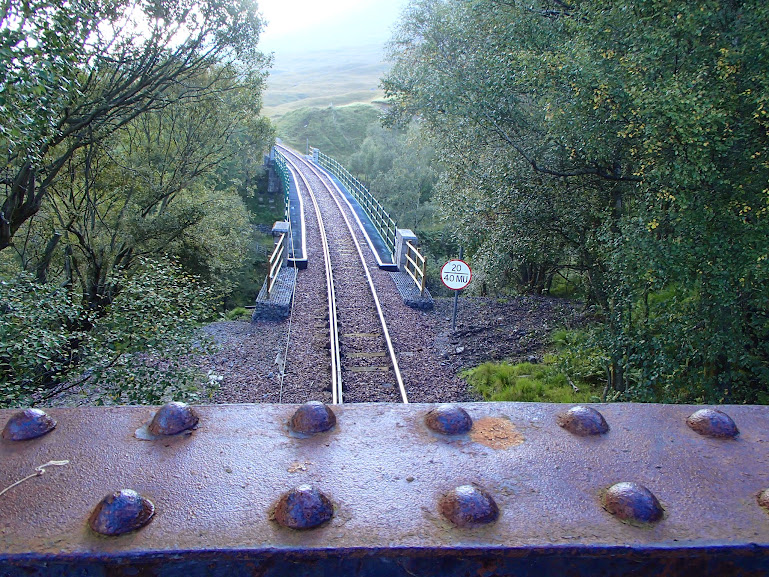 Following the path along the Allt Coire Achaladair ... 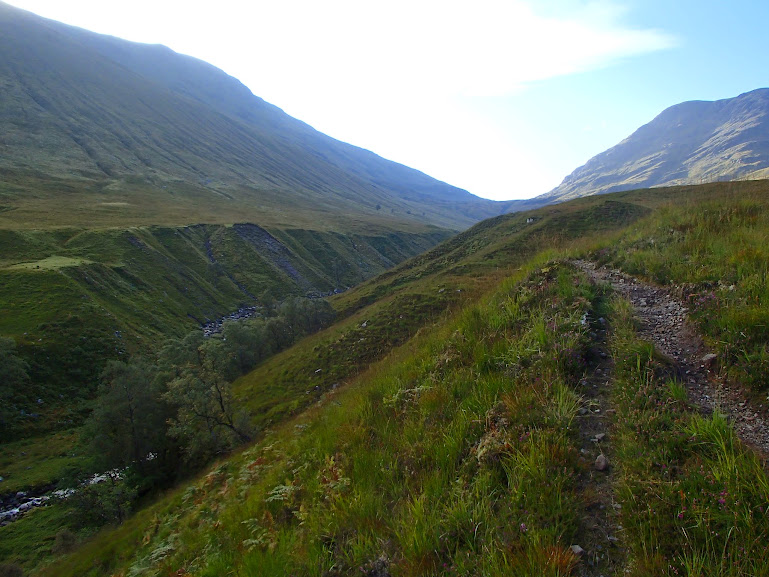 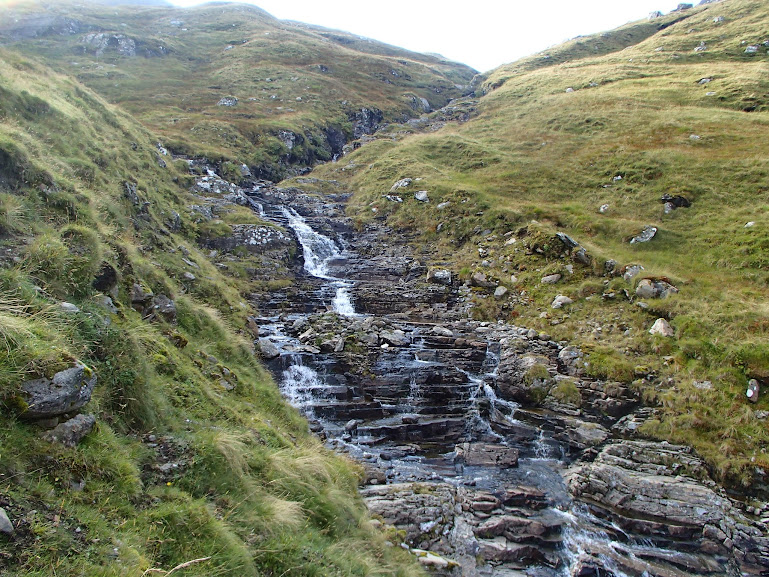 The sun begins to make an appearance as height is gained ... 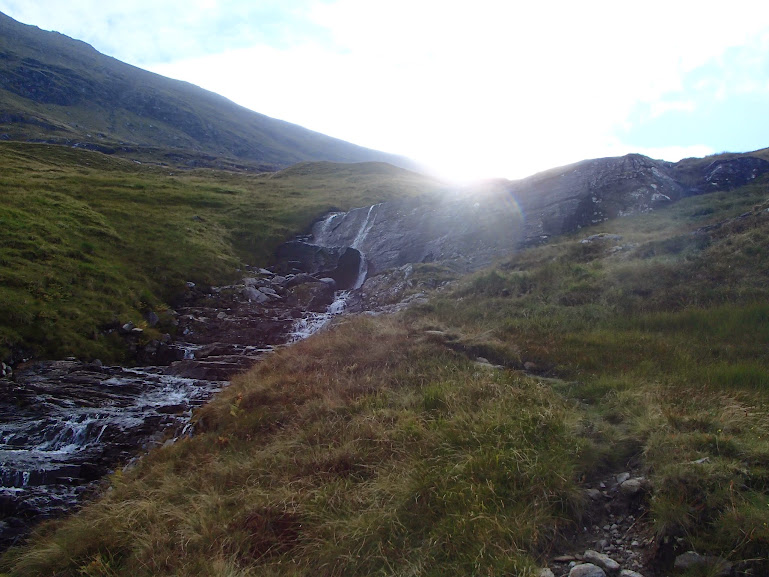 Wispy cloud hangs about when the bealach is reached ... 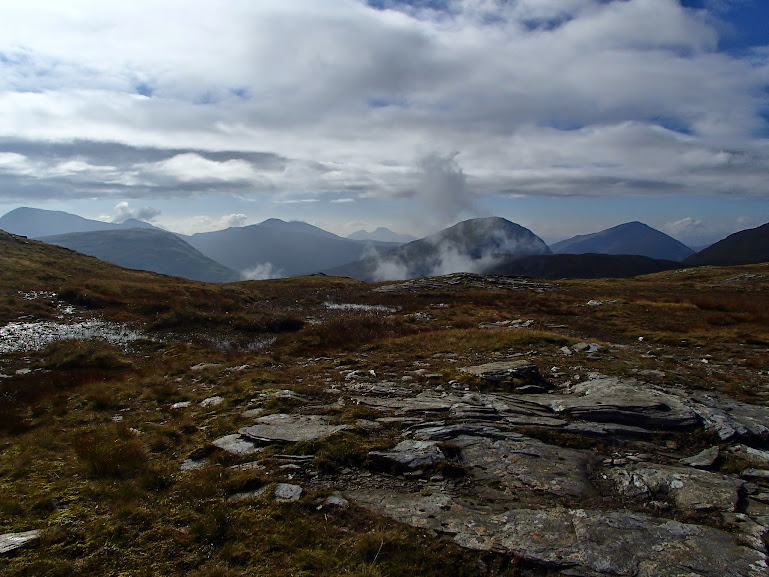 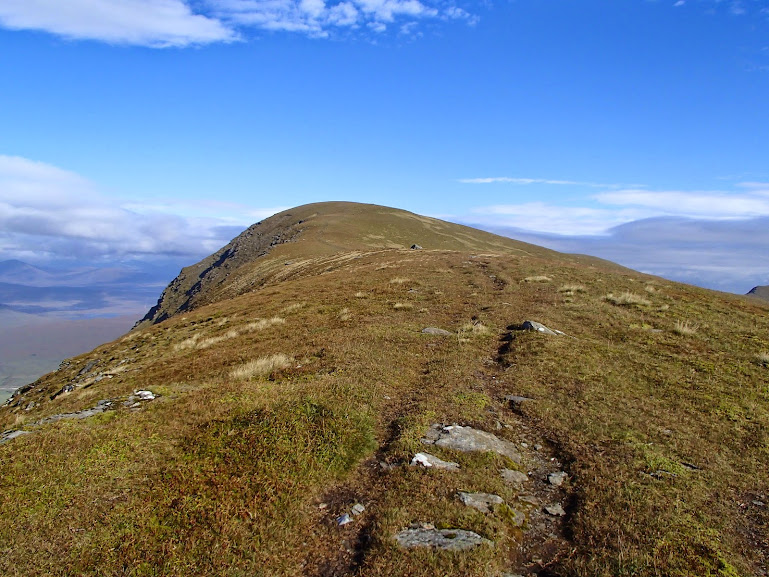 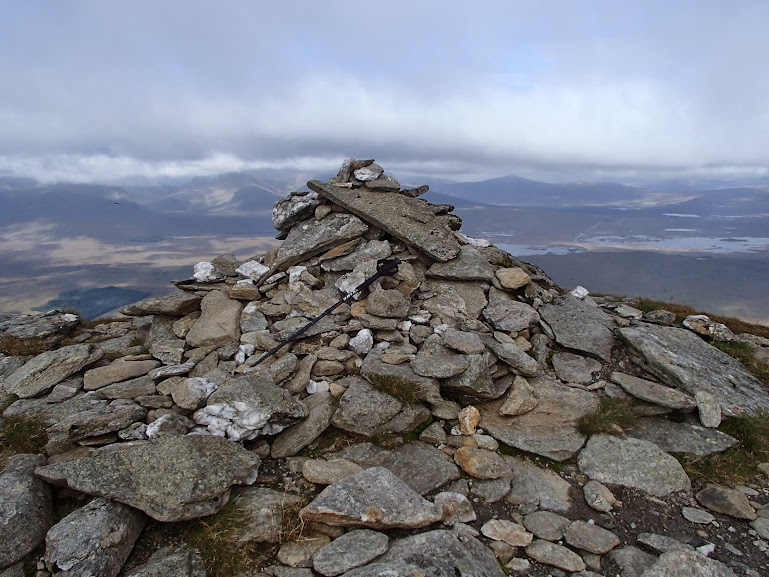 View back down to Loch Tulla ... 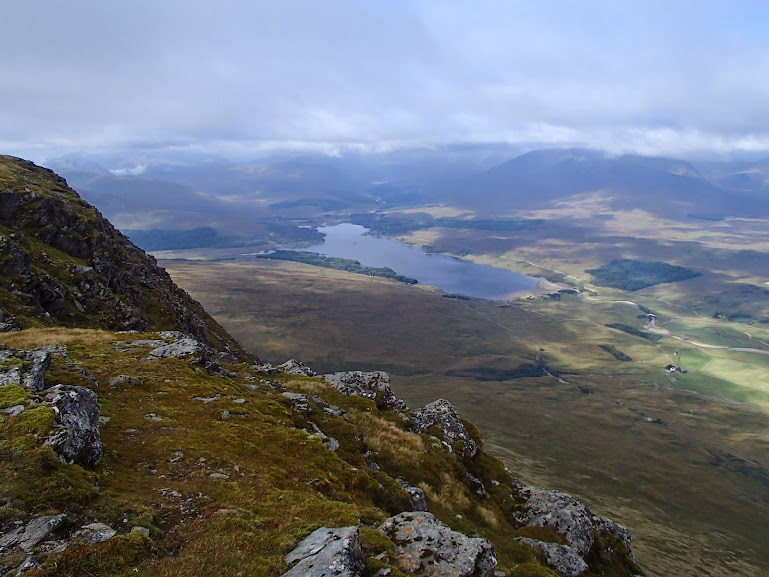 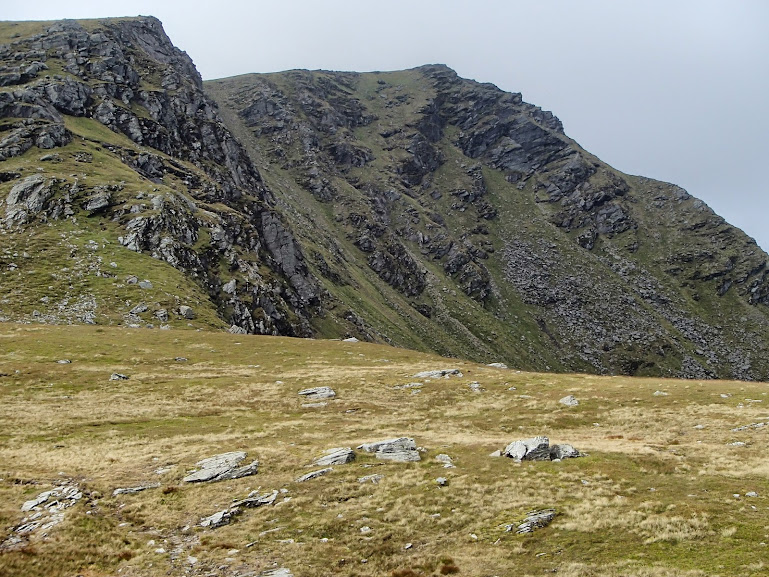 The cairn on Beinn a'Chreachain comes into view ... 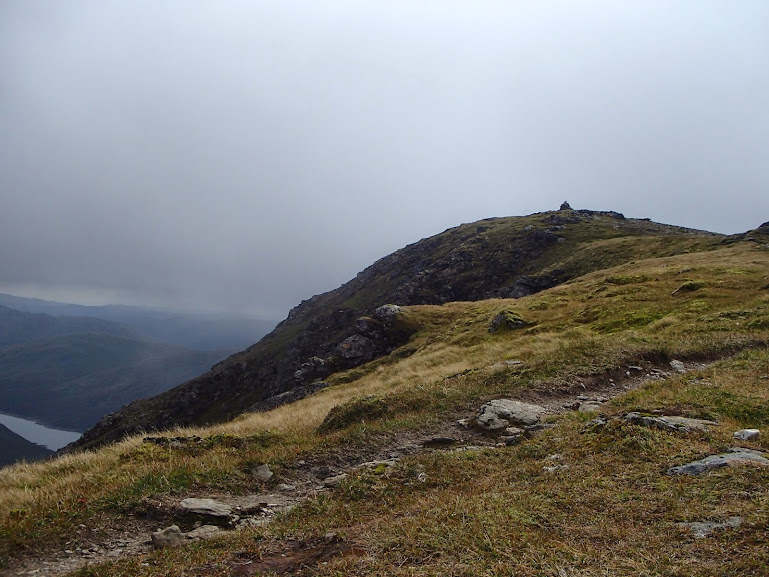 The second summit of the day reached, Beinn a'Chreachain ... 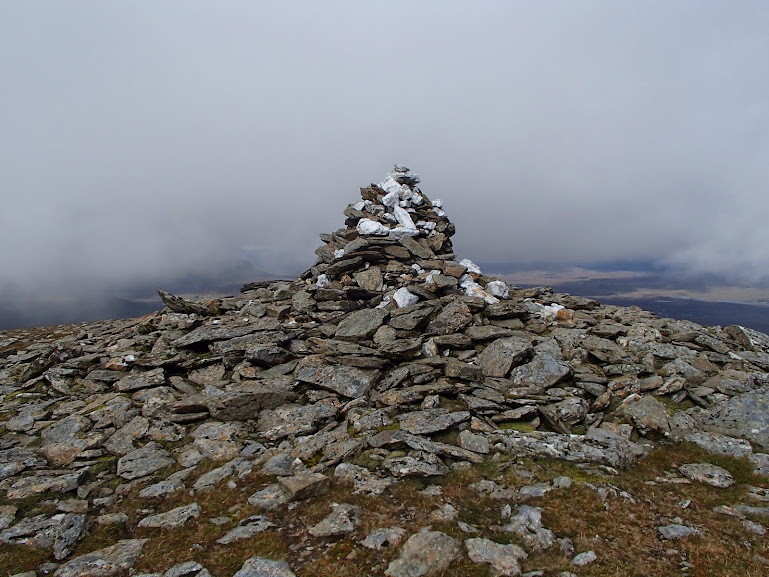 View of Loch Lyon from the summit of Beinn A'Chreachain ... 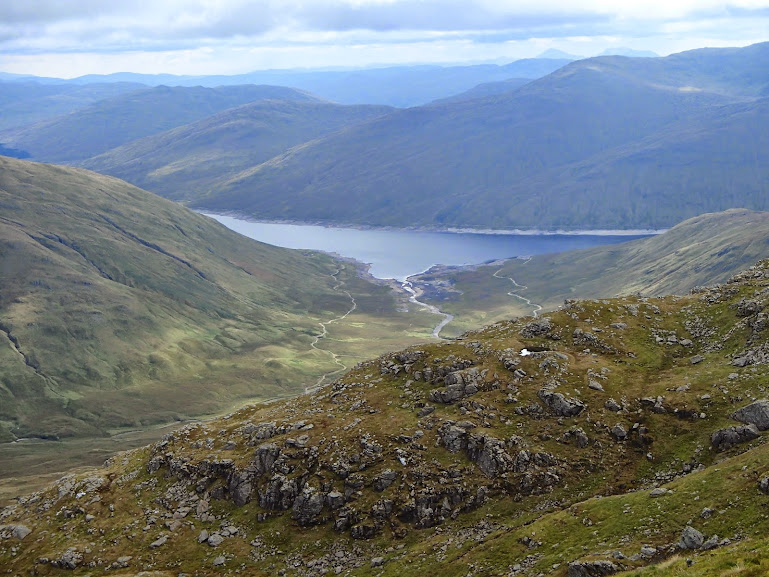 The start of the descent down the NE shoulder of Bein A'Chreachain ... 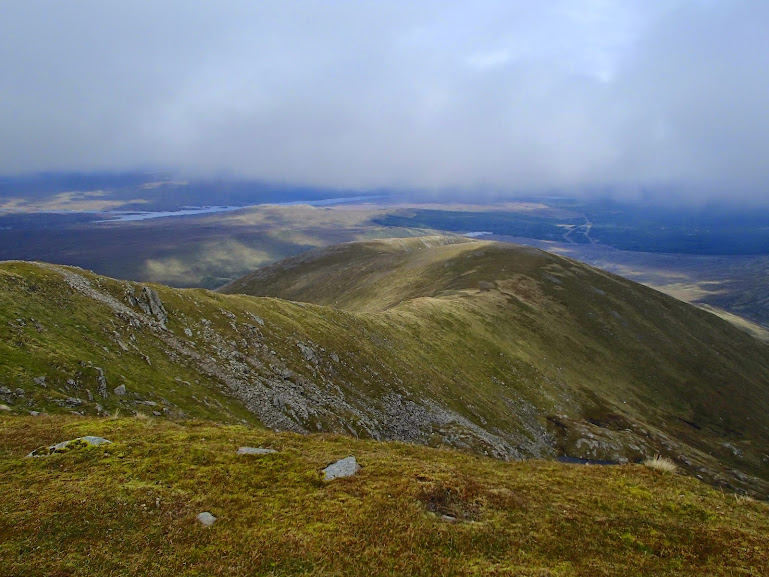 Lochan a'Chreachain from the descent into the Coire ... 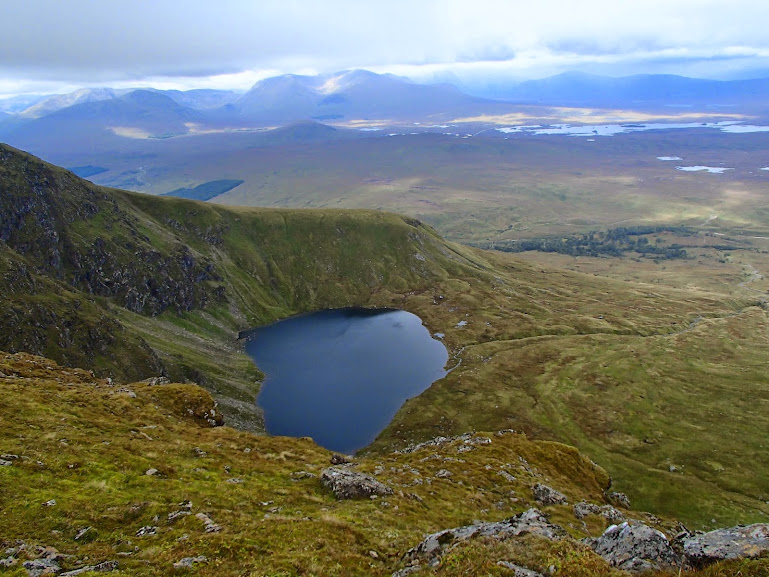 Stopping to refill the water bottles before going down to the long track back .. 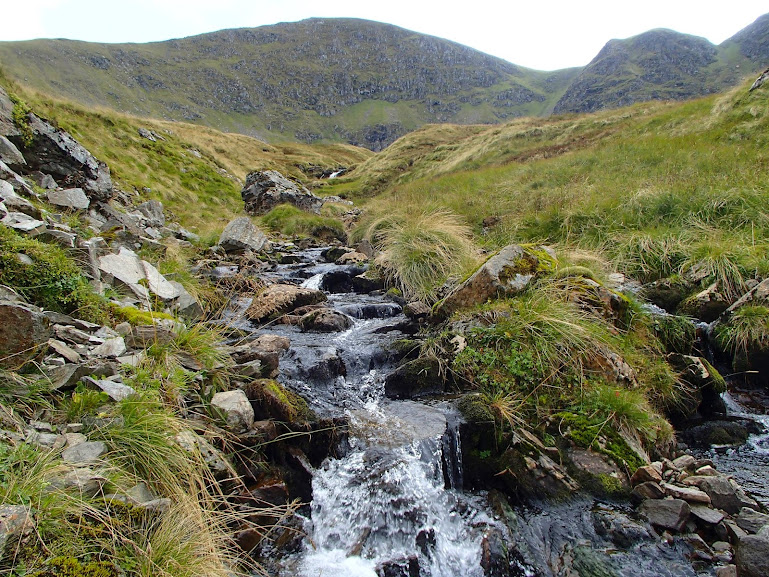 Ah that’s what these hills look like! I did them in thick mist. Very nice pictures!

Some great photo's that captured the walk

Nice one, SS. One good point about doing the route that way round is the sudden view that opens up when you reach the first bealach.

Karen, Jimmy and I also discovered the 'new' car park and used the signposted hill path. The WH route description, at the time of posting, does state, "Car park just off the A82..." which is a fair description of the current situation, but the route map and start map still show the old car park nearer to the farm.