If anyone had told me one year ago that I'd be a dog owner, I'd have laughed. If they then told me that, in 11 months time, I'd be hiking and camping with a dog in tow, I'd have laughed louder. Fast forward 11 months and lo, it was so (except it was the dog towing me

Caught in a weak moment, I'd relented, the women of the house got their wish and, having never had a dog, Ferris (Border Terrier) moved in at the beginning of last December. It's been a steep learning curve for me but, almost a year on, I reckoned it was time Ferris graduated from the Cockleroys, Cairnpapples, and Carn Llidis of the world to something a wee bit more substantial.

A window of opportunity presented itself this weekend when my other half and our youngest had a Guide camp. Watching the ever-changing weather forecast and looking for a high start or slightly lower summit, plans veered from Glenshee to the Lawers range and then West looked best so, not wishing to over-tax the wee man, I decided to head for Loch Achray and Ben Venue.

Set off from home at 1.30pm and, after a bit of pfaff (including an unsuccessful wander to find the alternative access to Ben A'an), we eventually left the car park, bound for Ben Venue, at 3pm.

All calm and clear over Loch Achray 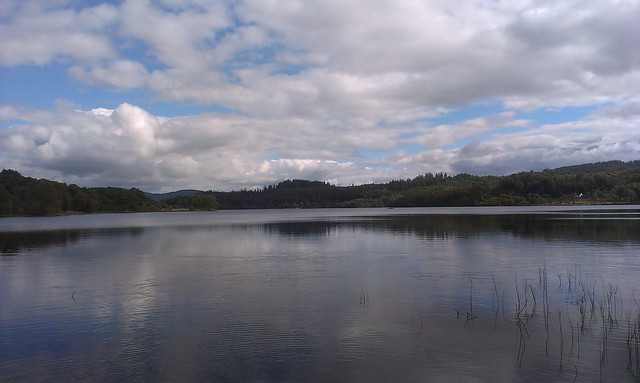 Following the WH route, no more than 10 minutes from the car, it started raining (both, the BBC and MWIS, failed to mention this

It's all going a bit Pete Tong?! 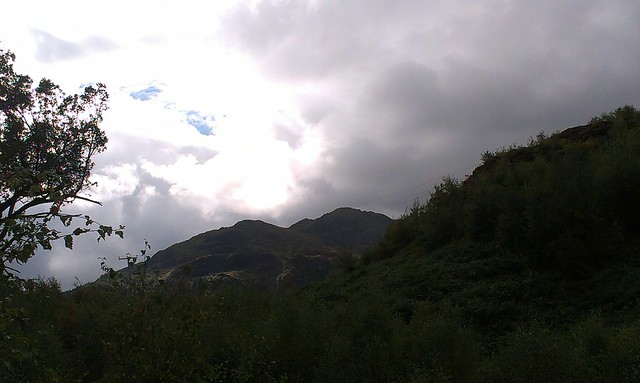 ...but, the trees provided sufficient shelter to avoid getting the jacket on and, by the time we'd cleared the woods, it had gone off again.

Rain clearing to the East over Lochs Achray and Venachar... 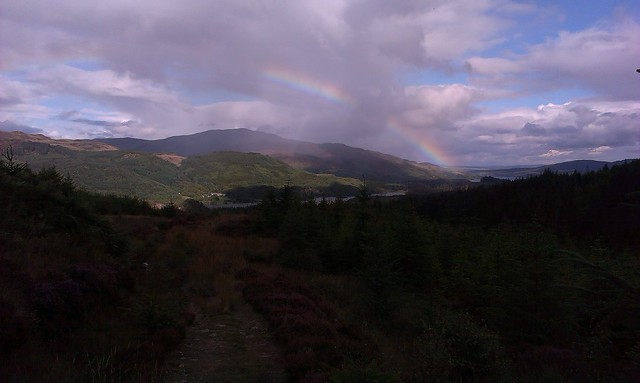 Kept the dog on the lead throughout as I wasn't sure what we might meet on route and there are some rocky drop-offs further up. We passed a couple of dozen people heading off the hill on our way up and, once out of the plantation, into the deforested area, I did wonder about the long way round and had a few glances up the SE flanks to see if there was a more direct route to the top. 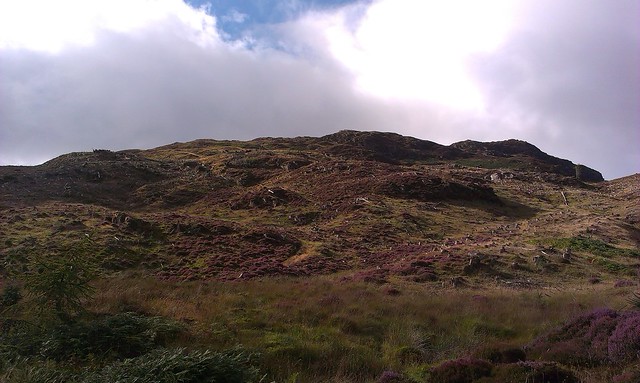 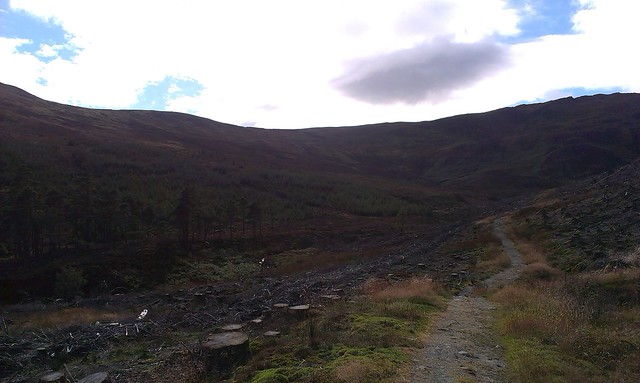 We stuck to the path and wasn't too long before we were through the fence and on to the steepish pull up to the bealach and the mahoosive cairn.

Some nice waterfalls on the way up... 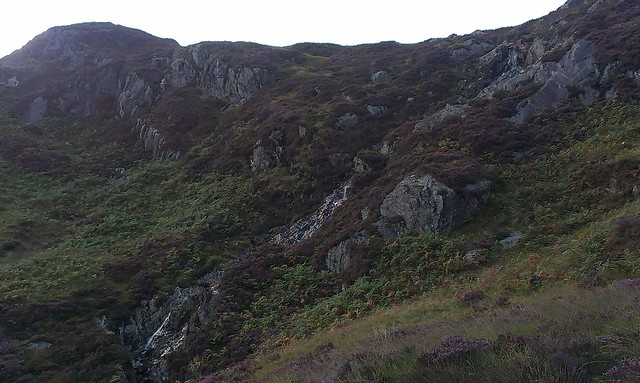 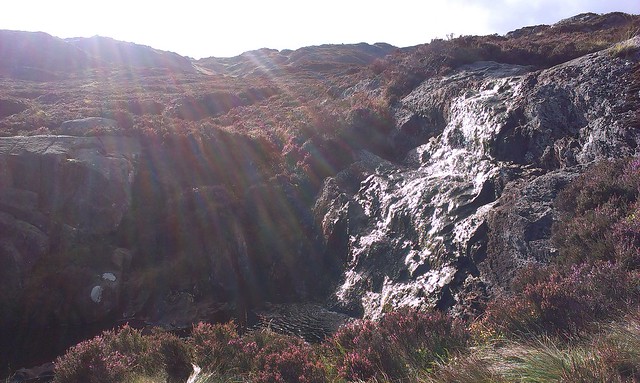 We hung a right here and on to the scrambly bit, experimenting with the length of the lead to help prevent either of us coming a cropper on the rocky approaches.

View to the NW from just above the bealach/cairn 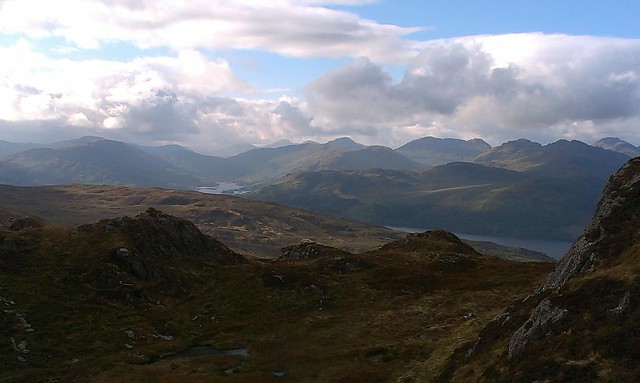 Headed for the true summit (NW) first of all and scoped-out potential campsites here before heading over to the SE top. 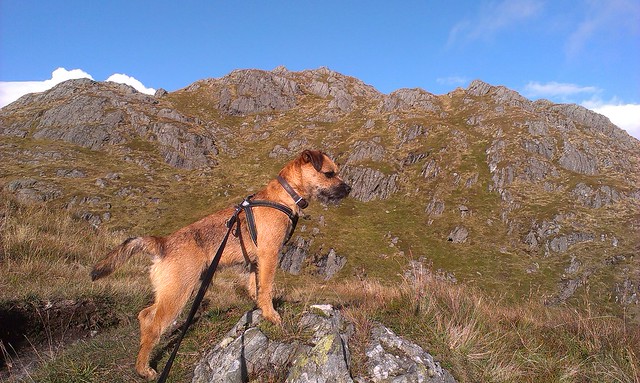 There were 5 or 6 people on the SE top but they headed off before we did and, based on sunset/rise potential, opted to return to the true summit. It was just after 5.30pm. 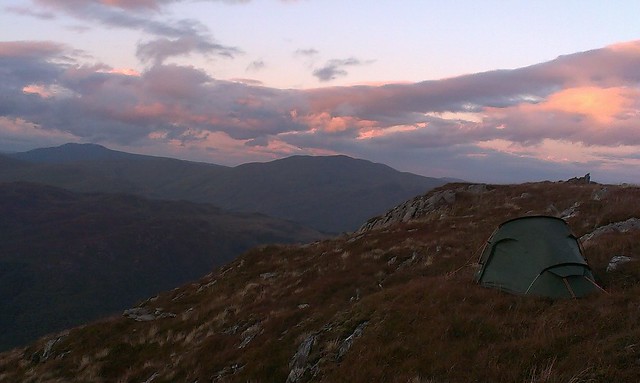 Electing to pitch just beneath the true summit (NE) with views over Lochs Katrine and Arklet, got the tent up in the stiff breeze, without it taking off down the hillside, and quickly on to the business of dinner. Tortellini and arrabiata for me and some lovely kibble and tinned food for the pooch! It was nearing 9pm, when we'd eaten, and the wind had turned cold so, after a quick brew, decided to turn-in, as it didn't look like there'd be much of a sunset. There was plenty of interesting light around though. 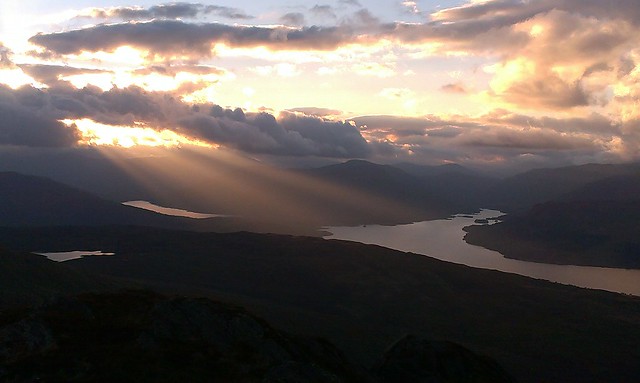 Not a bad outlook... 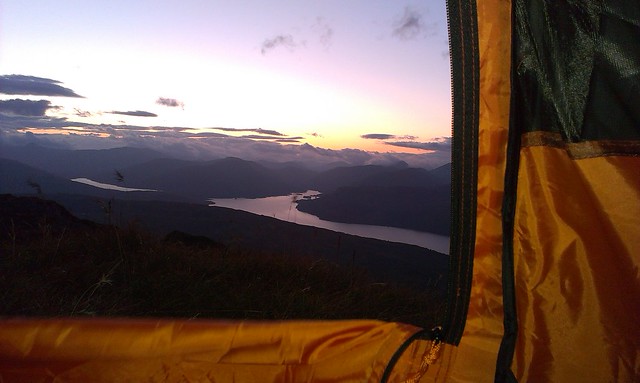 Zipped the tent up not long after 10pm and got into the bag. Ferris had other ideas though

and decided that every gust of wind hitting the tent under the full moon, was the beast of the moor trying to get in and either growled or barked, making sleep difficult. When he wasn't doing that, either trampling over my head and chest or his mild snore kept me awake. The wind did settle for a spell and I think some sleep was had between 1am and 4am. It was cool through the night, frost on the tent, and a stiff breeze greeted us in the morning so, cold to start but, clear enough and some decent views greeted us as the sun rose. 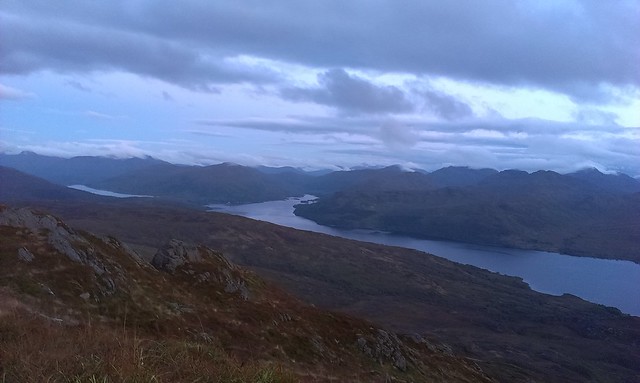 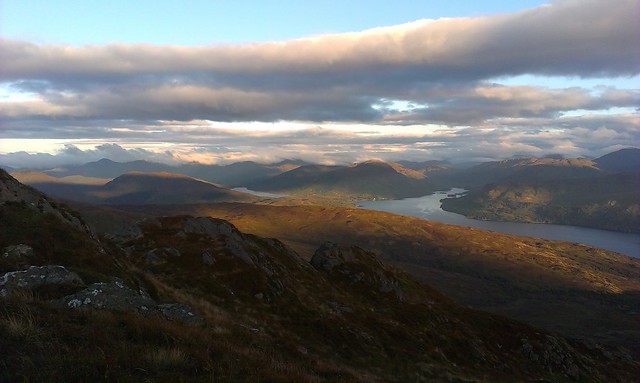 Had some cereal (and a tinned, all-day vegetarian breakfast I'd picked up in Morrison's in the morning) and more kibble for the pup, before striking camp (it was 8am). With yesterday's thoughts of an alternative return route fresh in the mind, headed back to the SW top and headed SE off here, with the plan to descend and rejoin the WH route well along the track. 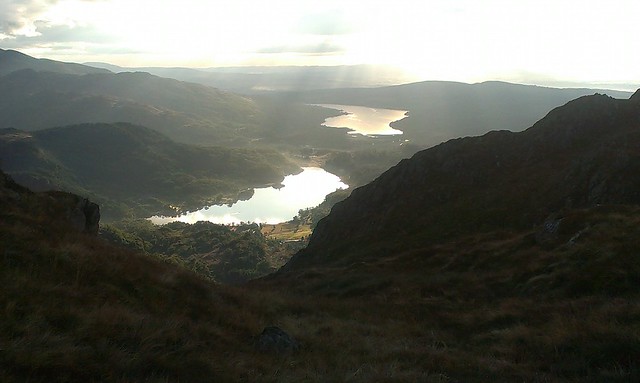 It's fairly rough ground but relatively dry at present and was able to pick a way down, zig-zagging the steeper sections, and realised on seeing a double fence, that might be the reason for no obvious route down. On reaching said fence, was pleased to the see the very section we'd aimed for on the first fence was open and the second, smaller fence was easy to negotiate (I went over, he went under). It was only 10-15 minutes through the deforested area until back to the track. I don't think this saved a massive amount of time overall, maybe 30-40 minutes, but it was good to reach the track and we only had 30 minutes or so from here to the car park.

The way down (zig-zag to the burn to the bottom left of the pic, through and over the fences and rejoining the track, this side of the young trees to the bottom right of the picture - I see from this now that I could have snaked through the plantation and rejoined the track even further along) 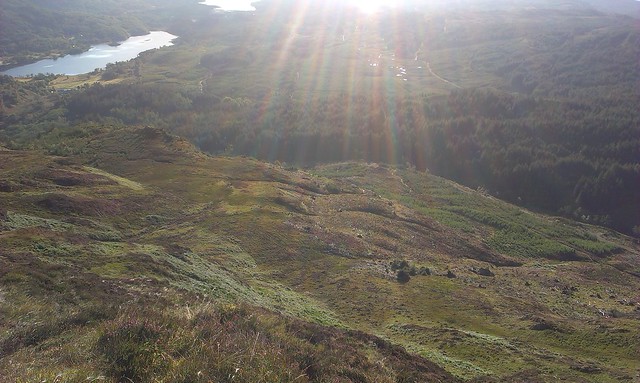 It was a peaceful return under clear blue skies, we passed no-one on the way down but, a couple of cars did arrive at the car park while we were sorting ourselves out before heading home, it was a little before 10am.

An enjoyable hike and overnight, the wee man acquitted himself well. Maybe squeeze another in, in a couple of weeks if the weather is kind. 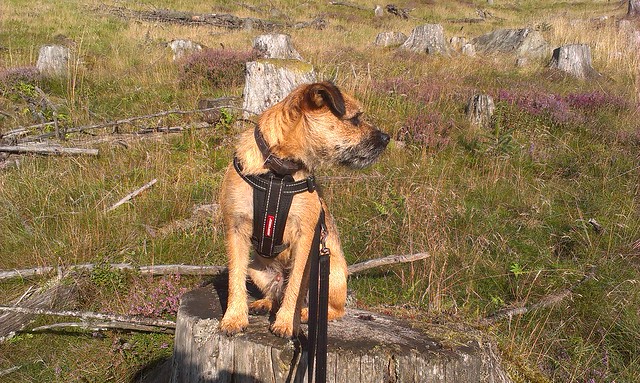 Well done Ferris. You need to have a think about your future celebratory summit photos.
That first early morning photo does look cold. Was it as cold as cul mor earlier on this year?

Well done Ferris and of course well done you for hiking and camping with a dog in tow!
I like the picture of the sunset, with the sun rays peeping below the cloud.

Avocetboy wrote:Well done Ferris. You need to have a think about your future celebratory summit photos.
That first early morning photo does look cold. Was it as cold as cul mor earlier on this year?

Colder, mate, by some way (so far as I can recall at least). Ach, always happy enough with a pic of the summit itself, I'd rather not be in them. What do you suggest, a handstand, drape myself over the cairn, get my pipes out...all three?!

Silverhill wrote:Well done Ferris and of course well done you for hiking and camping with a dog in tow!
I like the picture of the sunset, with the sun rays peeping below the cloud.

Cheers, Silverhill. Enjoyed your CMD report earlier today, must get around to that one of these years, looks fantastic. Nice one.

Great view from your tent !
Not a hill I'd normally think of for a camp but looked well worth it - and well done Ferris - cheers

rockhopper wrote:Great view from your tent !
Not a hill I'd normally think of for a camp but looked well worth it - and well done Ferris - cheers

Cheers, rockhopper. Ben Venue fitted the bill on the day for weather, not too far from home (left my eldest home alone with her pal...wanted to be close in case neighbours reported a raucous house party

) , not too strenuous for the pup and so on.

If wind had been lighter, slightly better vantage point just above where I pitched (elevated area seen in pic no.10 above the tent), wouldn't have been able to cook by the tent there on that particular evening though.

Bonnie dog and the best companions you can take on the hill but aye bark n growl is a tent thang my terrier is exactly the same.... does my head in

Collaciotach wrote:Bonnie dog and the best companions you can take on the hill but aye bark n growl is a tent thang my terrier is exactly the same.... does my head in

Was hoping he'd get used to it, Collaciotach. Maybe not, eh