Day 2 started with a beautiful clear sky, and after a wee while waiting on the sun drying the dew from the tent it was soon packed away and I was on my way down the coast to Quinag. This is another group of hills that I had seen years ago and just had to come back to see them a bit more intimately rather than just a drive by. Its not long from Scourie and you soon get your first glimpse of this stunning mountain (even more so In the morning light) Before long I was booted and ready to go and she looked just fine from the car park, and as it was already around 20C I thought I would remove the bottom part of my trousers, which was great but later I would live to regret Behind you on this walk is Glas Bheinn which if I have time I am going to climb tomorrow. Onwards following the obvious path for maybe 200mts and it takes a sharp left turn and that soon takes you to the obvious ridge which you follow to the top of the first summit of the day. its a bit slabby which could give problems in winter with ice, but overall its pretty easy. on the way up thus shoulder your eyes are drawn to your left and to Loch Assynt and the isolated hills of Suilven, Canisp, Stac polly, Cul Mor etc which were all looking just fantastic in the, still early light.

What a view- Loch Assynt and the views were just superb all around and you also get a fairly descent view of the rest of the days walk. Summit photo taken and it was off again, fairly cautiously down the ridge leading to the Bealach a` Chornaidh then up again to the 745mt point and onwards to Sail Gorm. It really is a fairly easy walk but with all the photo opportunities it took me fair while to get to the second summit Sail Gorm and the views when you get there are just superb. With a wee walk north you can get some better views and one in particular was a reminder to me just how long ago it was since I first thought of walking these hills, and that was the Kylesku Bridge Next was a simple matter of re tracing your steps back to just short of the 745mt top and take a slight left to by pass the summit and head towards Sail Gharbh which again is a fairly easy if slabby walk to the summit. 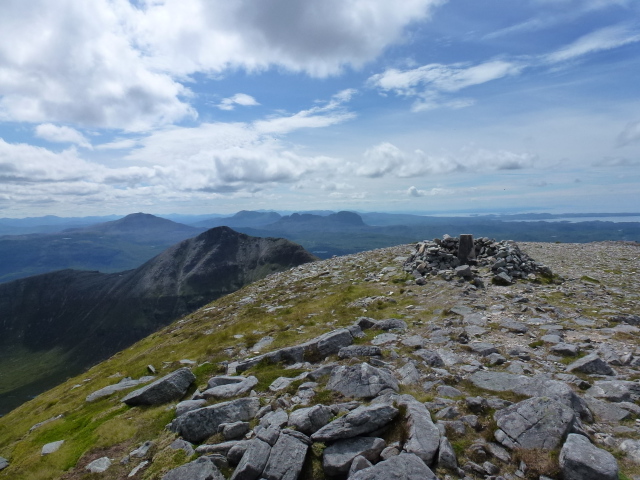 The walk out is easy enough if a bit of a slog, and as I got closer to the wee loch that feeds the Allt na Bradahn I was seriously thinking of a dunking as by this time the sweat was rolling and it was boiling hot, so hot even my jelly snakes were wilting

and in need of a drink. Soon I was back at the car absolutely pooped

the heat just drained me where normally I don't bother too much about it. After a change of top, I was on my way to Lochinver for a wee drive as I had heaps of time to use before bed time,

it was just then that I got a txt from one of the Rangers at my work bumming about sunning herself at Ullapool and how great it was, she said she was going to be there for the next couple of days so I suggested we meet up for a pint or 2 at the camp site as that was my plan anyway, plan made for later and I was away to be a tourist in Lochinver and to enjoy a very welcomed ice cream on the beach, before my onward journey to Ullapool and the promise of a fish supper and a couple of beers and maybe a dram or 2 I was soon at Ullapool with the tent up, it was time to get fed and watered and after a quick call caught up with Claire and her partner and arranged to meet later on the beach for a dram which I duly did, and it was just the best end to a superb day on the hills even if my legs were a bit raw with sunburn. Drams by the Beach fire :-)

Magic, despite all the great pics, the jelly snakes win!

Stunning part of Scotland superbly captured...... but my personal favourite is the beach fire and sunset.

Hey Dawn, the sun didn't only go to my head it also got my legs in a big way

that's why there is only one summit photo, I couldn't possibly subject walkhighlanders to any shots of my uncovered legs

And those Snakes are determined critters when they need to be

dogploddder, that also was one of my favourites, even more so with a Deanston Malt in my hand

Lovely day, great hills and a beach fire, what more can you wish for!

Wow, you picked the right days, I'll have to come with you, more great pics of one of my favourite areas

Awe man, that beach scene is awesome, great pic. I'd prob have a few too many drams and wake up with the tide lapping up against my coupon

That looks like a proper holiday. I particularly like the photo of the Kylesku bridge... will be up that way again in a week or so, I hope

The beach by the campsite in Ullapool is a great place to watch the sun set behind the Summer Isles whilst sipping a wee dram. Must post my photos from last May.

When I first went up that way, there was a ferry at Kylesku (shows how old I am

- though I was just a kid at the time). The bridge was there by the time I bagged Quinag, though, and I remember looking down at that view and remembering further back to the ferry.