I'd been looking forward to the past weekend for quite some time. Barring disaster I'd finally hit the ton, having spent most of the summer in the 90s, and as the days grew nearer, the forecast improved. It was looking good.

Until the morning of the walk itself

Car-shared with JenniferC and we met up with Graham, Mat and Mark at the Kings House Hotel, before a several mile drive past Loch Voil on a single track road with some rather precarious "passing" places. Finally reached the nice wee car park at Inverlochlarig. Here the decision was taken to do Beinn Tulaichean and Cruach Ardrain, as Jennifer and Mark had already done Stob Binnein and Ben More. The weather was a bit pish so I opted to don the sweltering waterproofs and leave the DSLR camera in the car, a decision i'd regret later on. Photos on this walk taken with my mobile

We set off past the farm, following the signs, over a stile and up the track into Inverlochlarig Glen. After a short while we decided to strike off up the steep grassy slopes, involving considerable tramping about wet ground, a near-fail climbing over a fence and lots of regret over playing football the night before. However, height was gained fairly quickly and the view back to Loch Voil was very atmospheric with wisps of cloud wreathed around the hills. A cat-and-mouse game of waterproofs-on-waterproofs-off continued for most of the ascent until I just couldn't bothered and kept the trousers on. After a couple of hours the summit was eventually reached, with fabulous views in absolutely no direction whatsoever

Still, it was a relief to get the 100 up and I borrowed a wee stone from the top as a memento. Interestingly, this left me with 182 to do, and it was Mark Spicer's 182nd munro, leaving him 100 to do. Some nice numerical symmetry there. After some welcome food at the summit, we headed for the second munro, Cruach Ardrain. This would normally be an absolutely simple wee walk, but I was feeling the effects of Friday night footy, little sleep and chronic unfitness, and was generally a pathetic wreck all weekend. Eventually the second summit was reached, again with no views. My enthusiasm didn't even stretch to taking a summit photo of a pile of stones in the mist. After hanging about for a while in the hope of improving weather, we made for the bealach and the descent route. On the way down, things cleared somewhat, and the views were terrific. Was starting to regret not having the good camera At the bealach itself Graham and Mat gave into the temptation of adding Ben More and Stob Binnein, the summits of which had started to clear, and headed off. I literally couldn't think of anything i wanted to do less at that moment. I was knackered. The three of us headed down the faint grassy trail which eventually met the vehicle track in the glen, leaving a short walk out of a mile or two back to the car park. This was a fine day out, with the mixed conditions really adding to the atmosphere of the surrounding hills. Graham and Mat were off the other two hills less than three hours later which was a great effort for a tough circuit.

We stayed in the By The Way Hostel in Tyndrum (of course the venue for the November meet). It's a cracking facility and i'm looking forward to getting back there.

Anyway, onto the second part of the report.


Eunaich_chochuill.gpx Open full screen  NB: Walkhighlands is not responsible for the accuracy of gpx files in users posts

We'd decided on these two for the Sunday as they weren't too far from the accommodation, should be a fairly quick day and no-one other than Graham had done them before. We were joined by Ian Watson for this one. The weather was a considerable improvement, lots of low-lying cloud, but spells of sunshine and hopes were high for a cloud inversion. The hardest part of the day's navigation was finding the car parking spot

Eventually found it just after a bridge over Allt Mhoille then took the Castles Estate track. This fine track takes a gentle ascent for a couple of kilometres before a cairn marking the steep climb up to Stob Maol is found. This was fairly punishing, a bit like a mini Bealach an Lapain. Eventually we emerged on the more forgiving Stob Maol and began the gentle ascent of the munro itself. The cloud lifted intermittently giving some absolutely stunning views. Back towards Stob Maol 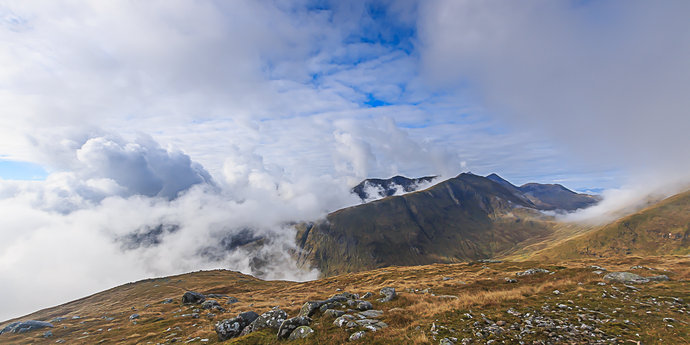 Towards the Cruachan Range

The slow plod to the summit continued. I was feeling pretty cack and only the views and the thoughts of a mexicana cheese piece at the summit kept me going. I eventually arrived to discover JenniferC teaching Graham yoga Not something you see every day Sun through the cloud

After a good long summit break, we headed for the bealach. There's a fair drop and re-ascent in terms of numbers here, but the terrain smoothes it out somewhat. The initial ascent is steep, but then levels out into a broad ridge walk with some fabulous views. After the final mini-push i reached the summit, to discover continuing yoga lessons and some terrific views. After a quick break and a chat to a couple of other walkers, we retraced our steps to the 896m point and the cairn marking the descent route. There's a trail most of the way down. It's steep and grassy in places, and boggy lower down, but not too much of a trial (unless you follow the wrong track further down

) and eventually the bridge on the main track was reached. The walkout from there isn't too bad and we were back at the cars by about 3:15pm. Final Look Back at the Day's Walk

Re: Ton-up Weekend in Tyndrum