Really just a Saturday afternoon stroll with the dog this one!

Lucy was distinctly whiffy and in need of a bath, so rather than the usual options, I suggested we head for Loch Glow. Having grown up in Dunfermline, I knew that nearby Loch Fitty was a popular angling location, but I didn't realise that Loch Glow was equally popular for the same reason.

We headed down the M90 and parked at the end of the track heading to Loch Glow from the back road to Cleish. As we approached the Loch, we could tell that there were a lot of people around from the number of cars and even a coach in the parking area. I wondered if the coach was a downmarket version of the Lochs and Glens tour coaches you regularly see on the roads of Scotland!

It was quickly dawning on me however, that the place was going to be crawling with anglers, and right enough, the edge of the water was lined with them.....not to mention their paraphenalia and no shortage of empty Carlsberg and Stella Artois cans. Oh well, if the fish aren't biting, what can you do to pass the time!

I have to say that some of them were distinctly shifty looking but I enjoyed some crack with some of them (discussing the catch - or lack of it - and the football results blaring out of transistor radios). Debbie even remarked something about me reverting back to some kind of foreign sounding Fifer accent which too many years spent in Edinburgh and Perth and her best efforts have tended to smooth over!

Anyway, we eventually got beyond all the fishermen and Lucy had her opportunity to get off the lead and take a bath in the Loch, before we headed along the dry stane dyke leading from the head of the loch to the Black Loch and then up the short climb onto Dumglow. Although a little hazy for the camera to pick out in much detail, the views were pretty decent across the Forth Valley, the Firth of Forth and north east over Loch Leven and Kinross.

To return, we more or less retraced our steps back down to the head of the loch and back past the now even more inebriated anglers. 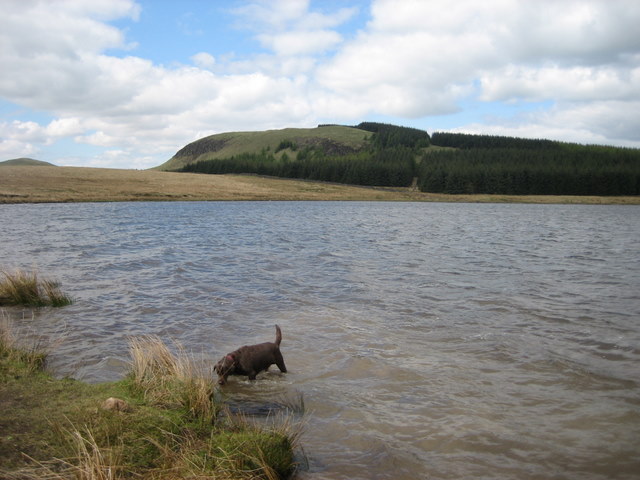 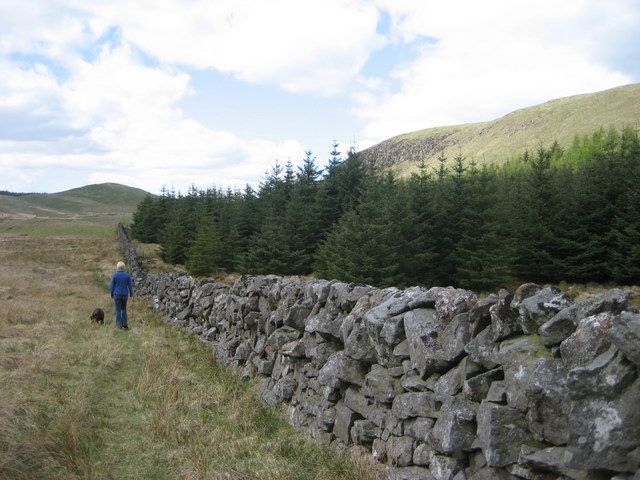 Heading for the Black Loch 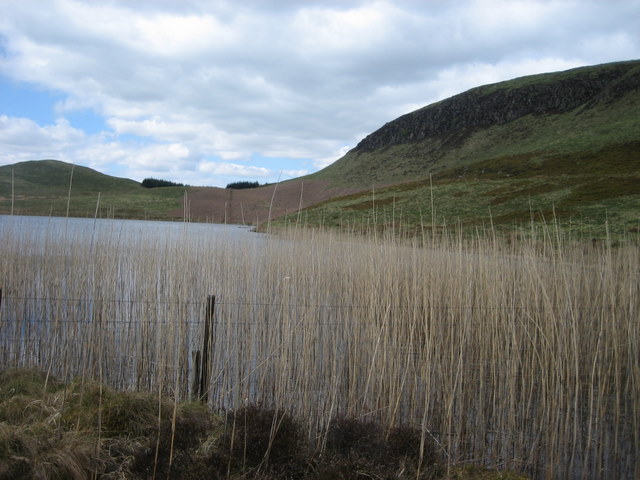 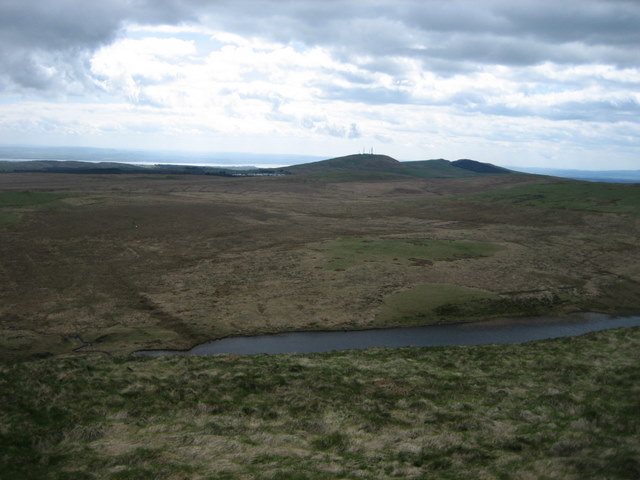 Knock Hill - Black Loch in front, the Forth behind 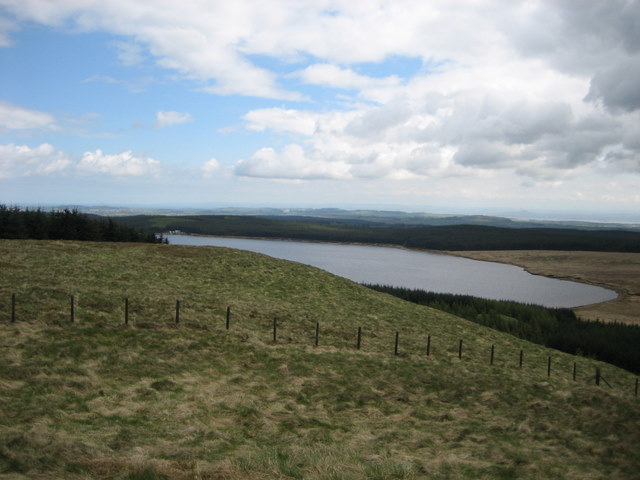 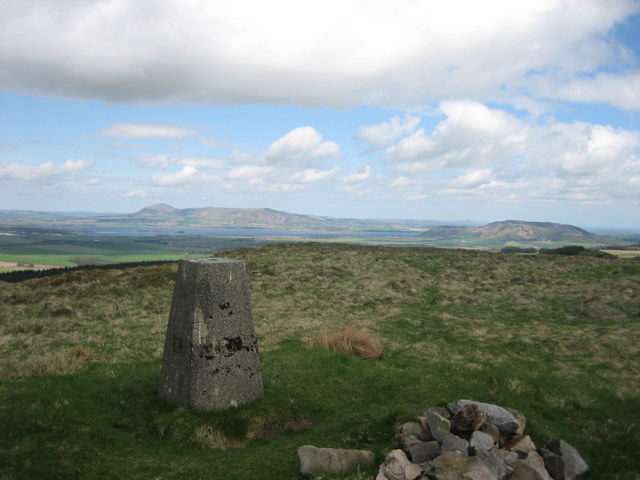 Loch Leven and the Lomond Hills from Dumglow 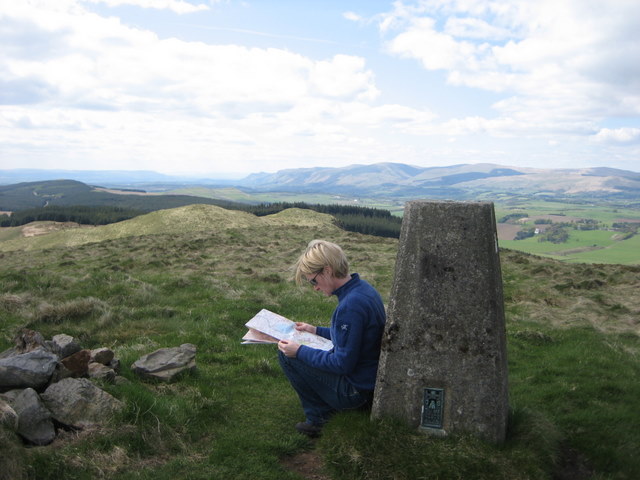 I did this walk today setting off from the layby on the access road. The loch was as still as it could possibly be and the weather was calm and dry. But, for any future walkers may I suggest that the route up Dumglow be followed by the north bank of the Loch. It was so muddy and awful on the south bank not a pleasant walk at all to the forest. But on the return the north bank of the loch was easy going as well as a wee bit shorter. There is a footbridge over the weir that can not be seen from the route to the south of the loch but is in good order and assists in the path to the forest.
There is some litter all round the loch but no more than is on any other walk or road side layby.
Oh, by the way the views are extensive from the trig point!

I remember this walk as having unusual litter on it

A pair of pants left on a rock

I just logged on and saw a TR entitled "Loch Glow and Dumglow". Wow, I thought. You don't see many of those on here. In fact, I don't recall seeing even the merest mention of this one in dispatches since my report on it from over two and a half years ........ Wait a minute! It is my aforementioned report. One and the same! Well, I admit I do sometimes spend an idle moment or two on this site revisiting one or other of my old reports that I haven't looked at in a while, but I really don't recall looking back at this one at all. Ever. That certainly gave me a nice little unexpected wander down memory lane. As for the pants left on the rock, well I did say that some of those anglers looked a little shifty!

no anglers when I did this at the weekend, the south shore is a bit tiresome underfoot so may return with the dogs and try the north shore. An alternate descent is eastwards through the trees (basically along the firebreak on the map) which is less traumatic than you might think and then up and over the highest of the Inneans and Dummilarline hill fort to the road and back to the car