Rough Bounds of Knoydart from Sron a Choire Ghairbh

A select group of the Old Geezers (Raymond, Sandy, Colin and Dave) convened at Invergarry Lodge on Friday evening, in fact we had it to ourselves. After a meal at the Invergarry Hotel it was back to the hostel and early to bed in preparation for a start at first light. We were very conscious of the short daylight hours and had a wish to avoid a headtorch lit exit.
So, we were up and away before dawn for the short drive to the road end on the west side of Loch Lochy. The light was improving and mist dissipating as we started walking at 7.45am. 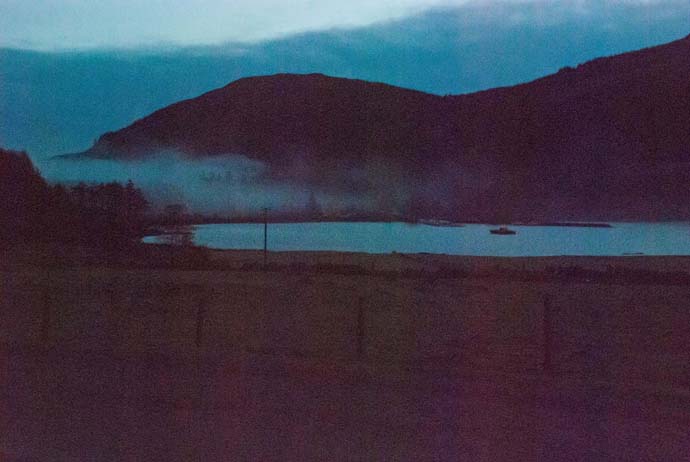 View from the parking area at first light

The first stage was a 4.5km brisk walk along a forest track just above the loch side as we watched the last wraiths of mist cling to the strip of forest across the loch. The easy walking ended at 8.30am when we left the track to take a steep footpath up through the forest and out onto a more gentle climb up the open glen to the bealach. This path was in remarkably good condition considering these are accessible munros and given the recent prolonged heavy rains. Our approach was observed by a herd of red deer up ahead, who gradually moved off beyond the hill paths as we gained the bealach between the two munros (9.45am). A great spot for our first break and a chance to preview the paths up both munros as well as, glimpses of far off hills and back down to the loch. A section of the path high up Meall na Teanga could be seen above the shoulder of the hill in front of us and seemed very distant, steep and exposed. However as we rounded the shoulder and saw the route ahead it turned out to be easier than imagined. First a boggy section across to the final climb and then a relatively easy path snaking up to the summit ridge. There was a fine level section as we walked out to the summit cairn (917m) where we could admire the expanding view of Grey Corries, Ben Nevis, Loch Lhinne, Morven, Lochaber, Rough Bounds of Knoydart, and Glen Sheil, whilst behind the Great Glen pulled away to the north east. The air was clear and the visibility amazing - what a panorama. And, thanks to our early start it was only 10.45am when we got to the cairn. Having taken our fill of the view , we retraced our steps to the bealach (11.45am) where we saw the first of the late starters, a jolly chap who couldn't decide which hill to do first. The steep incline from the bealach to Sron a Choire Ghairbh begins with a zigzagging stalkers path which takes all the pain out of the climb and it only took about half an hour to arrive at the summit cairn (935m at 12.20pm). This view, whilst similar to that from the previous summit also included a view along Loch Quoich and a direct line right up a mist covered Loch Ness. The usual game of identify the munros was progressing smoothly until we tried to say which of the pointy peaks to the west was Sgurr na Ciche (likely to be a highlight of next year's programme). We took a reading on the most likely candidate which was subsequently proved to be correct.

Both summits had provided a cooling breeze so we retreated back down a bit for lunch and to decide on our options for completing the day. Since it was only 1pm when we finished lunch we knew that given the good conditions we had over three hours of good light left. This made up our minds to return by the 'scenic route' - a good 6 km along the NE ridge to the Kilfinnan Falls just above our starting point. As we started, this choice was soon validated when we realised that if we had returned by our access route we would have immediately been out of the direct sunshine for the remainder of the walk. As it was, the first section was a delightful walk along a level narrow ridge whose shadow we could clearly see on the adjacent slopes across the glen. This gave rise to a discussion about why we couldn't see our own shadows progressing along the upper edge of the shadow. Pulling on our Higher Physics reserves of 40+ years ago we realised it was probably about the refraction, no, the diffraction of light. Sandy gets an A for pretty much giving the explanation.
The next section passing over the little top of Sean Mheall, was a rougher rockier, tussockyier, boggyier descent picking a route down to a lochan sitting at the start of another level section high above and parallel to Loch Lochy. The lochan was like a mirror giving clear reflections of the rocks and grasses around the edge. From this vantage point, on the wall of the Great Glen there were views down on Laggan Bridge, the canal and Loch Lochy (and it is quite a lochy loch). Even more dramatic was the perspective all the way down the great glen out to Loch Lhinne with the late afternoon sun reflecting from the sea. I suggested waiting for sunset to get even better photos but nobody seemed keen to descend in the dark.
The final section was quite demanding being a steep descent picking our way down steep, pathless, broken ground to Kilfinnan Burn. We realised it was going to take another big effort, more importantly loads more time, in fading light to actually visit the waterfalls so we gave up this objective and completed the descent along the upper edge of the birch woods that cover both of the steep banks of the burn. We regained the track of our outward route just by the bridge over the Kilfinnan Burn across which we immediately came to our car (4pm). We all agreed that this three hour descent along the ridge had provided a suitably enjoyable conclusion to the walk and turned a great day into a QMD (Quality Mountain Day).

But that's not all. This early finish meant we were back, showered and settled down in time for the start of the Scotland - All Blacks rugby test on the telly. An exciting game ending in another glorious defeat for Scotland. Then it was back to the Invergarry Hotel for a couple of pints, fish and chips and reflections on a wonderful day.
One concluding discussion was about how surely all this good exercise and fresh air must be good for keeping the ravages of ageing at bay. I was able to report that I had recently read about 4 activities associated with the delayed onset of dementia - dancing, chess, playing a musical instrument and one I couldn't remember at the time! It was reading! Great stuff. I would have stayed for the sunset though. Possibly.

Wonderful, that looks like a great day out with old friends!

Well done lads, 'Old Geezers' look like your all as fit as a fiddle to me. I bet you guys could tell some great stories of the hills

Looks a grand day out. I only hope i'm still out walking the hills when i'm an old geezer

I'm seriously impressed - the Loch Lochy Munros AND the rugby ... sounds like a lot of excitement for one day

Thanks for all the comments guys.

Huff_n_Puff, when Laidlaw was about to take the kick that would have put Scotland in the lead it was just about too much excitement

That looks like a great descent! Wish I had thought of it and done the hills your way round. I got pretty fed up walking back along the path by the loch, let me tell you! Great day out by the sounds of it.