A starter, main Meall Ghaordaidh and a dessert.

A starter, main Meall Ghaordaidh and a dessert.


Better late than never with the report!!

After an extremely wet and borderline miserable slog up Cruach Ardrain a couple of weeks ago, the hillwalking gods rewarded me with a stunning day out in Glen Lyon. I have seen this munro described by some as fairly unremarkable, but I think it always down to the weather and the day itself as to how memorable a walk can be.

Leaving Glasgow at about 7.30am, my Dad and I drive up to Killin for some breakfast, before heading over the Lawers road to Stronuich Reservoir. The sun was shining and the snowy tops of the Lawers range and Tarmachan ridge were out on show under bright blue skies. Once we were over and into Glen Lyon, the fog was hanging deep in the valley and as the road dipped and dived we were greeted with out starter for day. The views west along Glen Lyon were stunning and I could see my target for the day, Meall Ghaordaidh.
I started walking around 10ish, leaving my dad to drive off up the glen on a photography excursion (he got photo of the day in the Herald on the following week - with a thank you letter from Tom Weirs wife to boot). Other than bumping into Cameron McNeish this has to be the rock n roll height for any keen hillwalker!! 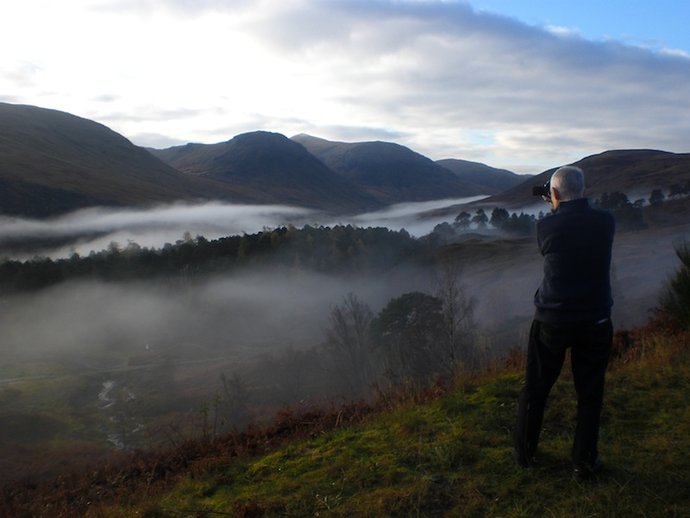 The making of photo of the day! The hills have shadows

At the reservoir, you cross the bridge and a track wheels off to the left until you reach a small dam. From here I crossed the fence and started up the path following Allt Laogahin. There is a track to start with which quickly disappears as you lift up and out of Glen Lyon. The rains of recent weeks meant the burn was in full force with some beautiful waterfalls stumbling over the rocks. 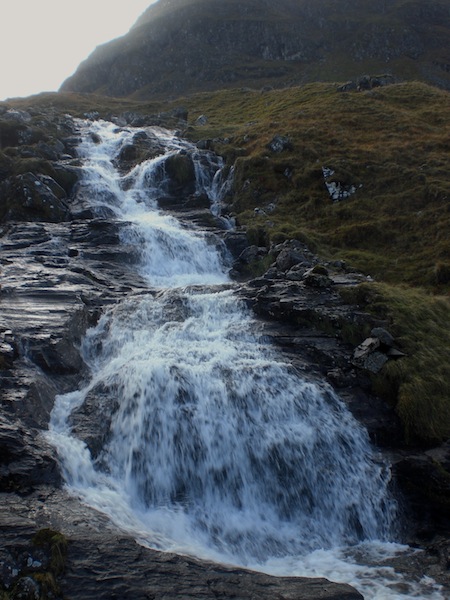 The path from this side of the munro comes and goes, but I had a lot of fun crossing the burn at several stages before hugging the crags at Creag Laoghain. You could just as easily stay next to Allt Laoghain but I took a route through the boulders strewn under the cliffs. Underfoot was not nearly as boggy as I was expecting and for the main part was quite easy going. After a couple of stops for drinks and photos, I followed the curve of the land to the right, climbing up and onto the grassy ridge below todays munro. The views as I climbed in the sun started to open up and the tops of the Lawers group would come and go throughout the day and it was stunning to look at. 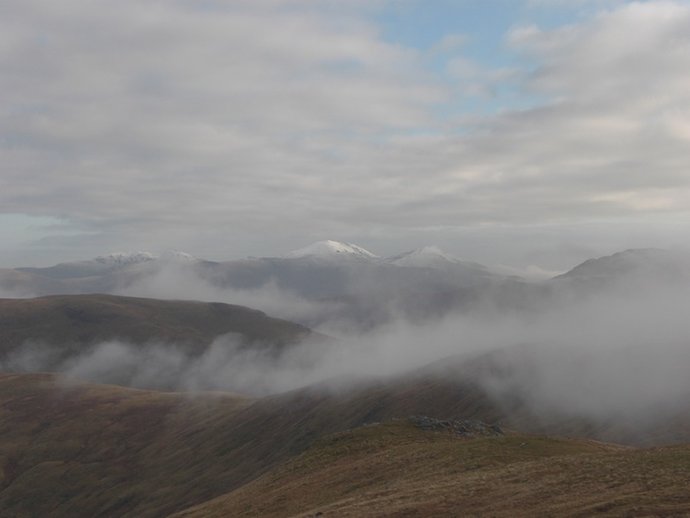 As I pulled up to the summit there was a light covering of snow, and the sun began to shine through the clouds. At this point I thought I was going to see some cloud inversion for the first time and I wasn't to be disappointed. I made the top in about two hours at a relaxed pace. Reaching the top on my own with no-one around, I came across some of the most fantastic views I've ever seen up a mountain. To the south the clouds covered Glen Lochay, Ben More and Stob Binnien were poking above the clouds. To the west I was high above the clouds and views of Beinn Heasgarnich and Glen Lyon drifted in and out. The sun was shining and there was absolutely no wind, so I stopped for about half an hour soaking up the silence and the views. A group of lads celebrating one of their birthdays joined me from the Lochay side, offering a spare birthday cupcake which I wolfed down with a cup of coffee. Thank you very much! This was one of those 'I could stay up here for hours' moments. With the lack of wind, and glorious 360degree views I felt vindicated for going out on the soaking Cruach Ardrain hike the previous week! 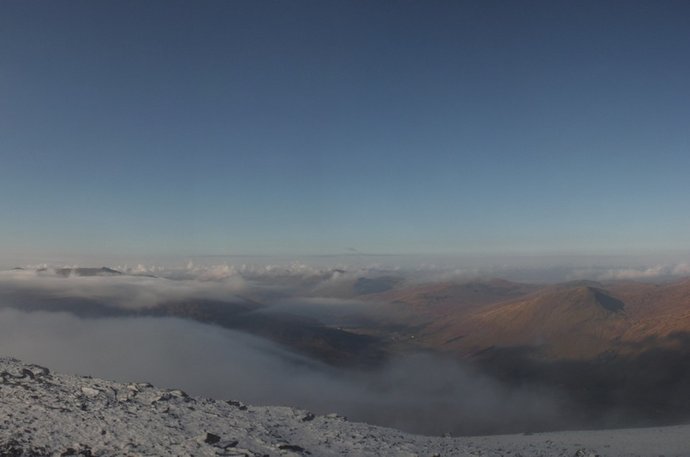 As with all summits, you have to come down at some point, I grabbed some pictures looking north to Stuchd an Lochain and Meall Buidhe and started to descend...but not before getting a glimpse of my first broken spectre!! I could not keep the smile from my face as I rambled down the hillside the way I came. At this point the clouds closed in quickly and it immediately felt darker, and a bit more inhospitable. A reminder of how things can change in our fair country. Who turned out the lights? I picked up the top of the Allt Laoghin and meandered off down the hill back to the reservoir, almost the same way I came up. I had loads of fun taking loads of pictures of Laoghin and the waterfalls, stopping every 200m or so to take different angles of the same picture. I made it back down to the reservoir just before 2pm, where after some great timing, my dad had just arrived with the car. As we prepared to set off for some coffee and cake somewhere, we turned the ignition only for the car not to start!! There had been very few cars all day in the Glen, but lady luck continued to be on our side as a car pulled up after 5minutes. Fortunately this lovely family had recently moved to the area from the highlands and were more than happy to help out, having been in fixes like this before. I jumped in the car with them to head a few miles east to the private estate and call the AA. Trying to describe where we were to the lass on the phone was pretty difficult. 'You're where..?' After relaying the instructions, our good Samaritans drove me back to the car, where we started a two hour wait...until...we turned the ignition and the car started!! You have to laugh or you'll cry sometimes!!
We drove back to the estate and cancelled the recovery truck, but our delay meant we'd rather just head straight home, no coffee and cake! We drove the length of Glen Lyon as the light was beginning to fade, and were rewarded with a glowing sunset. Had the car started we would have missed this. Our dessert for the day. 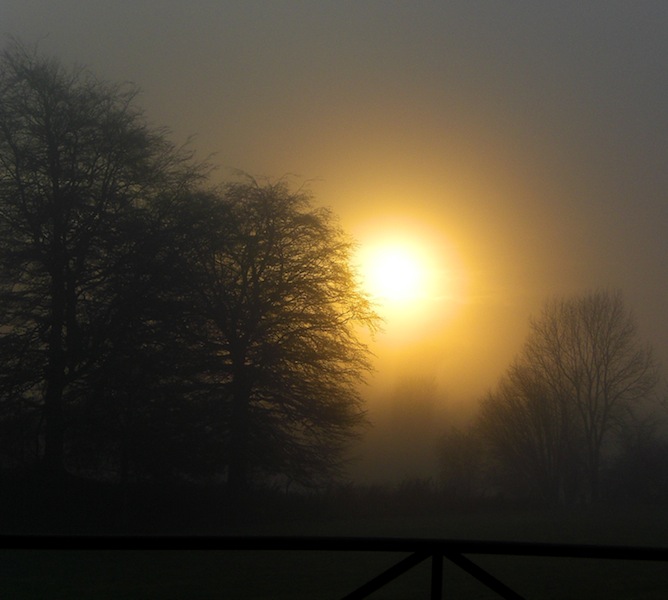 Eventually we made it back to the A9 and the long drive back to Glasgow, it had been a bit of a longer day than planned. However I have to say it was one of the best days out, full of stories to regale at a later date.

I would say this, if someone tells you it'll be boring or just a box to be ticked, don't listen, make your own day. After a full three courses we were stuffed and I slept like a log happy with the days wanderings!! A huge thank you to folks in the car if you read this, and to the boys for their hospitality at the top. Glen Lyon you beautiful beast you, I'll be back!!

A very eventful day and a cracking report

thanks for sharing.
Ghaordaidh was my first munro of 2014 and a cracking walk. Another hill with a bad rep and very under rated, but a cracker.

Congratulations to your dad and thanks for a good read

Thanks very much folks, glad you enjoyed - its all down to the cards your dealt sometimes