Clough Head to Hart Side

Clough Head to Hart Side


No epic journeys were had in the making of this adventure, unless you count them booking eight carriages worth of reservations onto a four carriage train, or arriving in Keswick (where I've never been) just before the start of a power cut and having to find the youth hostel in the dark. This may be why it got a bit adventurous later on.

Keswick obviously has a beautiful setting among the hills, but it was difficult to find anywhere where you could see much of them. After a trip into town I set off for the hills, back out past the hostel, along beside the river, briefly meeting the main road, and then along a street which became a proper country road with good views of the northern fells, leading up to the Castlerigg stone circle. 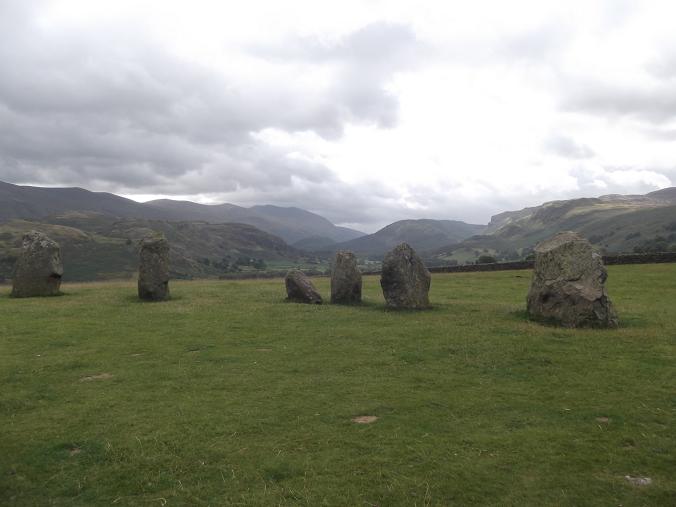 The stones had a wonderful setting, in a flat place with the hills rising up on every side - you could see why it might have been an important place, even if it wasn't now.

From there the way took me down little farm roads, with a pause to watch a man who seemed to be training his sheepdog rather than herding his sheep. From the road to Thirlmere I turned onto the Old Coach Road, but off it again quite quickly - too quickly, possibly. As far as I can tell, I turned off into Wanthwaite rather than after it, and in skirting it went too far along the old track (or old railway line?) and up by the wrong set of trees, ending up inside the maze of fields instead of above them. I found a way out, and over the top wall where it was patched with fence, but I never quite seemed to get sorted out from then. Inside the field walls

I knew the path should follow the wall before leaving it at the highest point, but there wasn't much of one anywhere, and enough scree just above the wall that I had to stick to it quite closely for a while. I did find a vague path going forwards across the stones, but since I really wanted to be upwards I took the pathless sheep's route straight up a grassy streak, and found myself on a much clearer path which I would probably have found earlier if I'd come the right way. This led on until I found myself at the foot of a grassy rake between two lines of stones - I couldn't see a rowan tree anywhere, but further on the path only led closely round the base of more crags, so it had to be the right place. The path to the rake

There wasn't one obvious path up the rake, but there also wasn't one easiest line - there were various traces of path on different options, and I could choose my own. It was very steep, as promised, but it was the kind of soft grass and moss that you can't slide off, and I just went up mostly on all fours.

I was being funneled to the right, and for a while the line up the stones on that side seemed easier, but then I found myself precariously perched on stones that were too loose to climb on from - fortunately after a minute I managed to just slide back to solid ground and take to the grass again. Towards the top the grass started running out and I was channelled onto the stones at the edge again, and this time I ended up genuinely stranded, unable to go up or down and with a very steep slope below.

After a long horrible moment of trying to shift my weight and only ending up sending loose earth running off, I managed to scramble out onto the rough grassy slope to the right of the rake - writing about it brings back vividly that I put my right hand down on a nettle as I climbed, but I didn't notice at the time until I was back on solid ground.

My legs were shaking badly, and I sat down at the first chance I got to recover a bit. It was only at this point that I discovered that I had almost joined a path which cut across the top of the rake and wiggled down the other side keeping close to the crags - presumably this was what I should have found by the rowan tree! 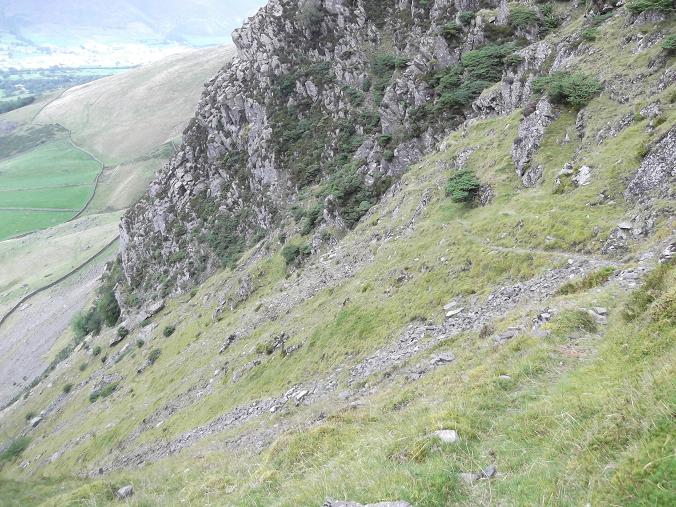 Still, from there I could go back to walking again, and I followed the path towards Sandbed Gill until I realised I was supposed to leave it at some point to cut up to Jim's Fold - there was a faint path leading that way anyway. It took me so long to find the fold that I thought I'd missed it, but I came across it eventually. 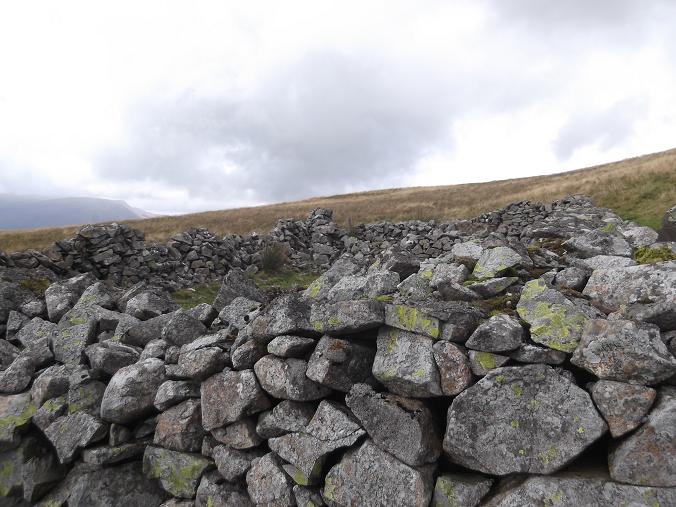 From there the summit was still quite a way away over a long shallow smooth slope - I made my way over the rough grass until I found the main path coming up. Even from there it was a long weary walk - I was reduced to counting steps, which is a definite last resort on easy ground, although useful if I'm struggling up or down. I was quite prepared for it to turn out to be 4 o' clock, or possibly next year, as I seemed to have been climbing endlessly without regard to time, but in fact it was about 2:30, and more than time for lunch. The summit had the smallest windshelter I'd ever seen, about as high as my knees, and although it did keep off about half the wind if I sat down, I decided that hiding behind the trig point was more effective.

Despite the cold wind, it was a nice summit, with good views all round. Great Dodd looked a long way away and a long way up, especially when I had to start off by going down. But it was a nice clear path leading to down to Calfhow Pike, which was a nice little summit. From the north it looked as if you had to climb up it, but by going past it I discovered that you could just walk up from the other side. From there it was steadily up to Great Dodd, which had a long flat summit with a cairn at one end and a shelter at the other, and the start of a view ahead to Helvellyn. 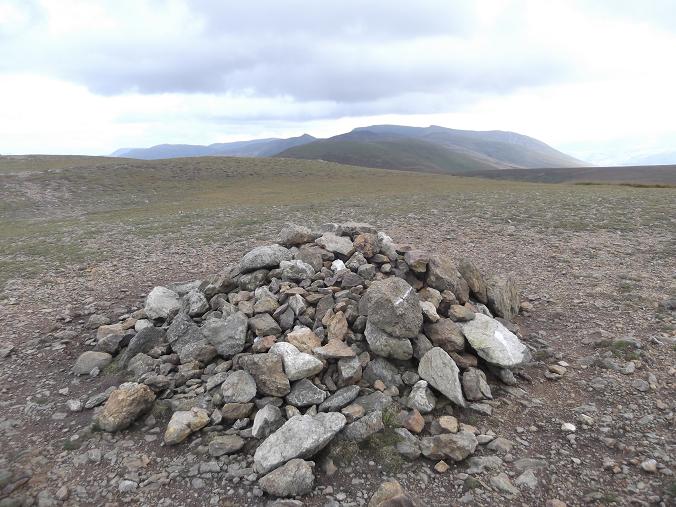 Watson's Dodd took almost no work at all in comparison, just a walk along the nice bendy ridge to a summit with good views to the north and west again. The path to the cairn still doesn't join up with the main path along the ridge - heading south you just suddenly find yourself walking parallel to the path you want. Stybarrow Dodd was another haul uphill and a slightly confusing summit - I'd followed the path right past it before I realised that there was higher ground behind me (and the picture makes the south top look taller, which it wasn't). Once found, it was a bare flat summit with the remains of an old wall, and the start of the ridge running down to Green Side - but I had another objective first. The path to Raise

I'd missed out Raise when I climbed Helvellyn and Hart Side earlier in the summer, so still needed to tag it on to this trip. From Sticks Pass it looked to be impossibly far away and high up, and I almost despaired, but it turned out be one of my favourite parts of the day, up a good path (except where mountain bikes had torn it to bits) to a nice rocky summit with a tall cairn like a beehive and good views over Ullswater. The clouds were doing their 3000ft trick again, just touching the summit of Helvellyn, and I felt like I should be able to reach up and touch them myself. From there it was a quick descent back to the top of the Sticks Pass - I was starting to feel like I could walk forever - and on towards Green Side. I have no idea who would have made a path from the top of the pass to Green Side - you'd have to be quite determinedly odd, or all mixed up like me, to bag it from anywhere expect Stybarrow Dodd - but I was glad they had - just a tiny line through the grass, but it made things much easier.

Green Side is a bonus Hewitt that's not a Wainwright - the first since Rough Crag on High Street - and has a collection of cairns all apparently much the same height - I tried them all out and took my pick. 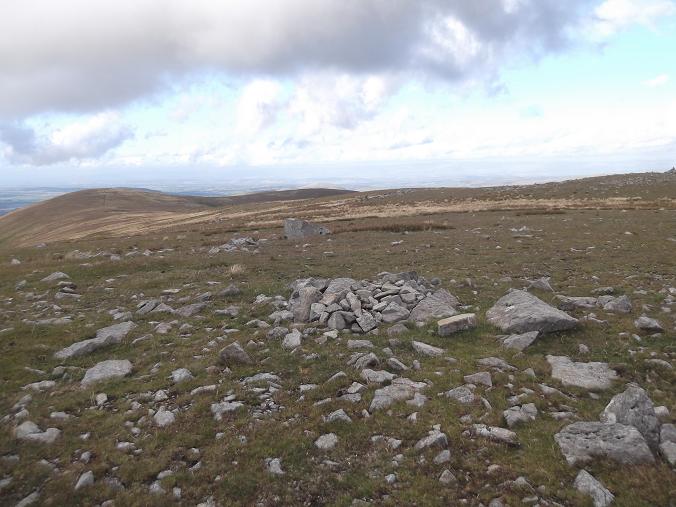 Hart Side was much the same - grassy moorland, a little bit lower, with another collection of cairns as well as an odd ditch. The day was improving, with the sun shining on the hills all around and brightening up the views, but I was sadly too far down under the main ridge for it to shine on me. 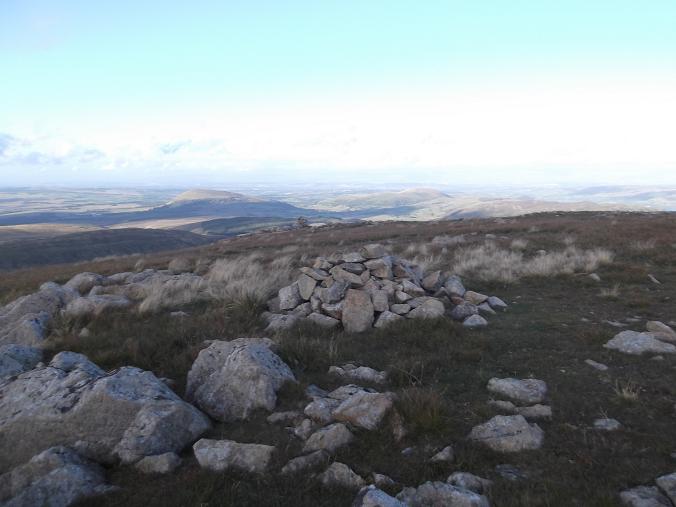 With the last fell of the day done, and the sun sinking, it was time to head down - I followed another small path back around the top of Glencoyne Head until I met the path going down to Nick Head and the industrial wasteland below. This is not one of my favourite places - not because of its looks, which I quite like, but because it's very WET - I'd had a nice dry trip until then. And then it was just down the zigzags at Stang End, with the feeling that I was almost falling out of the sky onto the hostel - its setting is a mixed blessing, but at the end of a long day that probably makes up for the long haul back up from the pub. It was just on 8 when I got to the hostel, and about 8:30 by the time I was at the pub, sitting outside with the very last of the light fading away.


Dodds.gpx Open full screen  NB: Walkhighlands is not responsible for the accuracy of gpx files in users posts

Re: Clough Head to Hart Side

For anyone who would like to get it right, this map shows the clear path running top to bottom, the green path near the top which I should have taken but missed because I joined the main path too far south, and the grassy strip at the bottom which I went up!