When I announced on Wednesday evening that I was heading for the hills, the reply from my wife was " are you mental?? " .......well, for anyone reading this, you will agree that yes, we are a little but the hills also keep us sane!!!!

The East of the country looked more favourable, so Glenshee was the plan. Still not the best weather but "doable". An early start of 5.30am to get the most of the day was the idea; the sack was packed and the lunch was made. So, Bez the Black Labrador and I boarded our transport for the day, Jess the campervan, and set off north. A pee break for Bez and a coffee stop for me later and we were at a snowy Devils Elbow car park at first light. 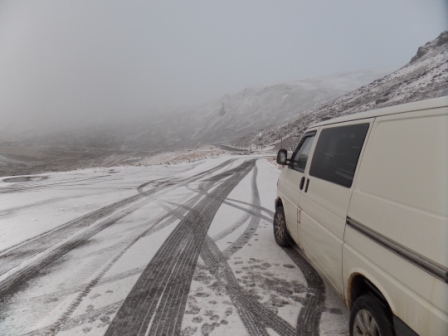 It all looked a little sinister at this point. Snow showers and low cloud made me doubt the decision to drive 2 hours north. Was my wife right, was I actually mental!!!???

On with boots and gaiters and waterproofs and hat and gloves anyway. I've came this far, lets have a wee look, see how things are. Just as I'm about to set off, a snow plough drives through the car park; he looks at me and I know he's thinking the same as my wife!!! What am I doing here!!??

Bez leads the way, he's got no such fear of the unknown. Up by the stream, a little path just visible under snow, winds its way gradually upwards. It's not so bad now, the storm clouds have gone; I can see the tops. 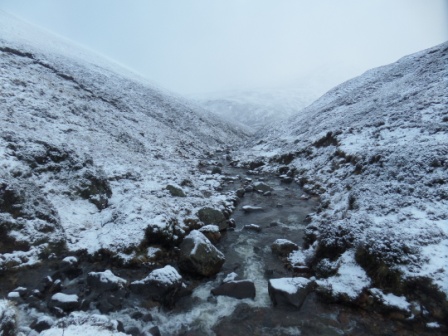 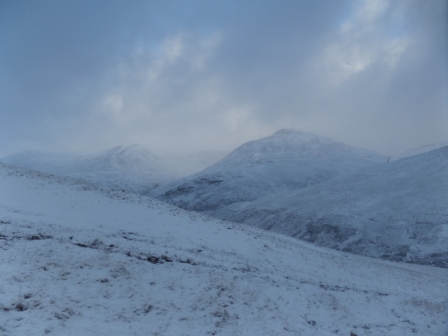 Now the climbing begins, what there is of it on this route!! Up to the bealach between Meall Gorm and the lower top of Creag Leacach, through the snow and the rough ground. But, that's pretty much the climbing done. I am safe in the knowledge that I will be above 900m for pretty much the rest of the day. I decide to go to the south top, well it was there right in front of me

. Over the rocks I trek, Bez still leading the way. As I reach the summit, then start to descend, I soon have to don the crampons as the snow turned to ice. Just as quickly, they are off again as it's back to rock........maybe I should have skirted the edge of the southern top

???? The weather had worsened again. I soon donned my goggles; Bez had no such gear with him!!!! But the summit was not far and we soon arrived. 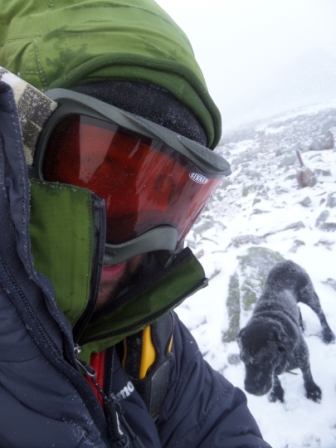 Now there was a wall to follow. That will help in ever worsening conditions. 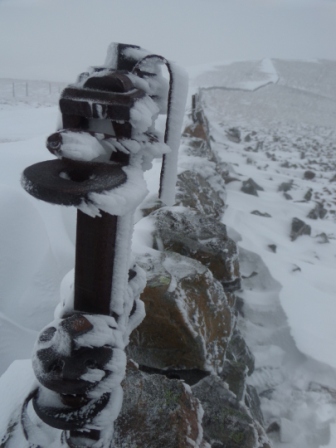 Bez knows when it's hard going, having completed over 50 Munro's, so he tucked in behind me for some rest bite from the wind. I ploughed on through the wind and snow to the cairn marking the point to change direction. Map out, compass out, fingers freezing, but I got a bearing. We were off again. Whiteout. Big plateaux. Doubting myself!!!!!! Double check the map, the compass; get the GPS out. It's all good, but it just looked so bad!!! Onwards, into the abyss( or so it seemed! )...... but I soon reached the summit of Glas Maol, or stumbled upon it maybe!! 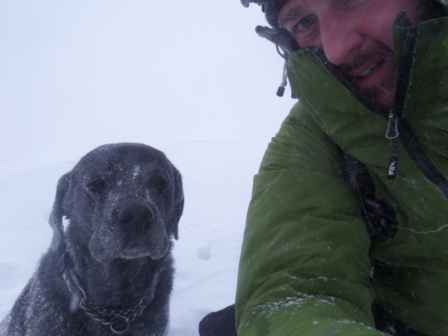 Now to find myself off again, via the ski lifts then down by the Alt a Ghlinne Bhig ( well that's the paln!!!! ). Easier said than done in the white out I know faced. I had my first pit stop of the day on the second summit, halving my roll with Bez. Poor dog was blending in with the background by now. 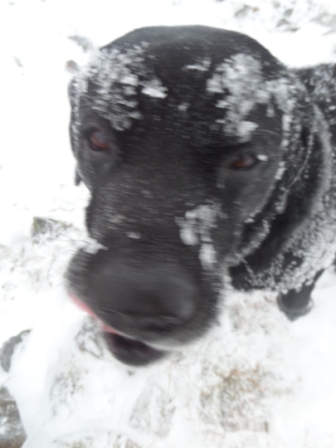 Map out, compass out, bearing took, walk 50 yards, doubting the compass again; GPS out, walk 50 yards, doubt the GPS; back to the compass...... the joys of solo walking, no-one to bounce off of!! BUT, we were no sooner off the plateau, and the weather changed. Yeah it was still cold, still windy but the cloud lifted and we could see! Easy now, sort of! Walked down steeply to the ski lifts then followed the big path down the ridge. Views got better too!!! 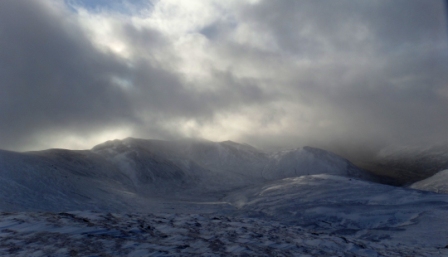 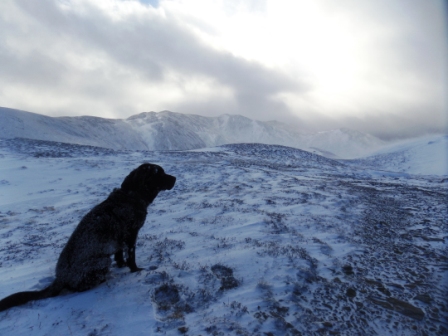 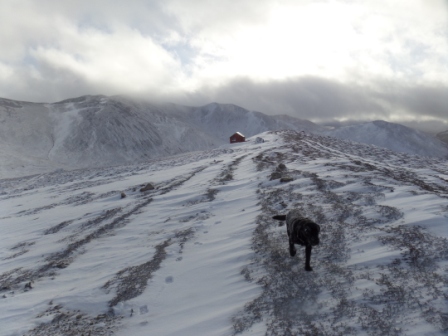 Sounds an epic day but in realisation, I was back at the van at 1.30pm; plenty of day left, could have done another couple!!! But, that was the plan, having completed the four further north in November. I had a proper cuppa at the van looking up at my day!

Looks like it was OK out there in there end - I got scared off by Mountain Weather saying that the gusts were over 100mph in the SE Highlands, "mobility tortuous"! Did you have much trouble with high winds?

This made me laugh my wife asks me the same question during the summer, brilliant idea having a mobile home though. Cracking walk report.

dwaugh wrote:Looks like it was OK out there in there end - I got scared off by Mountain Weather saying that the gusts were over 100mph in the SE Highlands, "mobility tortuous"! Did you have much trouble with high winds?

As the day progressed it got better, from about lunchtime, but I'd say it was about 40-50mph on Thursday morning. On summit of Glas Maol was probably the weather at it's worst.

sonic wrote:This made me laugh my wife asks me the same question during the summer, brilliant idea having a mobile home though. Cracking walk report.

Thanks. She thinks I'm mad even in the summer but at this time of year, with the weather as it has been, she is positively pulling her hair out!!

Thanks. I've actually been a member for a while but had to set up new profile.....new email address and lost login details. Took me ages to add all the completed hills again

I think Bez was just happy to be out the wind, sleet and snow at that point!!!

Well done on first report and on getting out in this weather!

dogplodder wrote:Well done on first report and on getting out in this weather!

Thanks. My lab is almost 11 now, so he doesn't get out as much now but that route was fairly short. He loves the hills though and it is good company on solo trips for me