I was keeping this lone Munro for the Winter time given that it has no exposure, is close to a road, so should be a relatively easy day....however this day reminded me that no hill is easy in Winter in Scotland no matter what it looks like on a map!

We stayed in Crianlarich on Thursday night, anticipating the snow that would fall overnight. However we kept getting wakened up by our crappy car alarm in the car we had hired from the airport.....5 times in the night it went off! In the morning we were pretty exhausted from the lack of sleep, but were determined to go out and do something. The snowfall wasnt that bad, and the roads were good. We had done a recce on the Glen Lochay road the afternoon before to make sure it was accessible. Although slippy we were able to reach the start of the walk without any issues and decided to go anyway even if the car alarm was faulty!

The start from Glen Lochay side has about room for 3 or 4 cars on the side of the road, just past the bridge near Duncroisk (528363) at the bend of the road. A large sign marks the start of the route, beside a gate to a field. 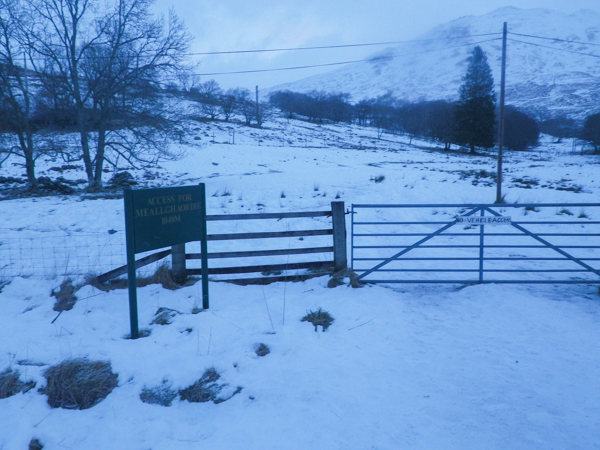 Start of walk at fence on Glen Lochay road

We were treated to a glorious sunrise as we started up the track. On route, there are quite a few old ruins (shielings) maybe on another day, they would be worth exploring, but not in winter! The track also has some nice old trees, so I'm sure this would make a nice wee walk for the summer just following this track. Shielings along the way

The track itself was easy to follow on the west side of Allt Dhuin Croisg and progress was good. After about 2km you come to another group of Shielings and wall. There is a large stile about 100m to the east which takes you over the wall. We kept following the track as long as we could as we could see the snow was deep around us. Eventually you come to a fence, which marked our exit off the track, and started to follow it NW up the main ridge of Meall Ghaordaidh. Going was slow.....the snow was knee deep all the way. We tried to follow the tufts of grass to stop from walking into the waist deep snow trap minefield in front of us. But it was a tiring process. Getting higher up the ridge

As we got further up the wind picked up and wind chill was pretty extreme. It was necessary to try to cover all our faces from the biting cold as it blew directly into us. Preparing for the gale force winds and whiteout! How a picture does not show the wind !

The weather also changed from whiteout conditions, with driving horizontal snow hitting us, to glimpses of blue sky and glorious sunshine. Such extremes in weather you can only experience in Scotland! In those moments of blue sky we were rewarded with fantastic views of the surrounding hills and Glen Lochay...our Narnia for the day! Momentary glimses of the sun Plodding along in whiteout We got into a system of taking turns to kick steps as we got steeper.As we got higher, some of the snow started to freeze, so as you thought you were making good progress, you hit another trap and again fell into the snow again! It was knackering. Towards the top, it got a bit rockier and steeper... I wasnt sure if this was a blessing or not, as you slipped off the rocks too. Eventually we got to the top 4hrs from when we started! Luckily there was a walled pen we could hunker down, and refuel. We couldn't stand without being knocked over with the ferocity of the wind. The hot chocolate was manna from heaven I can tell you! Getting to the top (at last!)

We went back a slightly different route, going more south then east. It was easier going down as the wind was on our back now but were glad we hadnt walked up this way. Glen Lochay hills in the distance The snow was much deeper and more traps. It was now starting to get a tad annoying, and falling waist deep in snow had long lost its comedy value it had at the beginning of the day! One of the snow traps!

At the stile we saw some skiers who had climbed the same hill and skied down....one of those moments where you wished you took up skiing! Just as we got back to the car at around 3pm it started to snow again. and were glad that we were off the hill. We were also concerned about the state of the wee road. It was covered in snow, but still drivable on and our skier friends kindly drove first to make tracks for us. A view of Glen Lochay on our decent Back to the car

On our return to the B&B we tried to fix the car alarm. However, it started going off every 10 mins....so the end of our day involved arguing with the car hire company to get it fixed, driving to Glasgow airport in a snow storm, sitting on the Erskine bridge for 4hrs after a crash had grid-locked all the roads, picking up our new car (hungry) and driving back to Crianlarich for midnight....exhausted and peed-off! Still, at least we did manage to get some sleep that night which was much deserved! The next day we made our apologies to the B&B for keeping everyone up the night before....at least we had a working car to try to enjoy the rest of the weekend! Oh, and my views of this Munro......its a wee bugger in the winter but still satisfyingly enjoyable!