I am no fan of cold weather, but somehow freezing temperatures are also fascinating and what’s prettier than snow-capped mountains?

Stepping out of my front door during early Sunday morning, a wall of freezing air hit me. OMG it was cold!

Doing a 180 C turn I was back in my house to retrieve my gloves…scraping ice from my car without gloves would have been no fun. 10 min later the car was ice free and I was on my way.

Driving on up north, I was a bag of nerves.

Solo winter walking? No bother! Driving in icy conditions and I am a nervous wreck.

I was relieved when I finally arrived and promptly drove past the parking spot.

The morning was glorious. A thick layer of frost covered the ground and Ben Dorain which never fails to impress me, was standing proud and snow capped in the rising sun. On the walk towards the farm I could not help, but to admire Beinn a Chaisteil. What a beautiful mountain! 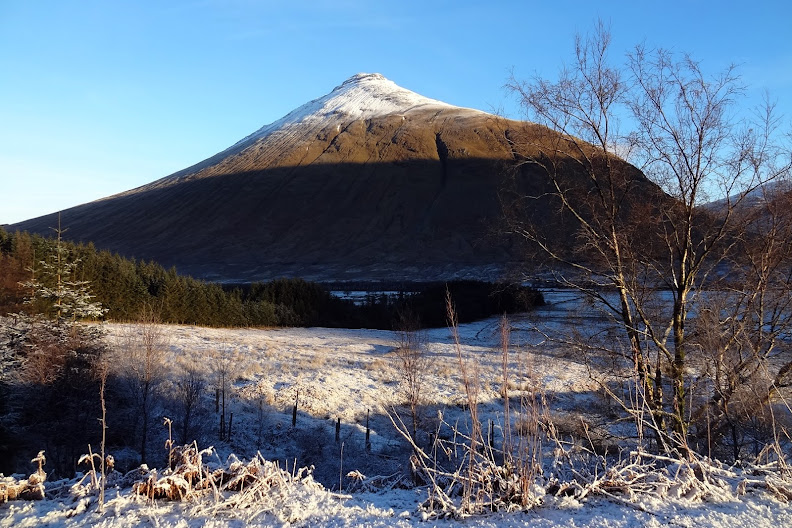 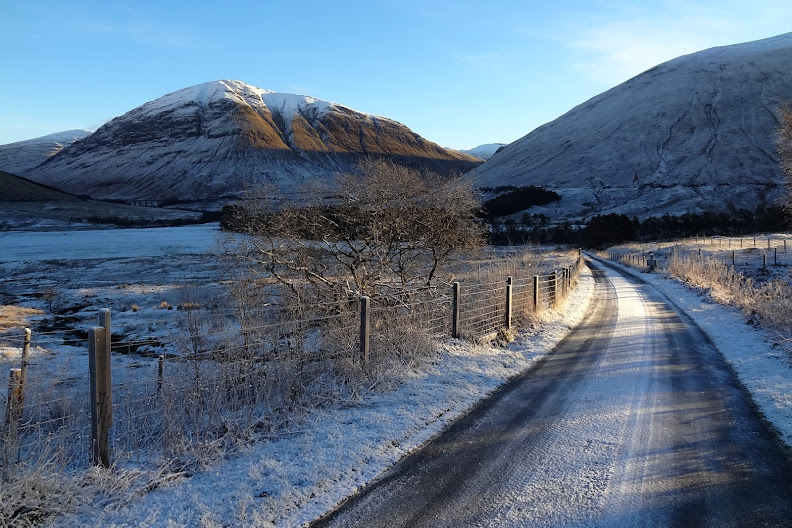 Beinn a Chaisteil towards the left

The path and Auch Farm behind the trees

Continuing along the path I walked past some buildings when the path split. Too lazy to dig my GPS out, I decided to take a left, crossed a bridge and was soon on a faint frozen boggy path. Walking along with the burn on my right side, the Viaduct came into view and I remembered the day I had taken the train from Crianlarich to Corrour station and had driven over it. It somehow made the experience walking underneath it more special. 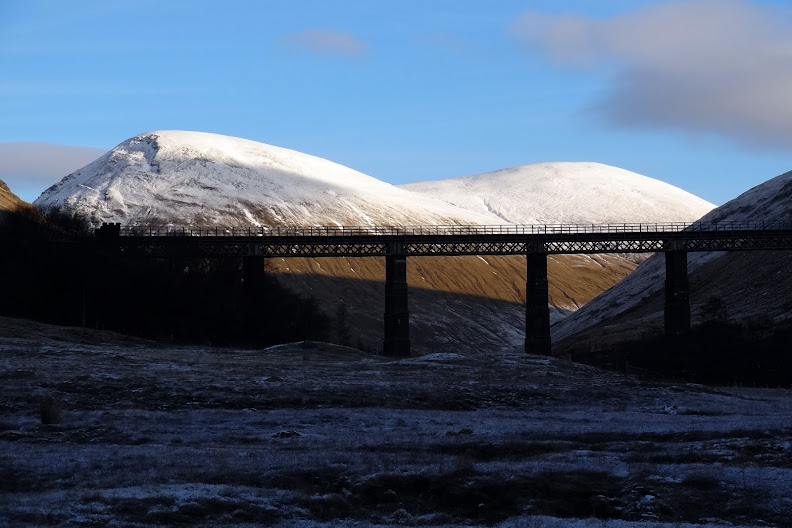 I can’t say I was impressed with the path I had chosen. It was luckily frozen solid, but I still managed to step into occasional unfrozen bog puddles.

Continuing along the path, I finally saw the proper path…on the other side of the river.

Knowing that I had to cross the river quite a few times I was not too bothered and continued alongside a deer fence. Another couple who was on proper path, soon disappeared into the distance and left me annoyed with my slow process. After a few kilometers my path joined the main one and just at the right time…as it had saved me a major river crossing. 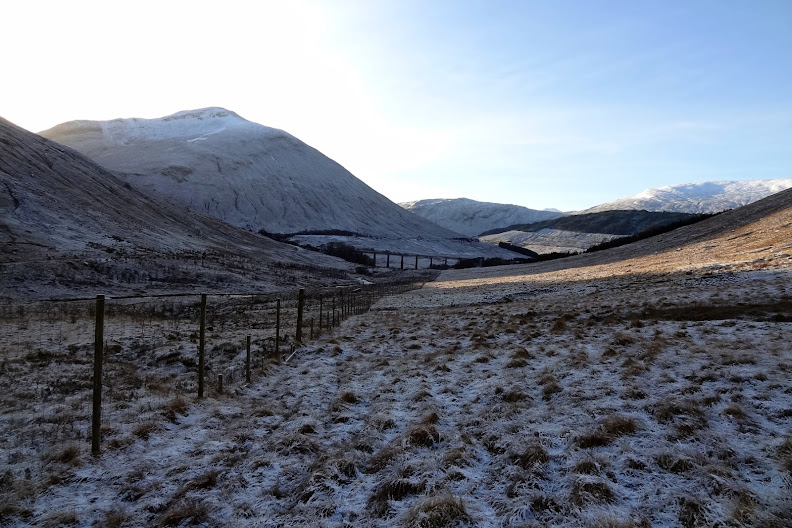 Walking along the deer fence , looking back 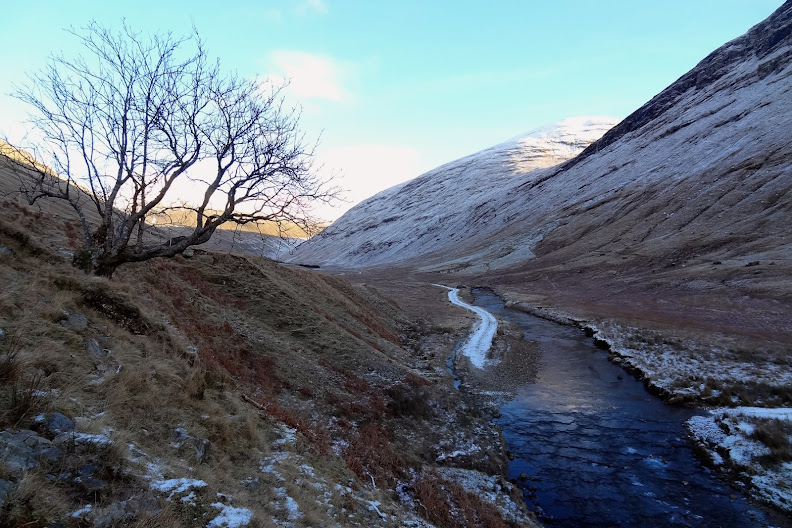 The mental crossings. The path stops (bottom right) crosses the river and continues on the other side...whats wrong with keeping the path to one site I asked myself! 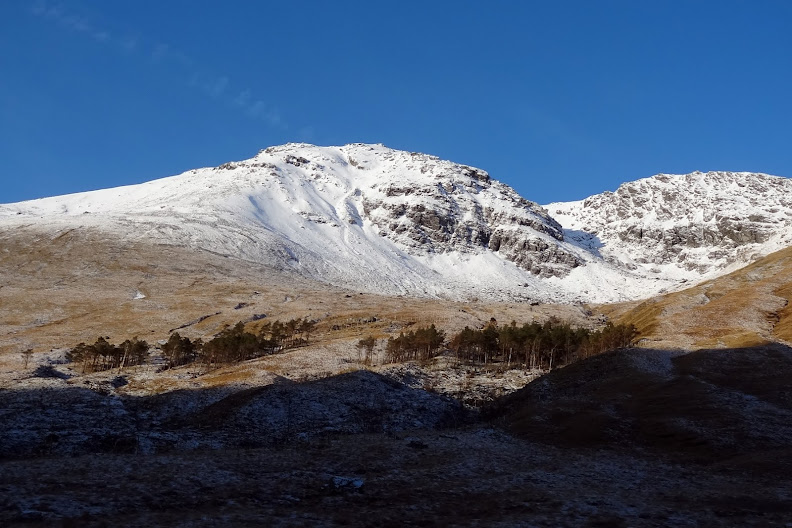 Lovely views towards the left

Continuing the path I noticed that the couple I had seen, seemed to have troubles crossing the river. Shouting over if they needed any help, they assured me that they would be fine. Walking on I was now faster on the path and managed to walk through the shallow river quite a few times, that was until I reached a wide and deep crossing. 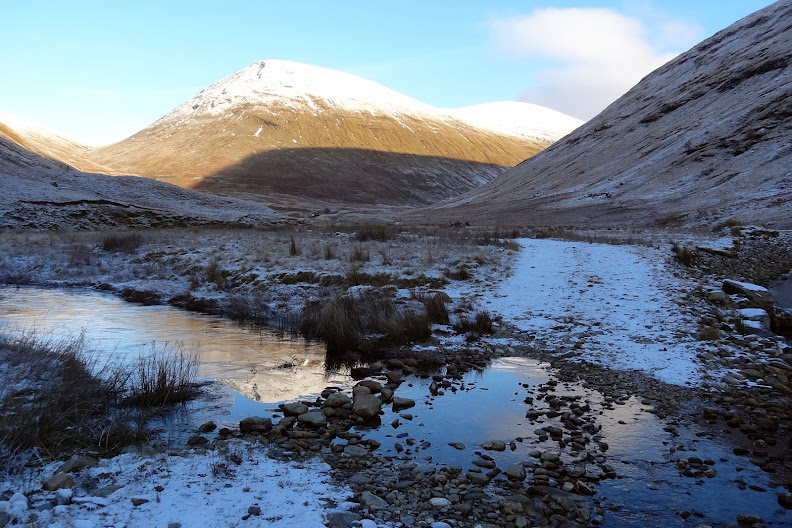 One of the easier crossings 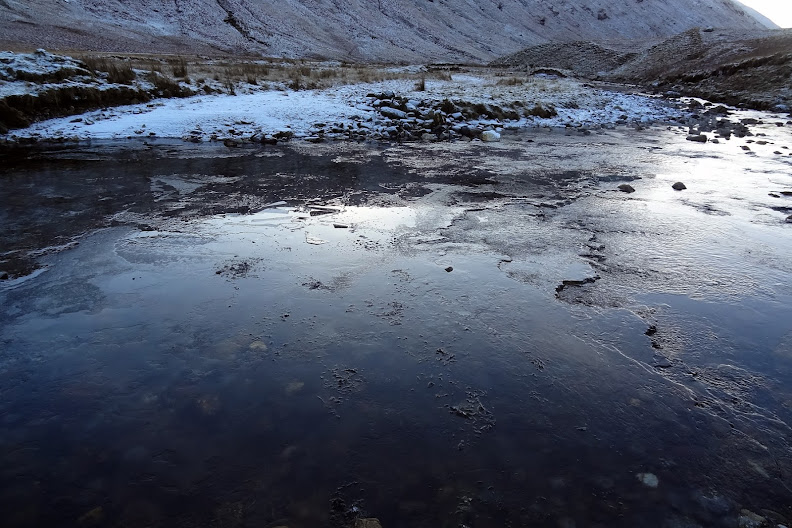 The crossing I did not fancy with my boots on

I did not dare to cross with my boots on, so the easiest solution was going barefoot! 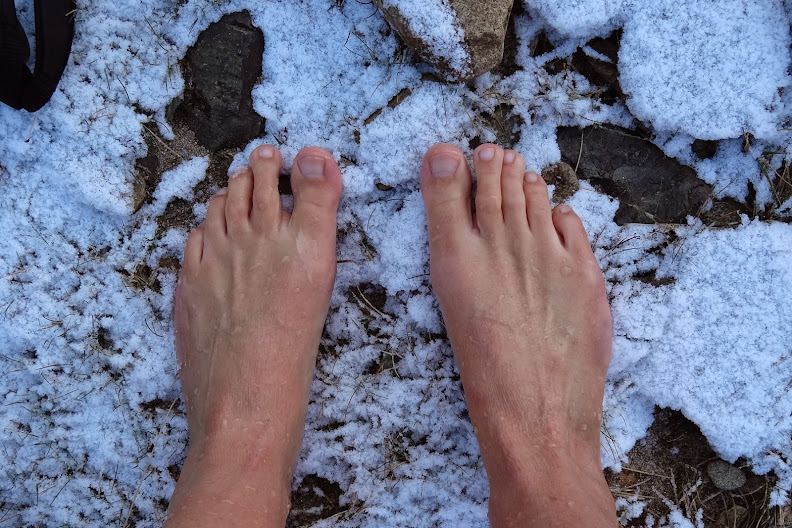 Mountain reflection on the frozen river 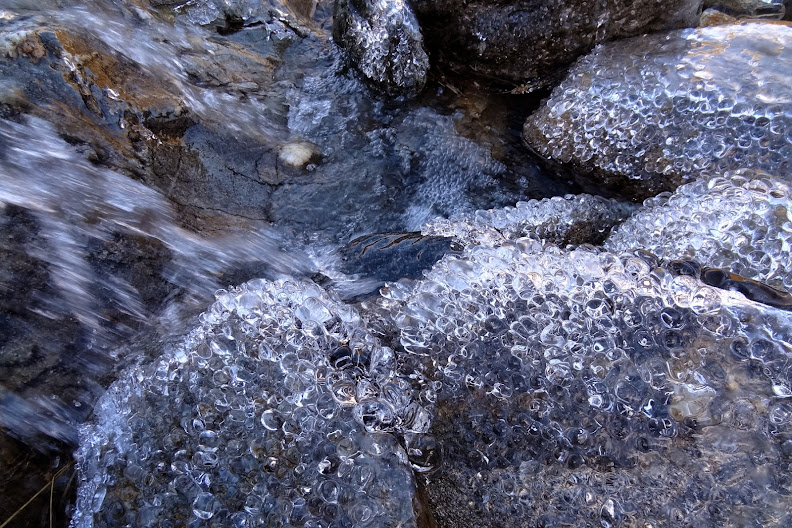 I arrived on the other site with shouts of “Argh”, “Freezing”, and a few more which are too rude to write down.

Walking through the snow, I reached a place where I could sit down and put my shoes back on. Needless to say it took good ten minutes until any kind of feeling returned to my feet…maybe I should keep bare footed rivers crossings for the summer!

Moving along I ditched the path and stayed on the hill site. It was hard going, but at least I started to gain some height. I had decided to take the approach from the left, as it seemed less steep and more graduate – a good decision at the end. 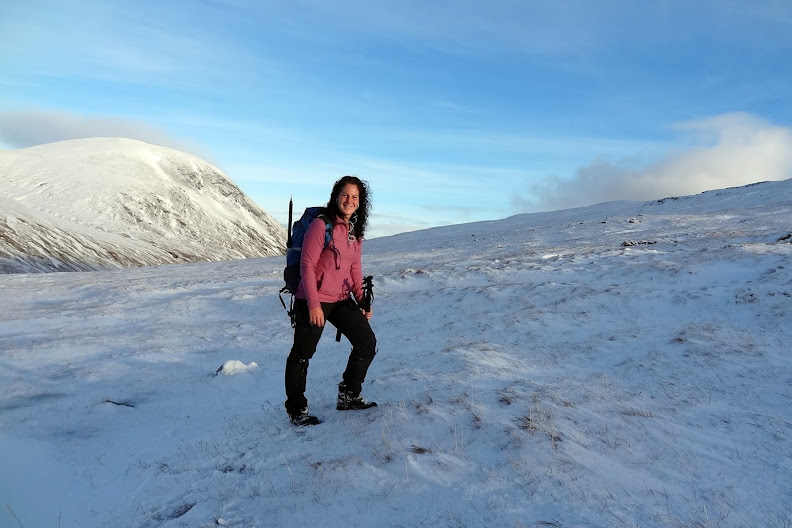 Below Beinn a Chuirn was the first time I checked the map and realized that I was close to a path. I continued on the path until it frazzled out and I saw the fence line which I used as a guidance for my walk up. Thick snow covered the ground and drove me insane as…

1. It was either soft yet deep snow lying on soft grassy ground – hard work

2. It was deep snow laying on hard rock- not too bad, until you step a hole…

3. Or I stepped on small hard frozen patches, which you only discover when you start sliding sideways down the hill, making you look like a complete idiot (and too lazy to get your crampons out , as 95% of the snow is still too soft for them) 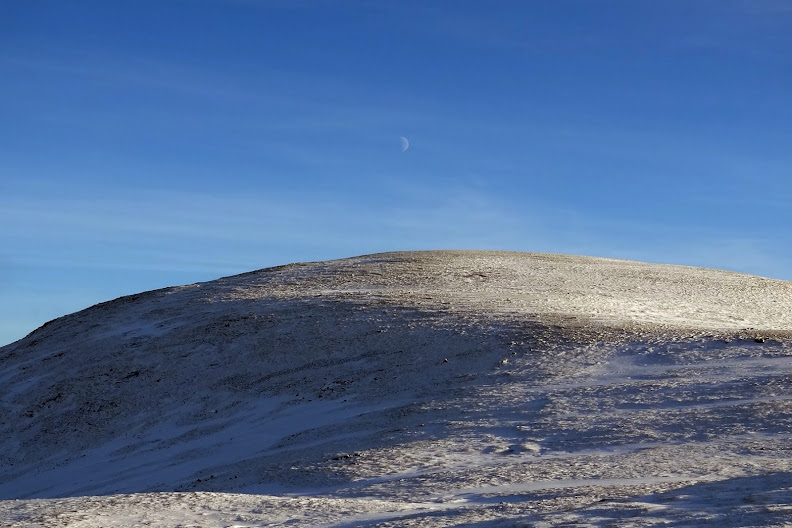 The top of Beinn Mhanach 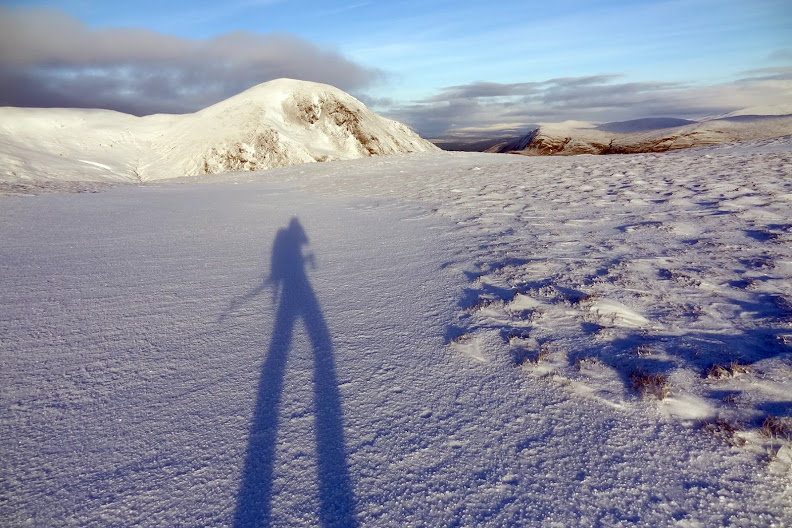 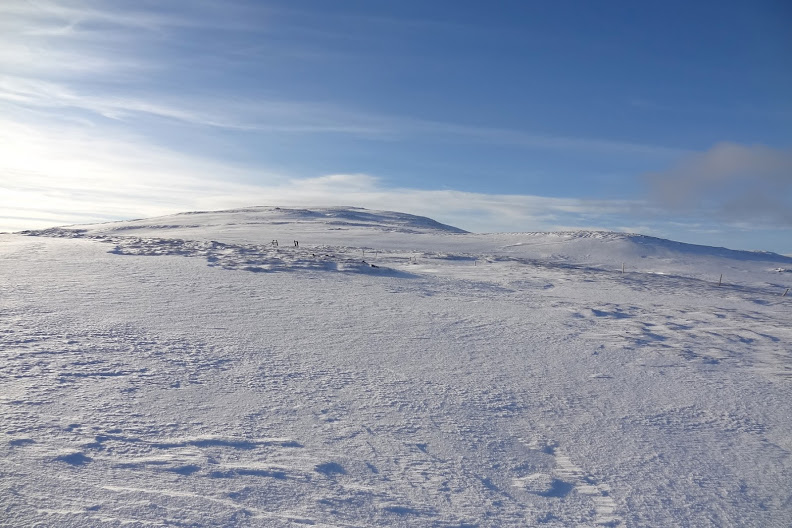 The bealach looking up towards Beinn a Chuirn

By the time I had reached the high bealach between Beinn a Chuirn and Beinn Mhanach, the ground improved greatly (frozen rock solid) and the last hundred metres height gain were easy going. While walking to the top the wind picked up and was absolutely icy. My head was hurting from the cold and by the time I reached the cairn, I had to put on my full winter gear. The thermometer read -5C, but the wind the wind chill factor must have been at least -15C if not colder.

But what a view! 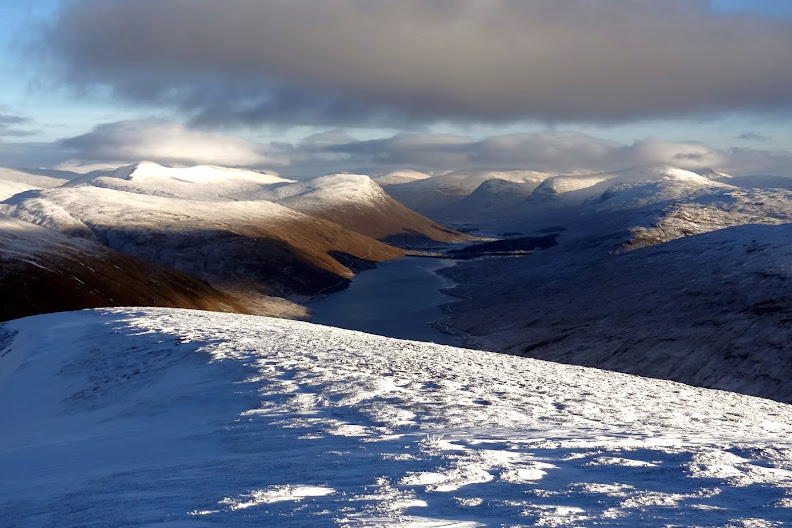 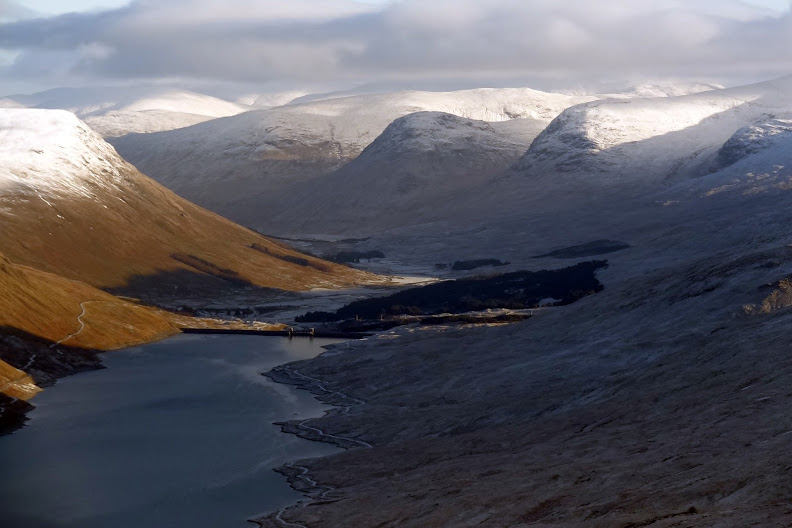 Zoom in towards the Dam and Lubreoch Power Station

Panoramic views towards the north/east 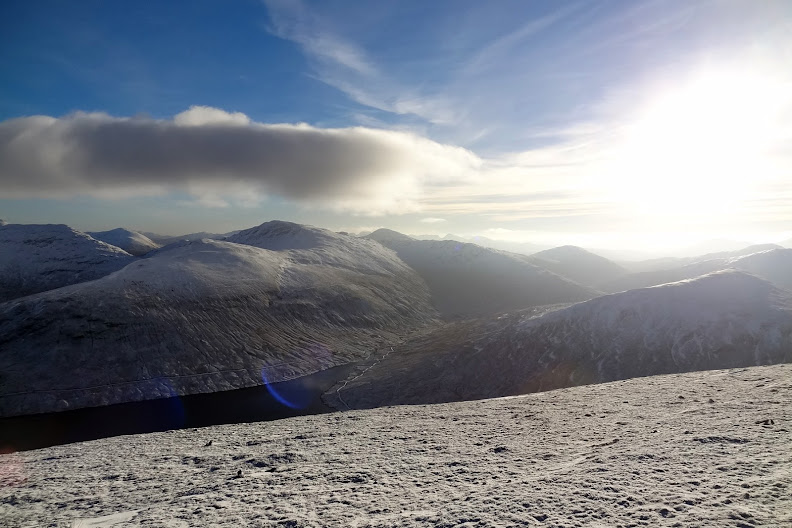 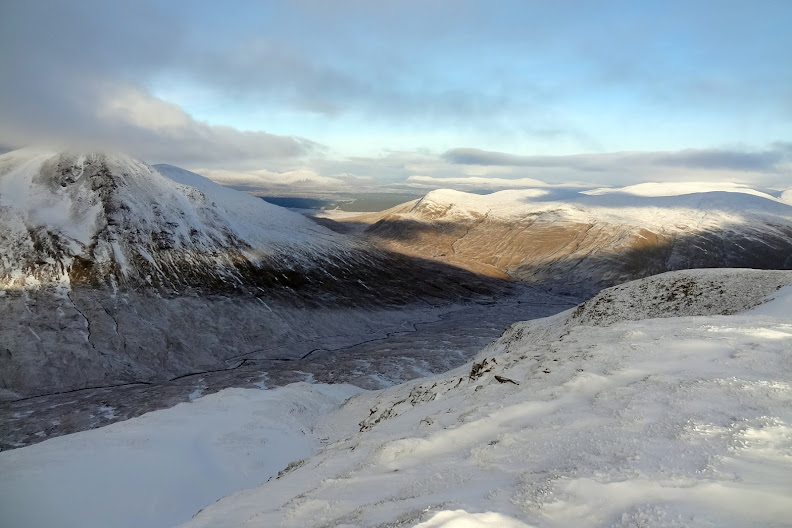 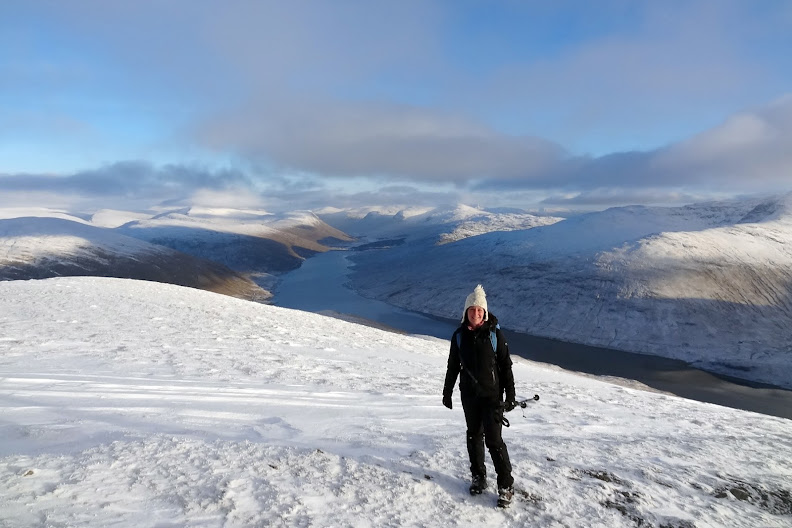 I stayed as long as I could, ignoring my hurting ice cold fingers in my gloves, taking picture and enjoying a cup of lovely hot coffee next to the cairn which gave only a little bit of protection. The cold finally drove me off the summit and I briefly considered taking the other side down, but decided against it, when the couple who had appeared as well, told me it was relentlessly steep.

Down the mountain and with darkness approaching, the sun light up the mountains in an orange glow. It was lovely. 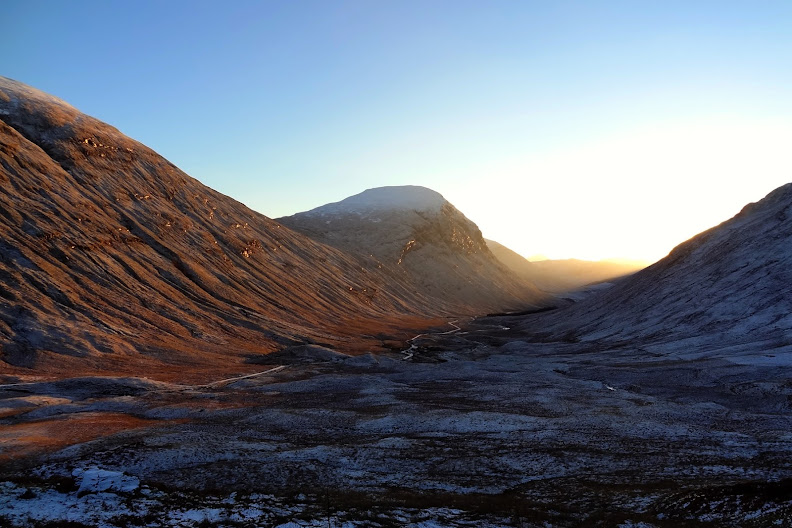 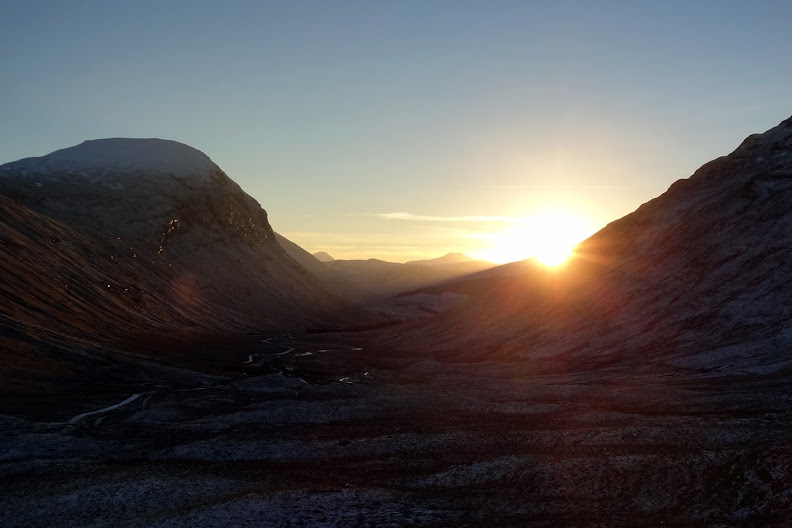 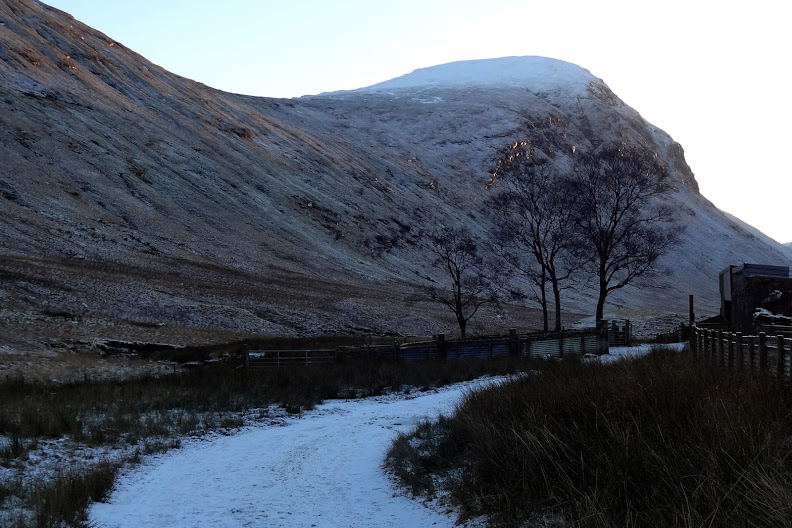 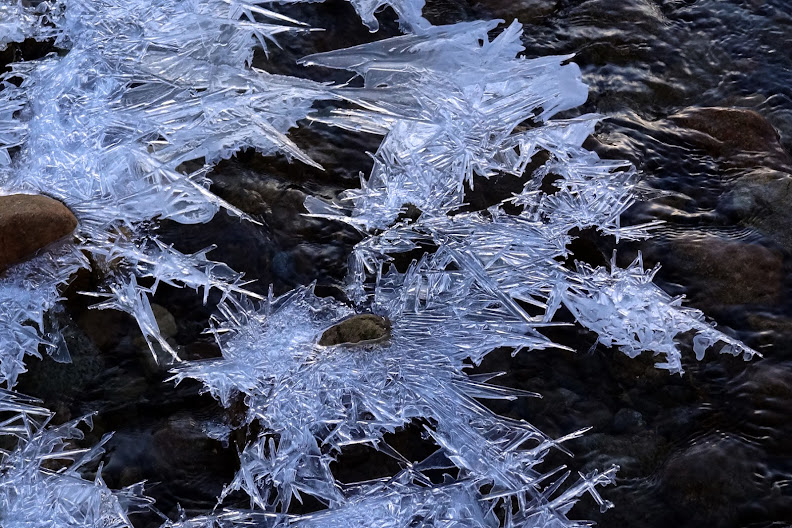 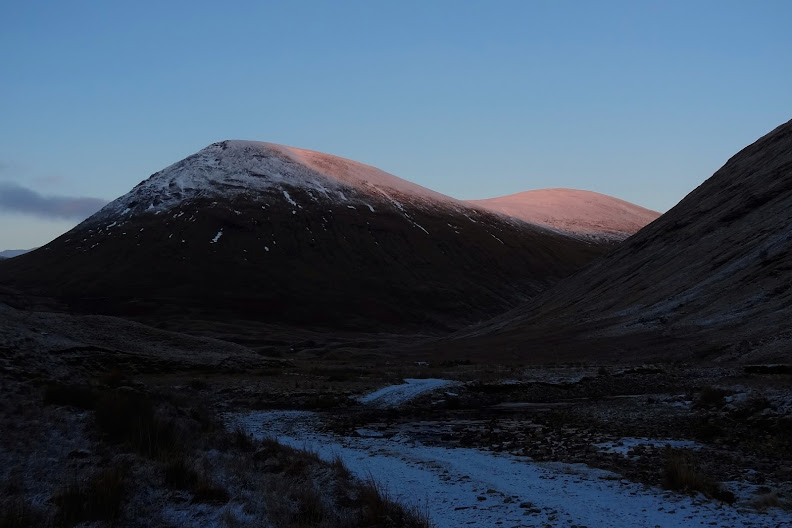 Alpenglow on top of Ben Mhanach 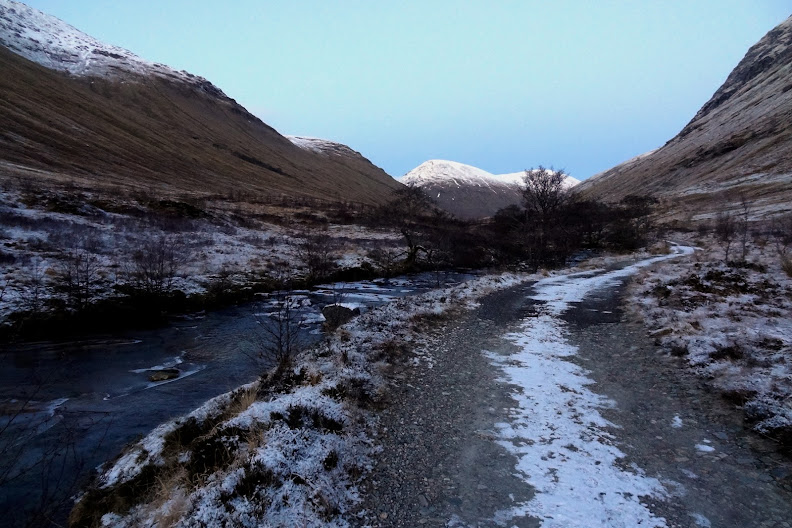 With the help of my GPS and previous knowledge about the river crossings (and not caring about wet boots) I managed to cross everything with boots on and was glad when I got back to my car…which I had to defrost yet again before heading back home.

Superb report Maja with some outstanding pictures, bare footed river crossings in this weather are way off my radar lol how brave are you

Good report ML, I enjoyed reading that and some absolutely brilliant photos, that reflected mountain in ice is just superb.
The barefoot river crossing however is mental

The early morning ones are huge, really imposing hills. Magic.

After a less brave, barefoot crossing earlier this month, I decided on knee length Sealskinz!

(you heard it hear first! Lol)
Not quite as 'hardcore' as your valiant endeavour, but a lot less hopping and swearing!

Weather was beautiful on Sunday, we were just along the road at Ben Challum. Cracking day, but hellishly chilly in the wind!!

Nice one..liked the images with the big long silhouette and the one with the sun going down.

It was certainly cold that day but can't complain as days like this are all too infrequent I guess. Long walk but well worth it - you got some great photos. The good thing about crossing cold water is drying your feet and putting them into dry socks and boots - they seem to heat up quickly

"I did not dare to cross with my boots on, so the easiest solution was going barefoot!

oh mountainlove, i used to think you were mad, but now i know your nuts

Nice one ML- I remember getting wet feet on this hill too - albeit in a different manner.

However that wasn't on a freezing day like Sunday -

Great report and looks like you had a fantastic day!

Great pictures. Probably good to be nervous when driving in winter (thinking of the lorry that wrote our car off on Sunday). I'd be pretty nervous also about plunging my feet into freezing cold water!

@Geo, Al...many thanks. Think we were all lucky to get a beautiful day at the end of the year. Actually had been thinking of Sealskinz sock for a while...lol maybe should just invest in some.

@ Chris...haha knee lengh Sealskinz...when will you share a picture with us..?

@ rockhopper...it took longer than I thought to be honest. Imaged they would be like cold fingers when they warm up...luckily not as this process can be pretty painful

@mgmt!...haha the ideas which seem ok at the start

@ Murray...thanks. Was actually thinking that the path could be quite tricky on bikes depending on the conditions...water in over boots...lol had that pleasure once

Superb report !! Wouldn't have ever considered taking the boots off lol. Awesome

Excellent fotos. The river crossings were just as cold in the summer!

Another hill I've still to do. Cracking report and pics. The ice cold water good for the ankles though..