23 people think this report is great. Register or Login free to be able to rate and comment on reports (as well as access 1:25000 mapping).

our_route.gpx Open full screen  NB: Walkhighlands is not responsible for the accuracy of gpx files in users posts
This is my first walk report, though not my first attempt at one. Around this time last year I tried to write one but couldn't upload any pictures, so sheer frustration

led me to abandon it and not try again until now.
I had a week off, the perfect opportunity to hit the hills but I came over all "cannie be bothered". Any and every excuse was used to keep my backside planted firmly on the couch. Not until the saturday did I finally give myself a shake and headed up ben ledi. That got me in the mood again but it was back to work on monday.however my day off this week was tuesday so not too long to wait.

The weather report said cloud in the west and clear in the east, but the higher summits may be above the cloud. I decided to head for ben more hoping it was far enough east, and high enough to be above the cloud if it wasn't.

I pulled up at the roadside just as another guy was heading off, I faffed about a bit, had a bite to eat, got ready then set off up the winding track,left the track and headed straight up the steep slope. It was pretty dull but sunshine on the slopes on the opposite side of the road offered some hope. 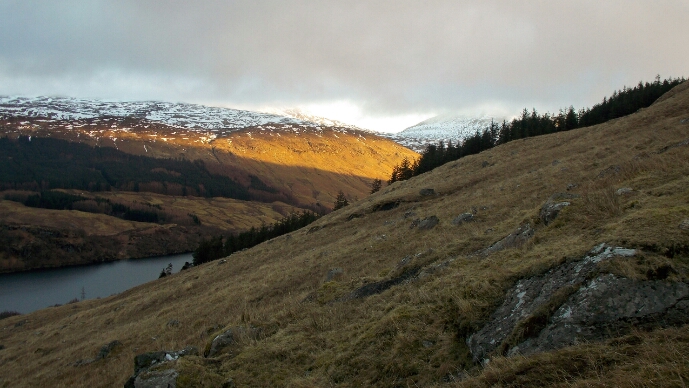 Then I walked up into the base of the cloud and things became interesting, the cloud made everything very wet and the the temperature froze it. There was a thin coat of ice over everything and I started sliding about like a newborn giraffe standing up for the first time, it became so bad just standing still was a major effort, so on went the crampons and off I went again.I soon came to the snowline, then around eighty metres from the summit suddenly I was above the cloud.

The views from the summit were stunning, a blanket of cloud to the west, and really clear skies to the east. The cloud was streaming over stob binnein and the bealach like a massive fast flowing river and disappearing into thin air at the other side, I really wish I had recorded it but photo's will have to do. 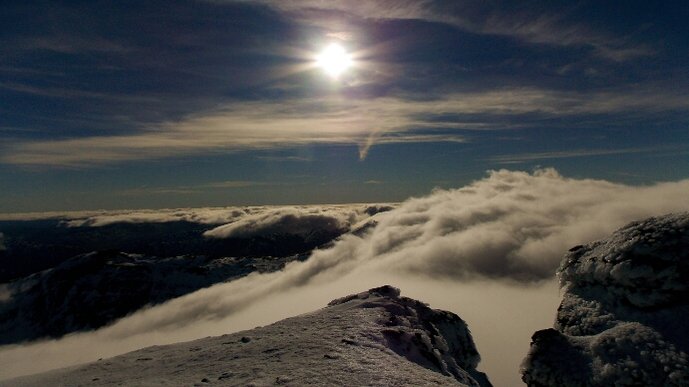 Looking towards stob binnein with cloud streaming over it 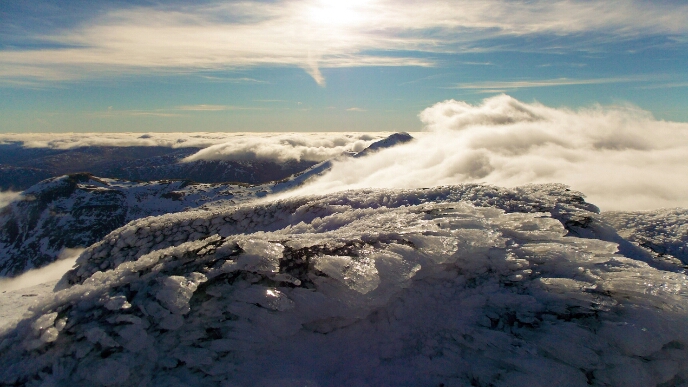 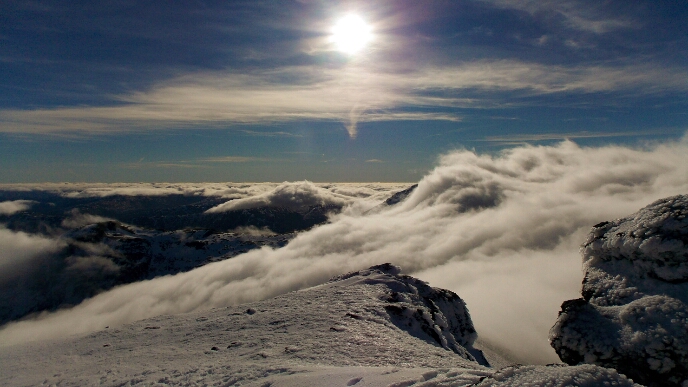 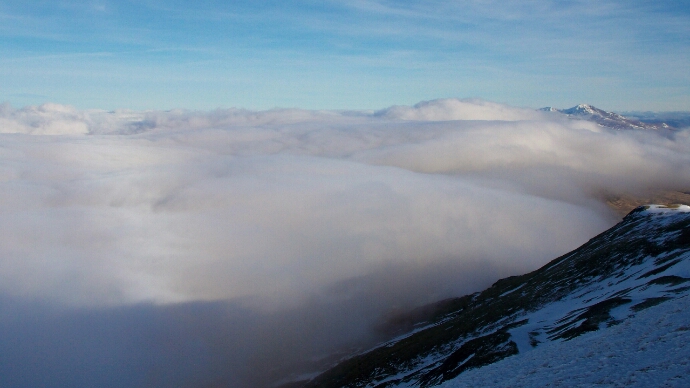 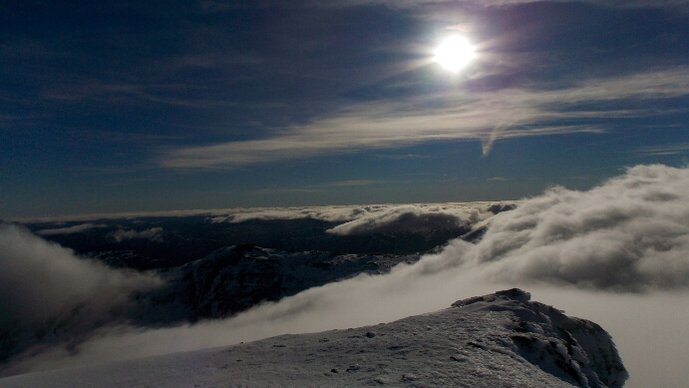 I stayed here for around twenty minutes marveling at the show the cloud was putting on then set off down the steep slope back into the cloud to the bealach hoping that the cloud on the next summit would drop a bit for more spectacular views.
I wasn't disappointed, the cloud level dropped a fair bit, at least 100 metres, so I climbed back into glorious sunshine again, I turned around and there was my first broken spectre. 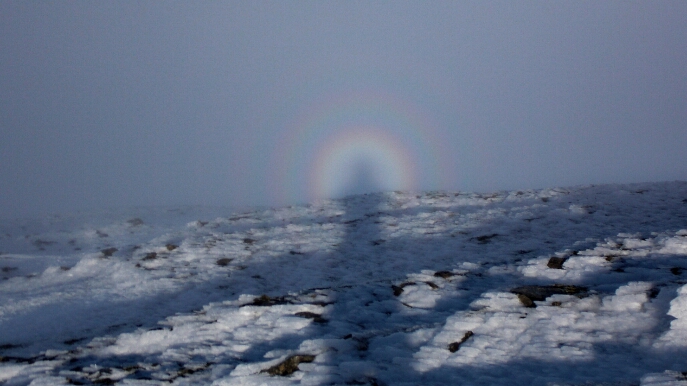 As it was, it stayed there all the way up and all the way back down again til I once more walked back into the cloud again..amazing.
Now I hadn't seen another soul all day apart from the guy at the start (never saw him again) so I was a bit taken aback to find a group of ten or so on the summit, turns out they came up from the south. 5 minute's later they made their way down and left me the summit and the views to myself, and it was a joy to behold, it's just a pity photos really don't do it justice. 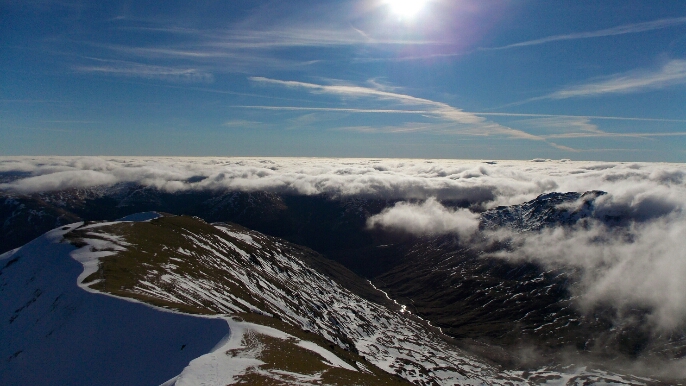 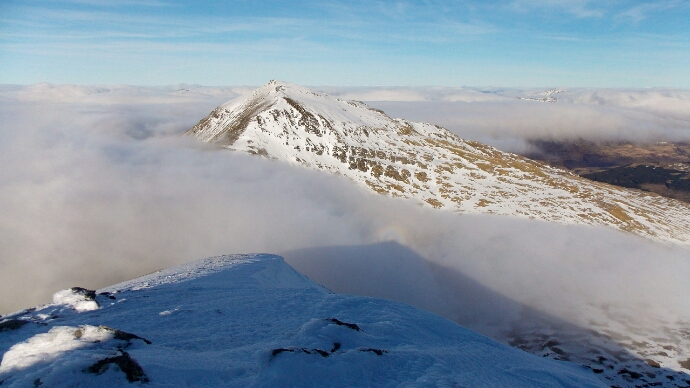 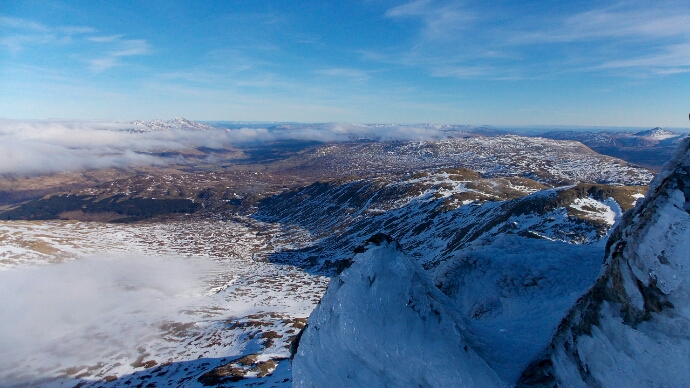 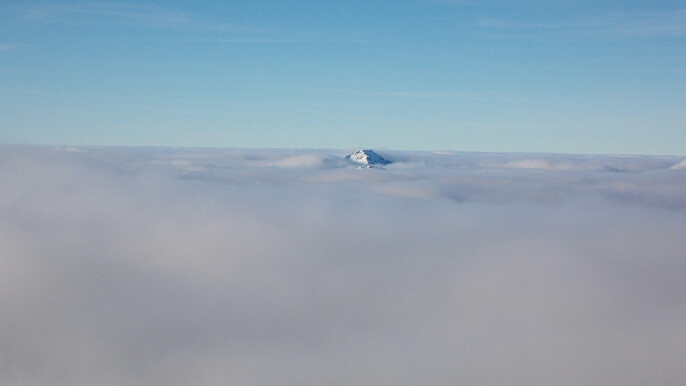 West, I think that may be ben lui 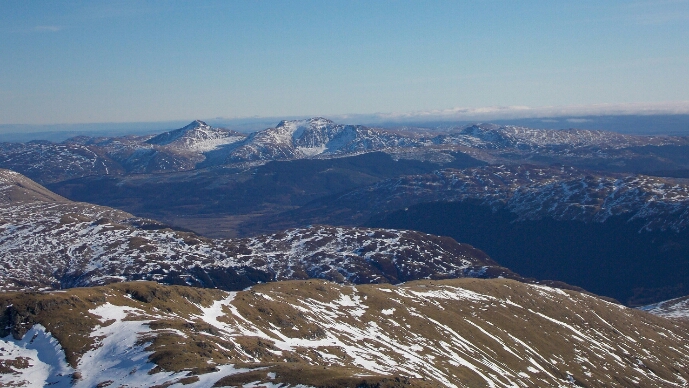 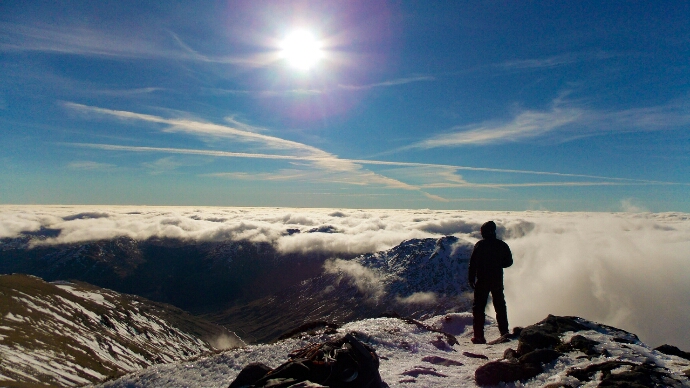 
The walk down was pretty uneventful apart from sinking thigh deep in snow a couple of times and the usual punishment of the legs a steep descent brings, the walk down the glen to regain the track was quite pleasant as well.

This walk was quite hard work at times, but I was rewarded with spectacular scenes at the top of both hills......magic

Enjoyed reading that, well done on completing your first report

Some great pictures, as you said unfortunately photo's never capture the true feeling of the moment

Many more beautiful days in mountains !

Thanks, it certainly ain't a 2 minute job, I'm not going to say how long it took

You certainly got a good day for it, good report and some crackin pictures ...thanks for sharing

and with blue skies, sun, a brocken spectre and some stunning inversions, it looks like it's one of those days you'll find very hard to beat ! Enjoyed that - cheers

Thanks rockhopper, I'll be a lucky man if I get another day like that

If that doesn't get your juices going nothing will, stunning stuff and wonderful pictures. Bet your back up the hills very very soon after that. Those days are unforgettable

Thanks R.M. can't wait to get back out there, it was magical.

Lovely report looked amazing hope to be up there next week ,,, thanks ,

Glad you worked out how to post the photos as these are stunning! I'm hoping to do these two later this year so probably won't have the white stuff - which is very photogenic but does make it harder work!

thanks greigo & dp, hope you have as good a day as I did up there

Nice report that Roughwalker and wonderfully atmospheric photos. You should take up report writing

Superb pics, great day you got there

Thanks londonwalker, yeah that was me you and JC met that day, another suberb day as you said

Top
23 people think this report is great. Register or Login free to be able to rate and comment on reports (as well as access 1:25000 mapping).