Parked in the parking area just before the level crossing at Dalnaspidal and set off just after 0500hrs.


LochGarry activelog 5apr2015.gpx Open full screen  NB: Walkhighlands is not responsible for the accuracy of gpx files in users posts

Head torch on for the first hour or so – it was rather foggy and couldn’t see much through the clouds of water droplets in the air. Still quite cold but an easy walk down the west side of Loch Garry on a good track. On reaching downstream of a waterfall, had to make a little diversion to find a way across the Allt Coire Easan. The track got quite a bit rougher and boggier from here on but it was starting to get light as dawn arrived.

Another little detour westwards to cross the Allt Shallainn by the bridge.

Then south east towards the bothy – came across a wee cairn marking the start of the track up Beinn Mholach. 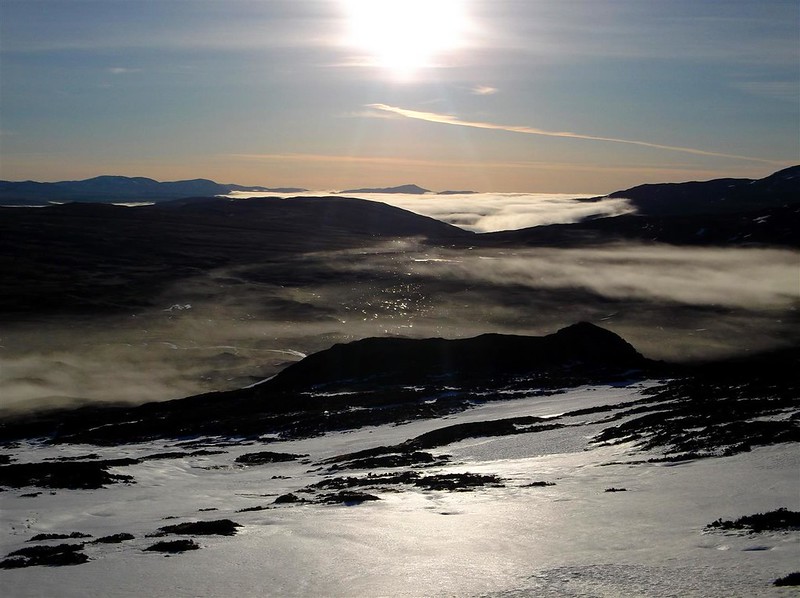 Soft snow here and there made the going harder at times but not too bad. There were some large snow patches but no need for winter equipment. Hills further afield starting to appear by now.

Some areas of deep lying snow which looked as though it could be unstable – just a case of avoiding these bits.

Hardly any wind at all – was getting very warm in the sun.

Got to the top – substantial cairn and trig point.

This must be one of the best summits for views around – clear all round. Self portrait.

Had a long stop here sitting in the sun and having some food. Realised later that should probably have brought some sun lotion.

Eventually had to get up and set off. Probably could have taken a more direct route down and round Gualann Sheileach but wasn’t sure about the snow conditions having seen some deep sections on the way up. Opted to go back down the ascent route.

Nearly back at the main track could see two walkers heading back up towards Loch Garry – think they may have spent the night in Duinish bothy but didn’t get down in time to meet them.

Walked round to have a look at the bothy.

Had a look inside – looked clean enough but there was a cloth on the floor which looked like mice or rats had been chewing it.

Back out of the bothy and followed the main track southwards to the east of Gualann Sheileach.

Struck off eastwards at what looked like the most suitable point towards Creag a'Mhadaidh.

Bit of boggy ground to cross but wasn’t too bad. Then uphill towards some crags – turned to the right to go round them then up to the summit. No snow problems here.

Another good summit for views – stopped to sit in the sun and have some more food.

Headed off initially NE then more northerly towards Meall na Leitreach. Looked like there was some rather boggy ground to be crossed – turned out to be worse than originally thought. Encountered numerous peat hags – bad enough normally but as many were filled with water had no option but to go round them. Ended up going further east than planned but did manage to find a way across the allt.

Then started in a northerly direction up towards a rather large walled ruin.

There were some old traps in timber logs on the walls but they weren’t baited.

Stopped for a break in the sun then started in a NW direction to avoid a hill area to the west. Came across a rather new looking hill track which wasn’t on the map. Followed it for a wee while – easier way to gain height but it then started to go off in the wrong direction. Left the track and headed directly towards Meall na Leitreach.

Was too far to the east to see the Loch Meall na Leitreach but had a straightforward walk to the summit.

Now just a case of following the track back down to Dalnaspidal. Some very deep areas of snow to be avoided on the way down.

Crossed the water using the pathway and met a couple who were on a daytrip walking their dog. Back at the car, got changed and drove back to Glasgow. Another walk which had taken a bit longer than planned – a mix of longer stops in the sun, not back to full fitness and being a bit tired – can’t complain though on days like this. Ended up with a rather red face and neck from the sun - maybe should’ve taken sun cream with me after all.

Good to see you getting out and about again RH
A big route that one - I had originally planned to do this pair using that route but wimped out and did them singly
Bogs around Meall na Leitreach aren't much fun.

Aye, your pics make it look amazing.. I especially like the frog

Some nice pics RH. I climbed Mholach on my birthday last year and wondered if anyone would join it with Meall na Leitreach. Some size of carirn eh ?

That brings back some good memories!

Great stuff, rockhopper. The Drumochter region looks good with lying snow and sunshine; I remember that well from last March.

Nice one RH will use this as reference as I had looked at this route with maybe a stay in the bothy, was it in good condition? The dogs would be with me so mice/rats should not bother me too much

Some going after walking the day before too. I did the Luss Grahams yesterday and really struggled, was a wake up call

Some brilliant photos and a long route !

Was in Duinish many , many years ago January 83 or 84 minus 16 and thick with snow full moonlight night thanks for remindning me of the place ,clean forgot about it

Stunning photos and a great read

Beaner001 wrote:Nice one RH will use this as reference as I had looked at this route with maybe a stay in the bothy, was it in good condition? The dogs would be with me so mice/rats should not bother me too much