Share your personal walking route experiences in Scotland, and comment on other peoples' reports.
Warning Please note that hillwalking when there is snow lying requires an ice-axe, crampons and the knowledge, experience and skill to use them correctly. Summer routes may not be viable or appropriate in winter. See winter information on our skills and safety pages for more information.
Post a reply
22 posts • Page 2 of 2 • 1, 2

Chasing the sunset down to Glen Nevis

Chasing the sunset down to Glen Nevis

Enjoyed that BP... Is decently steep that drop off the Aonach's - I can still remember it now and was a whisper over two years ago I did this route...

There is a small cairn that marks the top of the descent path but may have been covered in snow, and in any case there wouldn't have been a path...

Glad you got down safely and looks like a magic day... Great photos of what is one of my favourite parts of Scotland...

Here's a photo of my buddy topping out on the descent you chose to avoid... 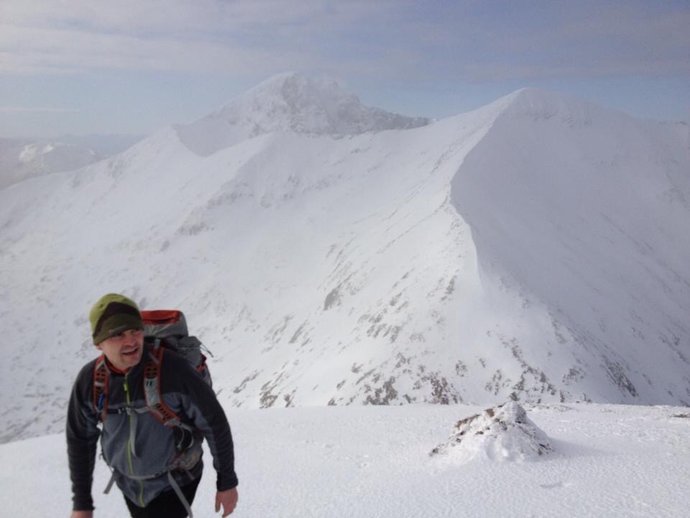 Many thanks again, everyone, for all lovely comments

and I hope my story didn't cause any cardiac arrests

We've done two more Munro circuit since, so I have some fresh memories to cover the scary ones

andrewdoggett wrote:There is a small cairn that marks the top of the descent path but may have been covered in snow, and in any case there wouldn't have been a path...

Yes it was covered in snow, there was still a thick layer of the white stuff on the summit plateau, we couldn't find the cairn, hard as we tried... The slope looked (an felt) just as bad everywhere, we attempted the descent in a few different spots along the AM ridge but it was just too dubious.

dogplodder wrote:Think if I did these two again by this route I'd do it clockwise since like you I prefer slippy steep slopes on the ascent.

Quite agree, going up even on a wet slope, it's easier to keep your balance

During our first attempt on these two, we actually went up Coire Guibhsachan, but didn't get as high as the step section. It was raining cats and dogs so we turned back.

Fantastic views and photos. Yes it is very steep down into Glen Ghiubasachan. I descended that way in summer (no snow) climbed back up to CMD along the arete to the Ben and back down beside the waterslide of the Allt Coire Eoghainn to the car park . A long day I seem to remember, but it was about 40 years ago - I guess I must have been quite fit then

Looks like the ideal balance of snow and bare land for photographs. To my eye at least!

That momentary "Oh no" moment in the hills in winter when you realise you may be in a spot of bother. But like you say, the important thing is calm but quick, decisive but reasoned action. All's well that ends well!

Nice one BP and Kevin, cracking day there. Probably a wise decision not to go down the steep slope to locate the gulley at 830m, I remember losing a whole bottle of juice when it dropped and slid rapidly all the way down the icy terrain.

Glad all worked out well.

Thanks for sharing that experience. Very helpful. The pics are beautiful and also show the serious edge to the Nevis Range. Congrats on keeping cool heads under pressure.