Monday, Monday, so good to me;
Monday morning, it was all I hoped it would be.

It was Monday morning, and the weather was looking good. Fantastic, in fact!

On top of that, it was also my last day off work and, after dropping the kids at school, I had the rest of the day to myself. My plans for a quick blast up Ben Rinnes were put on hold and I decided to make a longer day of it. I'd only managed a brief walk up and around Pressendye last week during my leave from work but, at last, I could get a proper outing today.

Where to go, where to go? Somewhere close enough to home (near Inverurie) to make the most of the daylight given I was starting a bit late. Considered Mount Keen, but something was drawing me towards to Lochnagar and the bonny banks of Loch Muick.

I've done Lochnagar before, quite some time ago, and really enjoyed it. Initial thought was to do the traditional round of five munros, but as I'd always wanted to visit the Dubh Loch, I instead settled on a walk along the side of Loch Muick, then up to the Dubh Loch before following the burn up from there and heading over to the Stuic and Carn a'Choire Bhoidheach, re-visiting Lochnagar and and descending back down the other side (with a cheeky side-portion of Meikle Pap thrown in for good measure). Et voilà... a route had been planned:

Kid's dispatched to school sharpish, and I was soon in my car making good progress to the Spittal of Glen Muick, where I arrived just after 10:15. A couple other groups were meeting up and setting off around the same time, but was pretty quiet on the whole. I was on my own, so a quick change into my boots and a double check I had all the essentials packed in my bag and I was off.

Chose to walk along the southeastern side of Loch Muick, on the narrower but more scenic side I'd say. The path, initially rising along the side of the Loch, gives some great views along the length of the loch. Still a little cloudy at this point, but I could tell that the sun was starting to burn away the light cloud cover. Looked like a cracker of a day lay ahead. 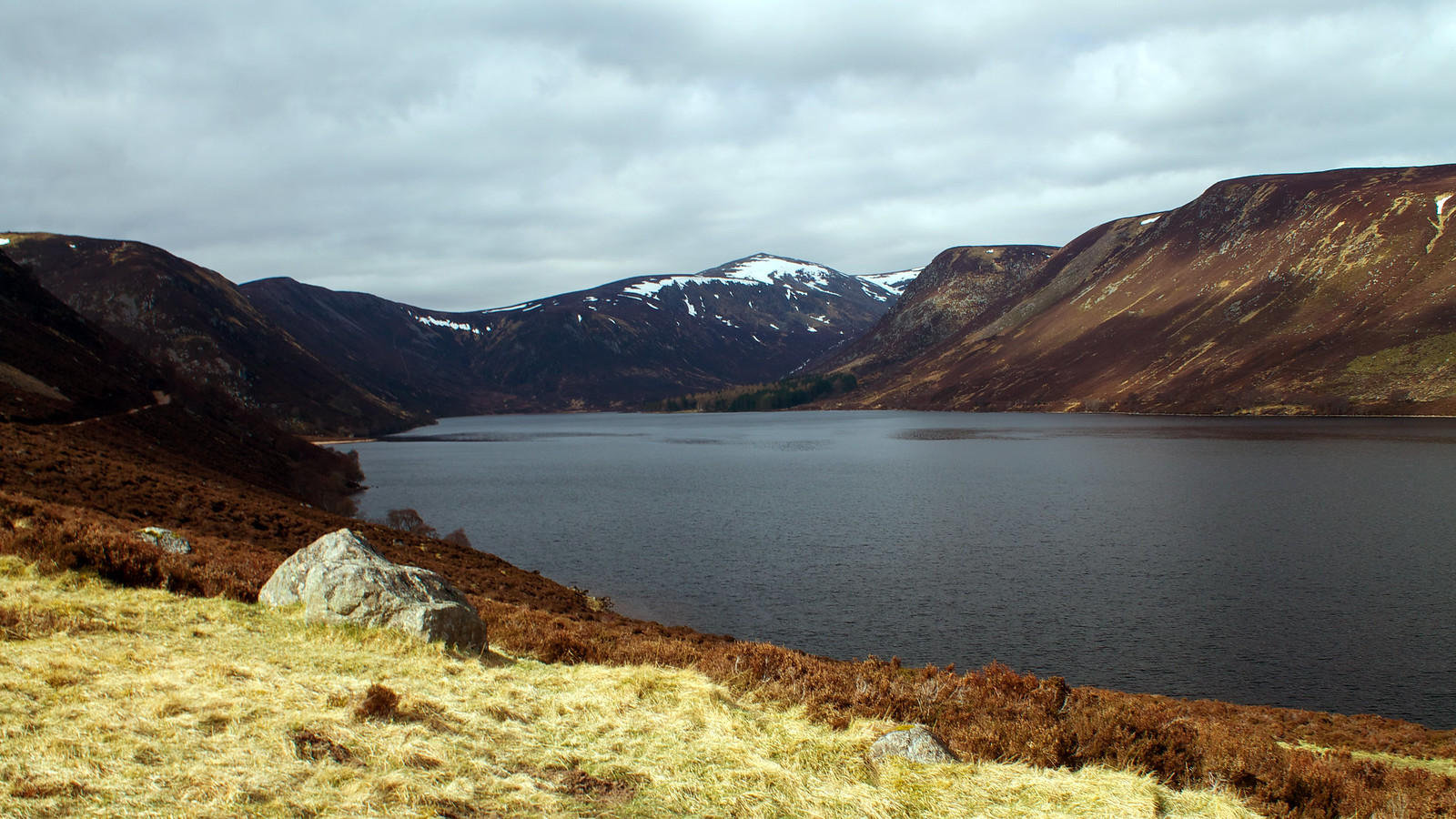 Looking up Loch Muick from the path on South of loch. 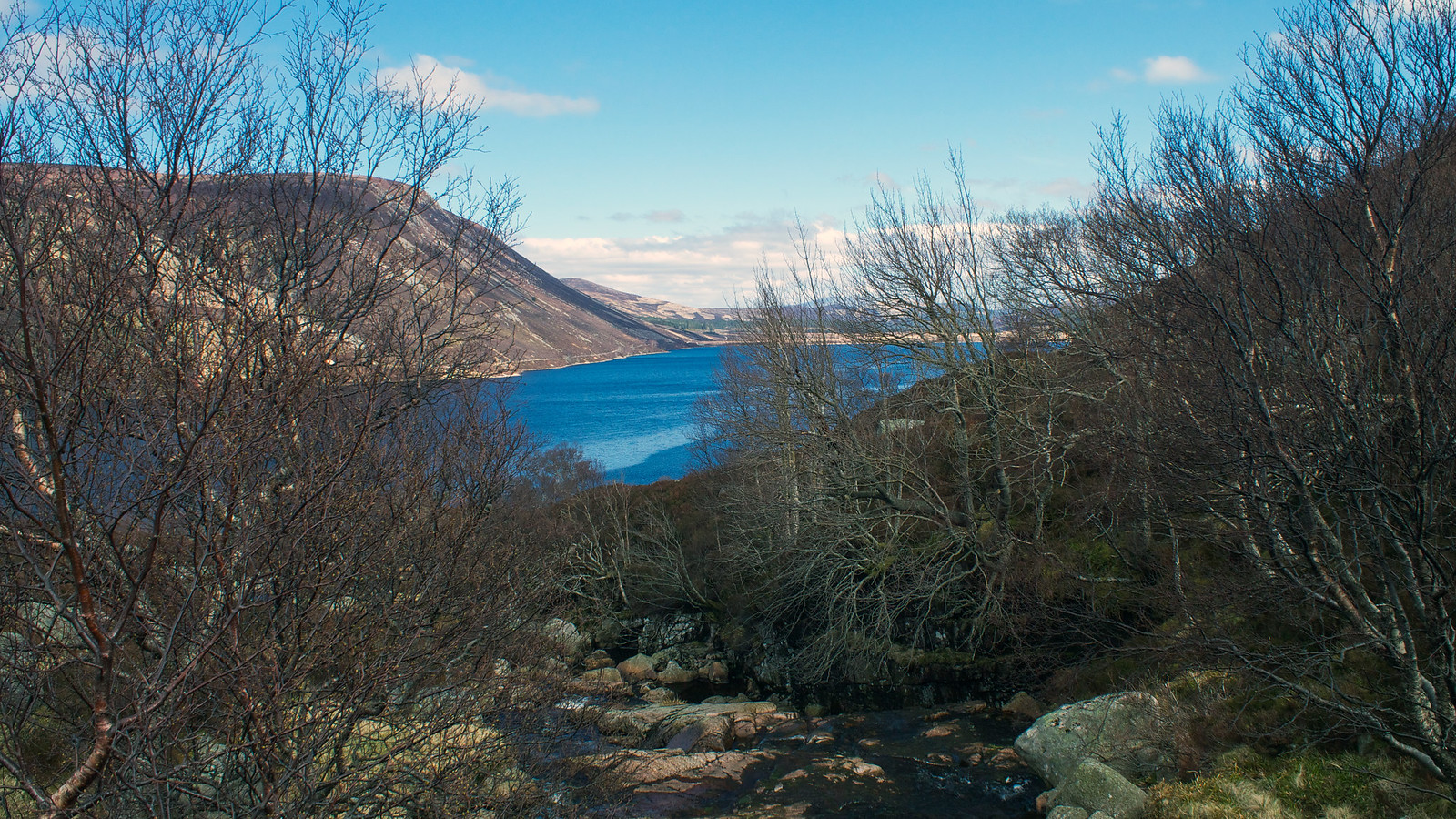 The walk along the loch seemed to pass in no time, certainly quicker than it felt last time I did the walk back down the other side after descending the waterfall path from Lochnagar. By the time I reached the head of the loch the skies were pretty much blue, with only a few small puffs or cloud hanging around. Stopped for a few moments to take in the sights and look back down the loch. A few others I'd seen in the car park were approaching on the path on the other side and took the path up to the Dubh Loch. 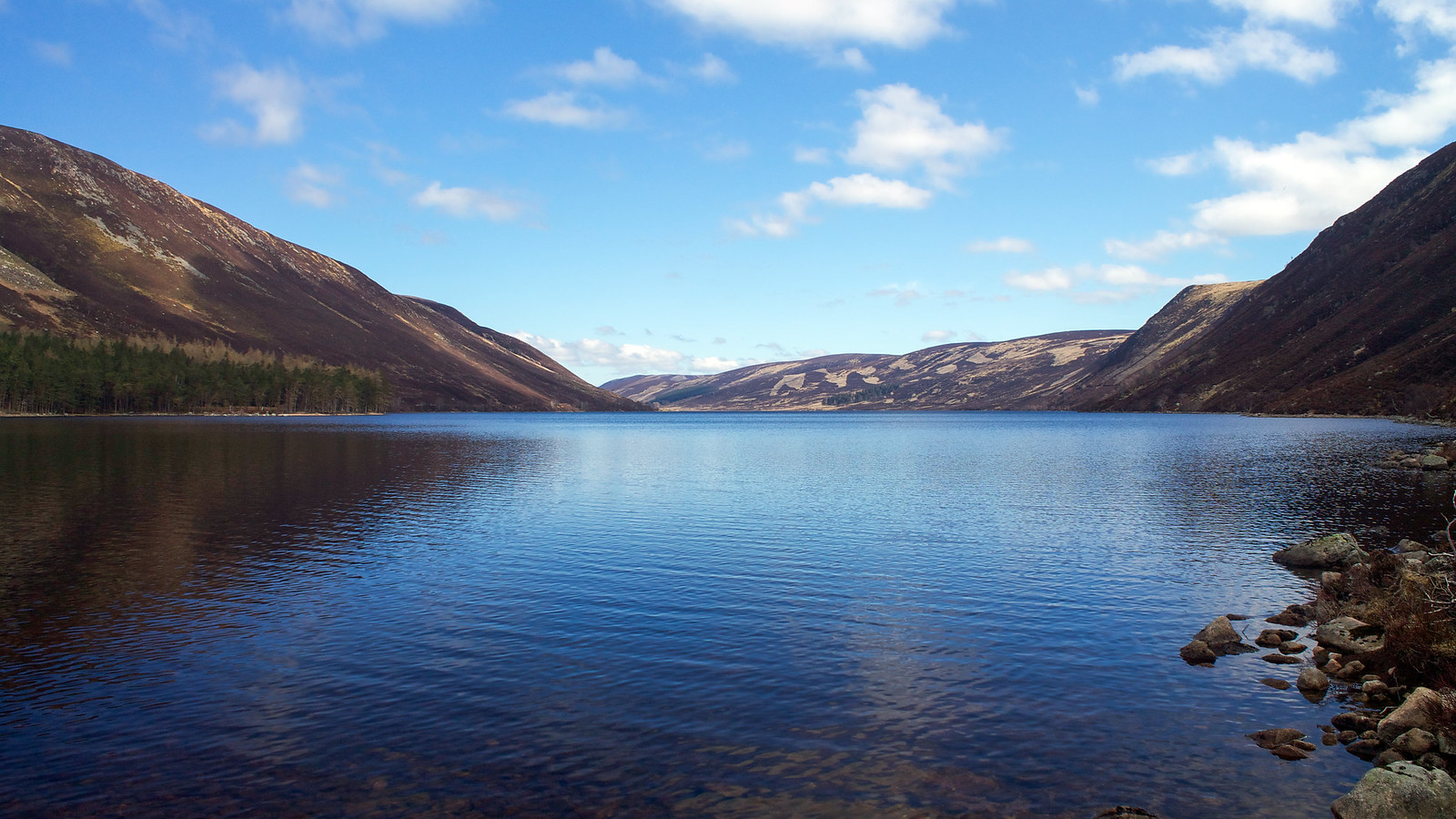 I was soon following the other group up the path to the Dubh Loch, and indeed soon passing them as they had stopped for a quick bite to eat. A quick hello and I continued on my way, planning my own lunch stop at the Dubh Loch itself. Turns out this section of path was only place I'd encounter any others up close today. Met another couple of chaps out a short walk when nearing the loch, but didn't see another soul on today's outing, other than the occasional figure way off in the distance. 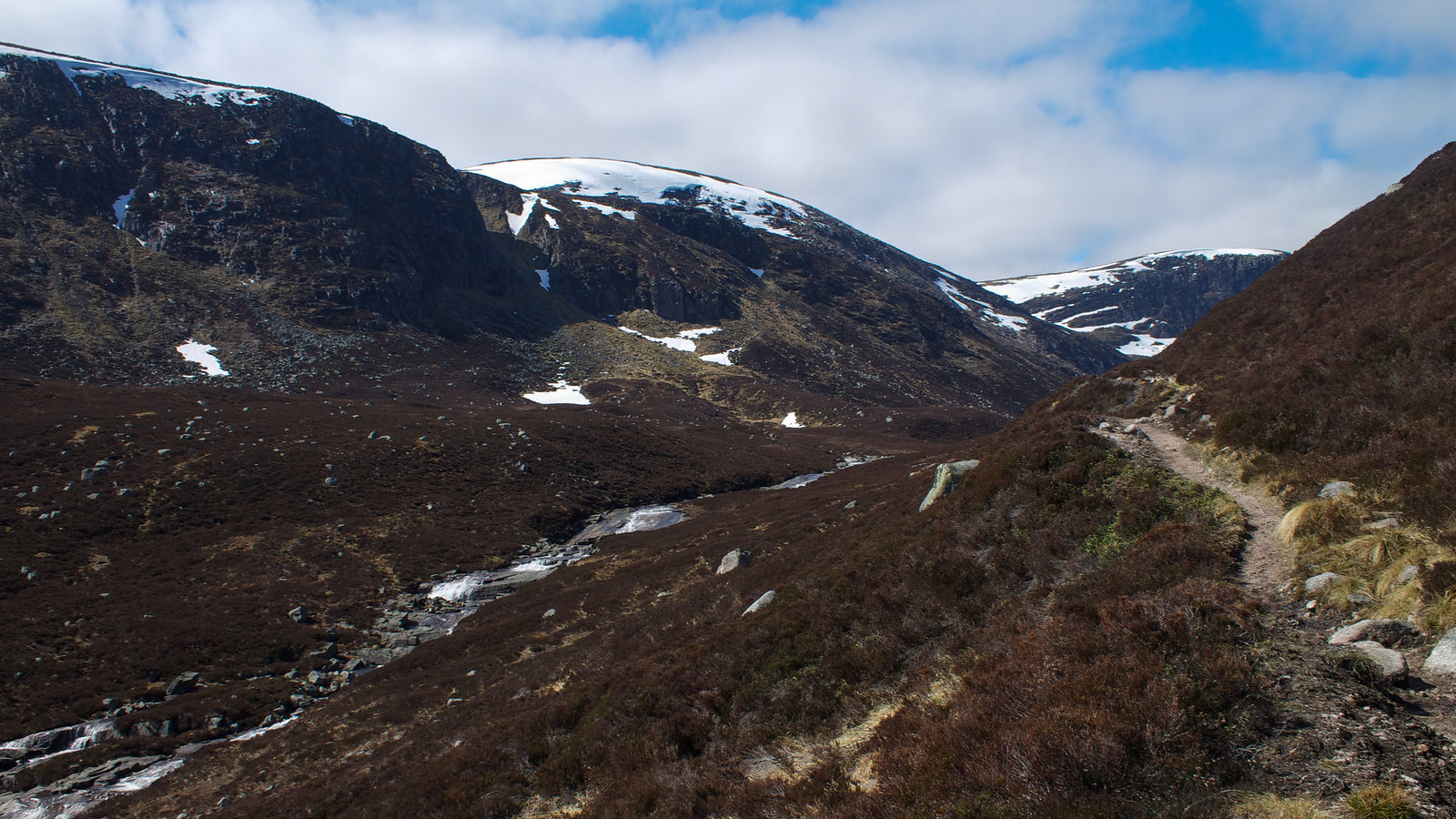 On the path from Loch Muick to the Dubh Loch 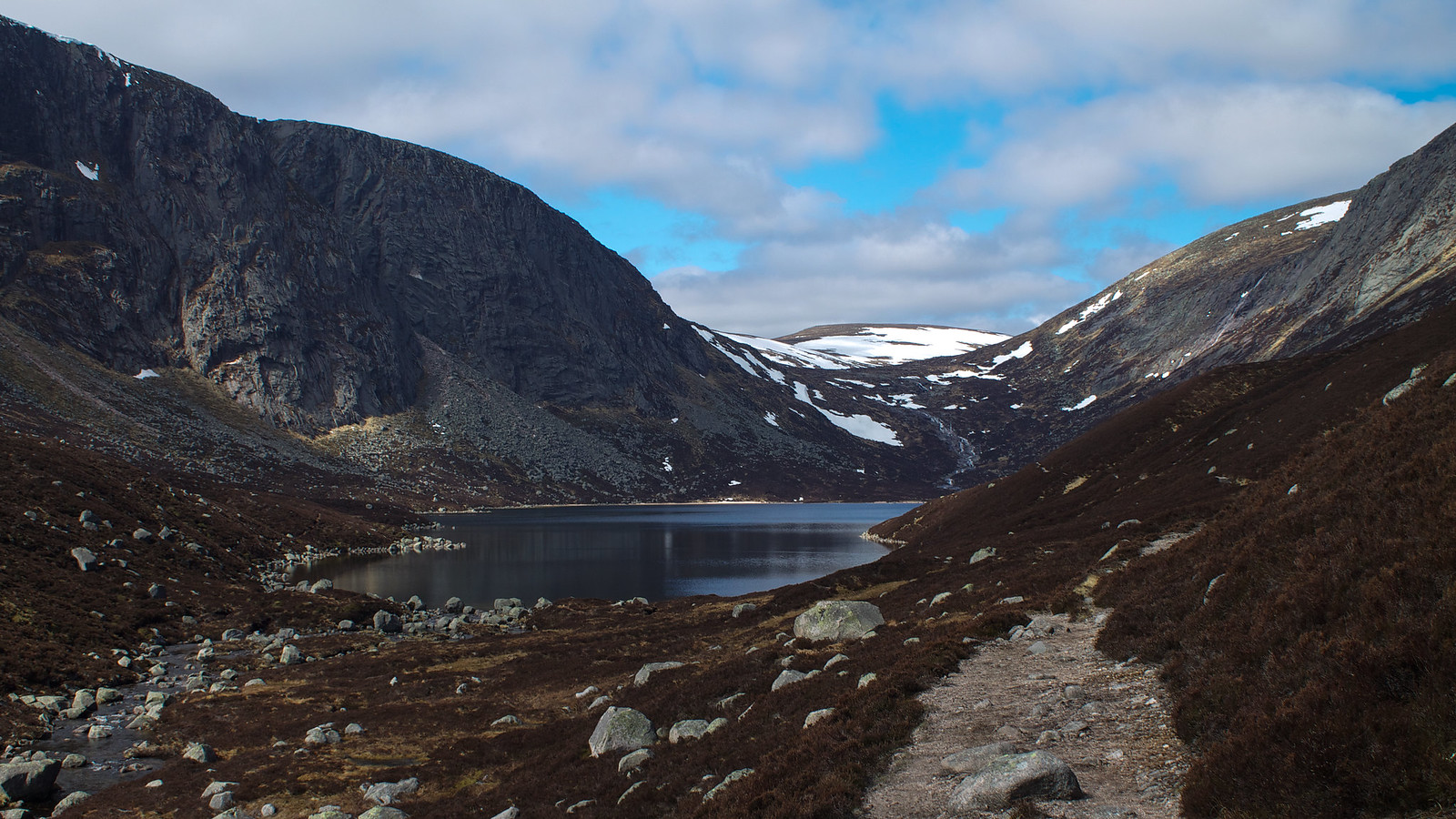 Eventually reached the Dubh Loch after an enjoyable walk along this stretch of path and was very pleased I opted for this route. I'd always wanted to visit this spot after reading about it in a guidebook years ago, and the place did not disappoint. Today, in the glorious sunshine, it felt like quite a heat trap. It was boggy going in some sections of the path along the side of the lochan, my leg disappearing up to my knee at one point. However, I soon had myself perched on a comfortable stone slightly up the bank overlooking the water and was tucking into some food. The group I had passed earlier soon caught up and plodded on by on their way. Other than that I had the whole place to myself. 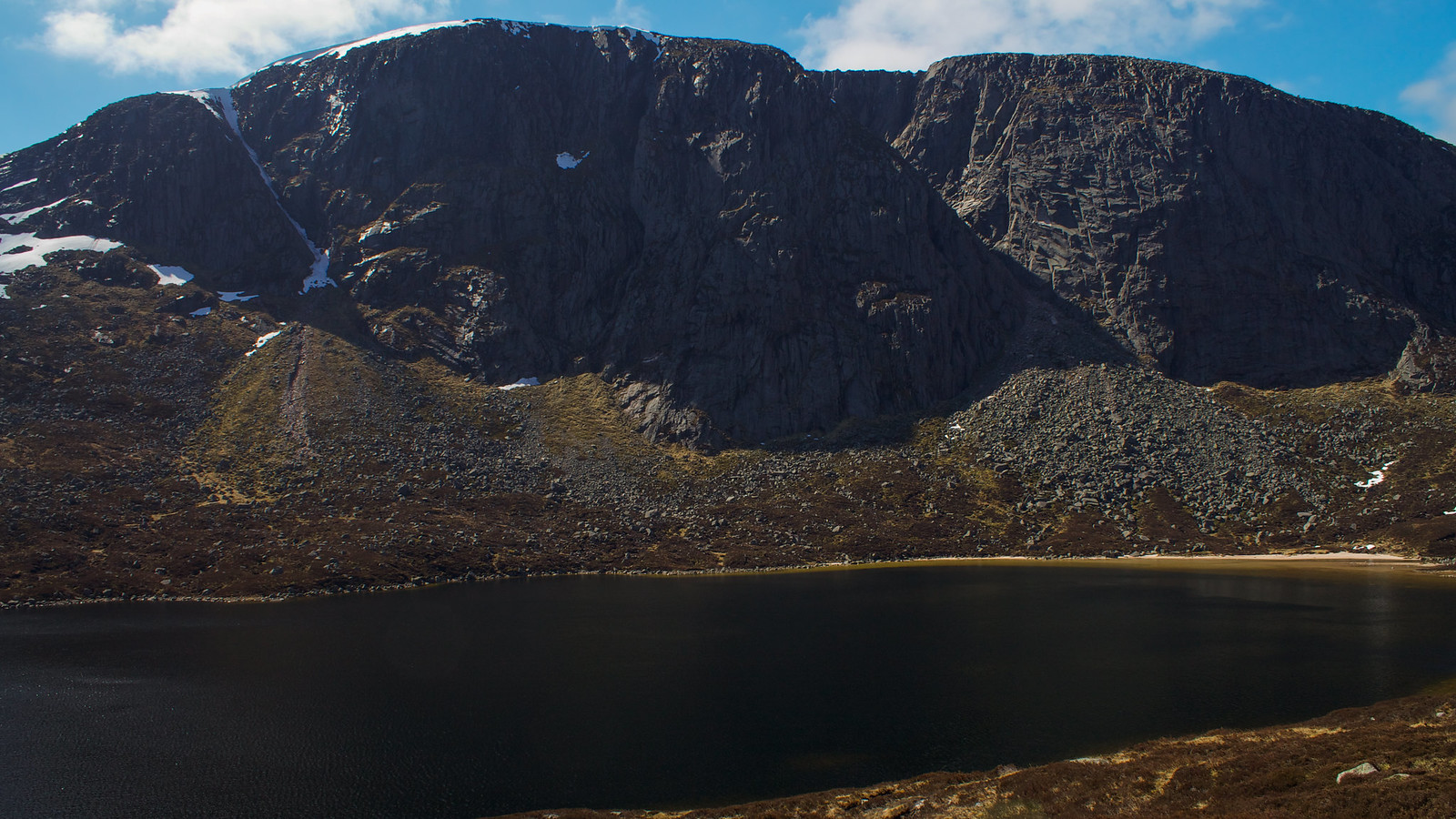 The view from my lunch spot

After lunch I wandered leisurely around the waterline for a short while before starting my ascent along the Allt an Dubh Loch.

From west of Dubh Loch

Dubh Loch from above

No marked path on this section, but it wasn't difficult to keep to the route, following the burn initially and later picking on an old fence line, which pretty much had a track going along it much of the way. A few thinning patches of snow around here, some with water flowing underneath. I carefully navigated my way around these. The climb up was pretty shallow and turning around to look down Glen Muick occasionally rewarded me with some great views.

Carn an t-Sagairt (Mor on the left, Beag on the right).

Soon enough I arrived on the path that runs around the top and found myself looking at Carn an t-Sagairt Mor, very tempted to take a little detour and go up there and bag another munro. If was I well ahead of my schedule I probably would have, but I was pretty much on time, so stuck with the original plan. Probably a wiser idea, and gives me the chance to explore that side anew another time.

So, it was right hand turn for me at this point, and next in my sights were the Stuic and Carn a'Choire Bhoidheach.

Looking across to Cairn Bannoch

Went for the Stuic first. What a great view from here; a cracking spot in fact. The view over to Lochnagar was great. Sat for a while here and had some coffee, sheltered beside a boulder out of the wind. It cemented the fact that it was definitely the right choice to come here today, marvelous! 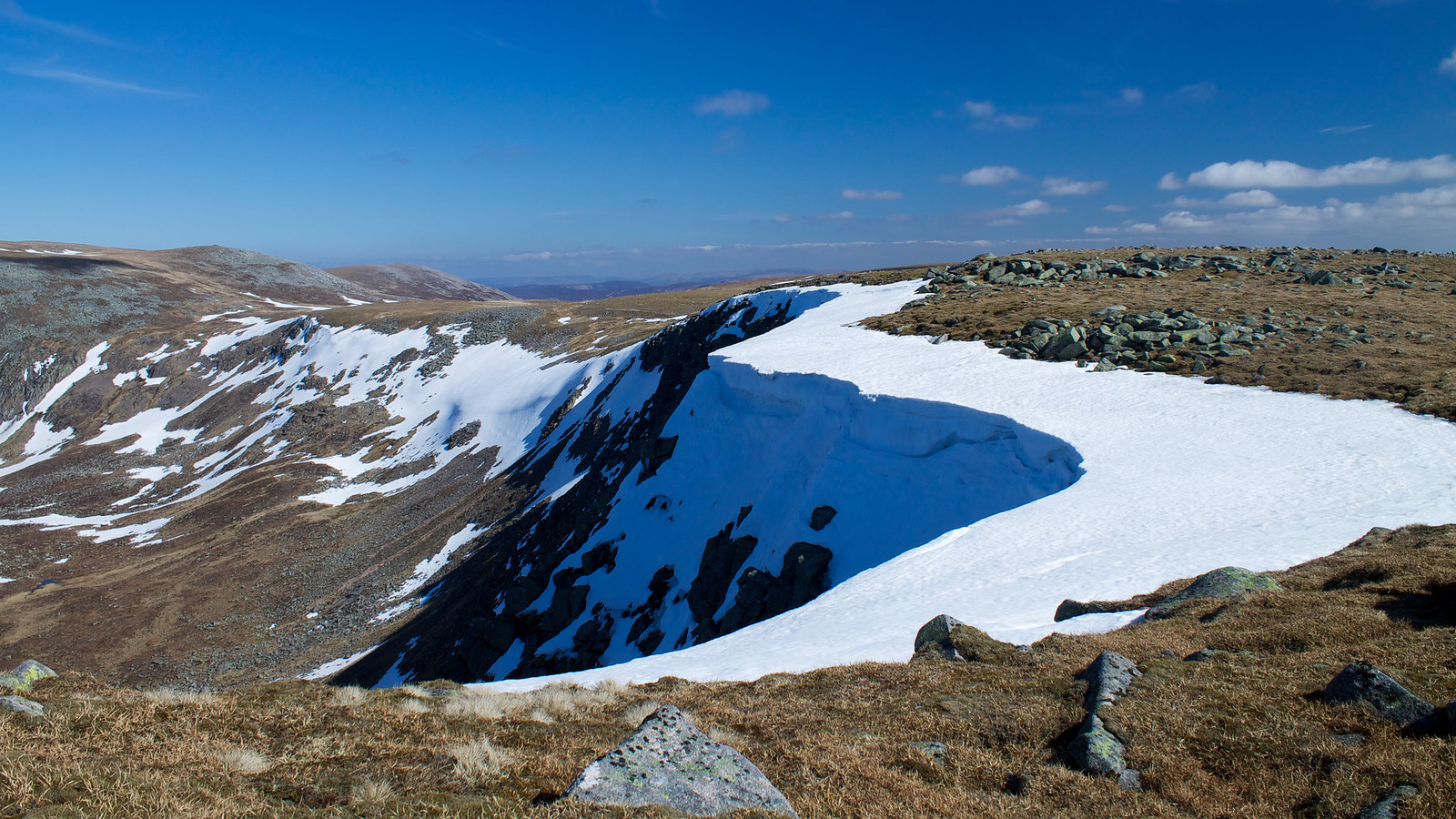 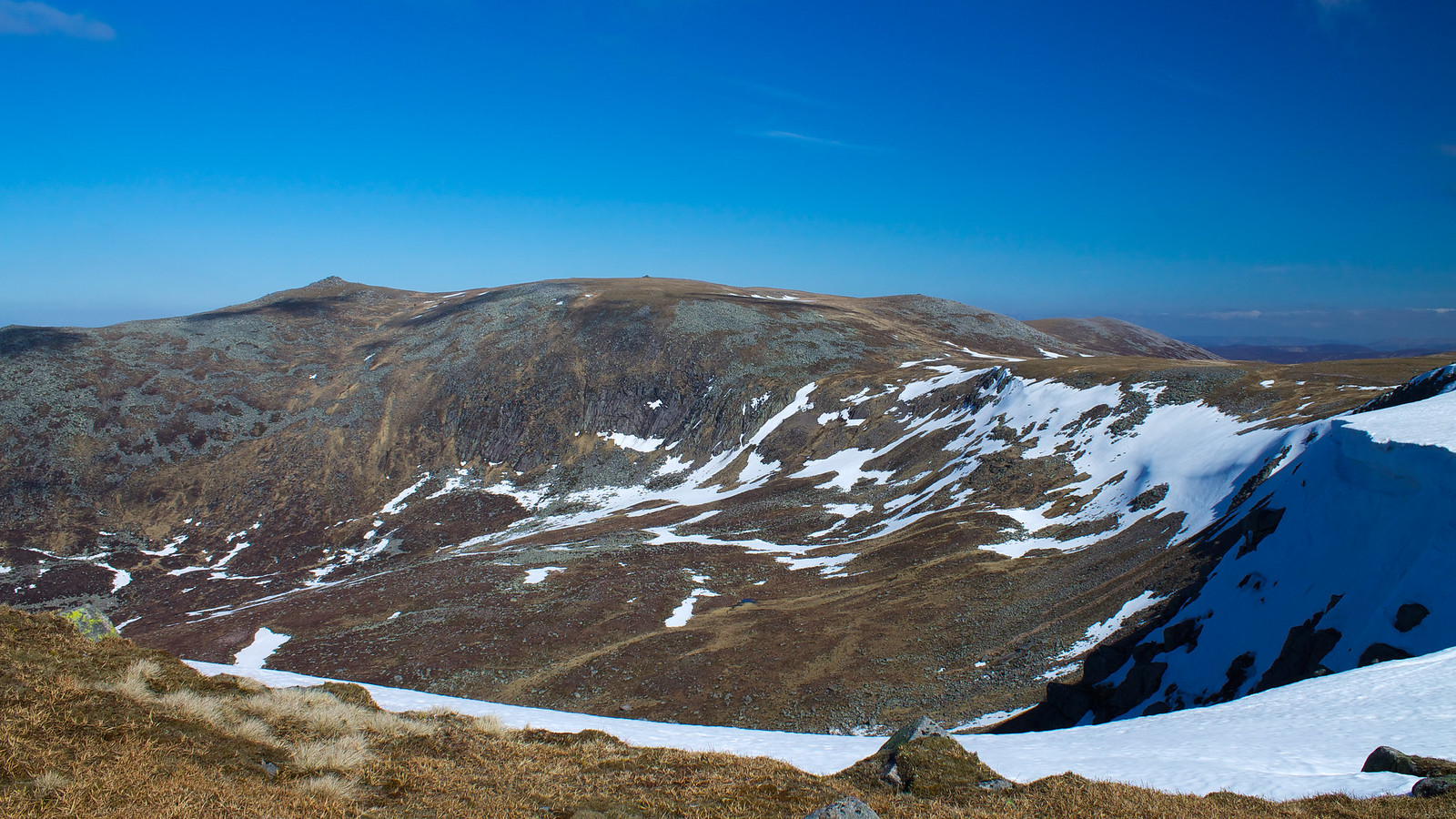 View from Stuic to Lochnagar 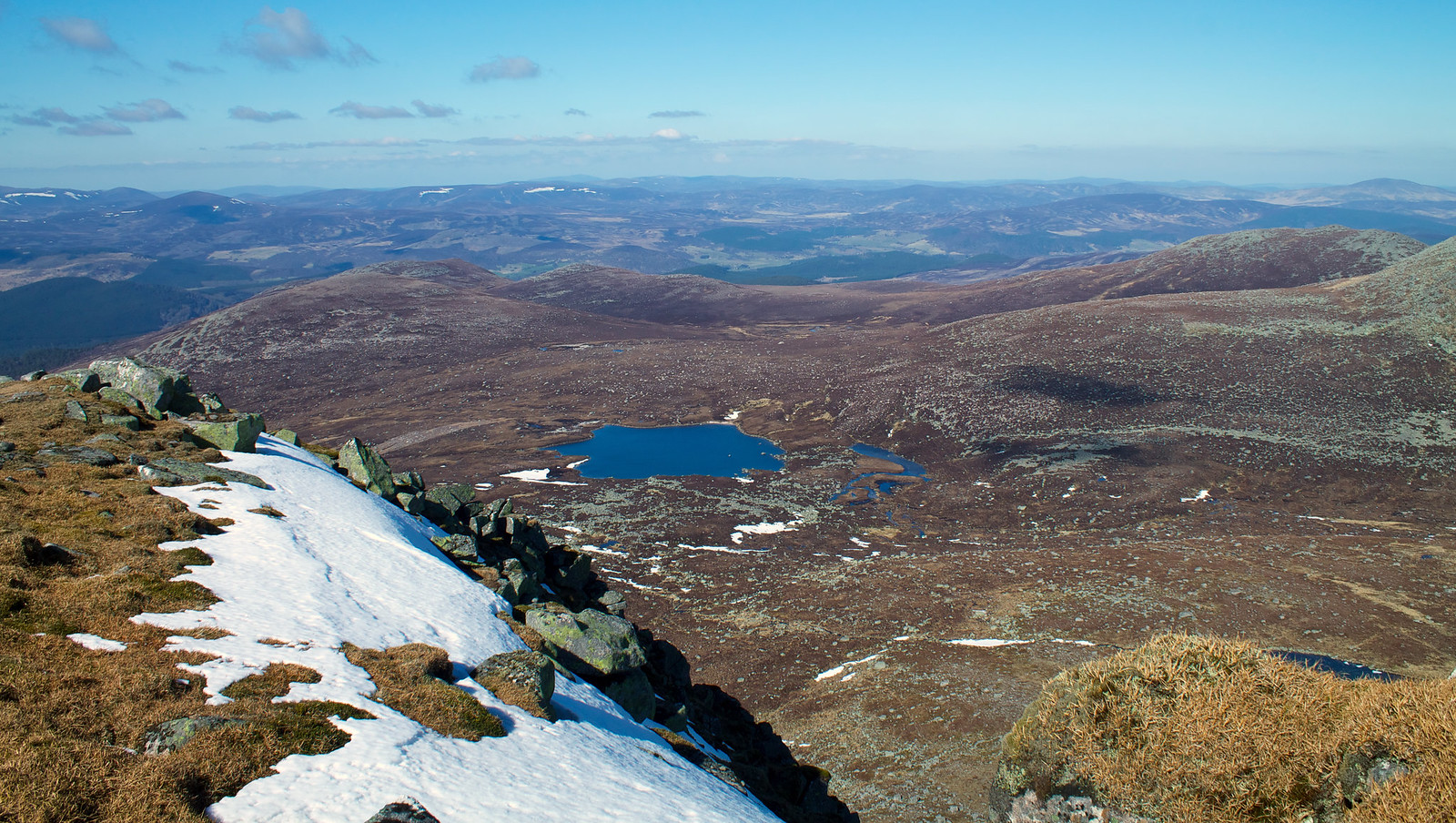 View of Sandy Loch from the Stuic

Next it was up to the summit of Carn a'Choire Bhoidheach. From the Stuic it didn't look a particularly fascinating summit and indeed, upon reaching there, I can't be the first to feel a little uninspired. The Stuic is definately the best stopping point on this part of the range. But at least that's another munro done! A couple of photos snapped, and I set off on my way to Lochnagar.

The walk over to Lochnagar was pretty straightforward, along the path and through a couple of patches of snow. Before I knew it I was climbing up the last section to Cac Carn Mor, which I did a slingshot past and headed straight for Cac Carn Beag. 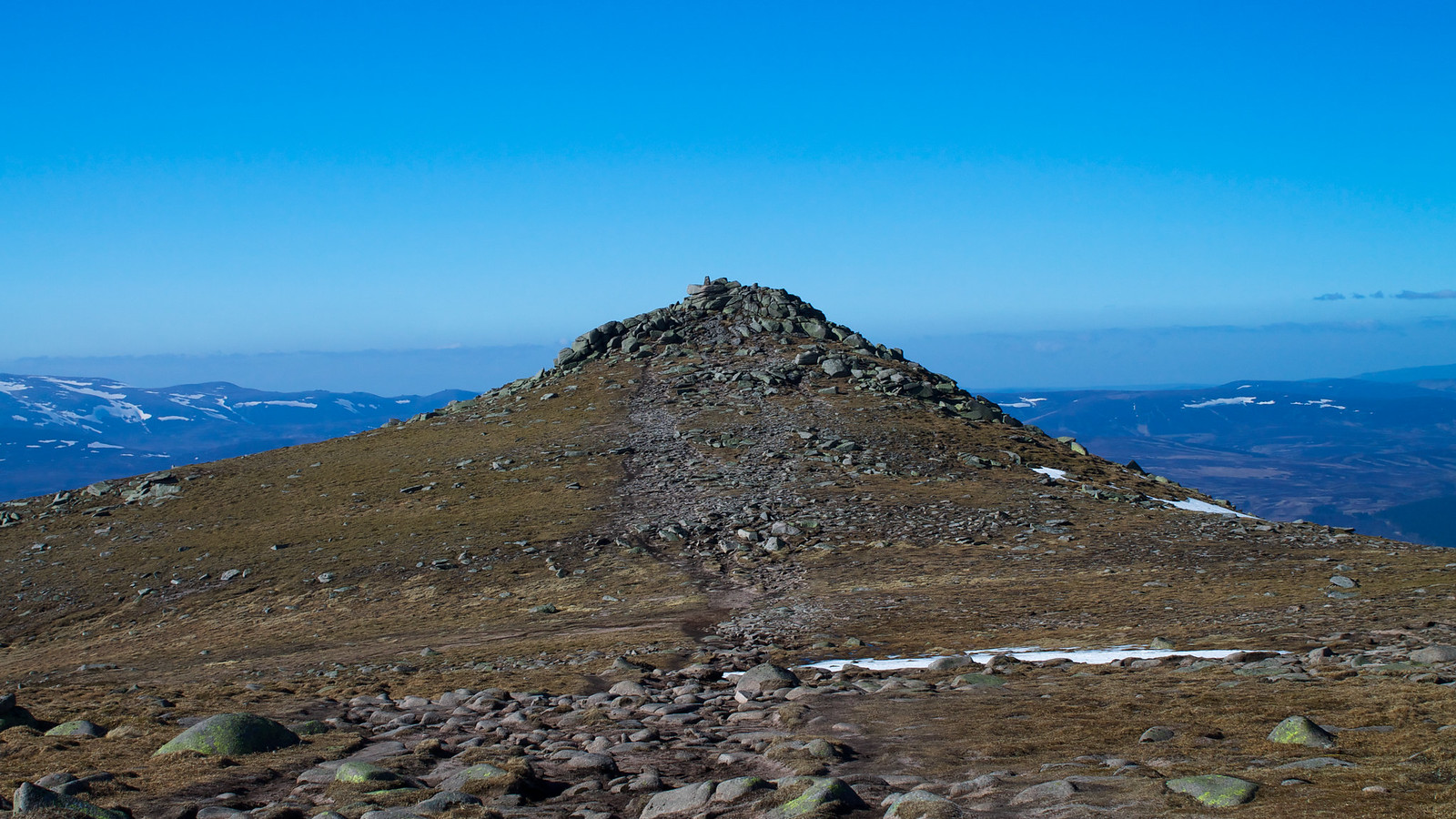 Again, I had the place all to myself here! I suppose that's the advantage of being here later in the day (it was now around 17:00). Last time here, a few years back, it was mightily busy with people clambering all over the rocks at the top. Today it was just me.

The breeze had picked up a bit now, but my face was glowing warm, reminding me that I really should've brought the sun cream along.

I stayed here for only a short time (enough to eat a Twix and admire the view for a few moments) before I set off again. I wanted to include Meikle Pap on the way back down, so didn't like to hang around too long. Also, I was too lazy to get the extra layers out of my bag and instead kept moving to keep warm.

View from Cac Carn Beag to the Stuic

Plodded back over towards the staircase, and started the descent down towards Meikle Pap. I must say, I found the staircase more challenging to walk down that I did to walk up it last time I was here, going in the other direction. Legs must be starting to tire a bit now. At the bottom I made a beeline over to Meikle Pap and was actually glad to be walking uphill again.

The sun was starting to get a bit lower by now, and the wind getting colder so I just did a quick jaunt up to admire the view of Lochnagar after hearing so many times that the scale of Lochnagar is best appreciated from here (which it certainly is). So, just a short stop to take in the last of the views, before getting my head down and marching back down to Glen Muick. 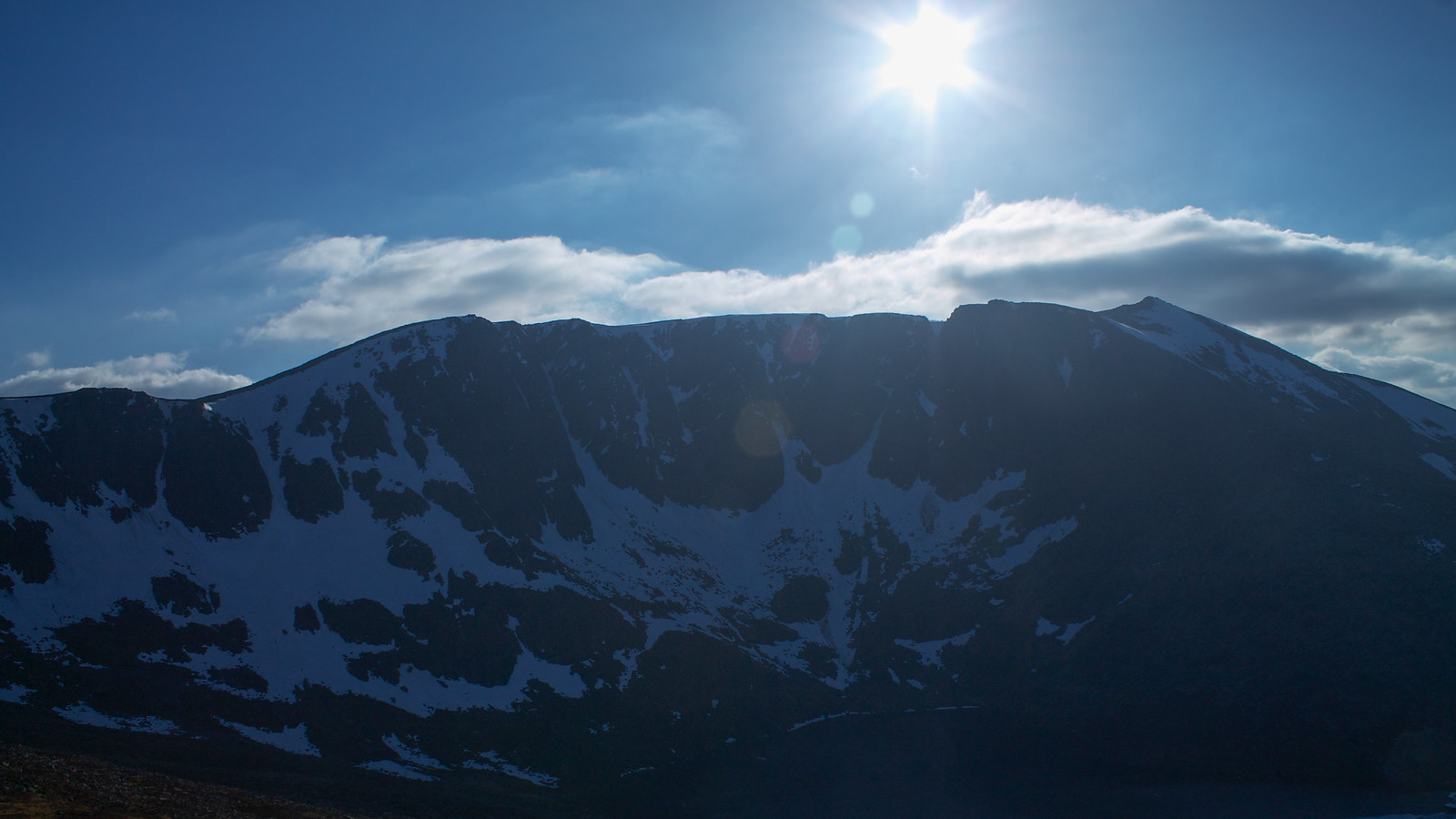 The sun over Lochnager, from Meikle Pap

Back to the car around 19:30... so just a tad over nine hours in the hills today. Only two cars left in the car park by this time. Boots off, jacket off, bag dumped in the boot and after one final snack I was off on my way home, refreshed and elated after a stunningly great walk.

To top things off, they were playing some great music on the radio, so volume turned up as I drove off into the sunset.

Don't get many Monday's this good!

Re: Sunny Monday: Lochnagar and The Stuic via the Dubh Loch

Ooo lovely! I must try the route up to Dubh Loch some time, it looks great.
Your account brings back good memories of sitting at The Stuic enjoying the views. What a special place that is. Thanks for posting.