Good weather in May was proving hard to come by, so when a small window of opportunity came along, Big Jesper and Jimbo, quickly made plans to head for Carn na Caim and A' Bhuidheanach Beag, just south of Dalwhinnie. Usual early start about half five a.m., and think it took us about 2hrs 20m, to get there, via back roads from Kenmore, after a wee stop in Inveraray for a photo of interest for me. We weren't expecting the most dramatic of hikes and don't think we were disappointed on that score, though as always, there are moments, places, sights to enjoy, or marvel at. One marvel is the track up the hill which leads more or, less to the plateau. Even I can't get lost on a road/track like this. As mentioned the 'disused quarry' isn't very distinctive, but obvious enough when not covered in snow. Reaching the top took just under the hour, then it is a toss of the coin; heads, or tails, for left or, right? We headed left for Carn na Caim, where the track remains pretty level and quite solid much of the way, before beginning to fade and bifurcate here and there. Very easy going but, on a foggy day would be very easy to lose one's way up here, unless your navigation is spot on. About half hour later we were at the cairn. It gave us a distant look at Meall Chuaich and some more distant, snow topped hills, but nothing too spectacular. Being a bit chilly for May, we didn't linger long and retraced our steps south, where the track continues towards A'Buidheanach, where we passed a large bank of snow, which caught our attention, for a closer look on the way back, perhaps.
At the cairn here, a small pebble 'arrow' directs one left, or south eastwards, to follow the best route, across and down into a hollow, before ascending up to A'Buidheanach Mhor, on the plateau once more, leaving one guessing where the top may actually be, as the eye searches for anything resembling a summit, although the top is only a few hundred yards away. Took us an hour and ten, of not very yard work, to get to A'Buidheanach Bheag from Carn na Caim. At least now there were better views to the Drumochter four, Ben Alder, Scheihallion and hills to the west. Again, we didn't loiter long and made our way back, where I just had to take a closer look at the bank of snow, at where I think is marked Coire Bhotie, on the map? Reminded me of the massive sand dunes we used to play on as a boy, in North Uist! 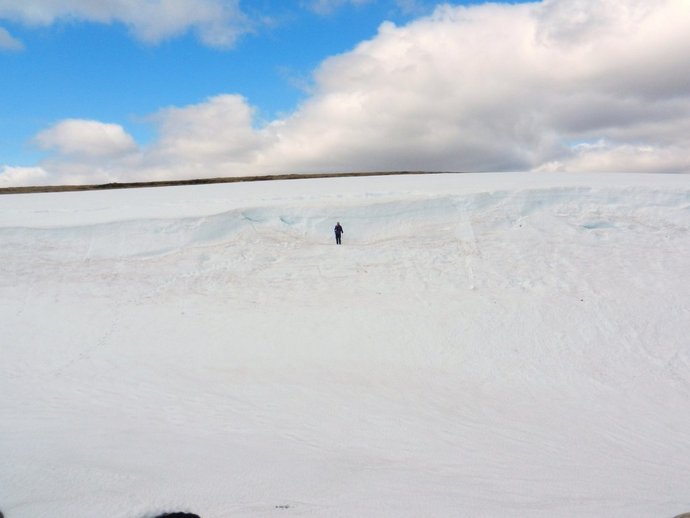 It's big - but, not as steep as it maybe looks. Looking over the snow bank, to Sgairneach Mhor and A'Mharconaich.

Briefly met another walker here, as we returned to the downward track, where we could admire the view of Dalwhinnie, Loch Ericht - and miles of massive pylons and wires, before getting back to the car in 4hrs, 20m. 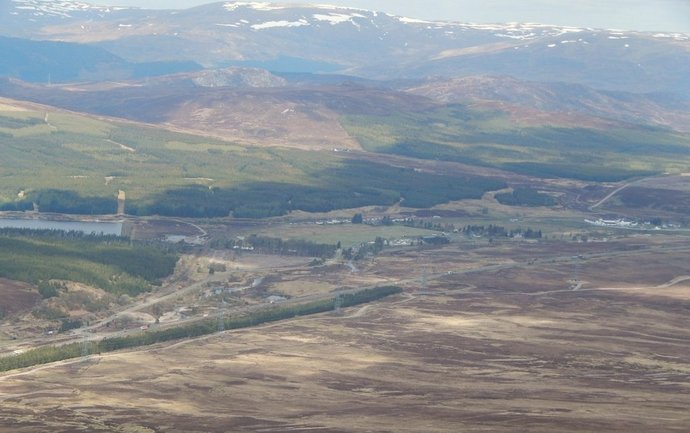 Not the most spectacular of days, but we were glad to have done it on a relatively clear day. The alternative would have much interesting, for those who like a navigation challenge! 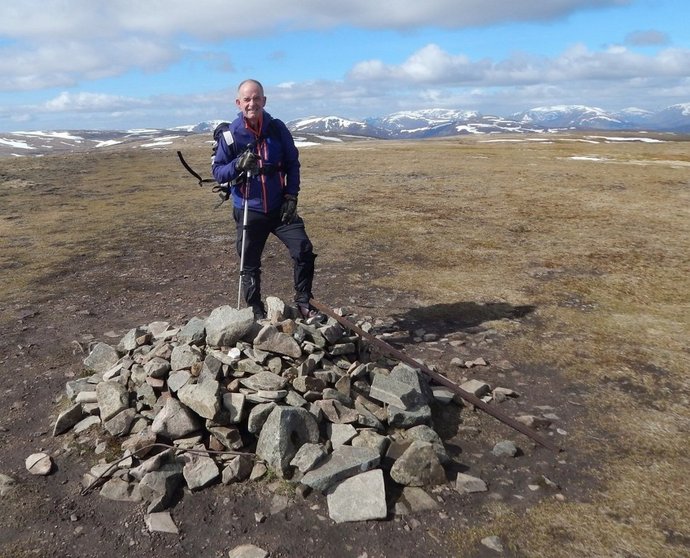 yeah maybe not the best hill, but still an enjoyable day with good views.

Big Jesper wrote:yeah maybe not the best hill, but still an enjoyable day with good views.

Yeh, good hike for four n half hours. Wish it had only been a bit clearer to west, but just glad it wasn't foggy!

Cripes that's some snow still for these hills, great day there

Ahh, finished the report!
That's some amount of snow left up there. You got a nice day for it

jac the lassie wrote:Ahh, finished the report!
That's some amount of snow left up there. You got a nice day for it

Aha, Jac, was just gonna get back to you, to say, job done, correctly now. What a wally, eh. I looked to find way to delete that post, but couldn't find one. I'm sure there must be a way. Anyway, sorted now. When you coming over this way again? I was gonna head for Buachaille Etive Beag tomorrow, with a novice, but cancelled as it's looking foggy. Maybe give you a shout again someday, as need to get An Stuc done, too. Well impressed with your Starav hike, by the way

spiderwebb wrote:Cripes that's some snow still for these hills, great day there

Thanks Spiderwebb, yeh good hidey holes, filled with snow and could last a bit yet, I'd imagine. As I said, there's always something to remember about most walks, even the duller ones, don't you agree?