Edited to now include photos

The start was a little confusing, There was a big fence across the start to the route which is a track almost opposite the phone box. The sign directs you past the lint mill. Not knowing the area (or even what a lint mill is

) I was stuck, but met a helpful guy who pointed me through a gate about 10m further down the road which turned into a path that quickly joined the original route.

At the end of the woods, you meet a massive load of diggers and trucks working on an irrigation project. There are signs directing you to follow a diversion, which I dutifully did, only to find that it was sending me up the wrong side of the river and round the horseshoe the wrong way. After an initial panic that all my bearings would be wrong, I realised that the weather was so good that I was unlikely to be unable to see and continued rather than walk all the way back down. It is definitely worth noting though, for anyone walking in less good conditions (and very bad of them to divert people without a warning about the route change

The climb up to Creag Mhor is steep but otherwise unchallenging. The path is clear (although it turns right just before a false summit which I took - I'd advise ignoring this turning and continuing on, much easier walking!) 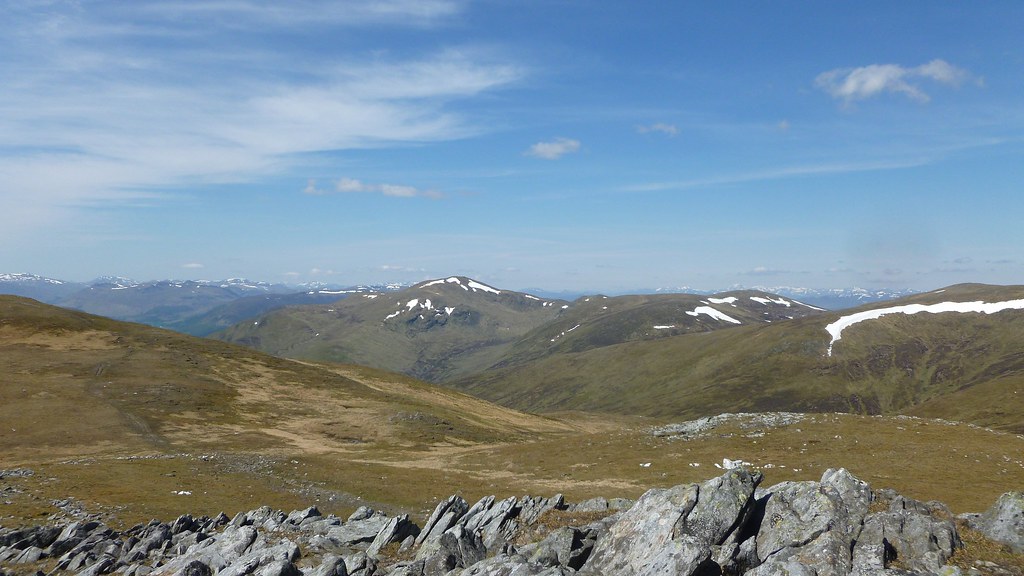 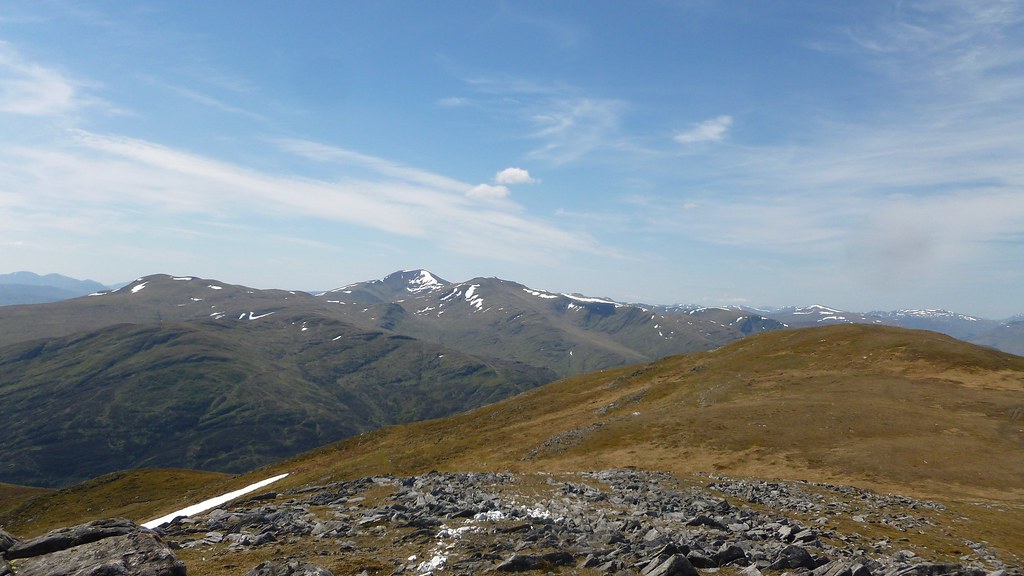 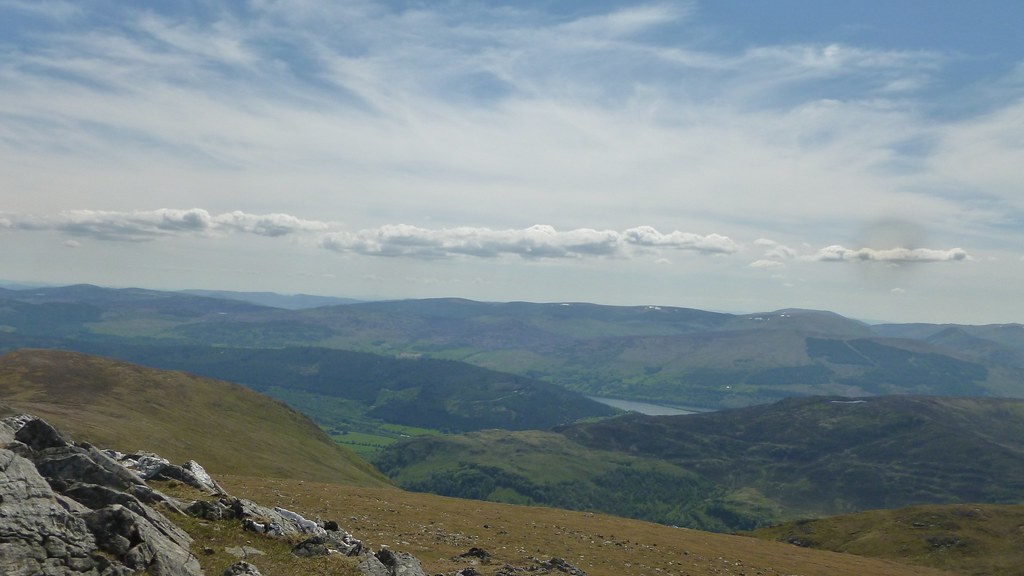 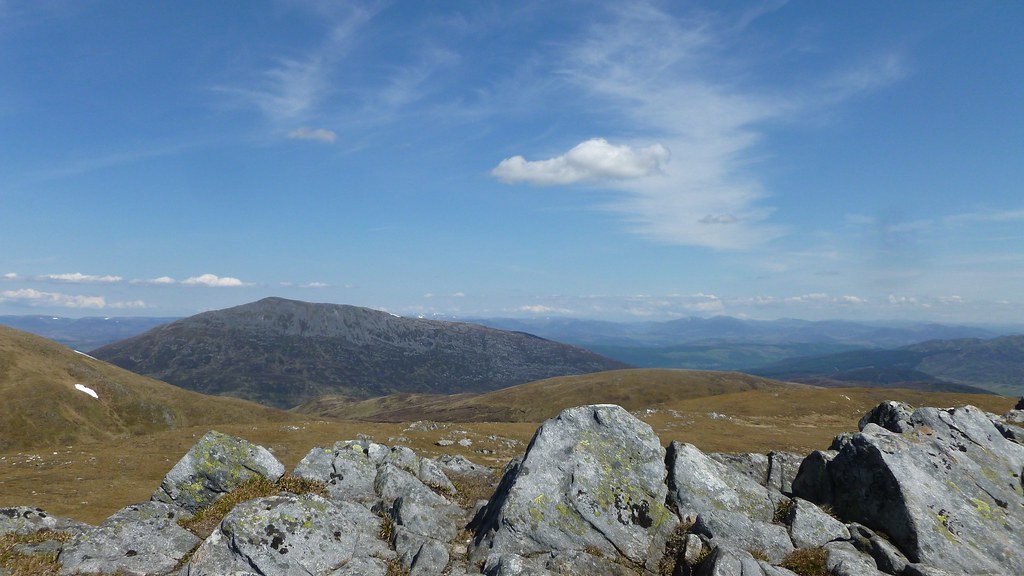 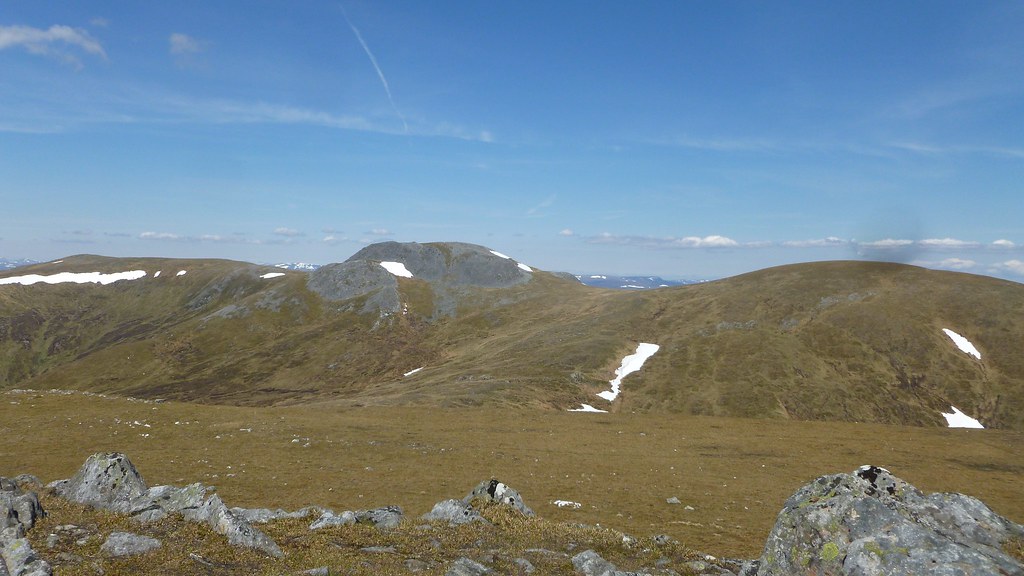 From the top of Creag Mhor you walk back on yourself a short distance before following the path down into a wide coll and heading up the hillside of Carn Mairg. Here you can either head for the ridge and follow it up more gently to the summit, or head directly up the steep rocky side of the mountain. There is a clearly visible path but very very steep. I felt I'd earned a sandwich after that! 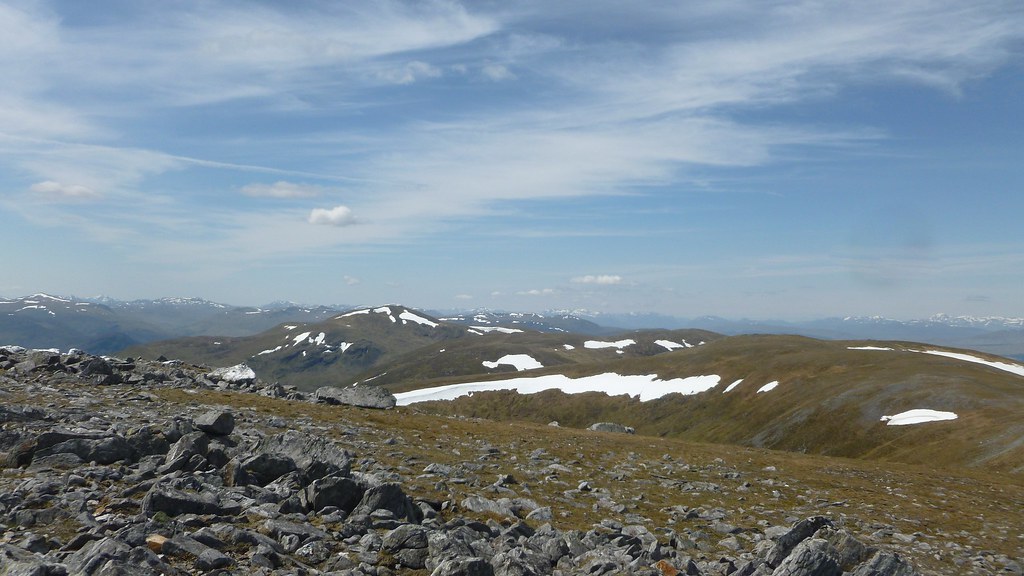 The long walk over Meall a'Bharr 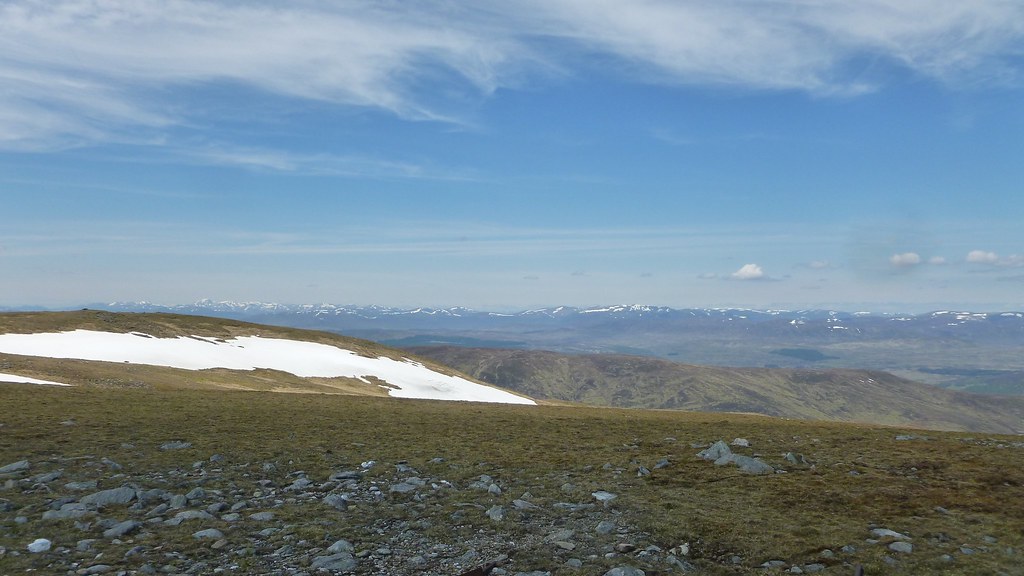 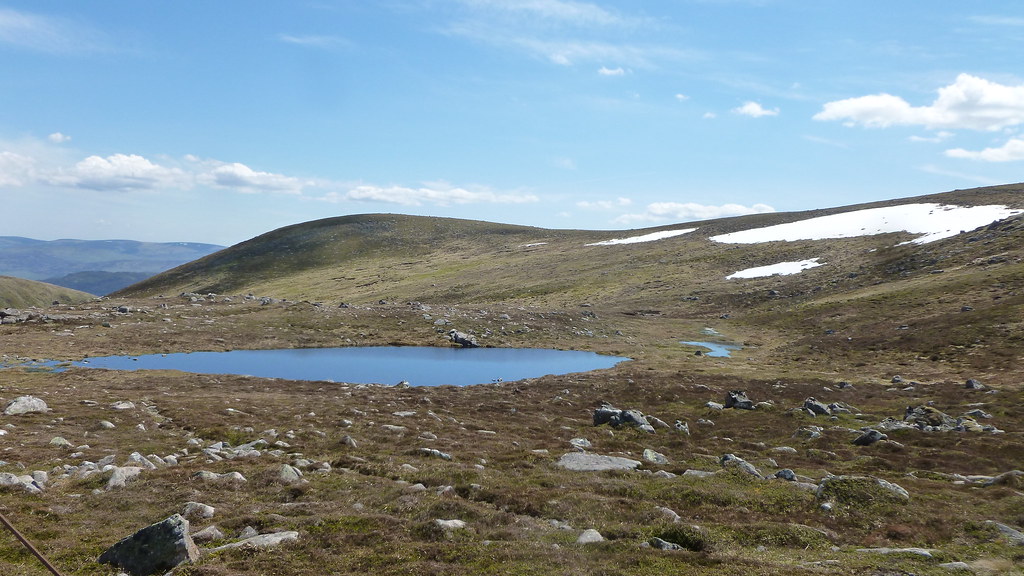 From here you follow a the long ridge over Meall a' Bharr following the fence posts all the way. You get a great view of Schiehallion from an unusual angle. It finally descends down to a wee puddle of water (probably bigger in wetter seasons) From there is a fairly steep straight climb up to the summit of Meall Garb. You'll definitely know you're there by the very unique metal 'artwork'! 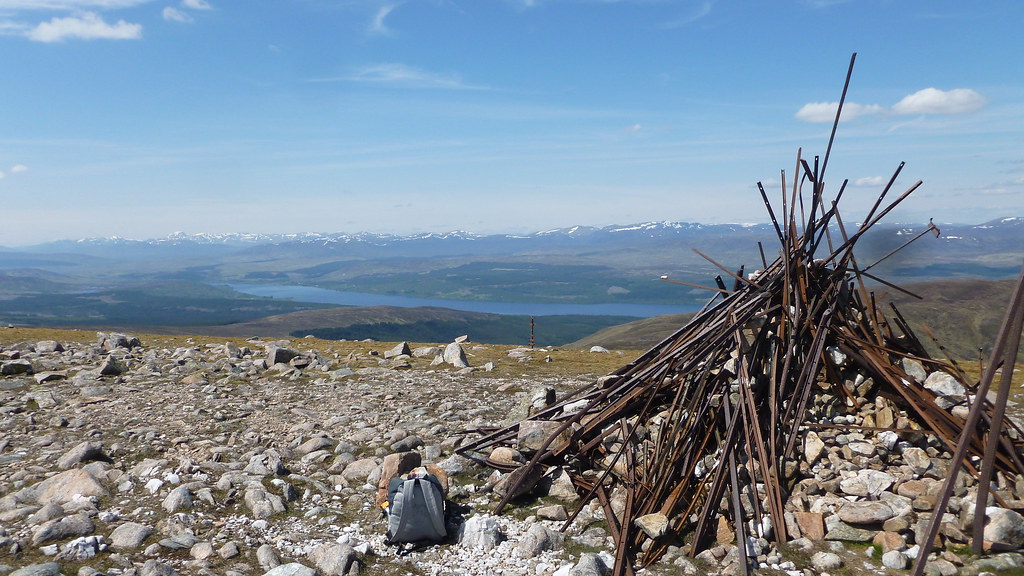 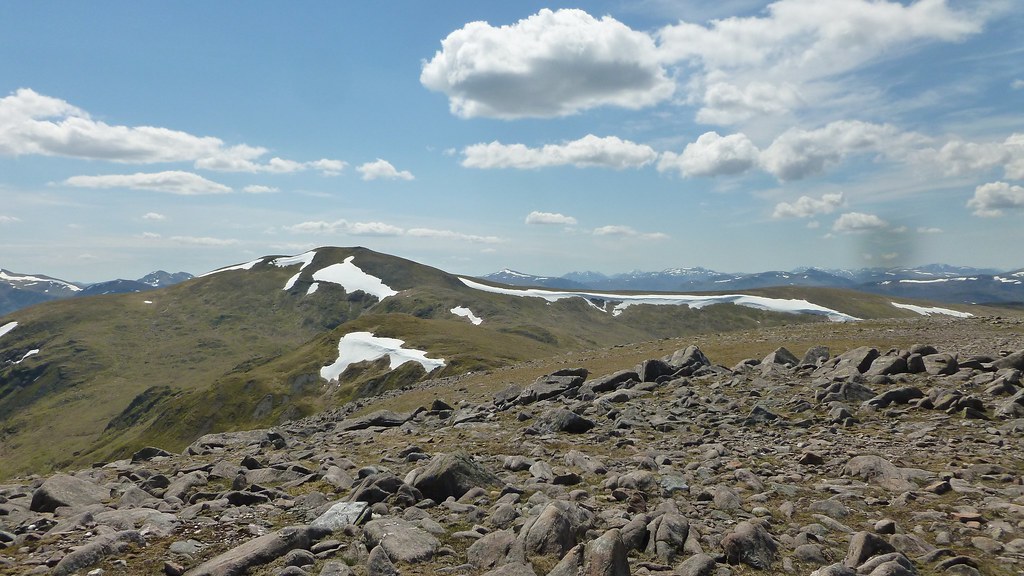 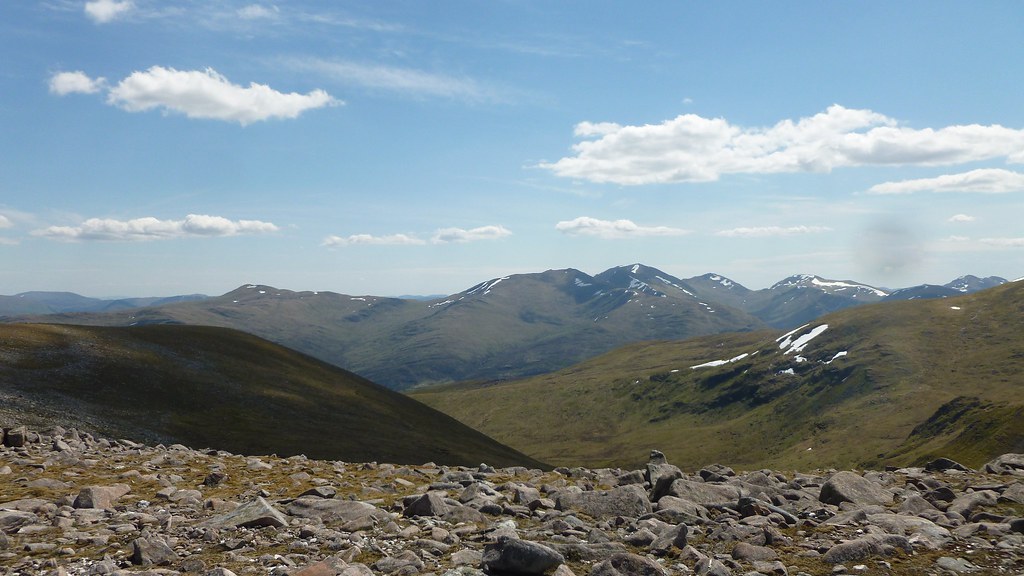 From there is a fairly steep descent then the accent back up to Carn Gorm starts. You can either follow the path that bears right to take the easy route, or follow the path that takes you over 2 extra wee hillocks (one of which is An Sgorr - I wasn't sure which was which so went over both!) The final stretch up to the top is steep and rocky, and as the final of 4 munros and feeling very dehydrated and hot this was very hard work! But totally worth it, for a warm and squashed sandwich and an amazing view of my whole route (as well as most of Scotland) was my reward. 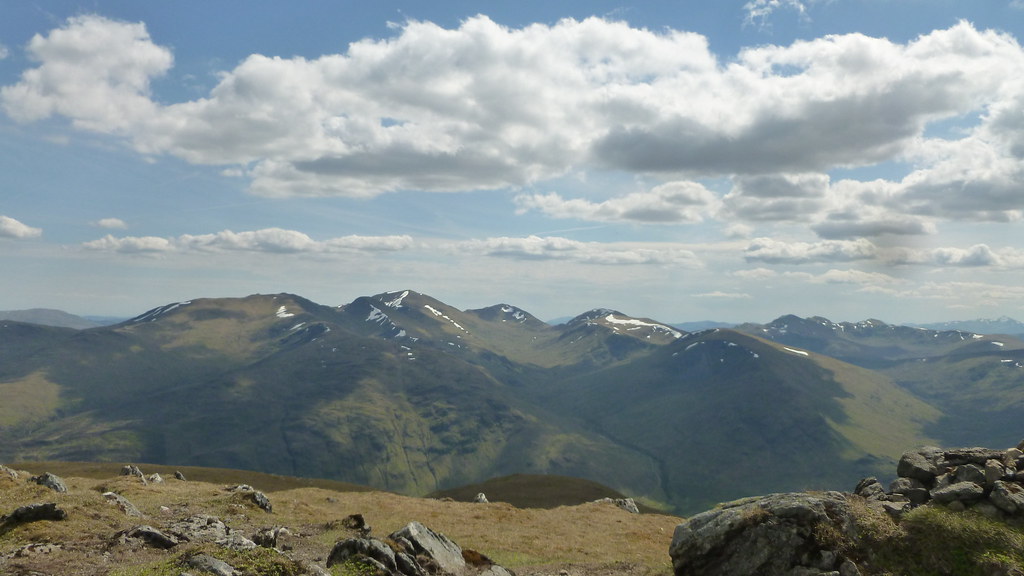 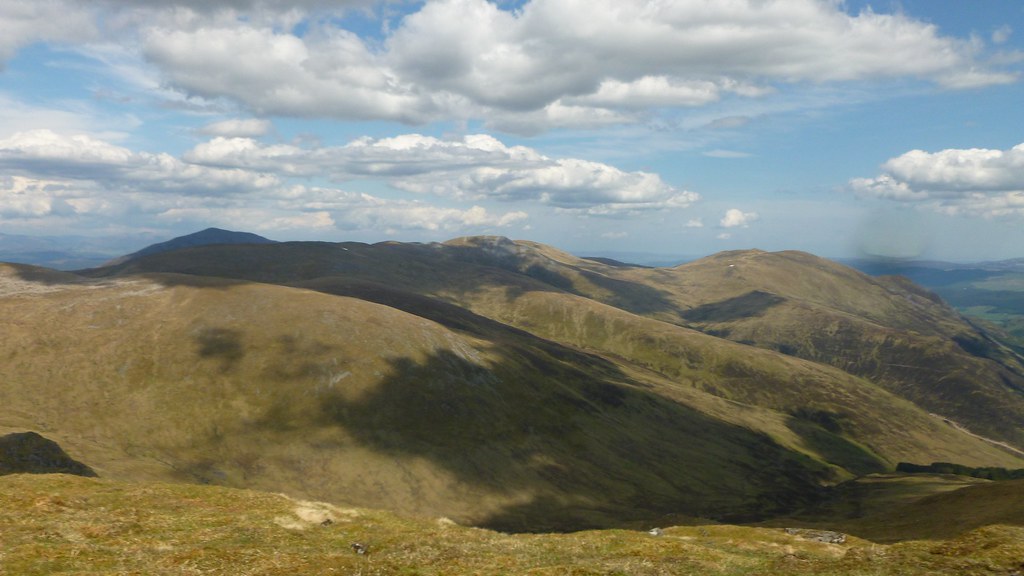 The path home from here was long and steep but not difficult to find. Apart from having to make my way across an expanse of snow (in June!!) it was a simple walk down to the river. 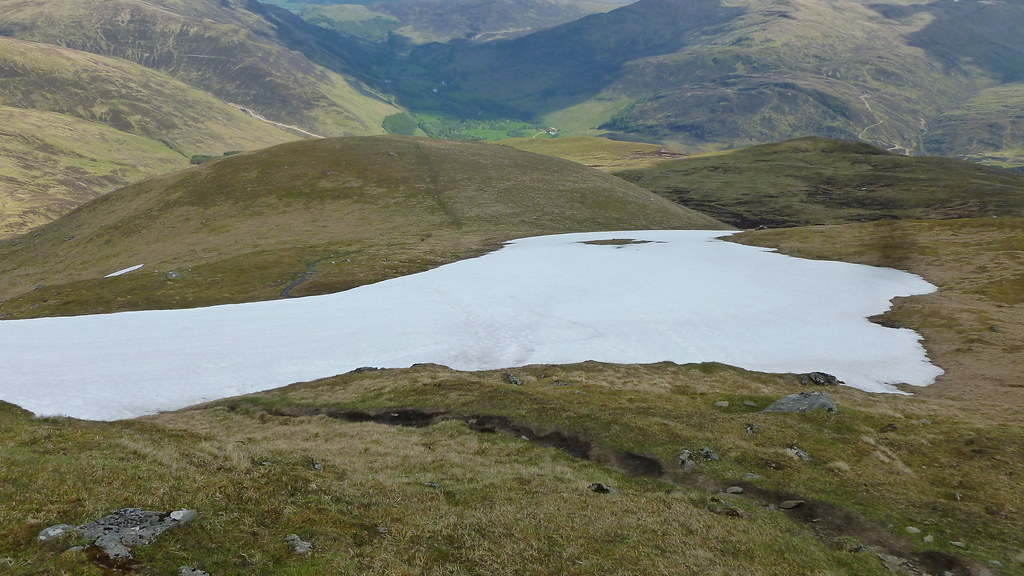 I threw some cool refreshing water over myself, reapplied the sun screen, crossed over a slightly dodgy looking bridge before making my way through the irrigation project back to the woods and to my car. I was planning on warning the workers how dangerous it could be sending walkers the wrong way but as it had gone 4pm they'd all gone home. And I was too tired for a fight!

Looking back up the glen 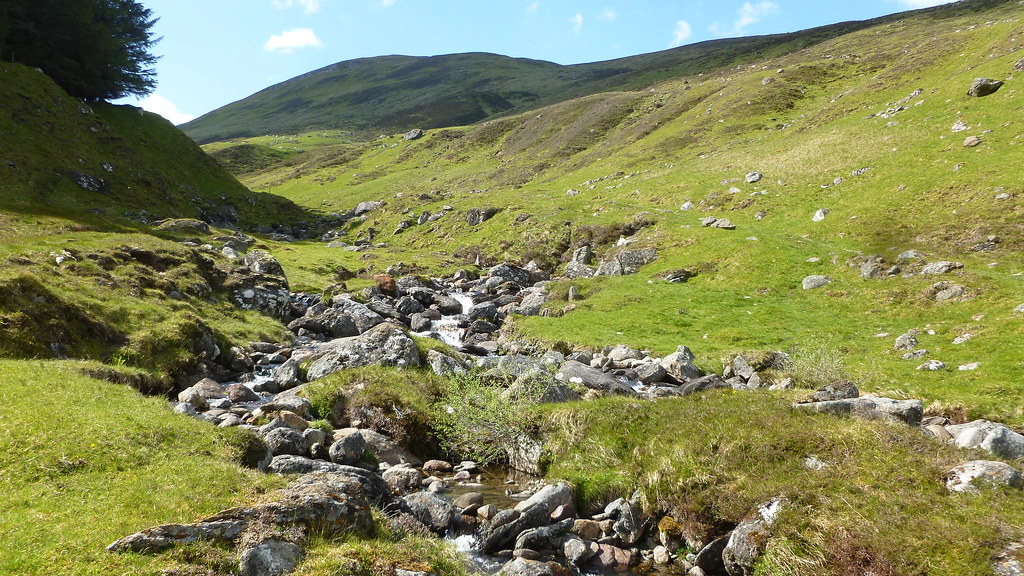 I then had 2 hour drive back to Glasgow, followed by my other half freaking out as my text from the top didn't send and he thought I'd fallen down a ravine. Oops. But all in all, a great day!

Nicely described, thanks for sharing your first report! Hopefully you can solve the picture issue for future ones - I do mine in Word first, with the picture links copied in there too, then all I have to do is copy it into the Forum post, and just check the formatting/editing is OK.