This was Day 2 of my 4 day walking lottery across northern Scotland with walking buddy Mr T. Having had a good day on Seana Bhraigh we thought we'd chance a second in the area, despite MWIS saying mountains south of Ullapool near the coast might have low cloud persisting. Well, the Fannaichs aren't Really on the coast are they? And anyway, with 35-40 mile an hour winds forecast it wouldn't stick around would it? So we spent a night wild camping near the river Black Water, to get an early start in the morning. When I say 'wild', the midges were wild and without much sleep all night I felt pretty wild the following morning!
Previous walk reports had suggested the way to go with the eastern Fannaichs is to cycle up the private road leading to Fannich Lodge. Cutting a good chunk off the time of the approach, and helping to keep feet dry too from what I'd learned. We parked opposite the Grudie power station and headed on up the track. A very pleasant start - a bit uphill but on a nice tarmac road through some mature forestry, then out into open country. 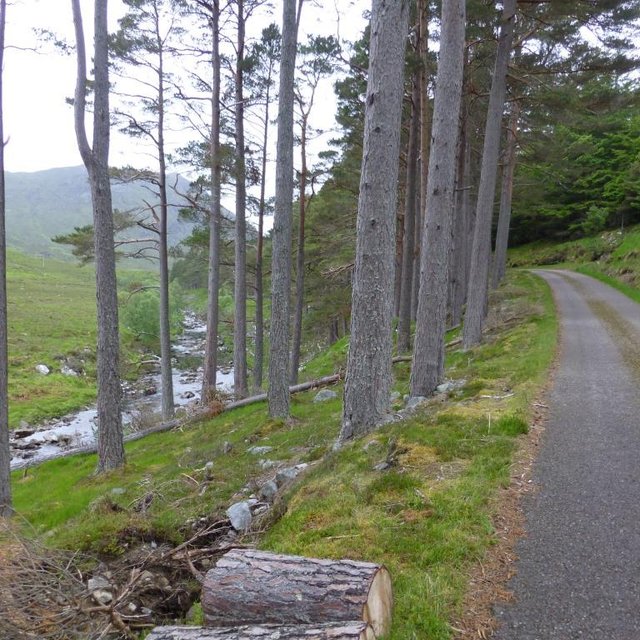 No sign of the long strip of water that is Loch Fannich reservoir for some time, and the mountains themselves were hidden behind the intervening hillsides. So it was a while before it became apparent that - darn it - the Fannaichs must be closer to the coast than I had thought! The cloud was pretty far down, and yes indeed, it was jolly windy, making the cycling hard going despite the excellent smooth surface!
In my ignorance I had been hoping we'd knock off the eastern 7 in a glorious round of summits, enjoying the stunning views I'd seen on this website. Mr T quickly disabused me of the idea we'd manage more than 4, and pretty rapidly I was more than happy if we got up any of them at all! Despite the weather, the views along the glen with the massive concrete pipelines feeding the reservoir were impressive, 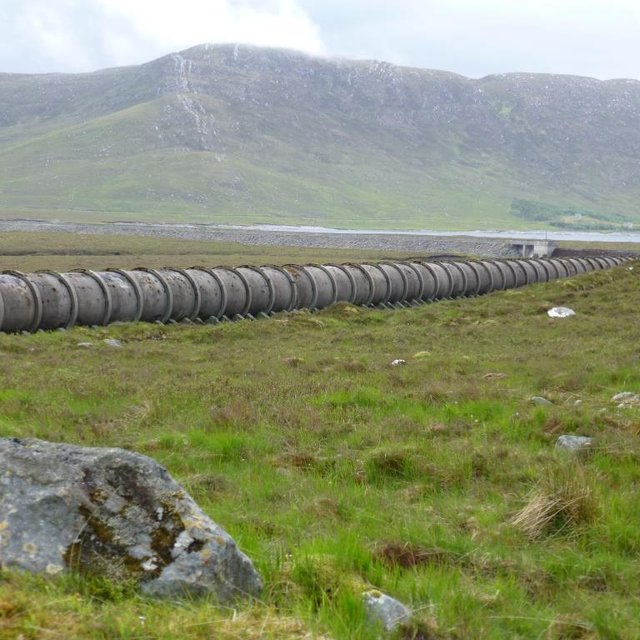 and the eastern corries below An Coileachan were also impressive as we approached the range. 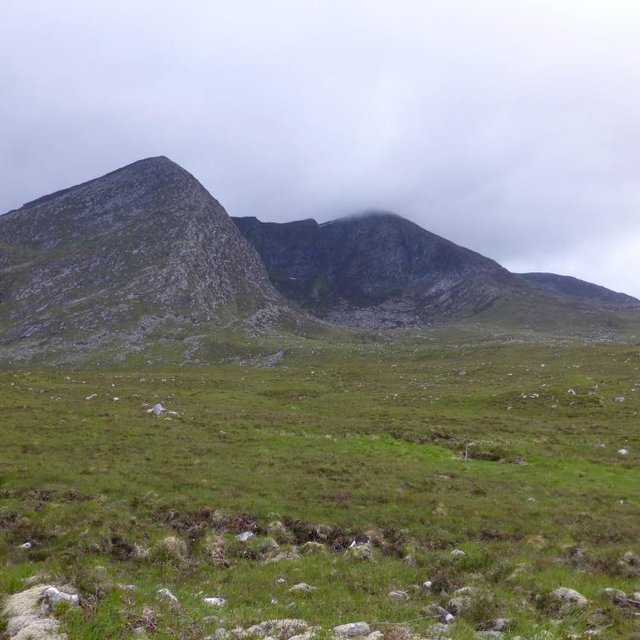 After about an hour's ride we left the bikes just before Fannich Lodge, which has a grand situation on the northern shore of the loch. 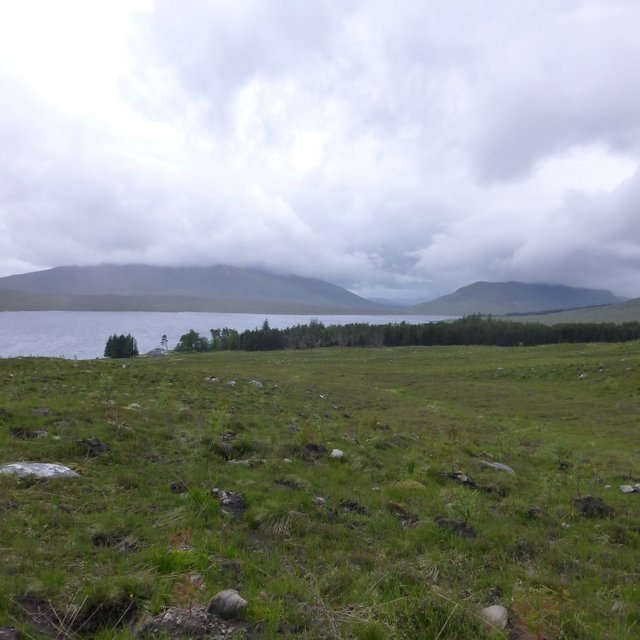 Nice to see the mature trees and signs of life before we headed up through newly planted broadleaf woodland into the gloomy clouds, lurking just above the first steep rise! 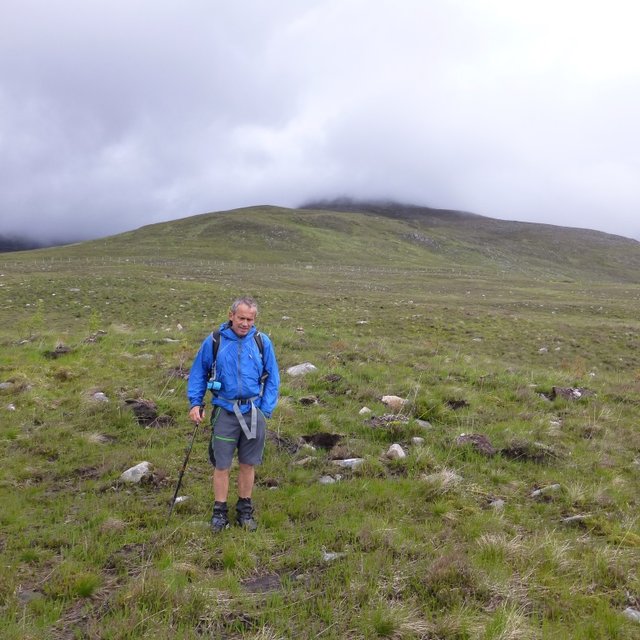 From there it was head down and keep tramping on a bearing. Not much to comment on en route to the summit of An Coileachan! 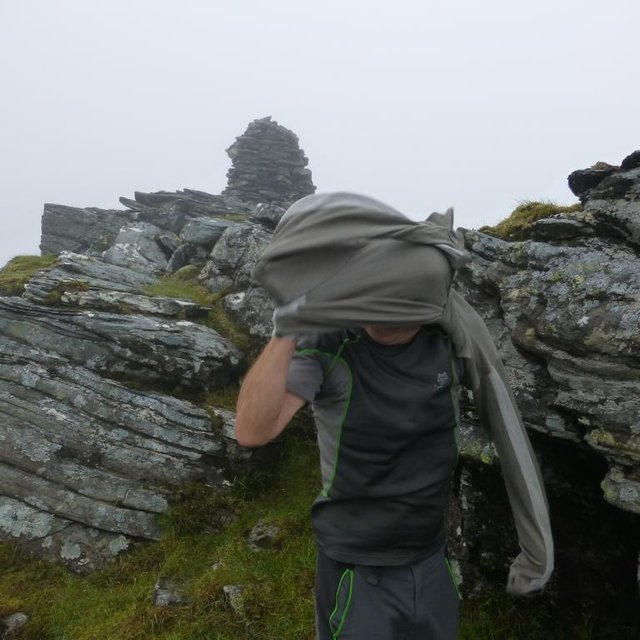 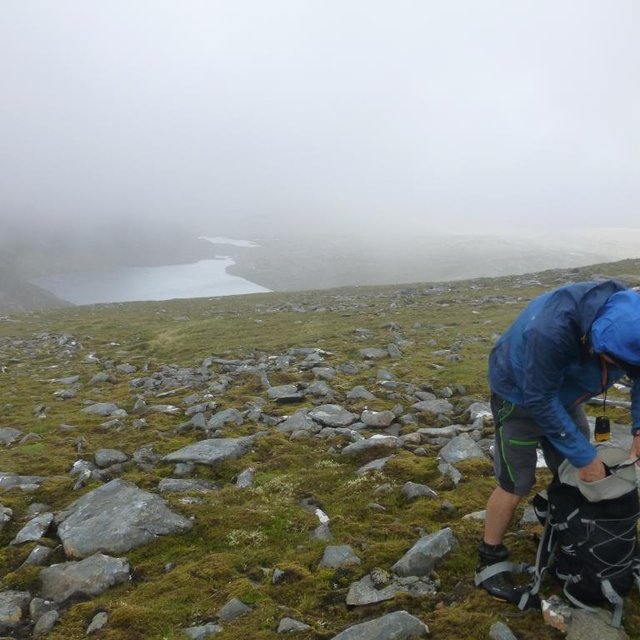 Or indeed to the summit of Meall Gorm. I think the veil did lift briefly near the Bealach Ban, but was down again pretty quickly! 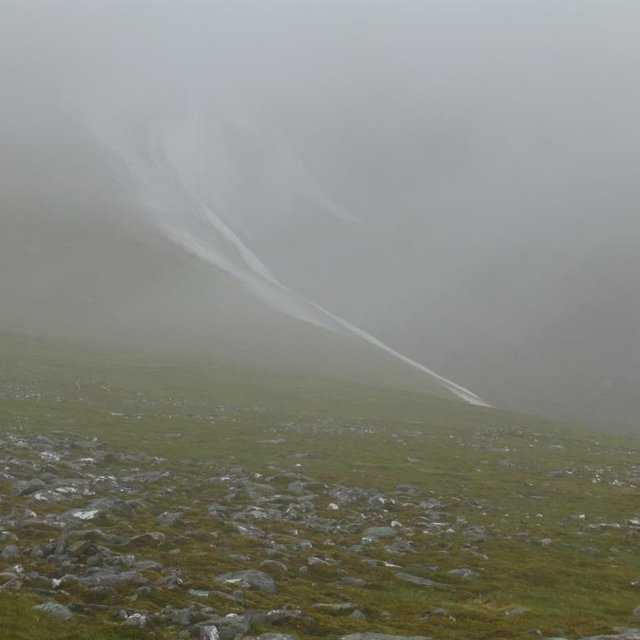 We might have glimpsed Loch Gorm briefly to the north. We did come across the Stalkers' shelter made of stone slabs just below the top of Meall Gorm. This gave a welcome respite from the strong wind , which was pretty cold, and a good place for a bite to eat before reaching our 2nd summit of the day. Whoop! 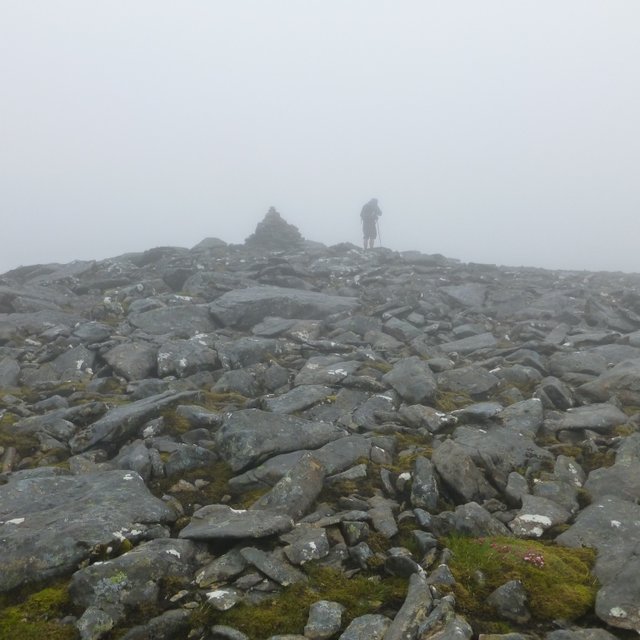 Oh, and did I mention the boulders? I love a bit of boulder-hopping but there's a lot of them up there, and it's not so easy to balance when the wind's gusting! The lack of visibility was all good practice with compass work, but it wasn't much fun and I had had enough! We decided to abort the mission! By now it had started to rain as well - what is wrong with our Summer weather?! I think Mr T would have gone on, but as I pointed out to him, you'd definitely want to see Sgurr Mor, so we might as well come back and do it with the rest on a better day.
Dropping south off Meall Gorm we quickly found the groove of the old stalkers path, cut into the hillside, zig-zagging down nicely. 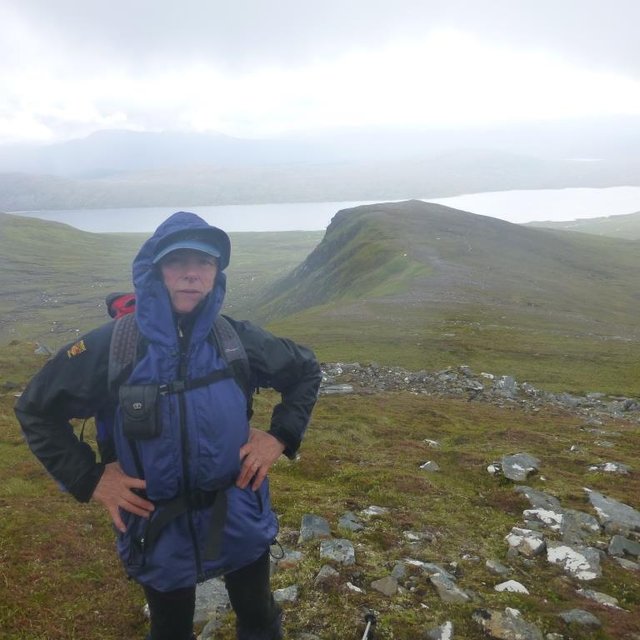 We left the cloud behind quite quickly - Mr T appeared to be swithering about going back up, 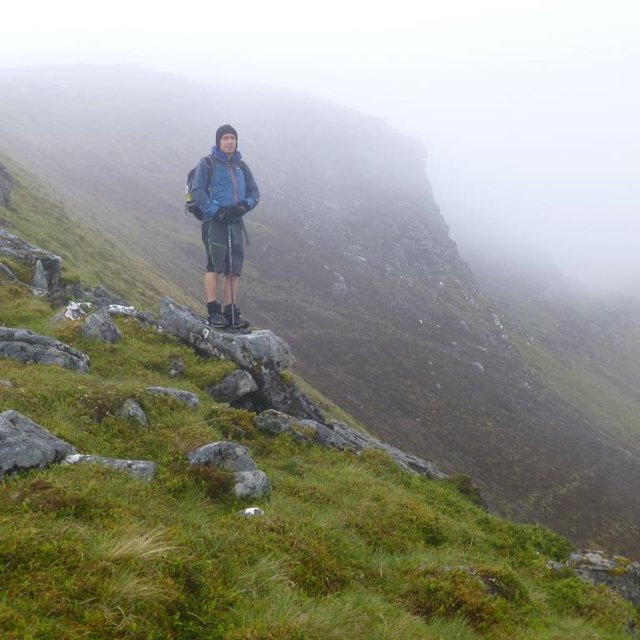 but common sense [in my opinion] prevailed, and were soon headed down into the wooded grounds of Fannich Lodge; 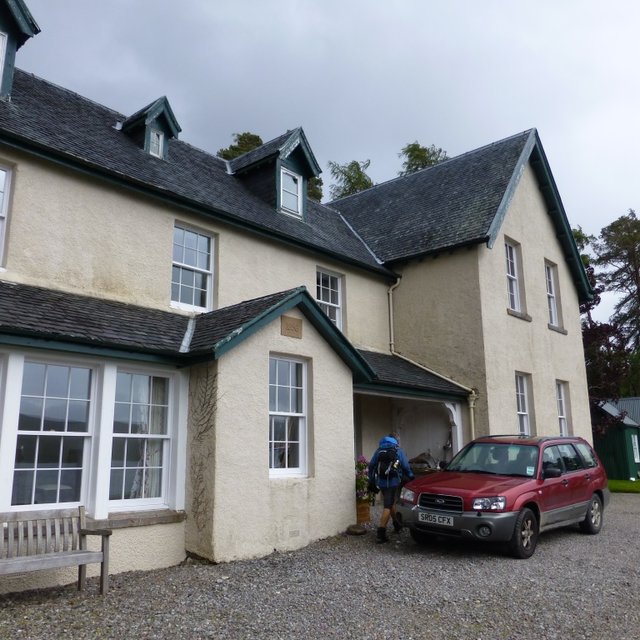 onto the road and back with the bikes. Needless to say it's always quicker going back, 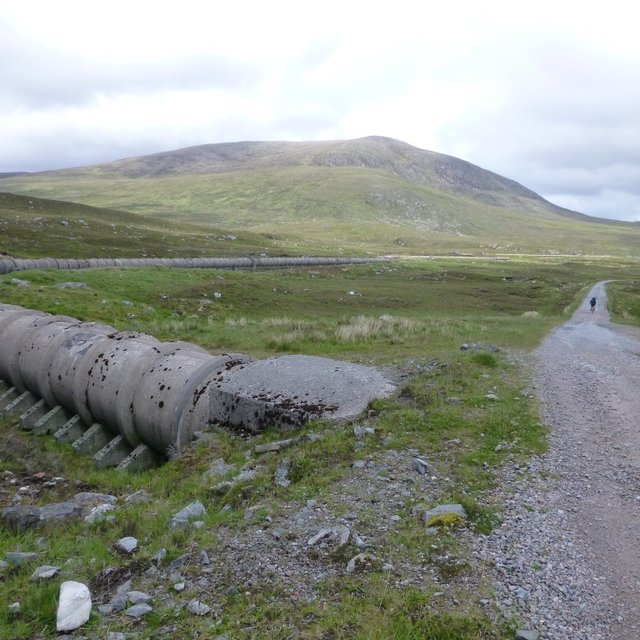 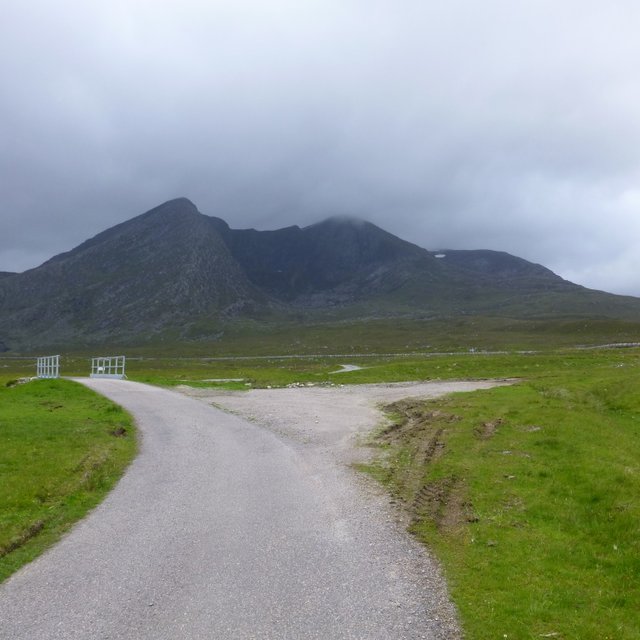 and of course the sun came out when we arrived back at the van. Repeat - what is wrong with our Summer weather?!!
I felt disappointed not to have had my wonderful round of the eastern Fannaichs, but I know I'll be back and get them one day. I've been promising myself that for the last 3 years!