Tempestuous Tops but no Tors in the 'gorms

Tempestuous Tops but no Tors in the 'gorms


Following a long (and late) venture down Glen Ey, I occupied myself with lazier diversions around Braemar and Deeside during the Tuesday, then Wednesday. There were enough strong breezes and showers further down to make me believe the forecast strong winds and cloudy conditions on the hill, but I was starting to chaff at the bit. With my time in the Highlands running short for this year, I wanted at least one more fix of altitude, if possible then Munro-flavoured.

I have almost "run out" of quickly-approachable Munros in this area, except a few (on the Angus side) being saved for easier walking with my brother. There are some Munro Tops that I have missed; Carn Bhinnein seemed too slight for a day's walk, while the four around Lochnagar looked most fun combined with a scramble up the Stuic, which I didn't think wise in possible 40mph winds!
So I chose this (comparitively) short and (relatively) low pair of Cairngorms Munros, with two Munro Tops as easy additions - and the possibility of continuing to Beinn Mheadhoin to extend the haul of Munros and Tops. That would involve a very long walk and more substantial ascent (both of which seemed doable), but depended on the terrain and, especially, the weather.

I set off from the Linn of Dee car park before 9 AM, taking the usual path through woods and then track to cross the Black Bridge in Glen Lui. These stretches seem to has escaped damage in last year's summer surge, so everything was familiar from my visit to Ben MacDui last year. Except maybe the cloud, which was lower and the breeze, which was stronger even down in the glen.
Hearing a vehicle, I stepped off the track to let a landrover with NTS livery pass. I caught up with it parked at Derry Lodge, where several staff were having their morning cuppa in some shelter. I gave them a hello and had a brief chat about conditions, getting some reassurance that there shouldn't be a problem with laying snow on the main routes.

After passing the Lodge and other buildings, I paused to admire the new footbridge (and I'm guessing the trunk that had served as temporary bridge for some months before that). New bridge over the Derry burn

There was a small encampment along the riverside just past this - I kept to the path on the east bank, which is the usual route for my intended hills, though noting a warning about flood damage to paths on that side of the glen. It took hardly five minutes to reach the proof of this. Crossing such areas was straightforward with the burns low and my long stride, but could be tricky (and more damage result) when the water rises. The path gains height very gradually, curving and crossing further burns on the lower flank of Meall an Lundain. Patches of Caledonian Pine mingle with smaller trees, open enough to give views of the hills fringing upper Glen Derry. There was one more substantial burn to cross, carrying water from Coire an Fhir Bhogha and the southwest side of Beinn Bhreac. I kept with the path for a while longer until it reached about 525 metres height after the end of the woods, then turned right rather than descend (slightly) towards the Derry Burn. My direction required some heather-bashing, though with hints of a path here and there, then a boggier stretch including recrossing the burn from Fhir Bhogha. The ground beyond stayed wet, but grew steeper as I sought a route uphill. The weather also seemed to become cooler and breezier as I gained height, to the extent that I felt quite comfortable in a jacket when I tend to ascend in a baselayer, whether sleeved or not. Fortunately I'd picked a T-shirt for that day, though even something warmer might still have been fine. By as much luck as judgement, I came onto the rounded upper slope of Beinn Bhreac's West Top, where a light shower came whisked in by the wind.
I wore waterproofs from here onwards (at least until back down in the Glen); there was not much or heavy rain, but they were handy for reassurance and a second layer of wind-proofing, as much as anything else. After a brief visit to the undistinctive West Top, I crossed the scarcely-noticeable dip, then rise, to the main Munro, adorned with a wooden post through the cairn and boasting a recognisable path. The wind was significant, but more inconvenient than actually challenging at this point. Although the weather wasn't great, it had taken less than three hours so far and I wanted to continue. The neighbouring Munro Beinn a'Chaorainn wasn't covered by cloud, even if everything else taller seemed to be obscured - and reaching it would require crossing several miles of boggy open plateau.
So off I went along the offered path. This soon descends a little way on the northeast side of the hill (while heading north), making it sheltered enough for me to take a lunch stop. I was happy with this bearing, since it aimed straight for the Munro Top (Beinn a Chaorainn Bheag), which made sense before taking in its parent hill and descending towards Glen Derry. I didn't even entertain ideas of heading east with the weather likely to be much worse atop massive Beinn a'Bhuird. Beinn a' Bhuird shrouded by cloud

After the food stop, I continued over the open terrain of Moine Bhealaidh. This was in a good condition for walking at that point; the peat had formed a dry crust, springy and firm enough to take my weight with ease. There were softer, mossier patches, a few tiny lochans and pools, but nothing too troublesome and all at a gradient that Norfolk could be proud of. The ground does eventually rise and become rockier approaching Ba'CB, but this stretch took little over an hour, including eating.
Beinn a Chaorainn Bheag stands out to three directions, but is dwarfed by its parent hill to the west (and both are overlooked by far larger hills to the west and east). That had the silver lining of leaving both hills beneath the cloud ceiling when taller and more dramatic hills were hidden, sparing me the need to navigate by compass when the wind would have been trying to snatch that and my map away. The wind grew stronger (or, I was simply more exposed to it) during the ascent, so I took a few photos and then headed down to the lochan-scattered bealach to take another brief break there. Some of these held water, others were flanked by banks of reluctant-to-melt snow. Sheltering at the bealach

Setting off up the east ridge of Beinn a'Chaorainn, I made slow work of the bouldery ground and wind that seemed increasingly intent on pushing me back the same way. At last the cairn came into sight, with the side of a backpack next to it.
I called a hello from a few steps away, finding that one other walker had braved the weather and was enjoying some lunch. We chatted for a few minutes and exchanged "notes" on routes, since he had come up from the glen and intended to head over for Beinn Bhreac next. I did take one photo - it may have brightened briefly, though this also shows the proximity of the cloud overhead - but felt too exposed to the strong wind to finish my lunch, or hang around for long. I descended southwest for some way, with traces of a path. After dropping 150 metres or so, conditions were calm enough for me to take a bite and also study the steep slopes opposite. I decided that they would be a possible approach for Stob Coire Etchachan (and so the rest of Beinn Mheadhoin), but unfortunately not in the conditions that day. I may end up walking it from Loch Avon, perhaps combined with Cairn Gorm and vast numbers of Tops, but that will be some other year. So, though the afternoon was still young, I reached the Lairig an Laoigh path at about 2 PM and aimed southwards. There are good views of the peaks and corries to the west, with a good path to speed you down the glen. I found the Glas Allt Mor burn active, but simple to cross in the June conditions. Though, given the state of the path where it meets other burns, many points along this route could be difficult during spate. 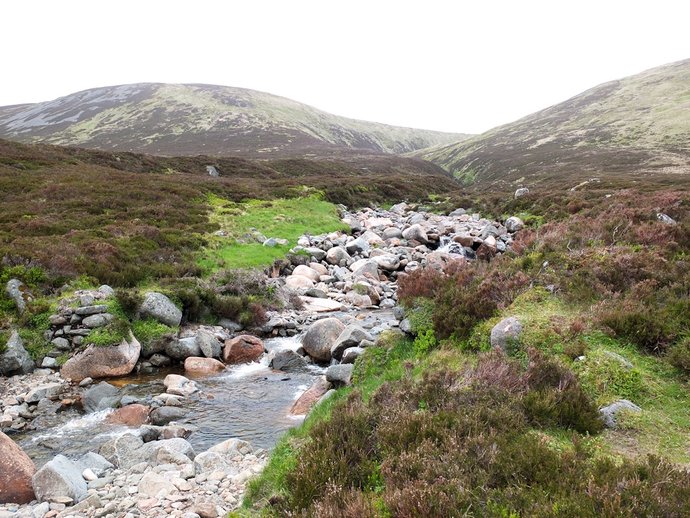 I kept with the path back down Glen Derry, sometimes getting hints of brightness, but also a few specks of rain. Things were sheltered again compared to the hill, so I could shed a layer, but still kept one jacket for comfort. View back to Derry Cairngorm

It took some while to reach Derry Lodge (at about 3:30). I left the track shortly afterwards to visit Bob Scott's, mostly out of curiosity. Though, finding several folk inside and a fire going, stopped to warm up and chat for a bit. Two were packing up after a few days' walking (having base-camped outside), another was staying that night. I managed to get going again, reluctantly leaving the snug shelter for a cool breeze.
There was another shower or two for the last few miles of track and path, which doesn't get any shorter, nor looked its best in that weather. I'm afraid that I was more disappointed at needing and deciding to keep to the "short" version of the route, rather than glad at walking two hills (and their attendant Tops) and getting to see them at the same time. But I was also in plenty of time to get dinner in Braemar, so took some consolation of the edible (and drinkable) kind.

Re: Tempestuous Tops but no Tors in the 'gorms

Lots of flood damage around