So hillwalking wise 2015 hasn't been the best for me, only 3 munros bagged all year. Plenty of wee local walks done, just very liitle going up big hills!

This would be our fourth walk together, but our first bigger walk and Suzanne's first attempt at a doubler. We would see how it went.

We rolled into the small car park at Bridge of Orchy station and ready to go for 10am. The first part of the walk heads through the wee tunnel under Bridge of Orchy station, hanging a left turn and heading up hill at a constant, but not too strenuous gradient. Not having been out for so long, I was grateful that the weather had stayed dry, so I could take advantage of the various photo ops on the way up! The path is badly eroded and with all the wet weather we have been having every wee dip had turned either into a mud bath or a swamp. Thankfully, most of it was skirt-round-able and before we knew it, we were up into Coire an Dothaidh. It's not a massive bowl of a corrie, but it does just about manage to give you that all enclosed feeling as the cliffs tower above you. We settled down for a quick bite to eat on a conveniently placed, big flat rock at the back of the corrie, just before the steep, scree slope up onto the bealach between today's targets.
Energy renewed we made off up the scree slope and found it wasn't quite so tough as it looked from down below. 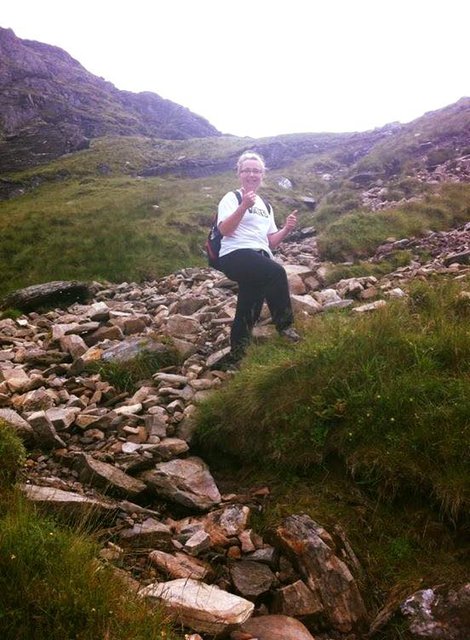 Once up to the bealach we opted to tackle Beinn Dorain first, just because it was higher and we wanted the big one out the way first!

The climb up the ridge is straight forward enough, on a big broad path that winds around some wetter ground before reaching another wee steep section on loose-ish ground.

We then opted for the low path, cutting along the side of the mountain, high above the steep drop down to Bridge of Orchy and at A82. It's a fairly narrow path and rocky in places, but nothing too worry about in summer. (Icy conditions would maybe be different.) The lower path bypasses the Sassenach's cairn and the true summit before corkscrewing back round on itself and coming back up to the summit from the south. At the point where it bends back on itself, you are standing at the top of that famous Beinn Dorain pyramid and even with cloudy skies, the views were fabulous. Ben Cruachan away to the west, Ben Lui and pals to the south and the Glen Lochay munros and Loch Lyon out to the east. 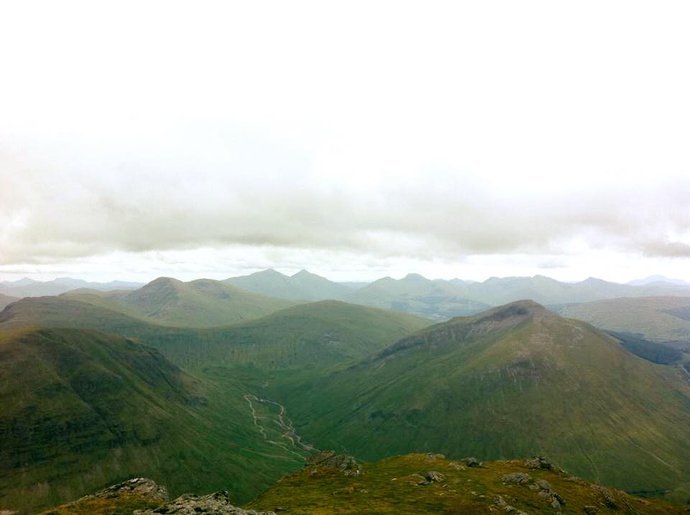 Another group arrived at the summit just after we did and they were kind enough to take our picture. 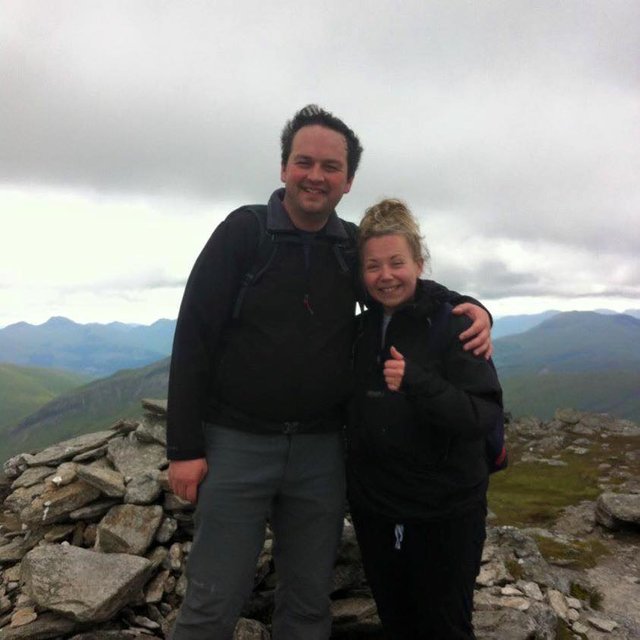 From the summit we headed over to the Sassenach's Cairn and then on down out the wind to have our lunch. Once again refuelled we headed down to the bealach and with weather seeming likely to close in, we debated whether to do the second one. When an Irish lady, who had been doing the hills the other way around piped up "Only 45 mins to the summit, bit wet though." So off we set.

At first the path OK, a bit eroded but manageable. Then it deteriorates into a wet, boggy, grassy floating carpet hell. 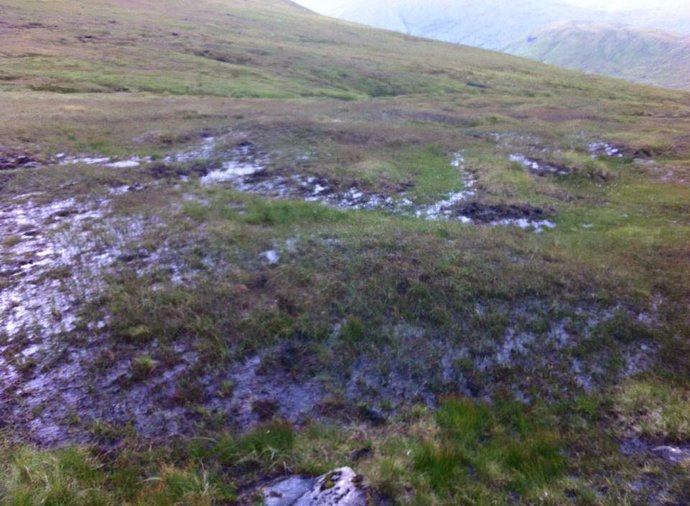 Our light weight trekking shoes, which had coped admirably until this point were not match for what this 'summer' has done to Beinn an Dothaidh. This area is probably always damp, but it was absolutely sodden with muddy water squelching everywhere. Eventually though, we crossed it, reaching a uniform grassy slope. Not long after we were at the summit. Exactly as the Irish walker had said, forty five minutes and a lot wetter we had summited Beinn an Dothaidh! Suzanne's first ever double and munros 96 and 97 for me. Despite coud getting lower, we could still just about see as far Ben Vorlich and Stuc a'Chroin; Ben More and Stob Binnein. In the other direction we could just make out The Black Mount, The Ben, the Mamores and the Loch Treig hills. The best view though was back over the way we had come from Beinn Dorain. 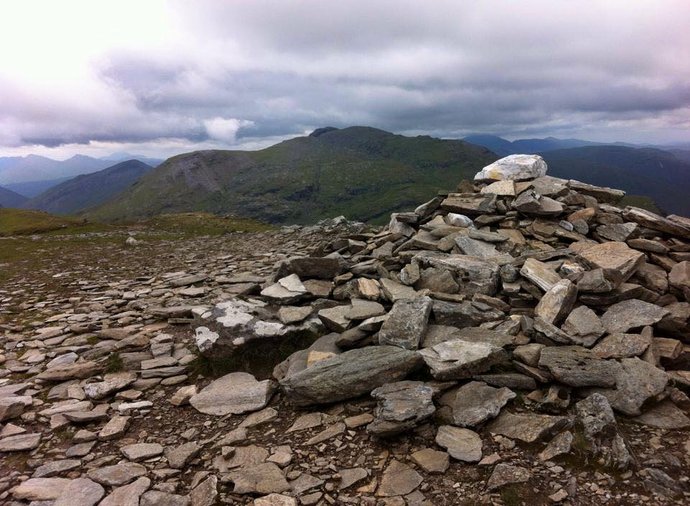 From here there was nothing for it, but to brave the wet squelchiness and return to bealach and then back to Bridge Of Orchy station. As we neared the station, the clouds finally broke and the rain came on. But to lift the gloom a big fancy train stopped at the station. The Royal Scotsman. Nice one Bryan, that walk around the side seems to go on a bit, I thought I was going to end up on another hill

Weather did close in towards the end of the day. I came up the back of those too having been across to the others behind, but no path that side which surprised me given the good track along the base, but probably still easier than the regular route, I could see it easily, looked a bit of a mess same time last year

These two should be epic, they certainly looked that way from the road up to Glencoe, so I did them last year expecting awesomeness, but after a good start the clag came down and I only got a few glimpses of what might have been from the second summit for me Beinn an Dothaidh, hopefully at sometime I'll get to go back

Well done for toughing it out in trekking shoes, I had leather boots on and still felt uncomfortable by the end of Beinn an Dothaidh, and last year was a good summer

Aye Spider, I was surprised there wasn't a wee path coming up the other side given quite a lot of folk bag these as a 4 or 5.

Ancancha - maybe keep those Dothaidh views for a good, cold, crisp and clear winter's day when the bog's frozen.