The Grinch who Stole the August Bank Holiday

The Grinch who Stole the August Bank Holiday

First post in a long time and first hill walking in a while. But great to get out on the hills again.

I love using this site to get inspiration for walks and tips from this most excellent community. So as this weekend we did a different route from those I have seen posted, and learned a thing or two along the way, I thought it was time for a posting which may give something back for you all.

We went up to the lakes as a last minute booking on Sunday morning REALLY EARLY (Norfolk is a long wat from any hills.....), to have a day's walking, a night at a hotel and a potter about before going home on the Bank Holiday Monday. We made up a last minute route to walk from the Ullswater steamer at Howtown back to Glenridding either repeating the route some other users have posted of up Hallins Fell and then round the waterside, or if we felt up to it up Hallins Fell, then up and over Place Fell. Turns out we were up to it and that's what we ended up doing.

Throughout the early part of the walk I was wondering where have I heard of Howtown before? Then it came to me. It was the name of the town in the Grinch story! Except as my other half informed me that was actually Whoville. But a great town twinning opportunity there I think, especially if they can find a Whyburgh and a Wherewich to go with them. So as the rather odd looking, generally grumpy chap looking down from a mountain at the happy native How's in their village on a holiday period I was filled with a sense of being in the right place at the right time.

Anyway the route up and down Hallins Fell was a pretty nice affair, but really crowded with lots of groups enjoying the unseasonal dryness. Despite this it really is a very nice little fell, and it was great to see so many young kids having fun. 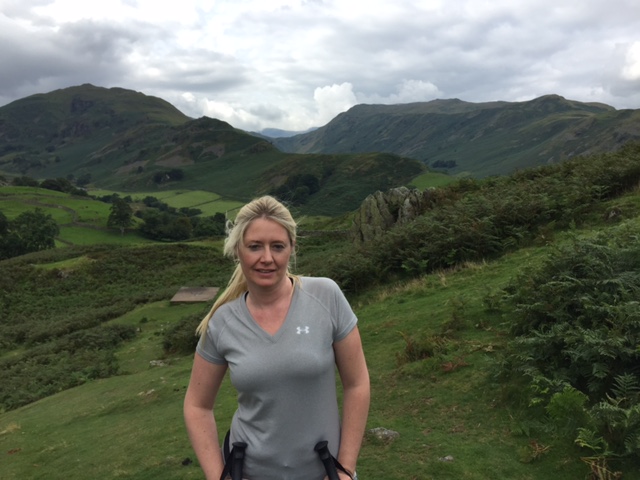 Debbie Half Way up Hallin Fell - Beda and Place Fell Behind 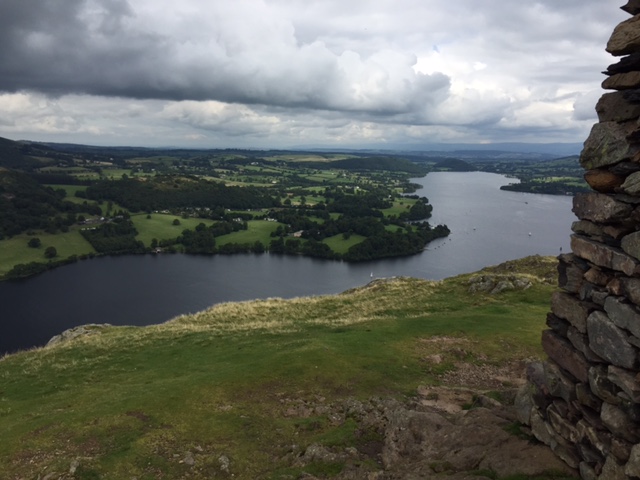 View From Top of Hallin Fell Toward Ullswater

The second part of the walk was where it got more challenging - Place Fell from this side and over is a decent hill, and as the link between the two hills means going down more or less to the lakeside elevation, this meant much more ascent that might be expected on a walk where the high point is just 650m or so - by the time we were finished my garmin showed over 800m ascent for the day which could have got us up a fair few of the Lakes giants or many a Munro.

The link path between the two fells was pleasant, and gave our border collie Bailey the chance to ignore a proper working dog rounding up the sheep in one field and then getting a ride home on the back of the farmers quad bike. Not sure if Bailey's indifference was out of jealousy or embarrassment

We had planned on taking a much more gentle ascent of Place Fell, gradually following the path to the North of the Dodd, but ended up on a steeper version which went up Sleet Fell (by a more winding route than that shown on the OS map), and which wasn't shown on the BMC map we were using for the day. We only realised when we had already gained some height, and reluctant to go back down we carried on up. This climb was the main hard work of the day before reaching the much more gently sloping top from Sleet Fell along the broad back of Place Fell. The top of Sleet Fell did make a great point for a lunch break and provided much better views back to Hallin Fell than our planned route would have. 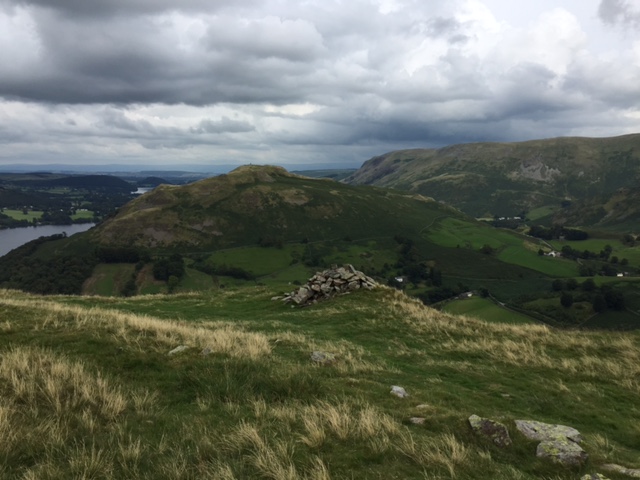 View Back To Hallin Fell from Sleet Fell

The route we chose seemed a popular route of descent from Place Fell, but we really didn't see anyone else going in the same direction as us through this part of the walk, until we reached some of the other paths coming up from Boredale and Ullswater.

The route along the top of Place Fell is interesting enough, was mainly pretty dry underfoot, presents a few knobbly bits for those who fancy a bit of a scramble, and gives good views in all directions. Generally a nice 'Place' to be with a few satellite summits to explore or skirt as the mood takes you.

The summit itself is satisfyingly pointy - no problem identifying the top of this hill, and rocky enough to make the final approach feel suitably dramatic to reach the marker. 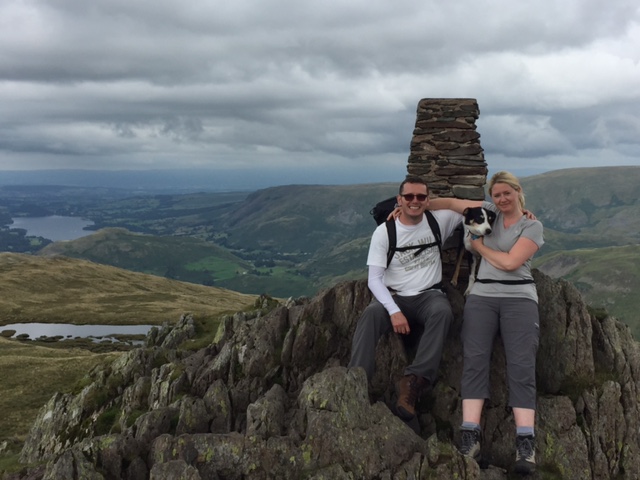 The summit gave the expected excellent views, especially of the Fairfield and Helvelyn ranges to the West, but also of the High Street Range to the South. 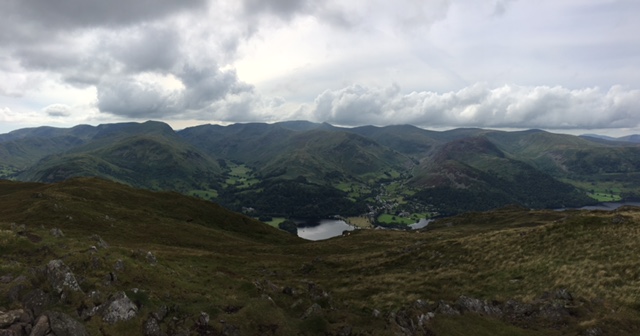 Panorama of the Fairfield and Helvelyn Ranges

It was at the summit we learned one lesson worth bearing in mind for anyone else thinking of repeating this route in either direction. We had considered doing this in reverse, by parking up, walking and then getting the boat back. The kind folks who took our picture at the summit persuaded us that we had made a much wiser choice as the steamer stops running surprisingly early, and we would have missed it for a return. I highly recommend using prudence and getting the steamer leg in first so as not to get stranded. I imagine that a taxi from Glenridding to Howtown would have been very expensive!

After a nice breather at the summit, we started down towards Boredale Hause, enjoying the views of Angletarn Pikes ahead. The path down in places is seriously eroded - testament to this being a much more frequented route to the top than the one we used, and I can imagine it being a pretty wet affair in the rain - more a stream than a path I should think.

At the Hause we were somewhat confused by the presence of drain covers. There were certainly sounds of running water below them, but what their purpose is eluded us. Still from here the view turned for the first time towards our objective and Patterdale below us.

Descent from Boredale Hause Towards Patterdale

The path down was easily followed and brought us out conveniently close to the beer garden outside the Patterdale Hotel to enjoy a quick refreshment before going back to the car park at the Steamer Pier. A very nice walk overall!

That looks a really nice wander, I particularly like the route you used making a nice one way event (I hate going back over the same ground) so one way or a loop is always a winner for me. Looks a wee bit stormy, did you dodge any showers or was it just an angry sky. Great report anyway, it would be nice to see a few from Norfolk if you do any down there

The walk remained remarkably dry, and we didn't see any rain until we left Cumbria on the Monday. Back home in Norfolk I believe it rained pretty consistently so a great shout to head up to the lakes. I don't know if you saw the news reports about a Cumbrian hotelier a week or two ago complaining about the weather forecasts not doing Cumbria justice and always predicting rain. This weekend was a good case in point - for most of the week rain was predicted for the bank holiday weekend, but we were very pleased we didn't let that put us off.

The steamer is a really good way to add a bit of interest and open up some linear walks. And its a great little trip on Ullswater. Well recommended. I think getting to go right over Place Fell made a much more interesting walk than it would have been as a straight up and down from Patterdale. I thoroughly agree with you on going back over the same ground.

Norfolk has some great beach focussed walks and trips through the broads, but rarely feels properly wild enough for a trip report. Wells to Holkham along the beach and back through the woods is a great walk, but I don't know if this is the right forum for a walk which starts with an ice cream van, finishes with an ice cream van and has an ice cream van at the turn back! Maybe I should try a bit more and get something put up sometime to show a completely different, but still very beautiful part of the country off.

I'd love to see some of the Norfolk beaches and broads. Me and the Mrs have enjoyed a few weeks down there when we lived in Lincolnshire....loved it (except for her boat steering which left a bit to be desired)

Ice cream vans do make a nice feature on a walk

Will have to take some pics next time and post a report next time to keep you nostalgic Chris!

The boats do allow for some nice routes in this part of the world. Glad you got nice weather, last time I was atop Place fell it was a howling gale and torrential rain, which is a shame 'cos as you say it's a very fine top. Nice to see another good report from you