Wow! What a day! Another solo walk in September, but this was way longer and bigger than the others I'd done. The weather forecast was terrific, and since there would be no stalking issues on NTS land, I decided to go for a big Cairngorm walk. Parked at a very busy Linn of Dee car park just after 10, and was on the way almost immediately. Just as well as the midges were ravenous!

I decided to head for Derry Cairngorm, "then see what happens". Only having an ancient sheet 43 OS map curtailed my options a wee bit (Beinn Mheadhoin isn't on that sheet), but thankfully I didn't rely on it for path detail. I made good progress up to Derry Lodge, across the new bridge, and then carried straight on (N) up a wee (but very well made) path through the trees to gain the SE slopes of Carn Crom. I bypassed the top to the right, but chickened out of the bypass path that seemed to go right through some crags. 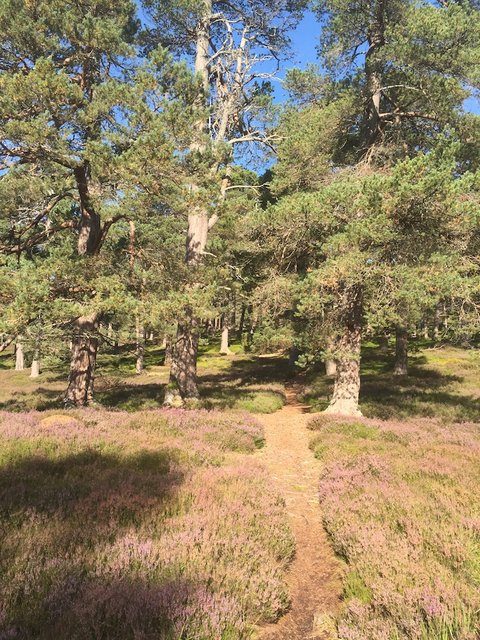 Path from the bridge at Derry Lodge, climbing N through the trees N to Derry Cairngorm, with Glen Derry and Beinn a'Chaorainn to the right

Then it was fairly fast going up the ridge towards Derry Cairngorm, bypassing point 1040m to the right, and getting to the summit ahead of schedule (2h 20mins). A quick break and lots of photos, then decided to circuit round Coire Sputan Dearg and head towards the Carn a'Mhaim ridge. Since the last new Munro I'd done was Ben Macdui, and I thought it would extend the route too far, I didn't think I'd need to do it again, so the plan was to bypass it to the south. So I headed N, skirting Creagan a'Choire Etchachan to the W, and staying on the ridge above the crags. There were some terrific views down into the corrie, and also N to Loch Etchachan, and I made pretty good progress up to the 1230m contour line. 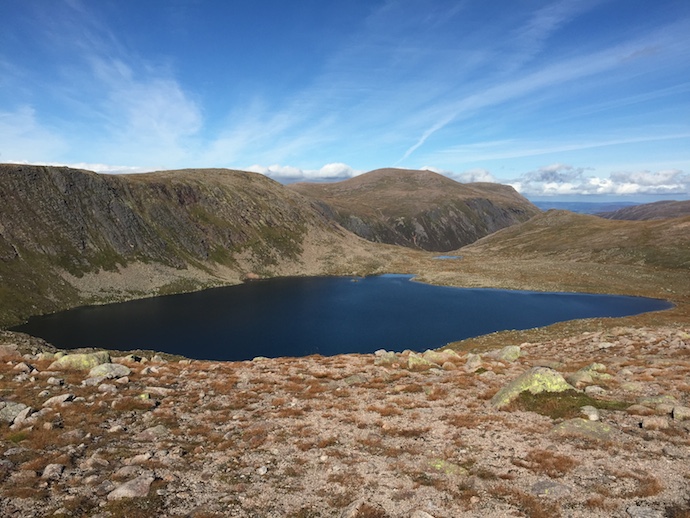 Looking back over Coire Sputan Dearg to Derry Cairngorm

So, yeah, of course I went to the top of Macdui

(3h 40m) It was really busy up there too. The fabulous weather had people summiting from all different directions, and everywhere seemed clear with the exception of some clouds on what I think was Monadh Mor. More photos of Cairn Toul and Braeriach, and then headed off back SE to cross the wee burn that heads down into the Lairig Ghru. I wanted to cross it before descending to the start of the Carn a'Mhaim ridge. There was a path down the side of the burn, but it got very eroded and steep, so I decided to contour S, and then descend.

This was the most frustrating piece of the walk, clambering down over boulders, picking up scent of a path only to head into another boulder field. The ptarmigan who lived there had a good laugh as they flew around me. But I eventually hit the start of the ridge, and after a break, I headed S towards Carn a'Mhaim. The ridge was as good as I hoped it would be, and was a great way to survive the last big climb of the day (5h 20m). Looking over a tiny River Dee to Beinn Bhrotain and Devil's Point, from the Carn a'Mhaim ridge

There are plenty of granite mini-tors to sit against at the top, so I had a rest before heading SE down to Luibeg ford. Thankfully there was another cracking good path not on my map, so the descent was pretty easy. The river was low, so fording wasn't a problem, and after a drink and a wash, I headed east back to Derry Lodge. There were two fellas just ahead of me, and I thought that they might be company for the long walk back to the car park, but at Derry lodge one got on a bike and pedalled off sharpish, and the other one immediately turned off the track…and went into his tent. So I was on my tod for the last 5k back to the car, in just under 8 hours. But I didn't mind, it was a wonderful day.