For some reason I had had a bee in my bonnet for months about doing the Fiaciall Ridge. Maybe because I am trying to get into scrambling and it sounded like a good one for newbies, and maybe because I love the Cairngorms and it sounded like something a bit different up there. So I enlisted a couple of fellow walkers – Siobhan & Perry for two big days out! Day 1 the Fiaciall Ridge, Beinn Mheadhoin & Cairn Gorm then day 2 The Ben Via the CMD.

MWIS promised a great weekend weather-wise, perfect for a bit of a scramble. But as we left Edinburgh and got closer and closer to Aviemore the cloud got thicker and darker and looked like it was set in for the day. A quick stop for a pair of waterproofs for Perry and we were at the foot of the Ski lift shortly before 10. There was a bit of dithering as we got ready, all of us hoping to ourselves that if we waited a bit longer it would brighten up… wishful thinking  I was dreading it a bit now, even if the rock up there is described as ‘blocky’ or ‘grippy’, it was now going to be soaking wet and slippery. Nonetheless we headed on in the clag and rain.

The going up to the ridge was much easier than the last time I had been up this way and was knee / thigh deep in snow! The path was pretty clear and before long we were at the foot of the ridge. Visibility was poor, only a few meters which was a shame. The rock wasn’t as slippery as I had feared and for all but 1 move I followed Siobhan along the crest. Siobhan on the crest All too soon the fun little scramble was over and we were atop Coire An t-Sneachda. The cloud was now clearing and we managed a few minutes out of the wind and rain to stop for a quick bit and look down the amazing rock formations and into the Coire. I can’t believe how different it looks when it hasn’t had the ‘biggest snow dump in one night on record’ the previous day. Views opening up to the Coire Soon we were off and heading down towards the West side of Loch Avon and towards Shelter Stone. There was more descent here than I had expected but the paths are really good and the view of the Loch below is stunning. By this time too the rain coats could come off and we could see the Fiaciall in all its glory behind us. We didn’t go over to shelter stone as by this point we were beginning to realise that our plan to do a big loop and head back over Cairn Gorm was going to be a pretty big day! 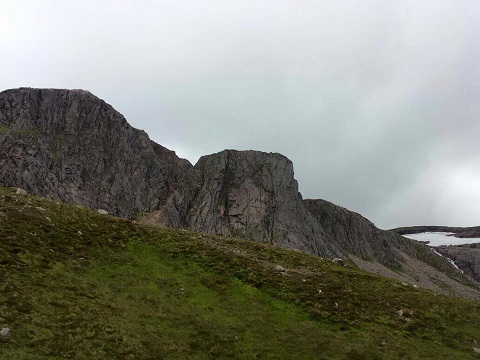 We crossed the loch, staying dry, said hello to a couple of wild campers and then plodded up towards Beinn Mheadhoin. The weather was now as promised, sunny and provided lovely views down to Loch Etchachan. Before long we saw the tors of the summit. Such cool formations. I always mean to go home and google the geology of these things then forget all about it… One day I will.

A few fun pictures and a lunch and tea spot in a nice wee shelter and we rallied ourselves for the walk up and over Cairn Gorm. Perfect sheltered lunch stop at the top - if only there were more like this!

We headed down to the east side of Loch Avon, hoping that we’d find a suitable point to cross without too much trouble. We sussed it out and I opted for shoes off, trousers rolled up and a borrowed flip flop that I found at the side, and the others somehow managed with boots on a bit further up (think they might have gotten a wee bit damp though). The going along the side of the loch was fairly easy, but as soon as we forked right it was a long slog up a good 400m. It was about 6pm at this point put the sun was still shining, the views in every direction were amazing and there was even a rainbow. However, it was basically heads down and slog up at our own paces to reconvene at the top! Great views to help the slog up to Cairn Gorm A much needed seat and sweetie!

By about 7 we were at the summit of Cairn Gorm, looking down to Loch Morlich on a stunning summer’s evening. We were all a bit weary as there had been a lot of ascent by this point. We followed the extremely well formed path down to the Ptarmagin and then over the ski fields back to the car. 9 and a half or 10 hours later we were dying to get to Tesco! Hobbled into the shop (as usual for me in Aviemore Tesco) and then back to the hostel for a hearty dinner and a few well-deserved drinks and an early night to prepare for another big day….
Thanks to Siobhan (Shivvy86) & Perry for a top day 

I know that bit pretty well, it's a hefty day out you had

I've been saving Beinn Mheadhoin as I've done most of the hills around it apart from Derry Cairngorm, I'm really looking forward to seeing those tors up close and personal. Massive structures.