Last year I met David from the Northampton area on Carn a'Mhaim in the Cairngorms and after a good chat during lengthy walk back to Derry Lodge I suggested he contact me next time he was up for a two week stint in Scotland. This year he came up to Invergarry for most of his stay and on Saturday we took two cars down Glen Shiel in order to walk the Five Sisters ridge. We had passed through a heavy shower on the way up the glen, but by the time we parked and kitted up it was mostly sunny and fairly warm. We took a path up the steep slopes past the forest, aiming for the Bealach nan Spainteach. This path took us just below the Spanish peak and although it was steep we arrived on the summit of Sgurr na Ciste Duibhe in 2 1/2 hours. By that time the clouds were beginning to close in and for the rest of the day we experienced every flavour of weather Scotland could dish out. The ridge itself was much wider than I imagined it would be and the walking was very straightforward but enjoyable. There are no problems reaching the 2nd munro, Sgurr na Carnach. From the summit we could see the rest of the ridge unfolding beyond Sgurr Fhuaran, the third munro. Ascending it we were belted with small stinging hail pellets until we reached the top. We were then rewarded with a brief sunny glimpse of the ridge behind us and the rest of the ridge ahead. From this highest peak it was an easy stroll down to Sgurr nan Saighead with its impressive craggy northeast face. With the wind gusting pretty hard we skirted around just below the top and made our way over to Beinn Bhuidhe before descending into valley Fasach an t-Searraich. Initially the descent path was very boggy but once across the stream things clear up all the way down to Allt a'Chruinn. We were 15 minutes from the car when the first rain shower of the day soaked us. We collected the 2nd car and made our way back to the B&B in Invergarry before setting off for a well deserved meal in Fort Augustus.

I was very impressed with the whole range and I'm sure on a day with better conditions the entire ridge would be a blast, but it looks to be very tiresome. It was my first walk in the area though and now I can't wait to get back. 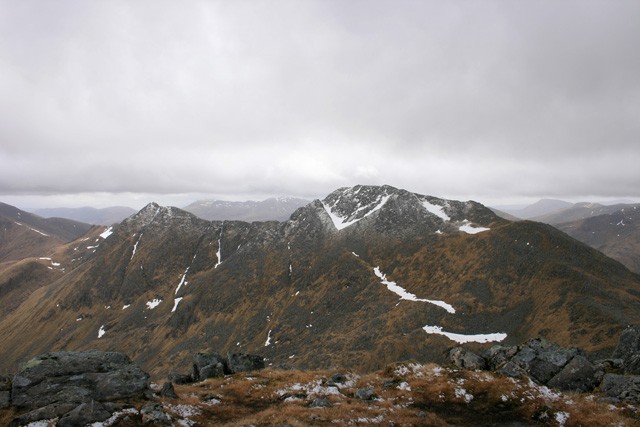 Wow, great pics Stretch. You been using that "HDR" technique again? Looks like you had a good day - I think I could see the 5 Sisters for a while from far away Creag Meagaidh on Sunday. A good one to do with a mate with a car

Yes nice report Stretch. There are superb views from the top of these mountains, I done Sgurr Fhuaran on its own last year

I hope to go back in the summer and pick of the other two. The last picture with the rainbow looks superb. Touch of HDR methinks

Was that a case of four seasons in one day?

Hi Monty, yes the last pic is an HDR taken from a Raw file, turned out pretty good I think. As for the four seasons, it seems so. Brilliant sunshine to begin with, the wind and cloud, then hail and snow, then rain. But this was a fine walk!

The last one is 4 seasons in 1 photo

Nice one Stretch, Saturday was a stinker eh, was cursing hail and snow showers up the top of maoile lunndaidh in mid May

Users browsing this forum: No registered users and 123 guests