Having completed one long trip over this way fairly recently, WH’er, Steve was keen to push me to the limit once again, with another long haul, this time making more use of the bikes, to visit these two remote munro’s. Again it was an early start, meet up in Crianlarich, switch bike to my car, then onward long haul of two and a half hours, to Lynn O’Dee. Fortunately, there was a large, enthusiastic reception party waiting for us. Unfortunately, they were all midge’s! But, fortunately, they were not as many, or as evil as the midge’s we were to rendezvous with later!

A frantic 10 minutes of preparation and we were on the bikes, heading west up the Dee, over White Bridge, then up the Geldie Burn to the ruin of Geldie Lodge, where things were to turn so unpleasant a few hours later. The road is quite flat, a bit stony here and there and fords several burns, some of which you wouldn’t want to tackle after heavy rains. Neither, would I want to tackle the 7.5 miles walk in/walk out on foot! 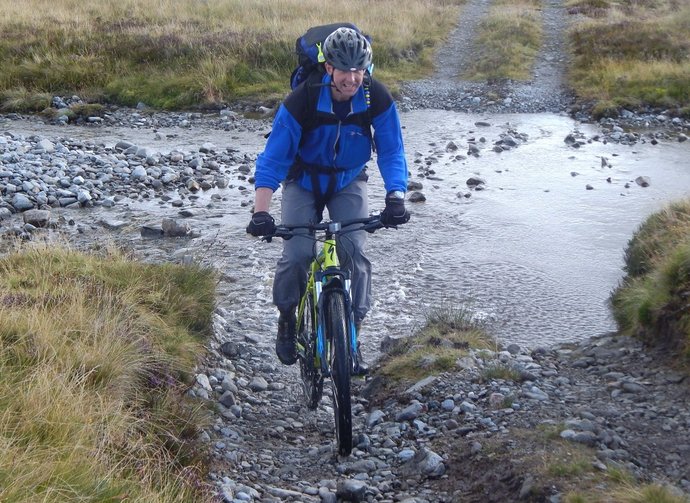 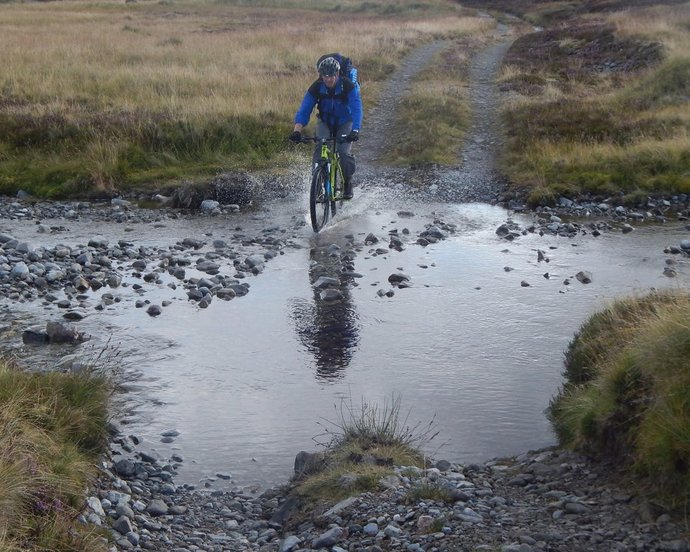 Steve makes it through this one. Not always the case though :) 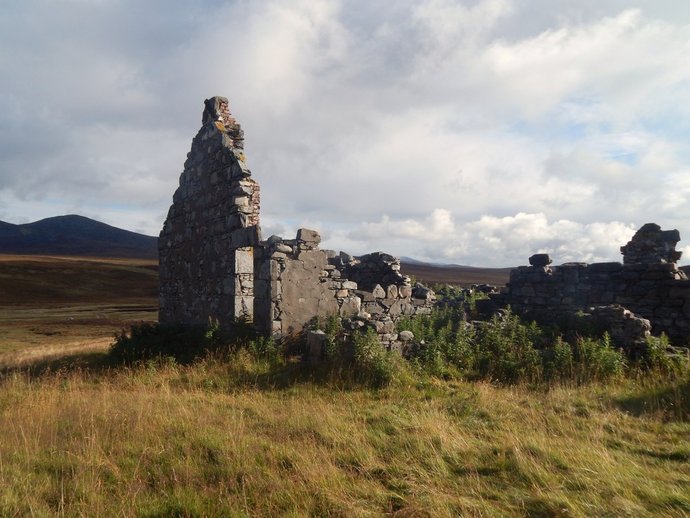 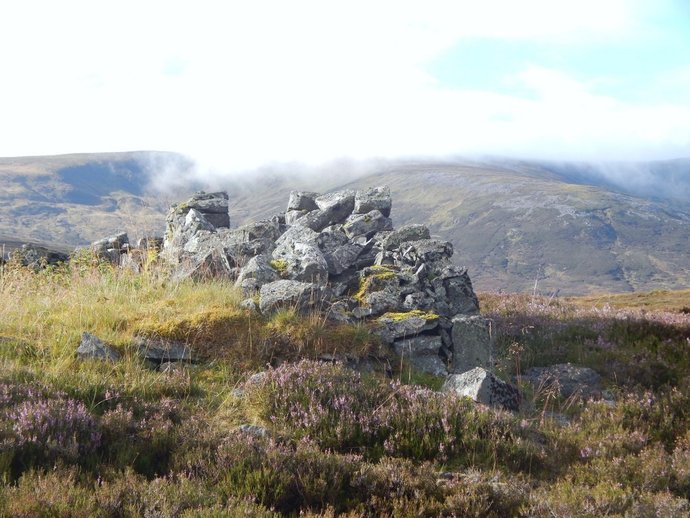 Towards our hills. Not looking too good.

From the ruin there is quite a clear path, which heads off through the heather, round the far side of Sgarsoch Bheag, before what was a steep rise to the summit of An Sgarsoch. As has tended to be the case over this way, views none too clear, so we soon set off for Carn an Fhidhleir, which was just beginning to emerge from the clag. A bit of hardwork up to the ridge then gentle stroll to summit, where there was the occassional view to the Cairngorms, heavy passing rainshowers, which we managed to miss, before heading back to the ruin and a now waiting swarm, or swarms of midges. 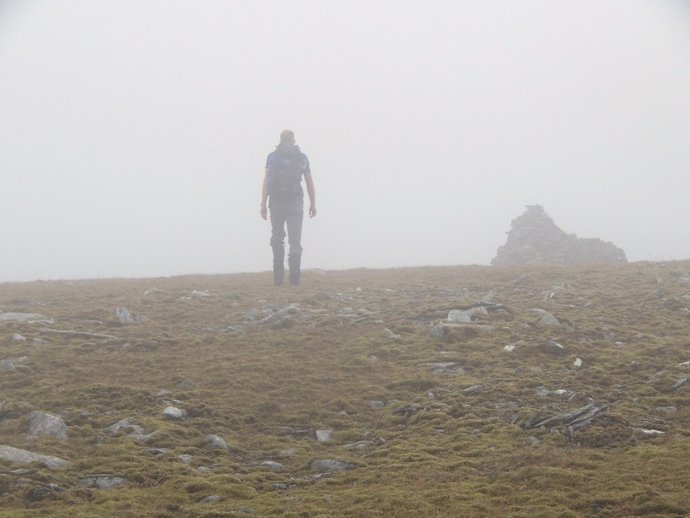 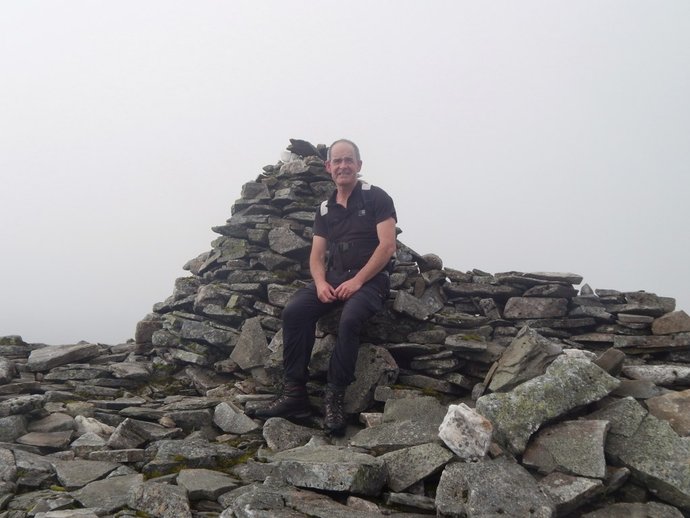 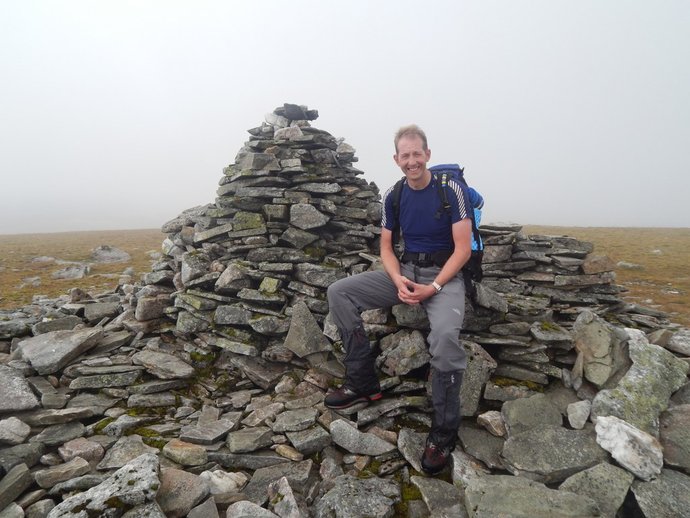 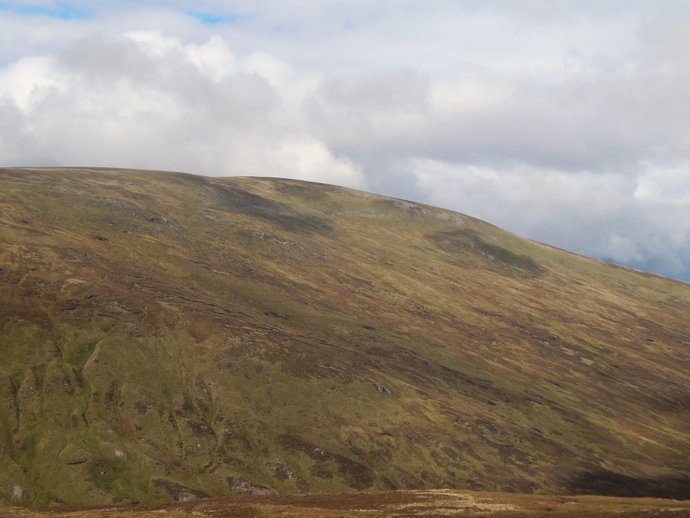 Over to another 'rounded' one, Carn an Fhidhleir. 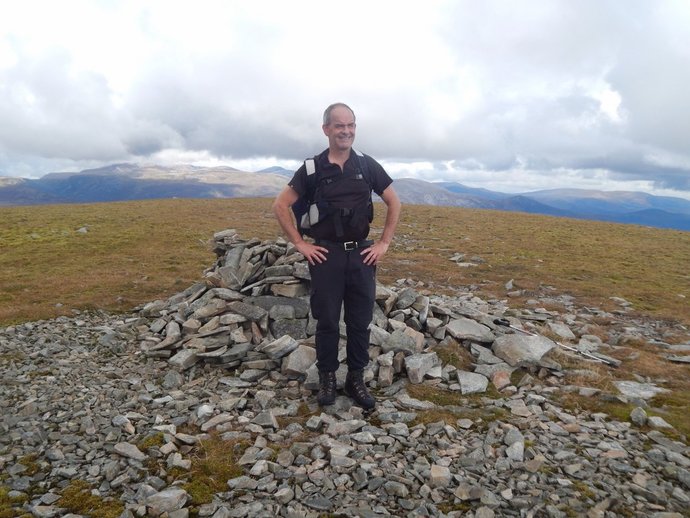 
Never, ever have I seen them as bad as this and I come from midge heaven, Mid Argyll. Anyone that believes these are unintelligent wee beastie’s, please explain how they are able to communicate our expected arrival time to midge’s from miles around! I set about changing back into cycling gear as quickly as possible, trying not to swear too loudly, or severely, in case my mum heard me back home. Meantime, I heard Steve hurriedly say he was going to have a look round the front. Aye, might be a bit of a breeze round there right enough, I thought, but what the hang, just get the job done now and get on that bike. 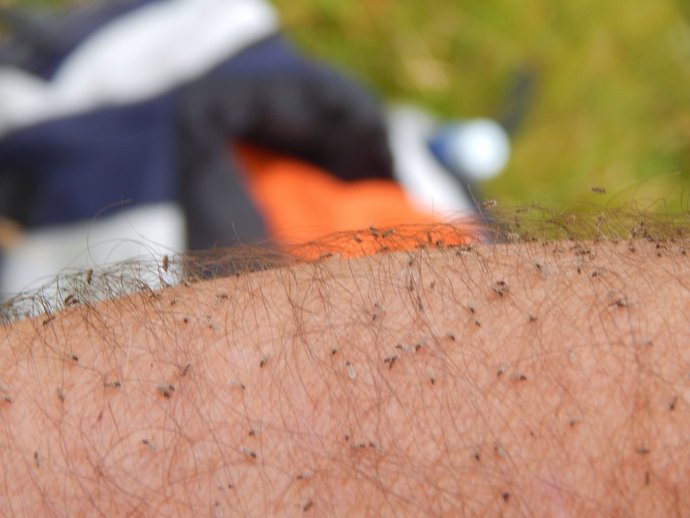 Still thrashing away at myself, I hopped on the bike and wobbled round the front of the ruin, hoping Steve would be just about ready to set off, too. Nope, no sight of him here, but there’s someone, yes, Steve already about a mile away, forded two rivers and still going like a bat out of hell, to quote the Meatloaf! Oh, how I chuckled at my naive anticipation of him changing into his bike gear, awaiting my getting ready. 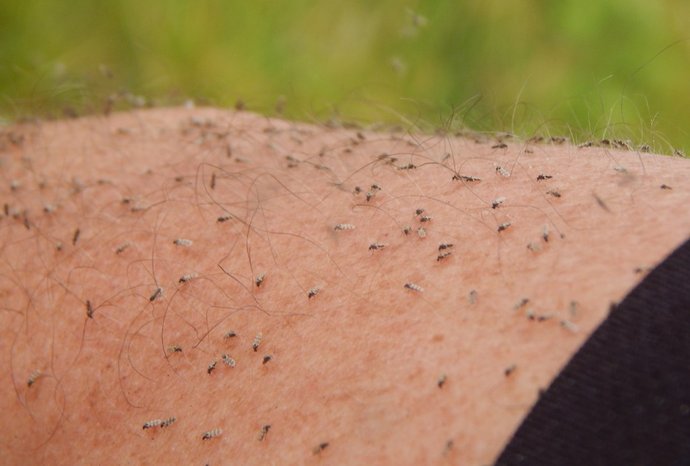 Anyway, he eventually slowed, then stopped, to allow me to catch up and we made our way back along the now damp road, to Lynn O’Dee, taking about 6 and a half hours. Another quick battle with the midges there seemed tame in comparison, as we then set off on the long haul back west. Not maybe the longest trip in hours, but in miles, even though fifteen done on bike, another tough day for Jimbo 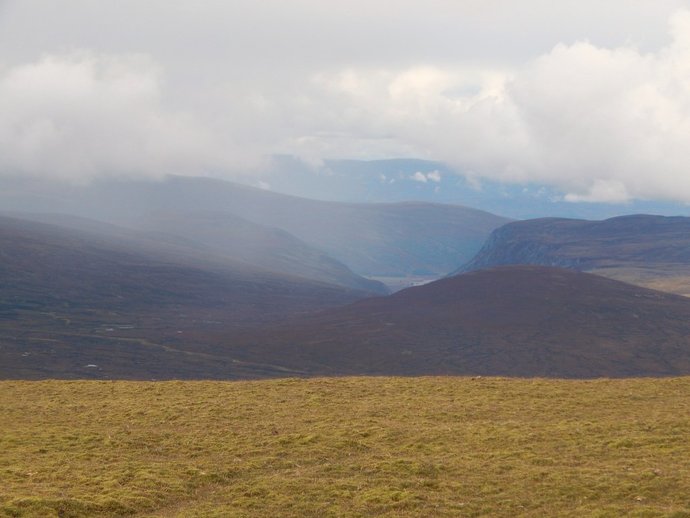 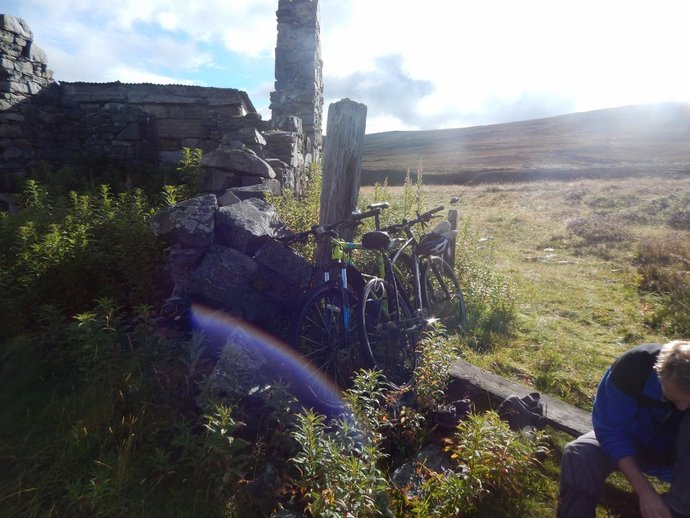 Site of the Great Midge Ambush. Up there on a par with the Godfather! 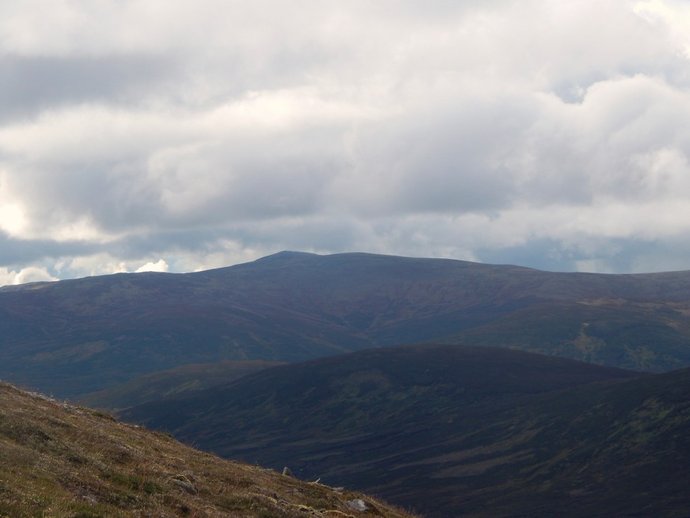 Distant view to Carn na Chlamain, where we'd been the previous week. 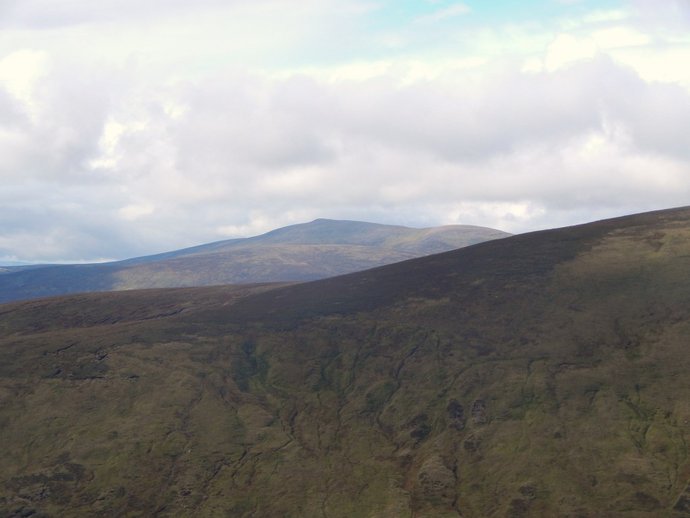 And just as distant, Beinn Dearg, 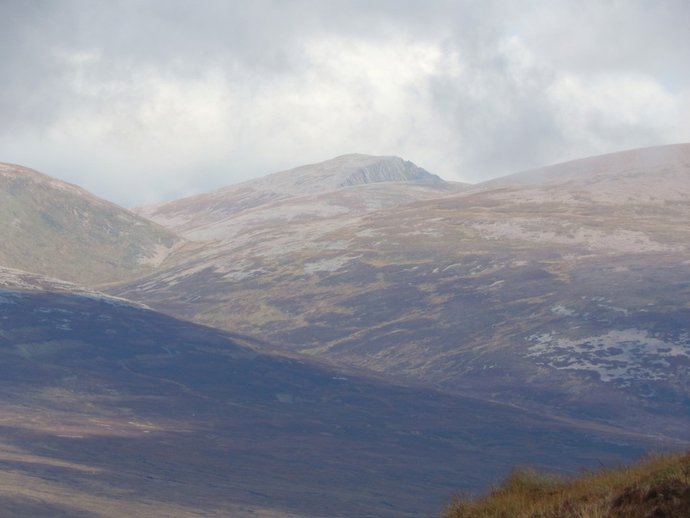 Wasn't sure what hill? 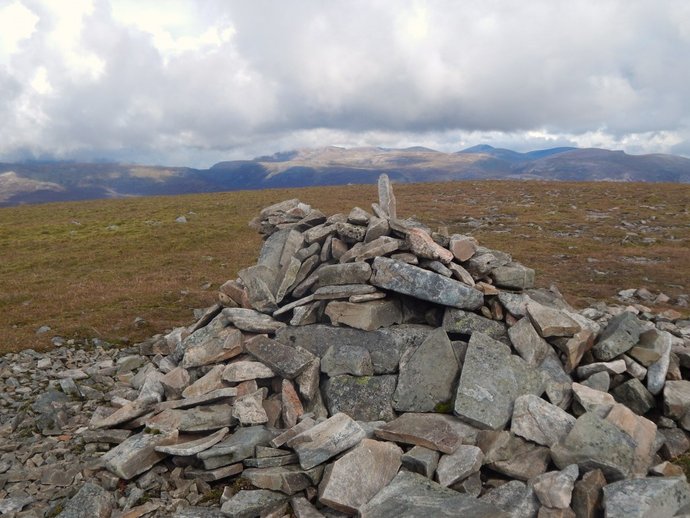 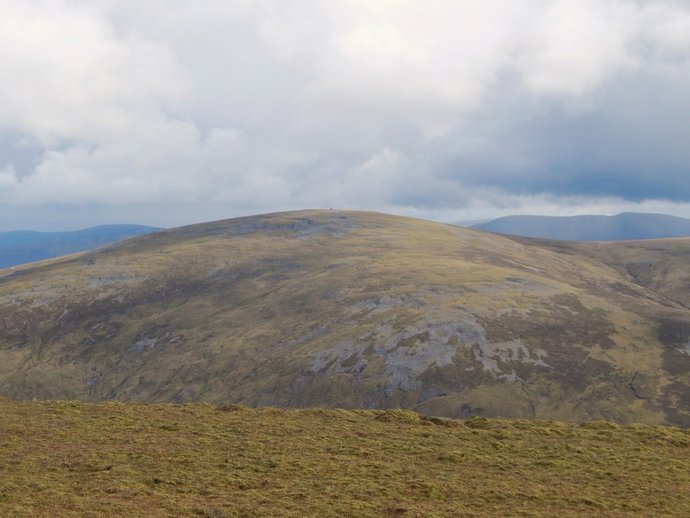 Looking back to An Sgarsoch. 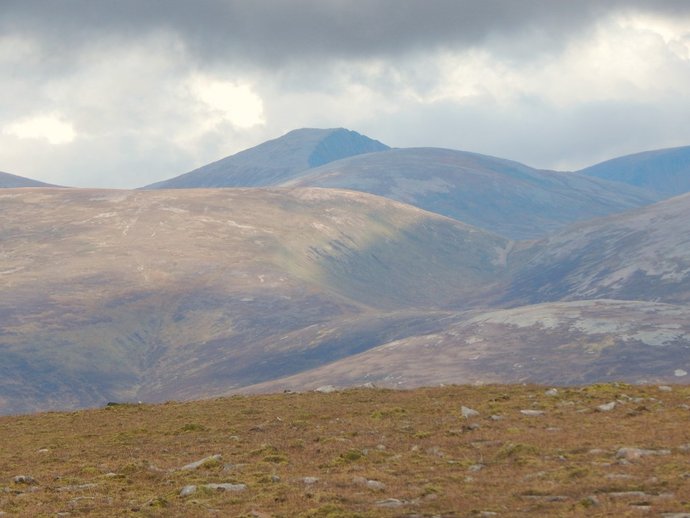 Which ones are they? 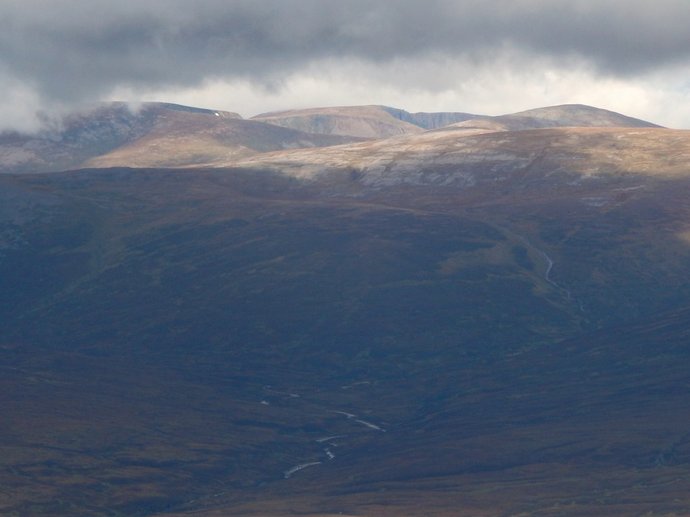 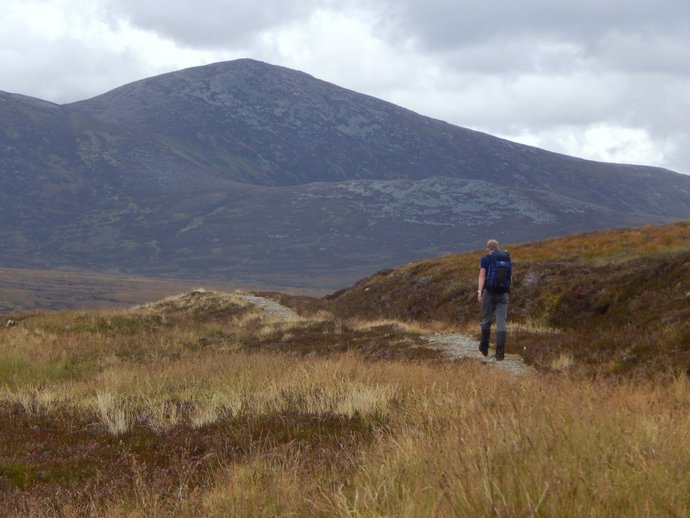 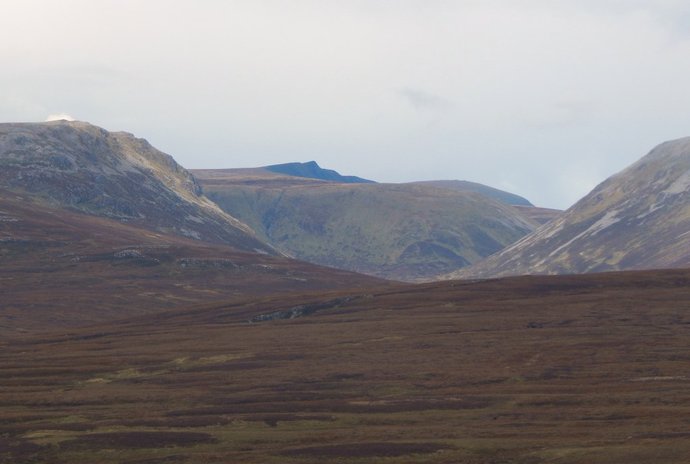 Wasn't sure of this might be towards Lairig Ghru?? 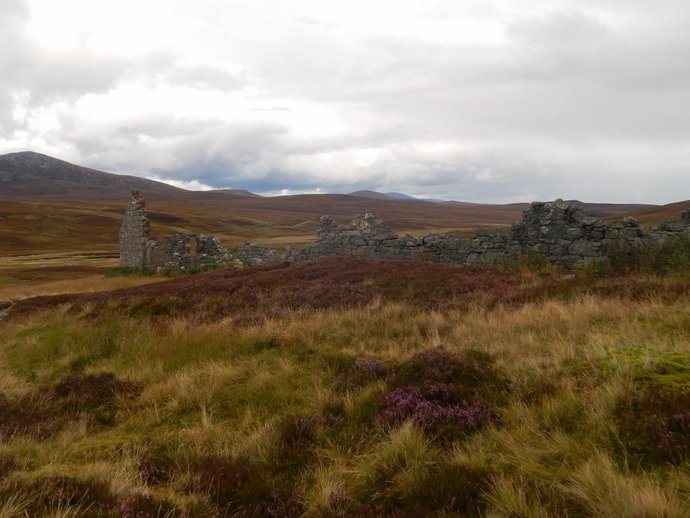 Returning to the ruin.