Another walk I seem to have omitted to do a wee report on. Rather ironic really, as it was my desire to one day be able to say "I've climbed Cruachan," which got me into this lark. Seeing it towering and spectacular looking in the distance, from many minor walks in Mid Argyll, gradually gave me the urge - and a wee bit of pushing and pulling from good friend, Jaffa, started me on that road! Yours truly, getting ready to head down to reservoir. Looking across to Bealach an Lochain, Meall Cuanail and Ben Cruachan.

I think I pretty much followed the traditional route, in a clockwise direction, but also threw in the Taynuilt Peak for good measure. Conditions were pleasant enough and got some good views, though a bit hazy. I remember being a bit apprehensive about crossing the slabs, but they were dry and didn't present too much hazard. I think it was just a wee bit tricky to take right path about Drochaid Ghlas, but otherwise don't remember any problems in that regard. Also, remember having a right mucky fall on way down, much to my chagrin and quickly trying to get to feet and look like nothing had happened. Cruachan and the Taynuilt Peak Over to Dalmally and River Orchy. 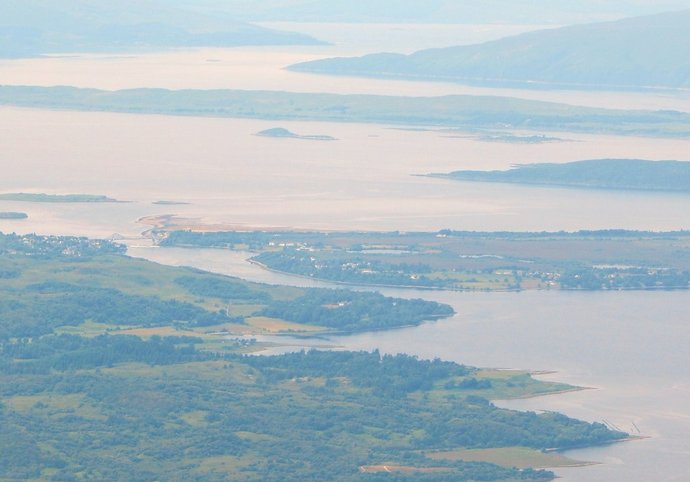 Out to Connel, Lismore and Sound of Mull. Along the ridge, out to Stob Diamh. 
So that was it. Seems like a trivial walk, but I remember a lot of sweat and tired limbs. I was chuffed to have ticked one off my bucket list, done it solo and it only took 54 previous Munro's as preperation! No point stopping at that, I guess. Over to ben Lui, Ben More and Stob Binnein. Looking down on the dam and Loch Awe. Love the little snow patches even at the end of June!

Glad you like the look of it and hope you get good day, if you get to go for it. Am sure you will love it too!
Jimmy

This is a ridge I've had my eye on for a while (the idea having been to do it in winter). I've seen it from afar, and noticed that it seemed to have a lot of character.

Alteknacker wrote:This is a ridge I've had my eye on for a while (the idea having been to do it in winter). I've seen it from afar, and noticed that it seemed to have a lot of character.

Thank you, Altenacker, I hope you get the conditions you are looking for and take care! Character it sure has I'm sure you know what you're doing

Good set of pictures of one of my favourite hills. Probably the hill that most got me into hillwalking with its watery views.

Revisited again, 13.10.16. This time taking route up Meall Cuanail. I remember passing two, young Australian lassie's, who looked a bit underprepared, in trainers and 'fashionwear.' One said they had a map, as the other said they didn't. Turned out the map was a bit of tourist leaflet

It was evident they hadn't pre-studied the route and weren't too aware of expected weather, of strong, cold wind, however they did seem to appreciate my advice that today would not be a day to do the ridge. They said they'd just take a wander round and have a look at the dam. Afterwards, I felt a bit guilty at leaving them to their own devices, but hoped the first real blasts of wind, would make decisions for them

In fact, going up Meall Cuanail wasn't too bad, until about 50 yards from the summit, when very quickly, the wind blasted from nowhere, to make it a not so nice place to be. It was hard to even stay still to take photo's, so didn't wait long before heading to Bealach an Lochan. Quite steep and rocky going down there. Fortunately, wind relented about half way up BC. It's awkward going over these boulders and gusts don't help much. Vis a bit variable at the top, so quickly dispelled any notions of going right round the ridge, but I had enjoyed the hike. Passed a family with a few kids on my way down. Rather them than me, but they all seemed confident and enjoying themselves. Came back via Coire Dearg and round the reservoir. Not sure what they were working on, at west end of dam? Down toward the slabs. On the summit, BC. Looking up to BC and the Taynuilt Peak, Stob Dearg,

Thanks, Somerled. That is Glensanda. or rather part of Glensanda 'Super' Quarry. Check google, etc for info.