May is Duke of Edinburgh Bronze season at school and it's been in full swing for the last couple of weeks. I was out a few days ago leading a training group of four boys and three girls on our usual bronze training grounds which make a circular route centered around Loch Ordie north of Dunkeld. I have done this bronze training route for the last five years and so know the route inside out and back to front. And so it was that a few months back, as I was exploring the new Sub 2000ft hills section on this magnificent specimen of a site, I discovered that for all of those last five years our campsite on the sun drenched shores of Lochan Oissineach Mor was in the shadow of the mighty 563 metre high Creag nam Mial. Imagine now my shock and dismay to find that there had been no recorded ascents of this mighty peak! I also recall a few years back, as I was doing the route in fairly typical inclement D of E weather accompanied by my colleague and friend Skyepilot2, that he said it was worth taking a little detour over the trig point at the summit of Deuchary Hill to the immediate south of Loch Ordie. He said that on a good day the summit opened up a whole new aerial perspective on our route. And so I hatched a plan......

Day 1 (Sunday) was dry but fairly dull. I had a feeling the Monday would be better and so I set my alarm for 5.30am with the imtention of making an early morning ascent of the virgin Walkhighlands hill on the doorstep. Right enough, it was already a sun drenched morning and taking just my compass, map and a breakfast bar, I quietly crept out of camp with Lucy tagging dutifully along behind. Needless to say there ain't nothing on Creag nam Mial that even vaguely resembles a path, so it was a case of trudging through deep heather for the kilometre and a bit to the summit.

Once up on top, there were three or four slabby areas that all looked like they could be the real summit, so I swung by them all. I guess the true summit was the one with a funny metal cylinder placed on top!

Keen to get back for some coffee and my space meal breakfast, I didn't hang about and headed back to the campsite. 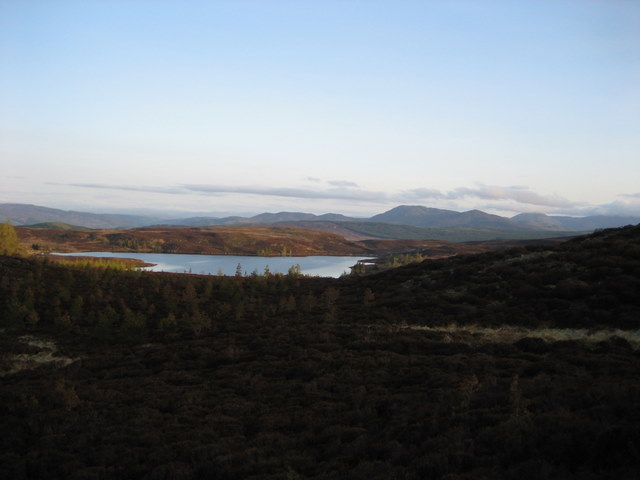 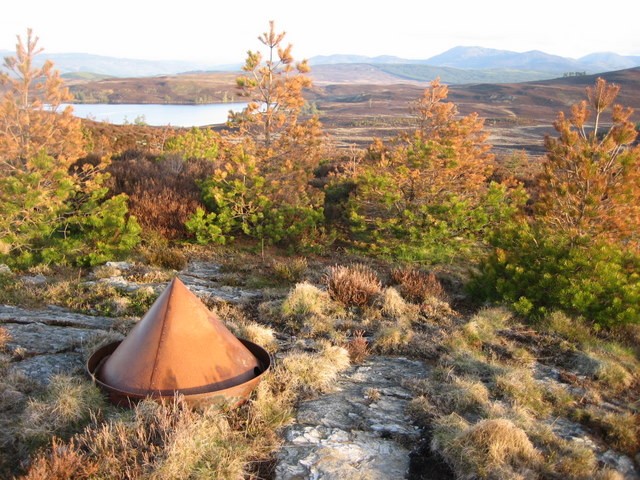 I should have brought a Union Jack to stick in the cylinder! 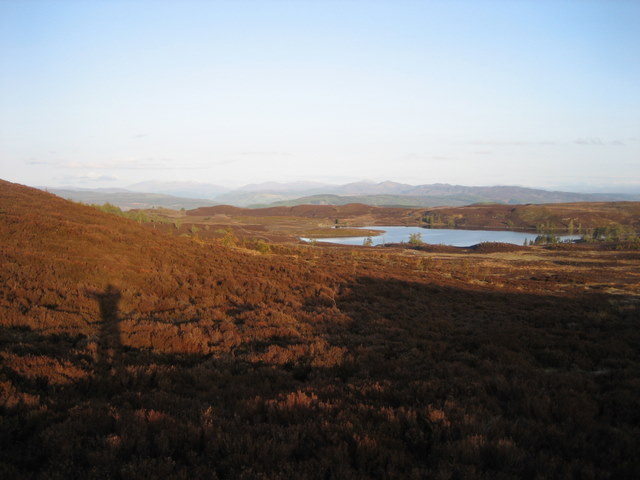 Now for Deuchary Hill. I allowed the group to take responsibility for navigating us back to the north west corner of Loch Ordie, where I gave them instructions to meet me at the Mill Dam, advising them that I would be on a different route. As they headed south west towards Raor Lodge, I nicked up the back of Lochordie Lodge and up onto Deuchary Hill.

If Creag nam Mial is a bit of a featureless heather covered mound, spiced up only by it's remoteness and rarity value, then Deuchary Hill is definitely a hill with a lot of character. Lochan na Beinne, just below the summit, is as special a place as I've come across on a little 500 metre hill. I don't know who was more surprised to see another human being - me or the bloke fishing in the lochan! Schiehallion from above Lochan na Beinne From the trig point the views were truly brilliant and I did indeed get a wholly different angle on an often walked and very well known route, before niping down the other side and swinging around the bottom of the Mill Dam to rejoin my group.

Re: B-sides and Rarities - Deuchary Hill and Creag nam Mial

Is there a circuit you'd recommend?

Re: B-sides and Rarities - Deuchary Hill and Creag nam Mial

Our normal bronze trainig route starts at the carpark behind the sawmill just to the north of Dunkeld. From there we head up the track (often quite busy with walkers, cyclists and vehicles) past Hatton and Birkenburn to the bottom of the Mill Dam, where we pick up the path which climbs above the eastern shore to the fork at 031472. From here we skirt round the southern and eastern slopes of Deuchary Hill to emerge onto the road past Grewshill and on past Riemore Lodge to the four way junction (not the most obvious to the untrained eye!) a few hundred metres due east of Loch Ordie. From here we head north up the track towards Creag nam Mial, but I guess your Loch Ordie route would turn west and go along the shore of the loch (either side) to emerge near Lochordie Lodge at the south west corner. This is now on our return route the next day, and we head south past Raor Lodge, Dowally and Rotmell lochs before making a right turn just before the Mill Dam and skirting the edge of Rotmell Wood, turning left at 017460 to emerge back near Cally Loch. To be honest, this last section is a bit dull and it's just so the kids don't end up retracing their steps back from the Mill Dam down the easy track.

I guess your route would make the ascent of Deuchary Hill an optional extra - all the paths shown on the 1:50 000 OS are there and in good nick. In addition, there is a faint but good path running south from the trig which emerges by the stream onto the path at 036479.

We also altered our route one year to take in the area west of Loch Ordie towards Guay and Kindallachan - I can't recall exactly how the route fitted together but there are some excellent paths in that area too.

I've got a few photos which I didn't fire up in the report if you'd be interested in using them in a route description, although my coverage is a bit patchy (having done the route almost to the point of boredom and with there being kids around a lot of the time I tend not to take much photography).