Meall na Teanga, Sron a Choire Ghairbh.gpx Open full screen  NB: Walkhighlands is not responsible for the accuracy of gpx files in users posts
Another difficult walking day according to MWIS. Today’s headline for the Cairngorms NP and Monadhliath was severe upland gales easing slowly, occasional rain, and snow on higher areas.
Originally I had planned an overnighter in the Western Cairngorms, but having learnt a few things about weather in the Gorms over the past two days I happily postponed that trip until better conditions would arrive. Meall na Teanga and Sron a’ Choire Ghairbh would do for today and MWIS said it would be less windy over there anyway.
The 5km walk from Kilfinnan to the start of the uphill route is perhaps the longest 5km I have ever done. The hillsides are steep and tree covered which make it impossible to spot the Cam Bhealach from below. I started doubting myself. Had I somehow missed the signed turn-off? But I hadn’t and once there it was clear that missing it would have been quite an achievement. 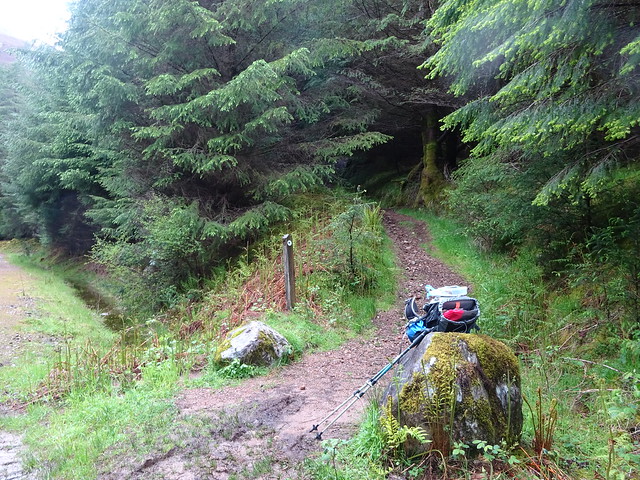 The path through the forestry is very pleasant. Very lush and yet dramatic with the Allt Glas Dhoire roaring below. Once out of the trees the path climbs steadily to the bealach. There was a group of 3 walkers ahead of me, which helped with a quick ascent. I caught up with them just before the bealach. They would just be doing Meall na Teanga today as for one in the party it was their first munro.
A bit further I caught up with a French couple who were walking to Gairlochy via Gleann Cia-aig. We had only had a short chat. This was not a great place for socialising as there was no escaping from the wind. The zigzagging path up Sron a’ Choire Ghairbh was great, making the ascent easy going. It stops a short distance from the bealach. As the cloud was down I made a mental note of the surroundings in the hope that I would remember where to drop down on the return leg. The continuation to the summit was uneventful. It was sheltered and there were just a few snow fields to cross. Conditions were quite unpleasant on the summit with the cold wind, so the visit was only short. 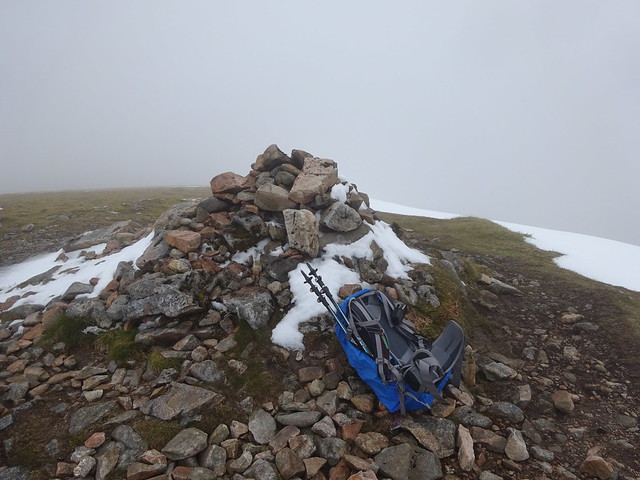 With the help of the compass I got down to the bealach and found the path easily enough. Again, I enjoyed the zigzag path very much, the descent was never steep. 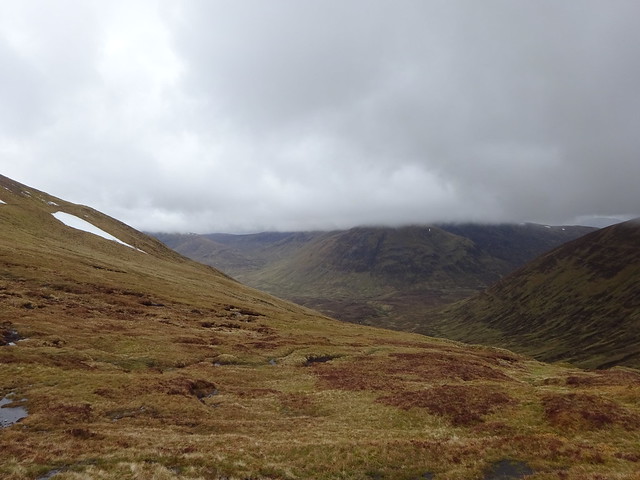 The bealach was pretty boggy, just like the lower slopes of Meall Dubh. Things improved slightly towards the next bealach. The route up the NE slope through the cornice didn’t look very appealing, though the group of three I had met in the morning clearly disagreed as they were descending that way. I on the other hand traversed west below the steepest slopes along a faint path and then ascended up the pathless NW ridge.
A path did materialise higher up which made finding the summit a lot easier. Again, the conditions were not very friendly, so I left the summit swiftly. 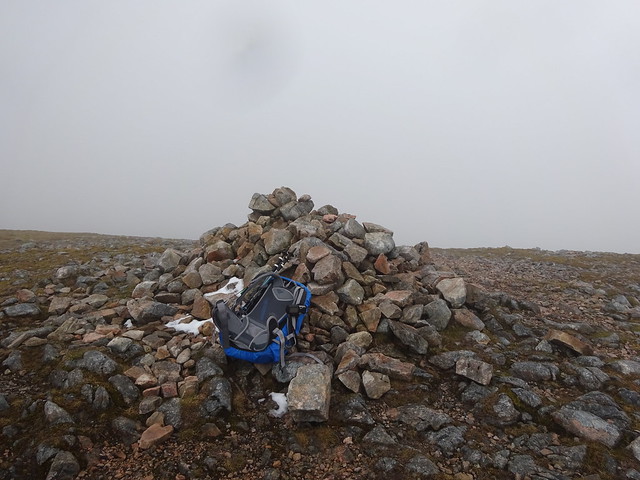 On the way down I had a look at the possibility of descending through the cornice, but I couldn’t see past the edge, so that was a no-go’er. The weather made for a quick descent and it was only once back in the sheltered Cam Bhealach that the pace slowed down a bit. 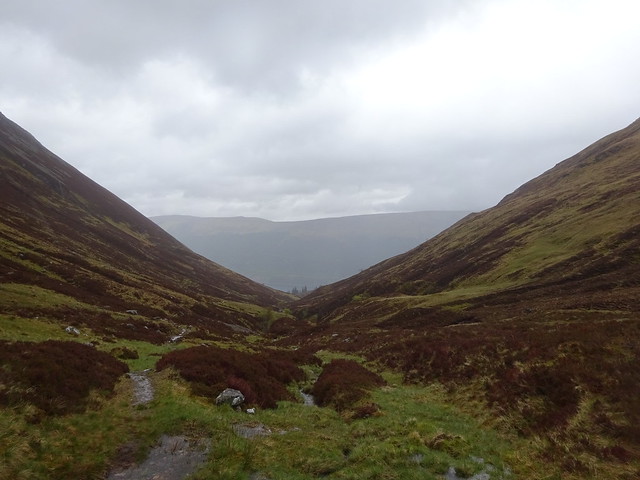 A leisurely descent with the Allt Glas Dhoire roaring louder and louder the lower I got. 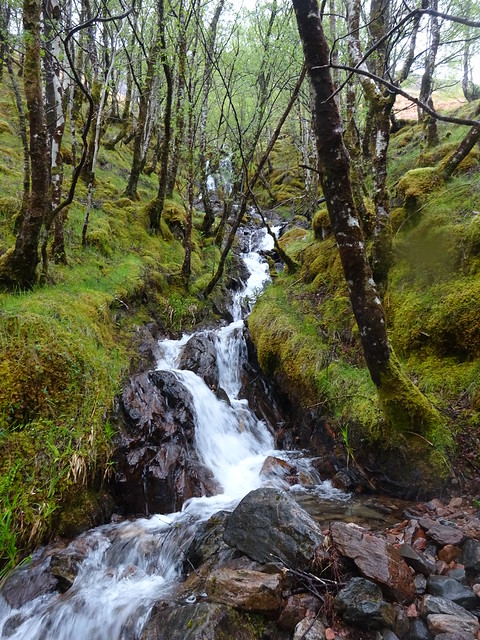 Burn coming off the hill

Funnily enough on the walk out along the forestry track, time passed much quicker than on the walk in. Usually it's the other way round!

Nice one Silverhill. These 2 were among my first hills. I missed the turnoff once on my bike while day dreaming

I think some people find these hills a bit boring but I've been up a few times and it has always been a good day out. I wonder how the French couple got on, the route from Cia-aig Falls is a good route also but the last time I was there it was a total disaster with fallen trees blocking the path. There's also a new hydro scheme which has made a bit of a mess.

Sunset tripper wrote:Nice one Silverhill. I think some people find these hills a bit boring but I've been up a few times and it has always been a good day out. I wonder how the French couple got on, the route from Cia-aig Falls is a good route also but the last time I was there it was a total disaster with fallen trees blocking the path. There's also a new hydro scheme which has made a bit of a mess.

I’ve seen some fantastic pictures of these hills in other reports. Sadly my photos don’t do them justice. The French couple looked very miserable when I met them. I tried some humour (‘Lovely day for it!’), but I think that went completely over their heads. Let’s hope for them the Glen Cia’aig route had improved since you did it last.

Thanks ere1! I’m glad my clagged-over pictures are met with such enthusiasm!

These are nice hills though and on a clear day the views towards Ben Nevis and Knoydart must be fabulous.