Ben Chonzie.gpx Open full screen  NB: Walkhighlands is not responsible for the accuracy of gpx files in users posts

Today's Hill was supposed to be one of the more uninspiring Munros to be completed, Ben Chonzie.
The predicted weather forecast from MWIS was worse than the previous day with a 0% chance of cloud free Munros with wind speeds of up to 45 MPH and snow showers.

I was going to leave early and try and get ahead of the weather, but i was not confident. I left Edinburgh early and arrived at the car park at Coishavachan at about 0730 Hrs.

I did want to be the first on the hill again this morning but as I was getting my gear ready another car turned up and its occupant jumped out and started away up the track, oh well second on the hill today. I set out and the weather was just as described, pants. There was nothing to report for the first few Kms, passed the cottages, turned left through the gate and follow the track over the bridge through another gate and up to the small dam. Couldn’t see much of the track due to the snow but it was just a case of following the other footsteps, or so I thought until I realised I’d gone a bit too far as you can see from the GPX file

, obviously not everyone had done just Ben Chonzie, Oh well, time to practice some map reading, took a bearing and off I went. The upside was that the weather had taken turn for the better. Had some great views, I just hoped it would last. Panoramic shot on the way up.

Really enjoyed making my own tracks up the mountain. Got to a bit of a crest and there was a dark brooding sky with the first of the fence posts highlighted against it.. It was just a case of following the posts all the way to the top. 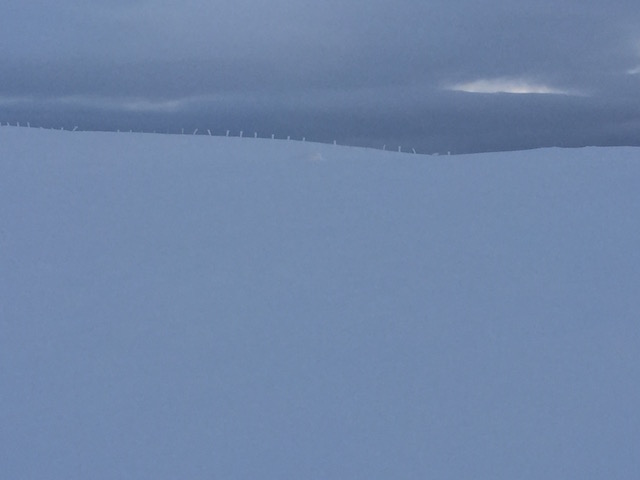 Fence posts against the dark sky. Just a bit of ice on the fenceposts.

I was extremely pleased that the 0% chance of cloud free Munros turned out to be completely wrong and I got some stunning views. Wind really picked up near the summit, cracking views though.

As I was approaching the cairn I bumped into the walker who had beaten me to the top and he was as surprised as me to get the views that we did, had a quick chat and went on our ways. Made it to the top in good time, I didn’t hang around for too long as the wind had picked up and the wind chill was beginning to tell, a couple of photos and a mars bar and I was off again.

View from the summit. I retraced my tracks back to the corner of the fenceline line and then just straight lined it back to the path on what looked like the easiest route. The path on the return leg.

The track on the way down was uneventful and I just passed about half a dozen or so others. Just as I was getting back to the dam the weather closed in and the snow showers started. All up, three and a half hours.

I thoroughly enjoyed Chonzie, and not sure if it was the snow that made it a great day out or not, but I would definitely recommend it with a bit of snow on it.

Unfortunately back to work for me, so no more hills for me until April when I am planning a couple of long distance walks around Glen Nevis.

Chonzie a fine winter hill especially if you get views from the summit. Better check the date you climbed it though

Sorted, time travel is not yet a reality.