Headed to Pitlochry today with the aim of going along the Bealach na Searmoin. Parked up at the Ben Vrackie car just in case there was a lot of snow up there and I ended up having to choose a different route, and set off at around 10:45am making good progress and soon we could see Ben Vrackrie looking very pretty covered in the snow. I'm sure it would have been very nice up there on a day like today, but tackling snow covered hills is not for us so we stuck to our lower route and just had to settle for the views from a lower altitude...which I have to say I don't think were to complain about at all! The route was well signposted and easy to follow on a wide path, I kept an eye out for sheep but there was no sign of them (though I did see a deer hoof-print in the snow) so once through a gate I decided it should be safe enough to let the dogs off. Though they were more interested in a different kind of white thing, the few patches of snow that were lying around! 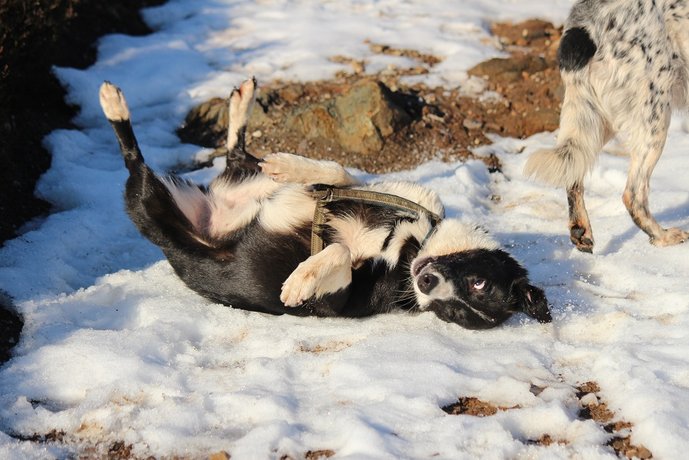 There were a few other people going along the route, not surprising as it was a very nice day to be out today, if it wasn't for the snow on the hills it would have been hard to believe it is early February! The dogs had great fun running around while I kept an eye out for hares and other wildlife, as well as for sheep just in case there were any around. I did see a few grouse, ravens and a group of seven or eight buzzards in the distance but that was about it. One of the buzzards against a snowy landscape

The path did get a bit muddy in places - not really surprising though, but my feet stayed dry and the dogs don't care about getting covered in mud. Though I think Moss felt a bit stupid after splashing across a ford and then watching as me and Millie did the sensible thing and crossed using the nearby footbridge! The views were better on the other side with snowy hills in the distance and the path winding out in front of us. 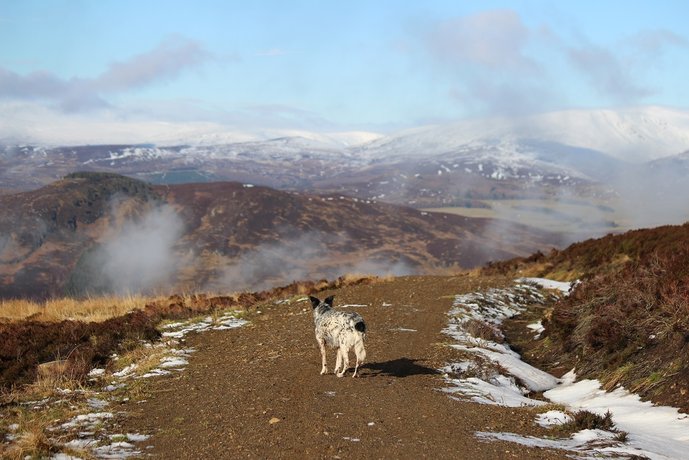 As we descended I saw the sheep all gathered in enclosed fields close to the farm below and put the dogs back on the lead, and I also had a bit of a panic when I watched the walker ahead of me check a gate and then climb over a stile next to it, a stile that had lots of steps and sheep not far away. I had visions of me trying to get across with the dogs, but when I reached the gate I found that it could be opened after all - phew! Not that having to walk back the way we came would have been a great tragedy, I was enjoying being up there, but it is nice to be able to do a circuit! There was another fun gate that I had to lift to get it open so the dogs could get through. Though considering Moss can jump at least 5 foot, it shouldn't have been a problem for her! There were lots of gates going through the farm, and I was amused by this at the final gate: Not easy closing some gates though (especially ones that need lifting!) but I always make sure to close gates as best as I can! I remember a walk I did in Yorkshire, there was a gate but it was open and I went though, got halfway up the field and decided the gate being open just didn't feel right so went back and closed the gate. Next gate was open - so i closed it, and the same for the next...I was starting to wonder if there would be a very cross farmer around but when I reached the top of the hill I looked down and ahead of me was a couple who I watched go through a closed gate...and didn't bother to close it again and didn't bother closing any of the gates they went through. You'd have thought closing a gate was rocket science to some people...

But back to my walk, all gates passed through and properly closed (even the one that needed to be lifted up to close it). There was a stretch on tarmac to get down to the NTS Visitor Centre (closed at this time of the year, but I did notice that when open they let dogs in!) so we followed the route down to Soldiers Leap. At this point there is a change to the route, the bridge that goes over the burn near the railway viaduct has been washed away and though the notice said there were stepping stones to cross I couldn't see a good way of crossing, so we headed back up to follow the road. There is a signposted diversion that goes round, but rather than staying on the road I decided to take the Pass of Killiekrankie route instead, which turns off around a third of a mile along the road (signposted to Moulin, which was great because that is where my car is!).

it is a forestry track, and with trees all around there wasn't much of a view from that route, especially when the sun was shining right in my face most of the time, but at least the dogs could have another run off the lead and go jumping in puddles...of which there was a lot... We followed the road, spotting a hiding arrow when the path forked and then just after the turning to the summit of Craigower there was a path off to the right that led down and around the golf course. It was clouding over a little bit at this point, but we stayed in the sun! I'm thinking I maybe should be putting suncream on, I have been sunburnt in Scotland in February before after all! Soon it was back onto roads back up to the car park. The diversion shortened the route a bit, but Moss was getting tired anyway and it left plenty of time for getting something to eat and nipping into Hawkshead to get a jacket I had seen last time I was in...and another jacket that looked like it would be good for warmer rainy days...and some socks that were on offer...now I just have to make sure the dogs don't go putting any holes in them! Walkreports with happy dogs in them are winners at all times for me.

jacob wrote:Walkreports with happy dogs in them are winners at all times for me.

I had one not-so-happy dog at home though, think it will be a short trip for tomorrow so she can come along!