I think the week 22-28th of February will be quoted as one with the most glorious weather ever during a winter. Specially the weekend has been something to remember!

But the facts here reported didn't take place during the weekend, but during a enjoyable stormy wednesday...
I had been looking at Sandwood Bay for a while. The remoteness of the place had been calling me since long time ago, and the moment to tackle it had arrived.

We set off from Inverness at 8,00 am. Our idea was to drive all the way up to Kinlochbervie through the A838, which has a couple of memorable spots for pictures. I had never driven through that road in winter, and although there was a warning for ice and indeed the road was icy, it felt perfectly alright. We spent the whole journey delighted by the scenery of the Mighty Winter Highlands. Some picture here:

On the A838, looking back over Loch Merkland 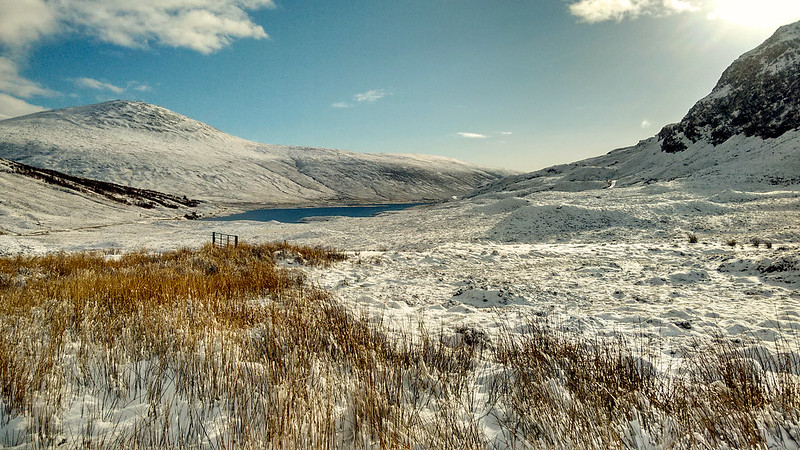 From the A838, Loch Stack and the mountains in the background 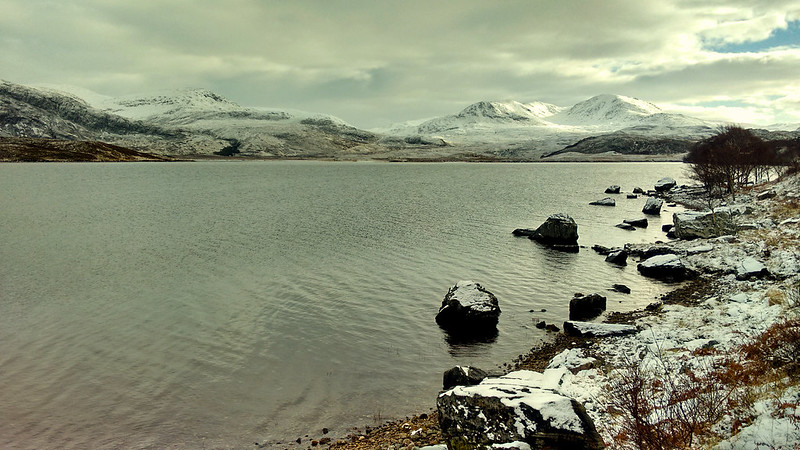 Two shots of what I think is one of the most photographed spots in the Highlands. Arkle, the house and Loch Stack. Arkle was looking impressive! 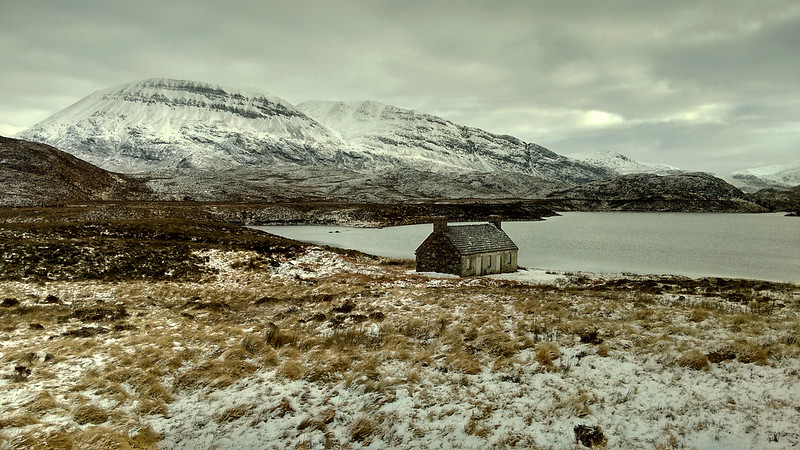 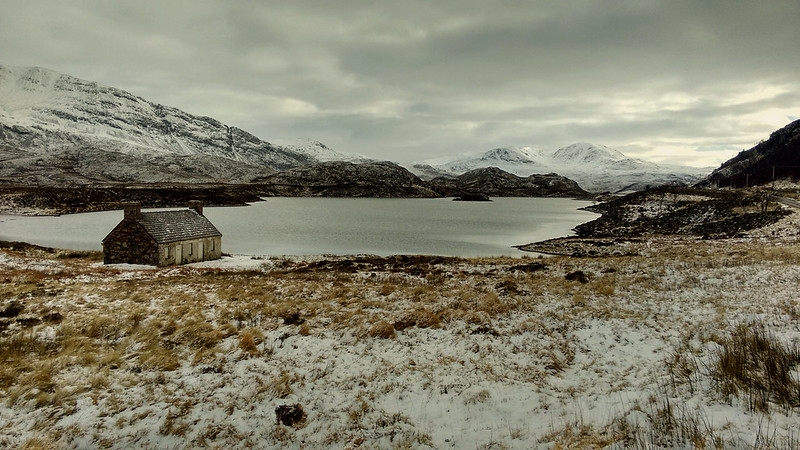 From here, we decided not to stop again until the beginning of the track in Blairmore, after Kinlochbervie, otherwise if we kept this way we wouldn’t manage to complete the walk!

Car parked, time to go! Some stormy clouds made the sky over Blairmore where the track starts, quite dramatic 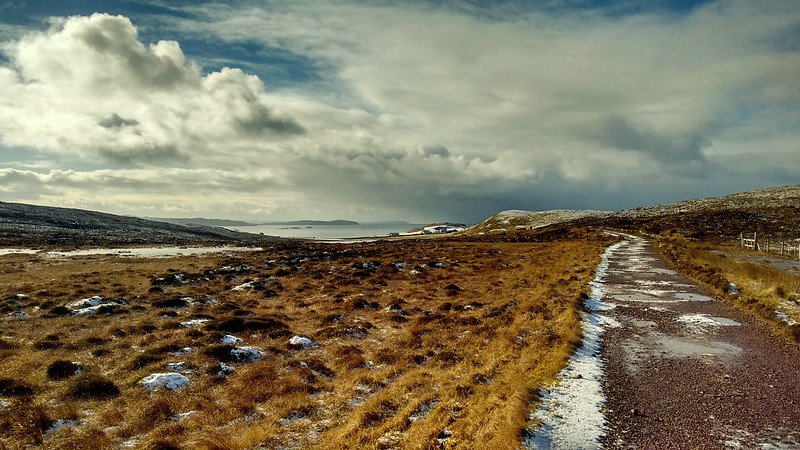 The track was good, quite flat and easy to walk, therefore we made great progress quickly. Someone could say that the area is quite featureless and bleak, and in some way it is true. However, what I would highlight is the feelings of remoteness and solitude that the place evokes. The low-lying snow and the hills in the far distance added to it.

Foinaven, Arkle and Stack in the far distance 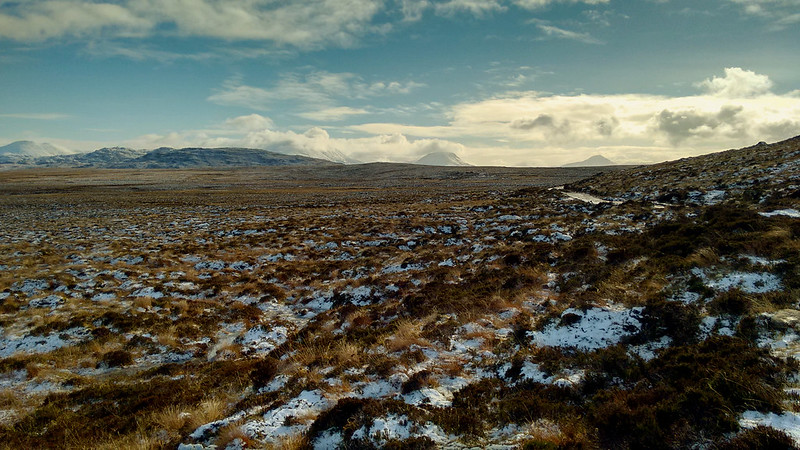 Desolated moorland and snow-capped hills in the far end 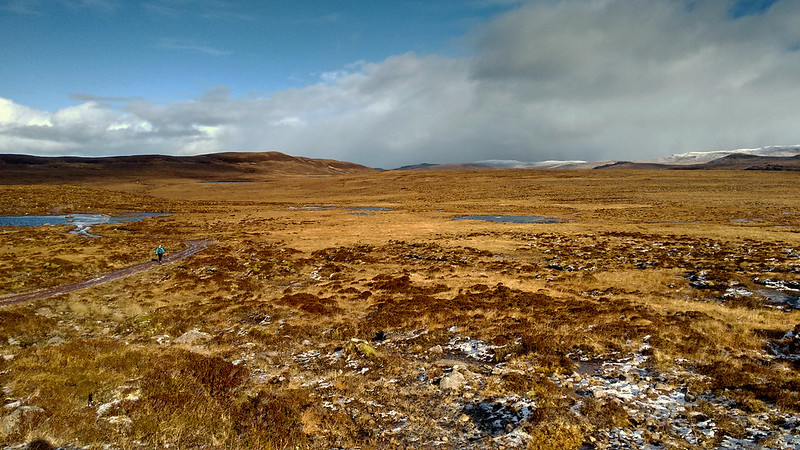 Approaching one of the many lochs on our way, Loch Clais Nan Coinneal 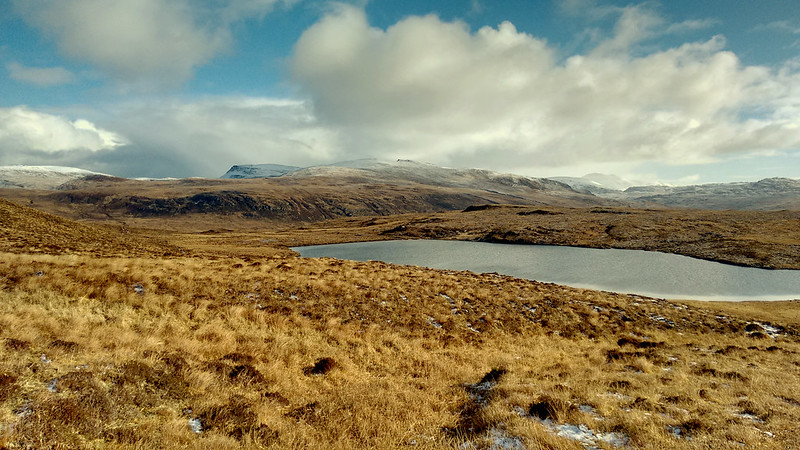 Once we reached this little loch called Loch Clais Nan Coinneal, we decided we could turn left, leave the path and climb the little hill in our back, lying on the left hand side of Sandwood Bay (called Druim na Buainn). The views from there over the beach could be the best ever, and then we would try to find some route to descend down to the beach between the cliffs. We didn’t know for sure whether this would be doable or not, but there was not much to lose…

The views started opening for us 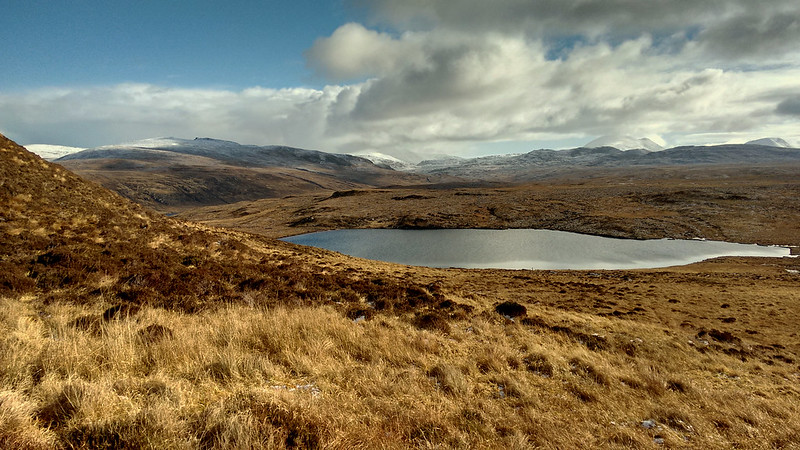 Already on the summit (or rather the “plateau”), we weren’t able to see much. However, we were able to see what the Atlantic Ocean wanted to gift us with. A snow storm was rapidly approaching us from the sea and sweeping and swallowing everything in its way. What previously had been a calm and sunny day, suddenly became a dark furious snow blizzard with no visibility at all. Before that, I managed to take a couple of pics.

Looking west from the top of the hill 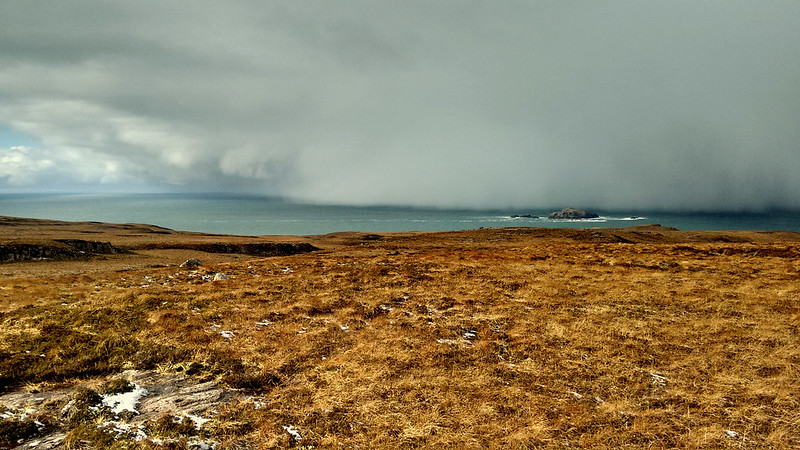 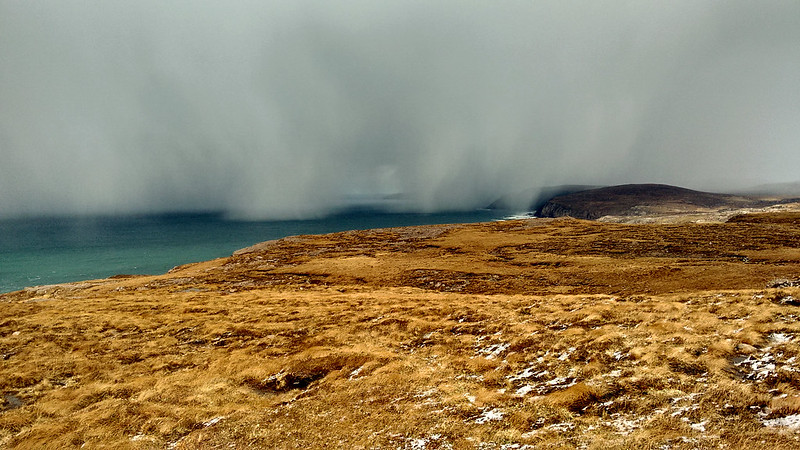 Looking east over Sandwood Loch and the hills of Cape Wrath 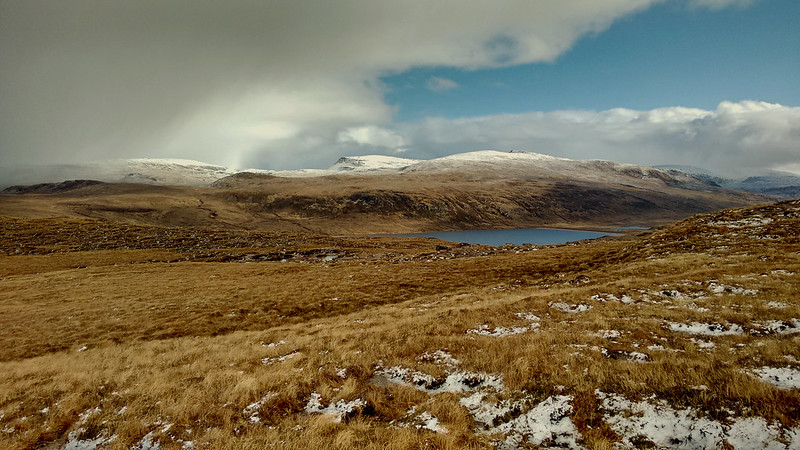 In a few minutes we were completely eaten by the storm. We didn’t even bother looking for a shelter as there was absolutely nowhere to hide. Rather than that, we just surrendered to the wild weather… Wore our waterproofs, gave our back to the wind and just enjoyed! It doesn’t happen every day or everywhere that you find yourself under such conditions!

As always in Scotland, if you don’t like the weather, just wait for 5 minutes… That was my hope, and so it happened! The storm didn’t take very long to sweep all the land over, just left our backs covered in white and disappeared. And in front of us, the views we had been looking for. 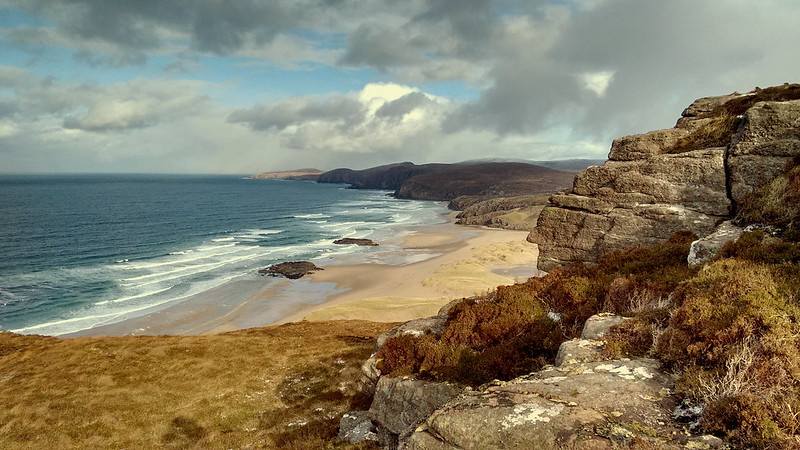 Me, soaking in the scenery 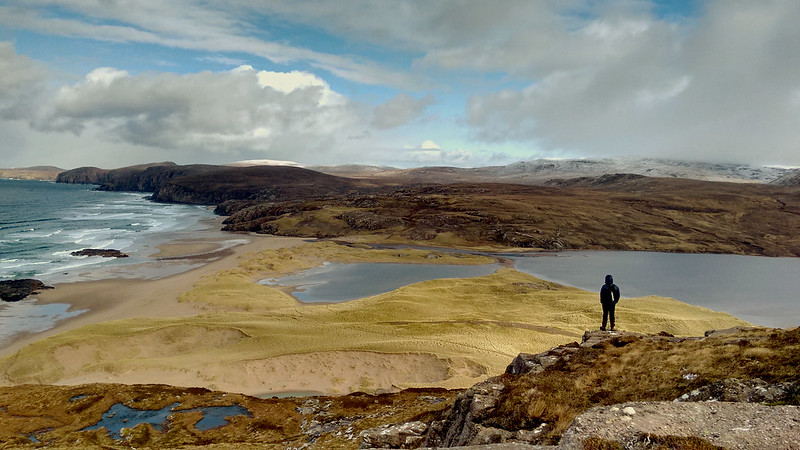 One more shot of the beach 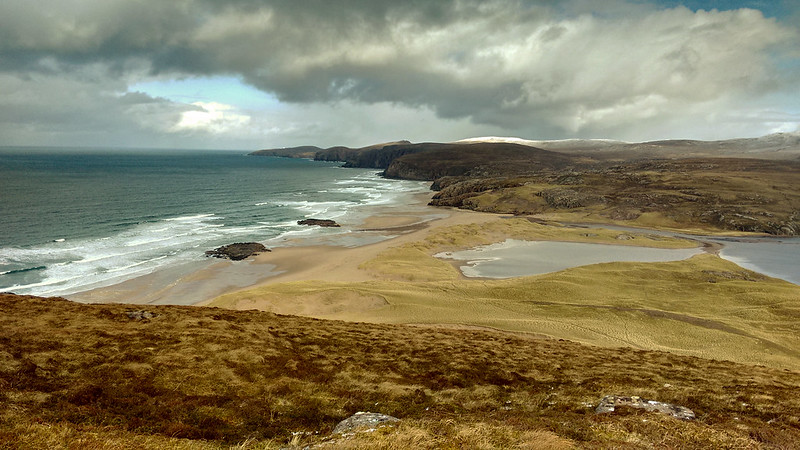 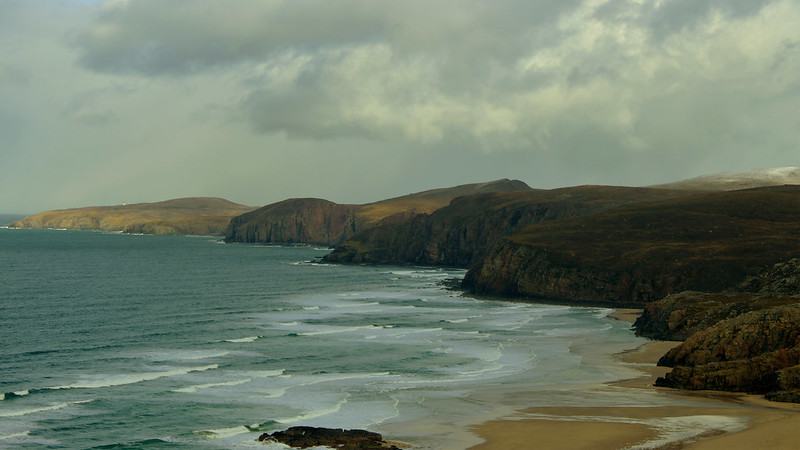 After some time absorbing the energy of the place, we tried to find our way down to the beach descending through the cliffs. It seemed doable, as I could see at least two steep gullies that may be used as a route down (as they finally were). Although there was no path whatsoever, it turned out as an affordable and intuitive route that leads you to the sands, but requiring care in some parts for being steep and having some gravel. Actually the lower gully seemed to be trodden, so possibly it is a route that people sometimes take, or it might have been done by sheep. Finding your way down the cliffs with the scenery in the background makes it so enjoyable! It adds a lot to the day, in the sense of views and in the sense of adventure (let’s face it, the main path is so easy!). Totally worth it.

Finding our way down to the beach 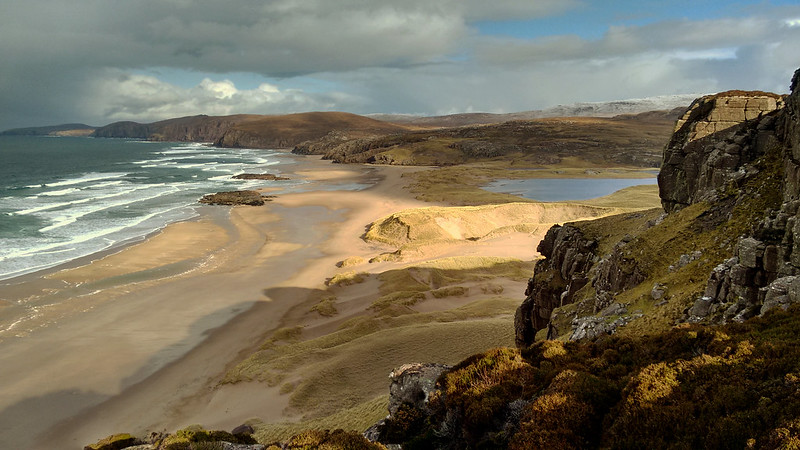 Gully we needed to walk through before reaching the sand 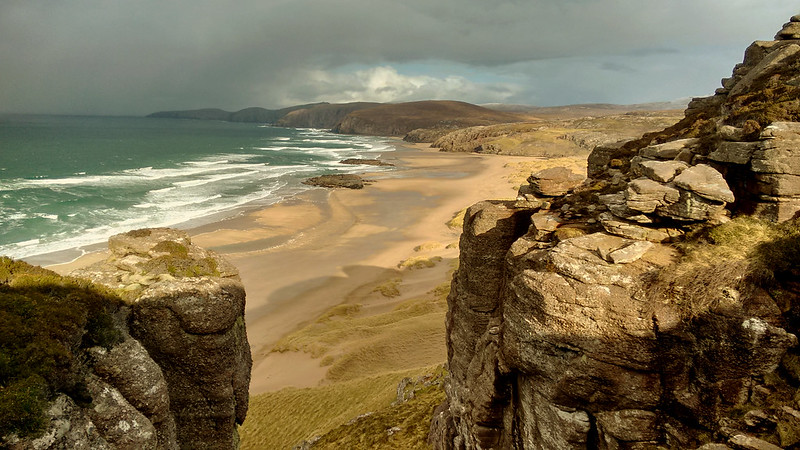 This is where you touch the sand 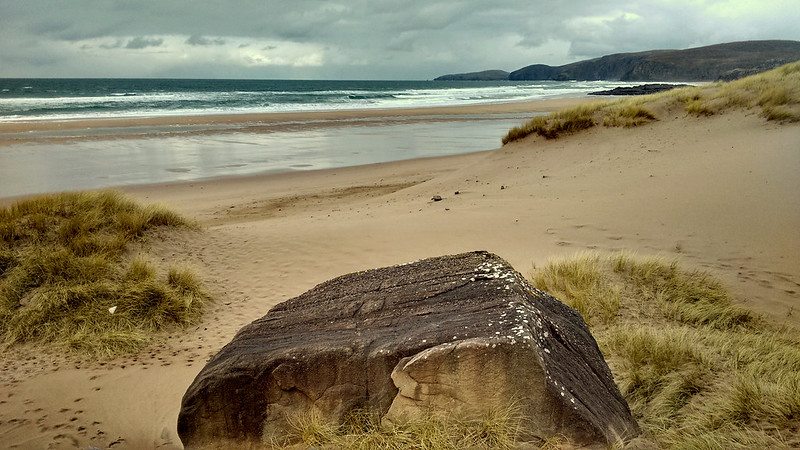 Once on the beach, the adjectives that came to my mind were: wide, extensive, huge, open space. It just feels like a massive theater and you are so insignificant in the middle. We walked the beach all along, stopping in the rocky outcrops in the middle and getting to the river at the end, which we didn’t cross because didn’t feel like taking our boots off and also we were quite short of time.

Looking back to the cliffs we descended 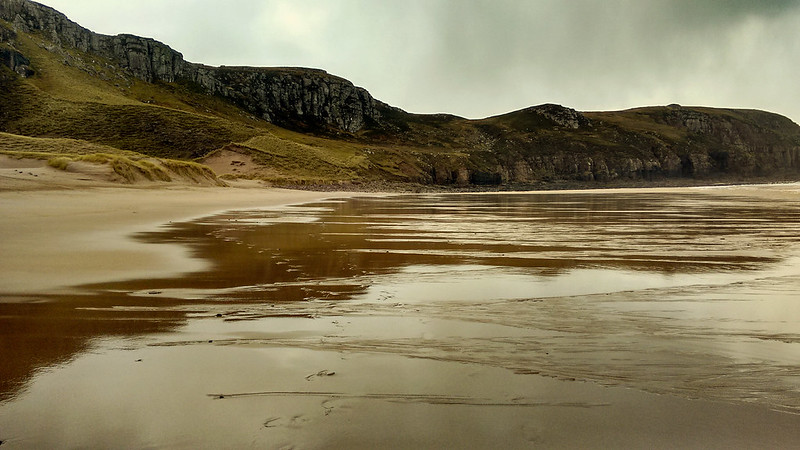 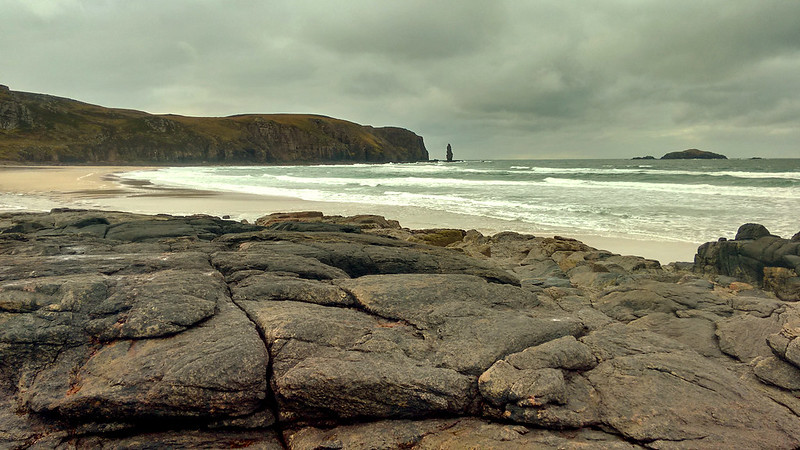 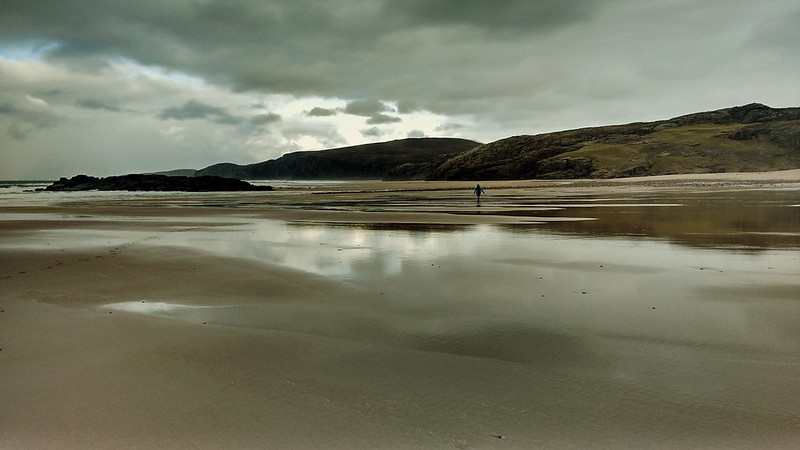 Another amazing feature of this beach is the dunes. They hold very curious shapes and hold unique vegetation. They also look quite stunning on photos 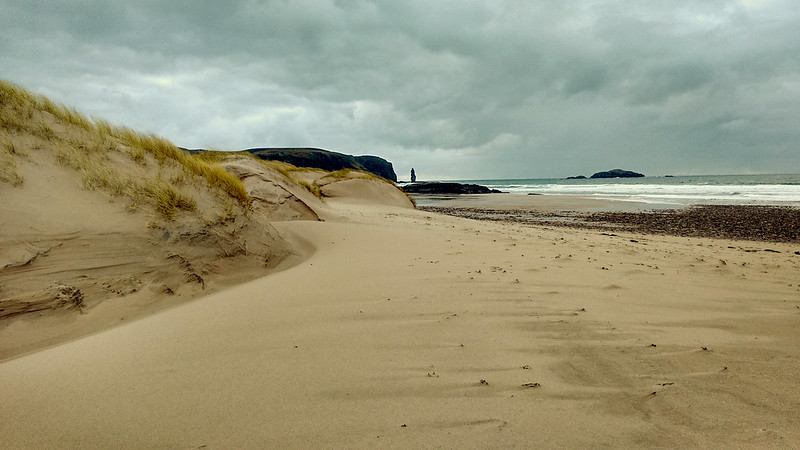 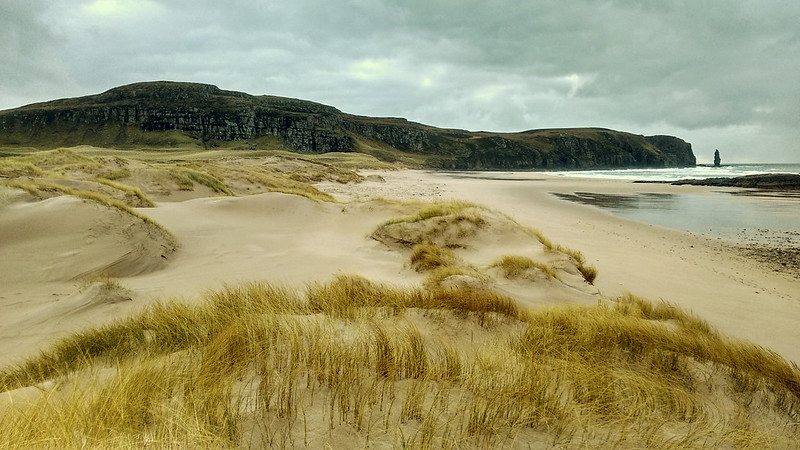 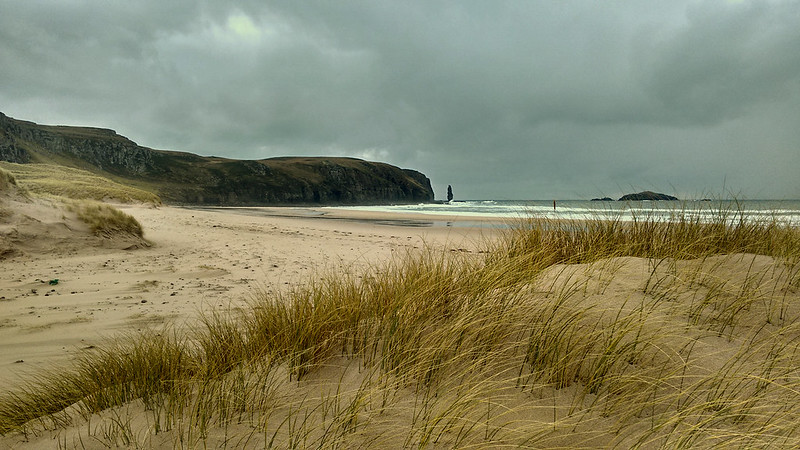 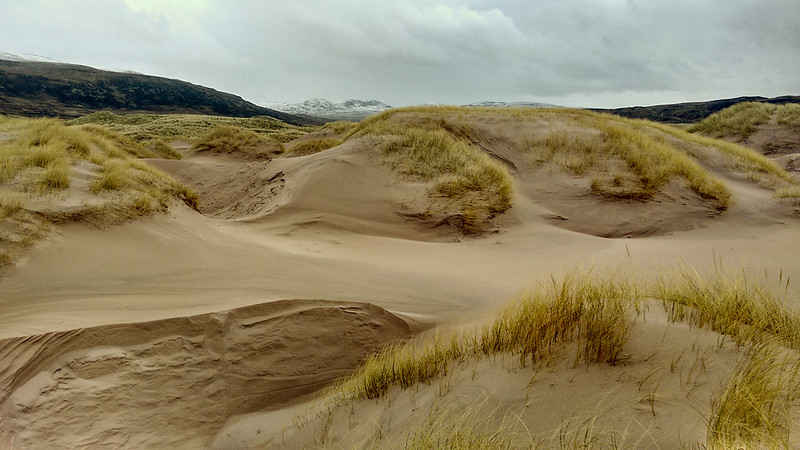 We were having a great time, but it was time to go… It was getting late, we still had to walk all the way back to the car, drive aaaall the way back to Inverness, and I wanted to stop in a few places in the way… Oldshoremore Bay, Scourie, Kylesku Bridge, foot of Quinag and Ardvreck Castle was the plan… No way!

Our first stop was Oldshoremore and its beautiful beach. What a picturesque setting and what a pretty bay! It was getting dark so we couldn’t wander around the cliffs as much as we’d like, but had time to take a couple of shots. Next time! 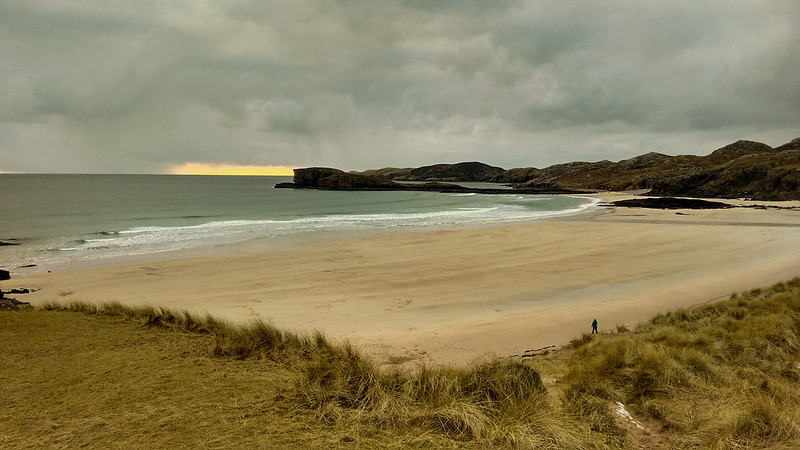 Apparently this rock is called the frog… 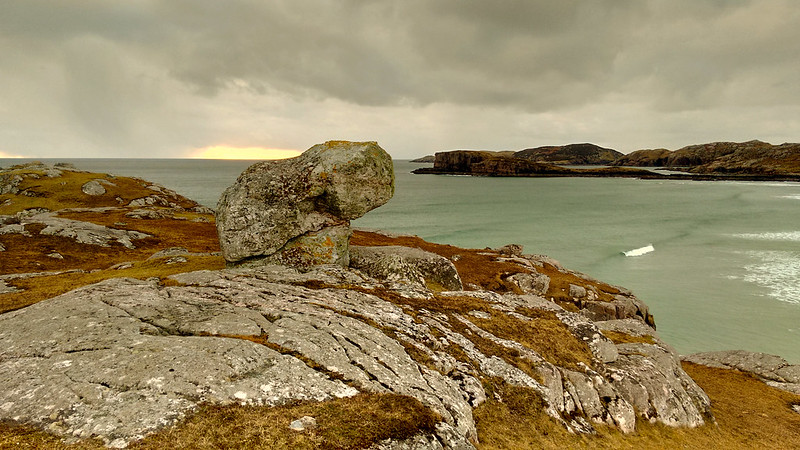 I have never been here in summer, so don’t know how busy it gets, but I was just imagining how this lovely beach would get if it was in my beloved Spain…

And finally, the last stop was on the road to Kinlochbervie, to take another famous picture of Scotland. Is famous enough to be on some Arquitecture book cover that I came across, don’t know how or when…

Sunset over snowy Foinaven, Arkle and Ben Stack from the road to Kinlochbervie 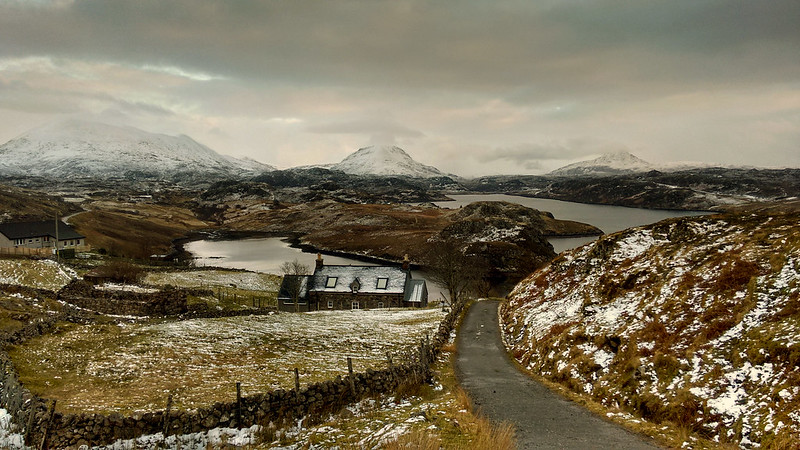 And that was all! There was no time for more, as it got too dark and late for anything else. But it was such a rewarding day in some of the most remote areas of the Highlands. Totally recommended!

Sandwood Bay is beautiful, spent my birthday there two years ago

I agree, weekend weather was awesome!!

Superb photos, Sandwood bay is an amazing place. I particularly like the shots of the storm over the bay.
Must get back there again.

It's been years now since I was at Sandwood Bay, nearly got there last year but after climbing a couple of nearby hills I ran out of daylight. Maybe this year - fingers crossed.

The dark clouds and sunshine make for some great photos.

I don't know what i feel about visiting Sandwood Bay in the winter! I have only ever been on a glorious summer's day and I loved the tranquillity with a bit of sun warmth. Definately a different proposition in the winter months - your pic of the stormclouds over the bay is particularly evocative. A great trip you are on, Sir!

Been there via the coast and also via a night in the bothy then afterwards hitching back to the main road in the back of a pick up with a collie. Brings back great memories.

Thanks everyone for the good comments

Checking the rest of reports about Sandwood Bay, I realized that, indeed, someone had reported the walk including the little hill and passing through the gully. I could have checked it before, as It is actually quite well documented:

As said before, I'd really recommend including it in the walk, it definitely adds up a lot to the day. Though it's also true I'd rather descend it than climb it, it just seems easier

We once had to run from a thunderstorm whilst out on the beach, lightning flashing on the hills around us. A place where nature rules well and truly. Story here, if anyone's interested: http://www.songofthepaddle.co.uk/forum/ ... ing-Paddle