]Well, what an awful winter we have had. Wind, rain, heavy snow, all the horrible ingredients to make ENJOYABLE hill adventures impossible. There are several hardy souls that have still regularly hit the mountains over winter, but the claggy, pictures, almost getting blown over, just didn't appeal to me. On the rare occasion the weather did play ball, I was stuck inside at work, looking out the window, dreaming of being out there.

Since the end of September, and my last climb on Beinn Chabair, my adventures have gained a lot of attention, with a massive spike in followers, so I was feeling the pressure to add another Munro to my collection, and to also get it in good conditions. Both boxes were well and truly ticked today. Not a bad final resting place

As ever, getting away from Glasgow took longer than expected. One of those mornings where nothing went to plan, including playing musical pumps at the petrol station, ending in me not getting any fuel, meaning I would have to rely on getting back down the hill in time to use the green welly petrol station. As expected for such a stunning day, the road was full of cyclists, and I was stuck behind about 20 of them for 10 miles or so on the way to Doune from Stirling. Eventually got to the car park between Crianlarich and Tyndrum at the back of 12. To no great surprise, the car park was full, and I had to edge myself onto the verge. My morning was summed up, when I walked past the turn off to the road towards Kirkton farm, meaning back tracking a couple of minutes, not very much, but after my morning, it felt like a mile! So, on to the climb. I decided to film my progress up the hill, doing some pieces to camera etc, so I figured this would delay me greatly, so I had to make up time while I could, get the head down, and crack on. The hill is easy to get on to, just follow the tracks to to the railway, then cross over, and follow the fence up. The going was a little boggy, but not as bad as reported, benefiting from a little dry weather for a change. Due to concentrating on filming, and getting to the top, I didn't get as many pictures as I would like, but, to be honest, photos struggle to do it justice. Ben Challum is another Munro, that I feel suffers in comparison to it's neighbours. It IS a fairly bland climb, just slogging up by a fence, BUT, a simple 180 turn, and you have some views comparable with anywhere. Crianlarich hills are in constant view, and as you gain height, Argyll hills, then on the summit, you can see for miles!

About half way up, I started meeting the crowds coming back down. Shame I was so late, could have had a right ceilidh a the top. I got my standard funny looks, but, this time, I was also getting people recognising, and asking if I was the Munro Bagpiper. This led to lots of chat, and pictures getting taken. As fantastic, and surreal as this was, I was aware it was delaying me, and with the sun descending into a quite stunning sunset, I had to really make up time.

I knew there was a false summit, and was mentally prepared for reaching the South summit, and still having some climbing ahead., but despite claims from other walkers, the "second climb" wasn't too bad. I quickly marched to the top, and got my tune on a VERY cold and windy summit. You could not tire of the views, as the sun went down, it felt heavenly...although maybe heaven has some heating. As I looked over the hills of Argyll, I played a tune called "The Hills of Argyll" which was written by a gentleman in a prison camp over 70 years ago, to remind him of Scotland. It felt quite emotional playing, knowing the history behind the tune. Tune at he top 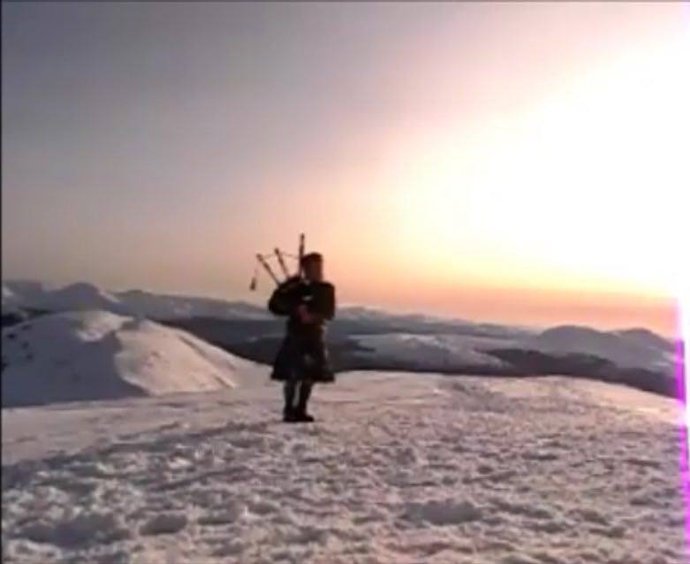 Sun setting on hills of Argyll

All good things come to an end, and I had to get myself moving and off the summit. The winter legs were well and truly feeling like jelly, and the A82 seemed to be getting further away rather than closer. I suddenly remembered my need for fuel, for my car, although, my body was now in need also, and also remembered it was still winter, AND a Sunday...what if the petrol station was shut. Fortunately, I HAD checked this before hand, but just momentarily forgot...although, bein stranded in Tyndrum, and missing my double shift in the morning might not have been too bad! So that is 2016 kicked off, as it seemed to be for many, and I cannot wait to get through the hills this year.

glad you finally got the weather for it!

Do you have a video at all? Love bagpipes!

You came along when I had just finished talking to a gentleman, I had to shoot off because, as you say, I was running short of time. I remember you telling the guy about walk highlands

munrobagpiper wrote:You came along when I had just finished talking to a gentleman, I had to shoot off because, as you say, I was running short of time. I remember you telling the guy about walk highlands

Just paste the URL using the URL bit above, thats what I do with my youtube vids

Mate, I was seriously worried about you all the way home as it was getting well late and you were still well down. So glad to see you made the summit and made it home safely. Love to hear your bagpiping.

I always mention Walk Highlands to folk I meet on the hills - best website for hillwalking ever!

Haha, no need, wouldn't have kept going if I was going to be struggling to get down. Despite appearances, I am well prepared and briefed on things. I'll give the video a try.