). Still feeling a bit short on breath after the debilitating illness, I opted to ease myself back into things and make for my closest unclimbed Corbett/Graham.

Mullach Coire nan Geur-oirean lies deceptively close to the Loch Arkaig road, but without a boat, the summit is quite a way away from anywhere. My plans for this hill last summer were to include it in a very long day out starting with a train from Banavie to Glenfinnan and traversing Streap, Braigh nan Uamhachan, and Gulvain first, before dropping down to a strategically placed bike at the head of Loch Arkaig. I didn't get around to it, and after having a rather enjoyable outing on Streap and Braigh nan Uamhachan at the start of the year, the appeal of the full traverse seemed to diminish


Glen Mallie.gpx Open full screen  NB: Walkhighlands is not responsible for the accuracy of gpx files in users posts
I'd thought of including Gulvain in the walk today, but decided to give it a miss by the time I got to Achnacarry. I realised I'd forgotten my axe and crampons anyway (although I suspected they probably wouldn't be required on Gulvain). I had my bike to speed up the approach so decided to start from Achnacarry rather than Eas Cia-aig - couple of miles less driving and barely any more cycling. 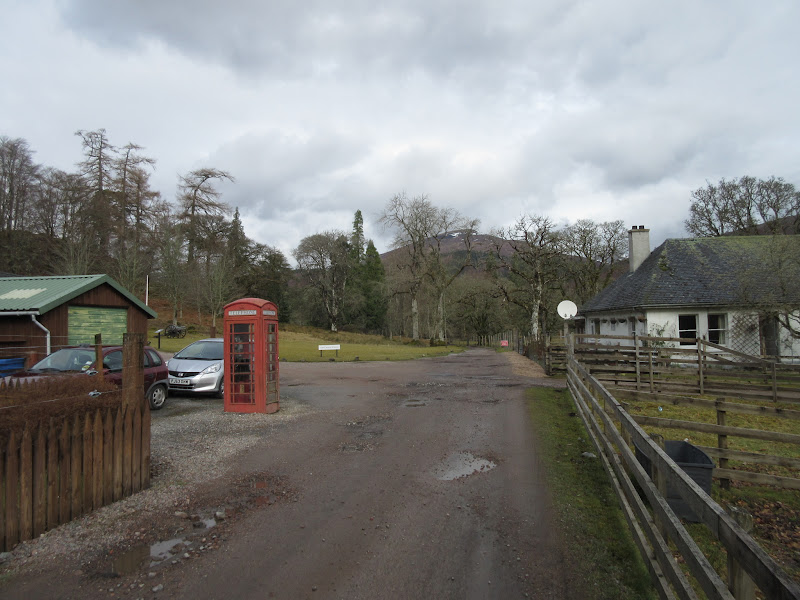 Cycling through the Achnacarry estate was easy - mostly on tarmac, and I was at the junction with the road from Eas Cia-aig in a little over 5 minutes. The track got rougher here and had some short steep ascents. My bike was suffering from a winter of no maintenance and the derailleur jammed in the back spokes at one point. Still, the sun was out, the birds were singing and it felt like spring at last, so I didn't mind too much.

Bridge at head of Loch Arkaig: 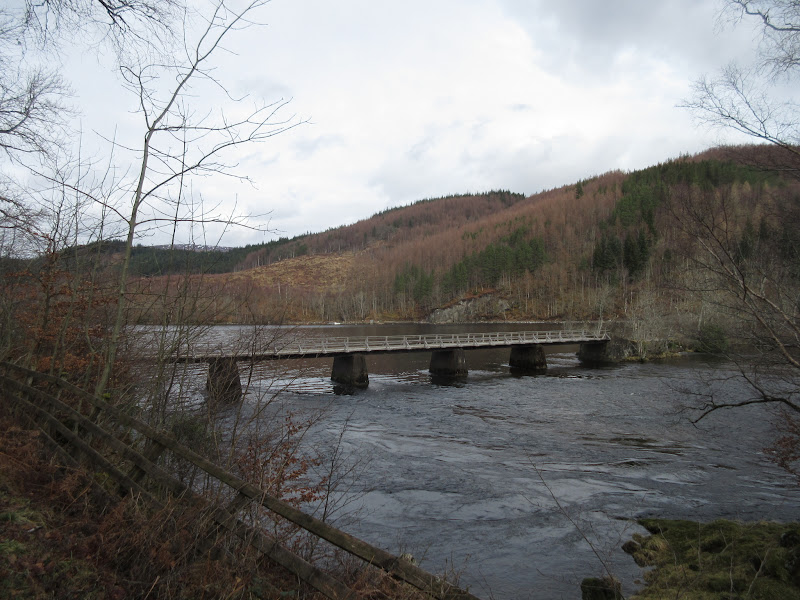 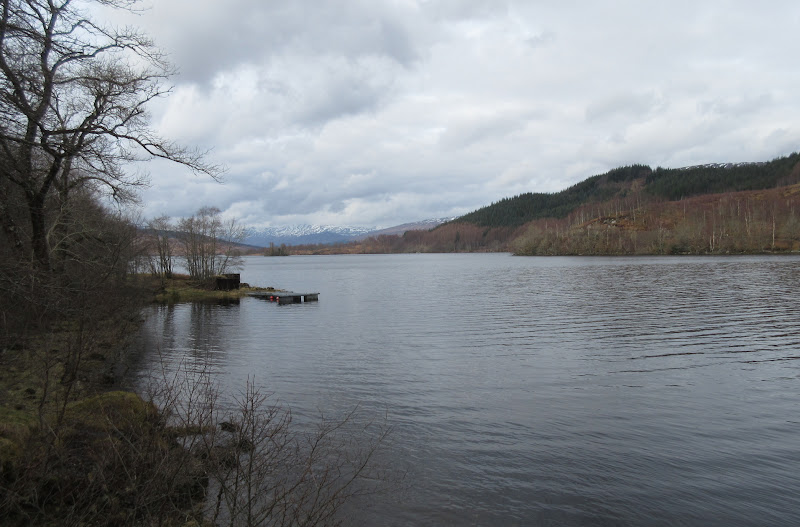 I detoured on a rougher track past Invermallie bothy (this is actually shown as the only track on the map, but appears to have been bypassed to the south sometime in the last 15 years or so), and dropped in for a look around. Very large and in good condition - must come back to stay sometime. 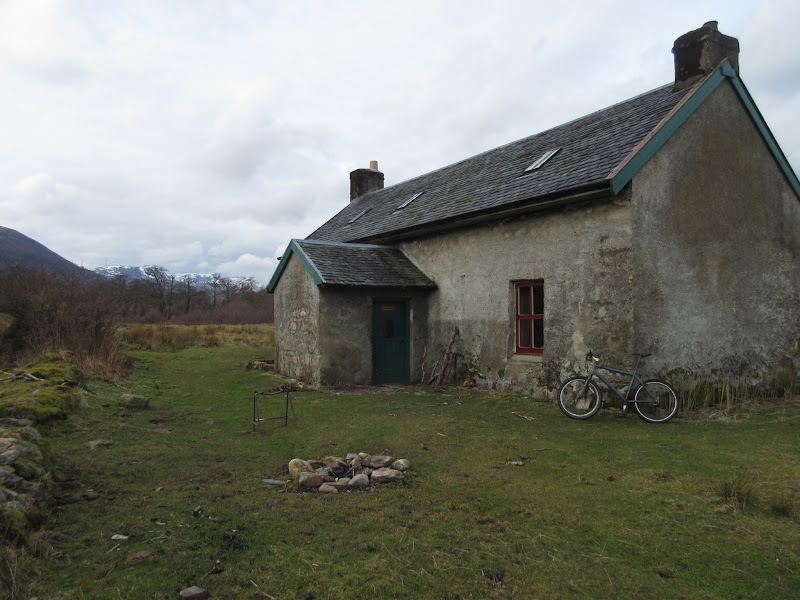 Beyond the bothy a short push/pedal up the river bank took me to the newer track and a bridge over the Mallie. The map doesn't give away a great deal about Glen Mallie - just a fairly steep-sided glen with a track up it. However the northern flanks of Bheinn Bhan are covered in mature Caledonian pine forest, and small remnants of this continue right up the Glen, making it very picturesque. I almost abandoned the bike at the high point but once I saw how much further the summit of Mullach Coire nan Geur-oirean an was along the glen, I decided to keep pedalling all the way to the ruin of Glenmallie.

Glen Mallie and Meall a’ Phubuill: 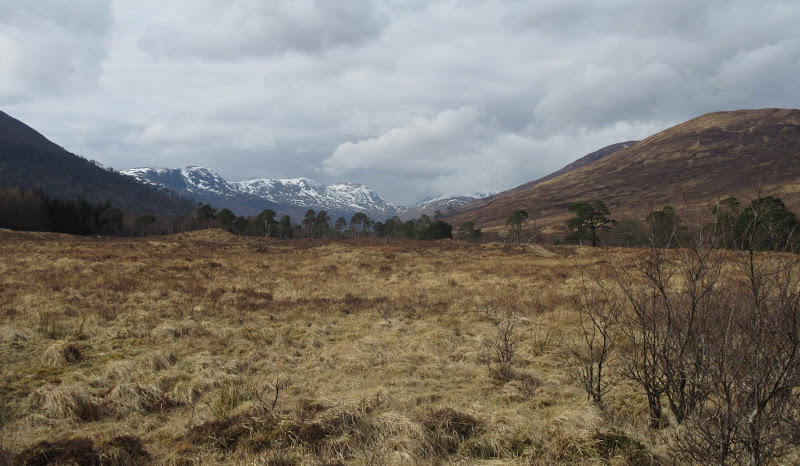 Love is in the air: 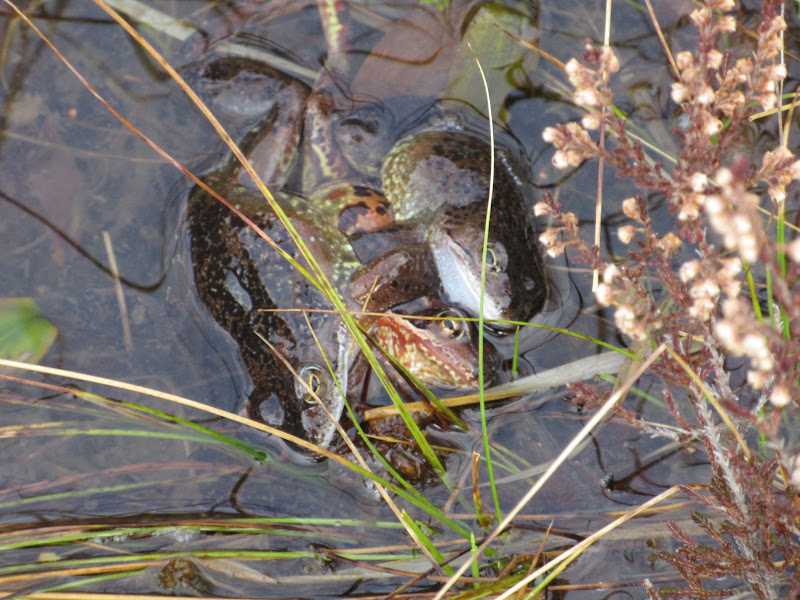 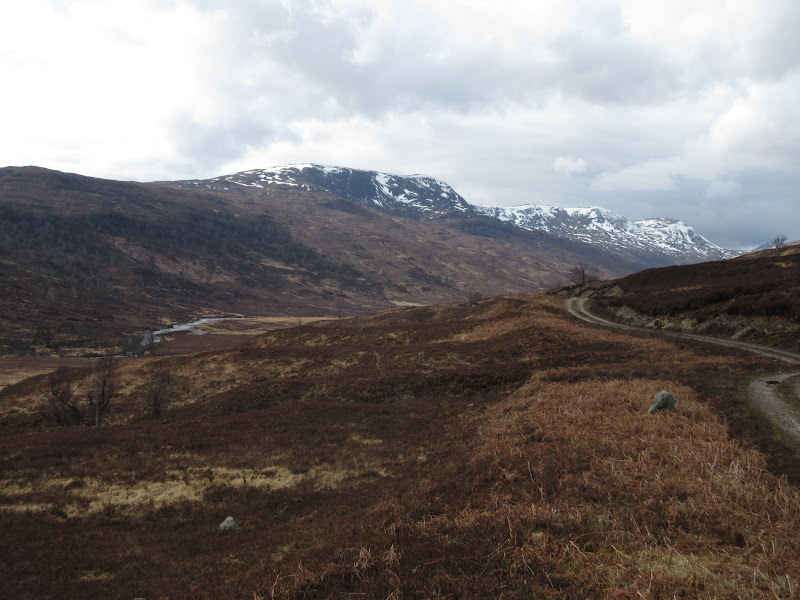 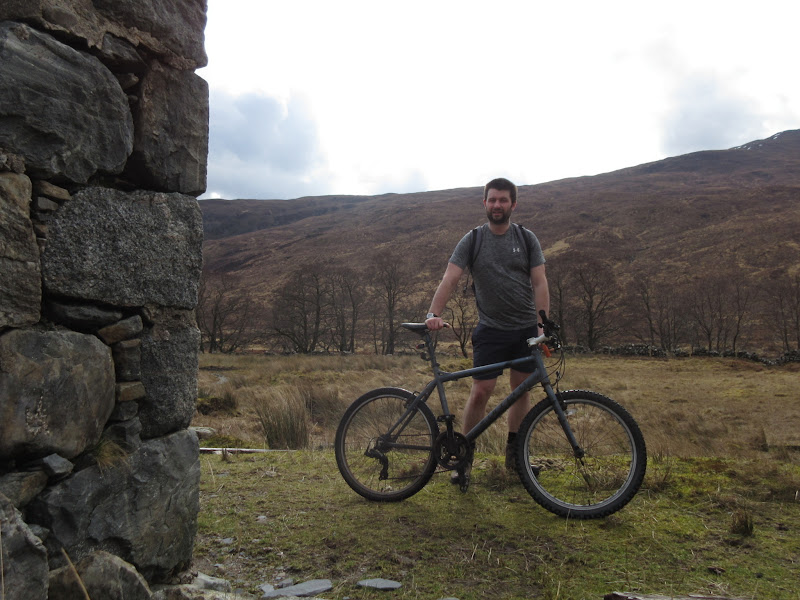 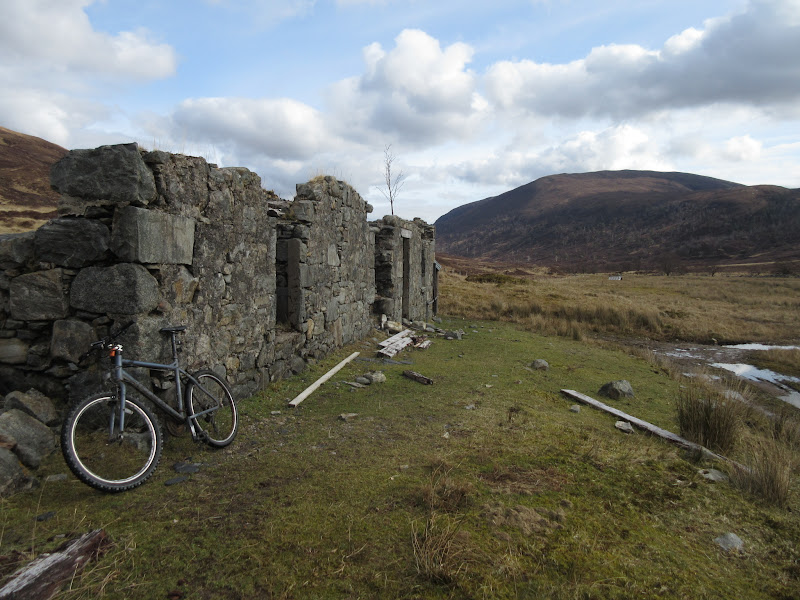 I left the bike behind the ruin and headed a little further up the glen before striking out onto the hillside to the north. Normally I would try and get high early on and stick to the ridgeline but I was feeling lazy today, and had a suspicion that the ridge was broader and boggier than I might have hoped for. Even with my truncated route, I'd still get a mile or so of the summit ridge in. 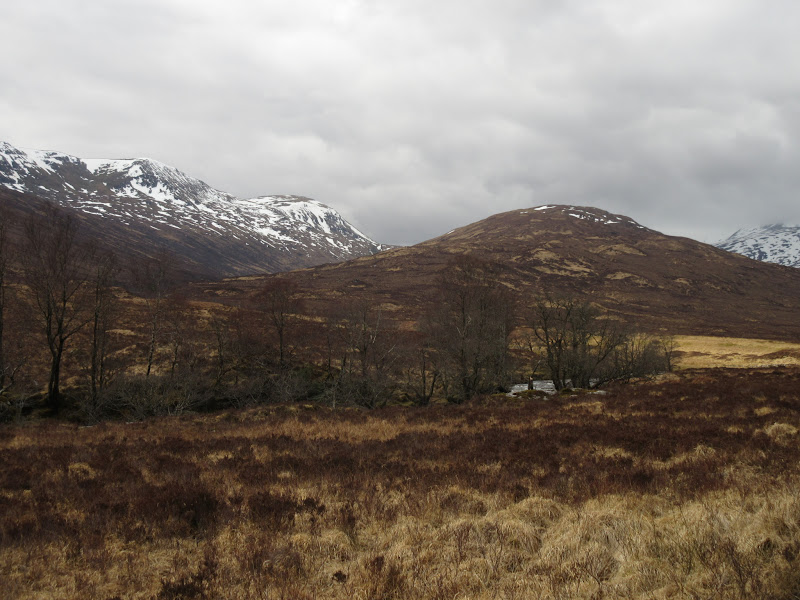 The initial ascent was heathery and had me gasping for breath briefly, but things soon calmed down, and eventually the gradient eased off. The ridge was broad and haggy in places, but there were good views back to Aonach Mor and Carn Mor Dearg, which was still catching the sun. 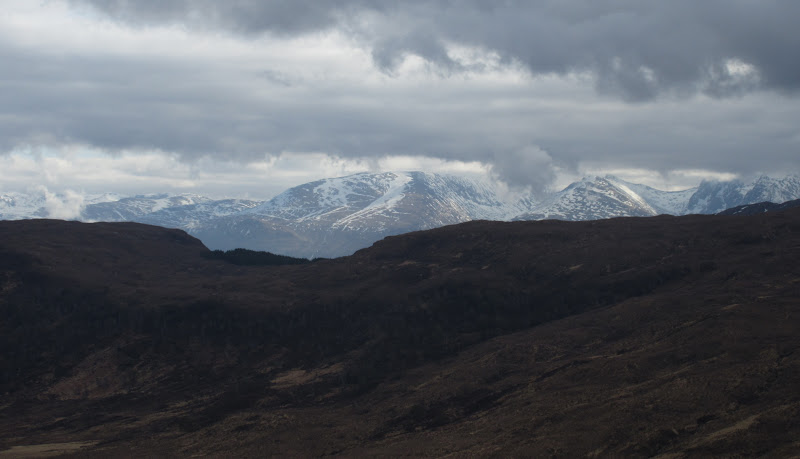 Looking up Glen Mallie towards Gulvain: 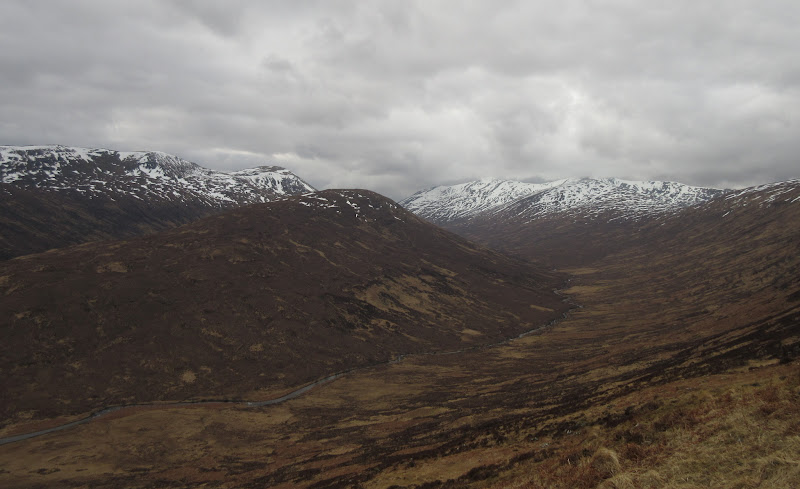 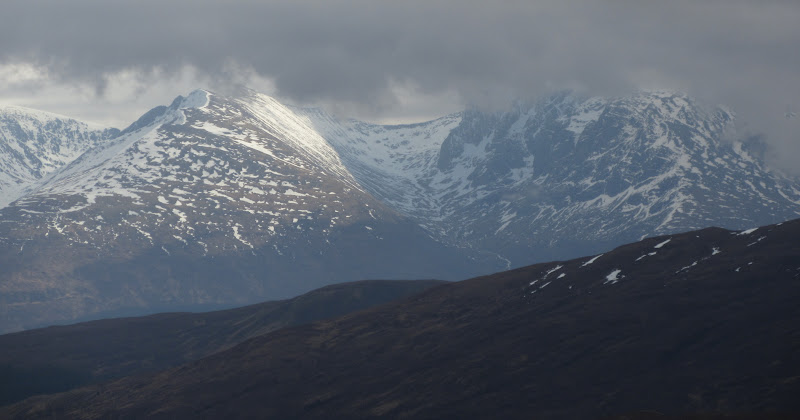 Lone stag on the ridge: 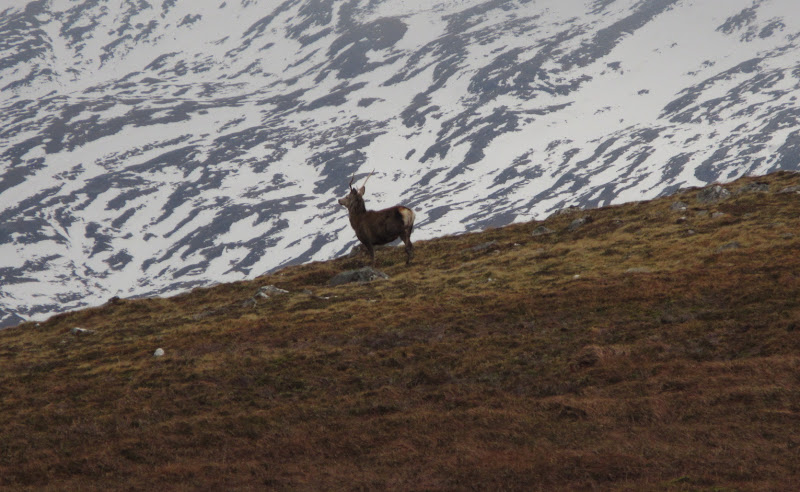 Eventually Loch Arkaig came into view, as well as the edge of Knoydart and the hills north of Loch Quoich. The summit had a chilly breeze, not helped by the fact that I was still in t-shirt and shorts. I put my jacket on and had 15 minutes just to the nort of the summit eating lunch and looking at the scenery. There was a tiny spot of sunshine on the hill opposite, and looking down Glen Pean, I could see right through over An Stac and Loch Morar to the coast and Eigg. 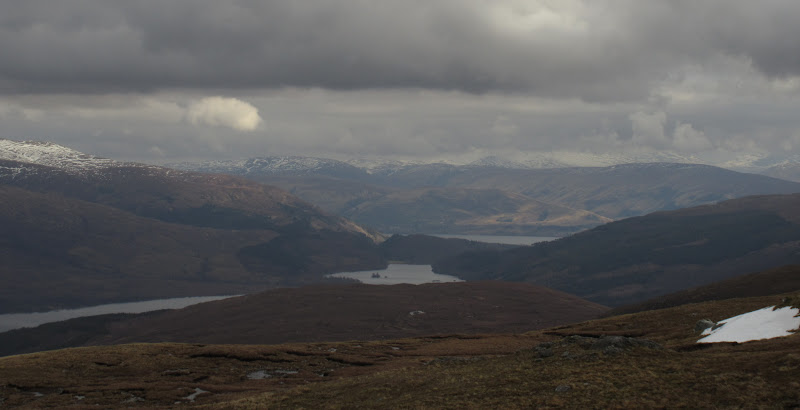 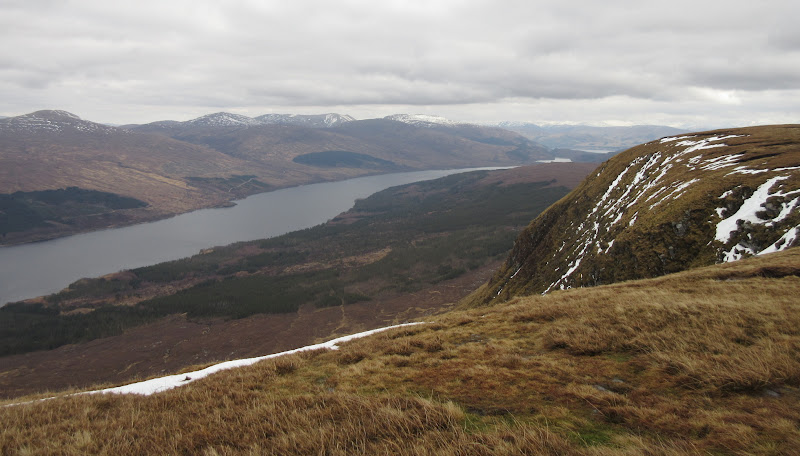 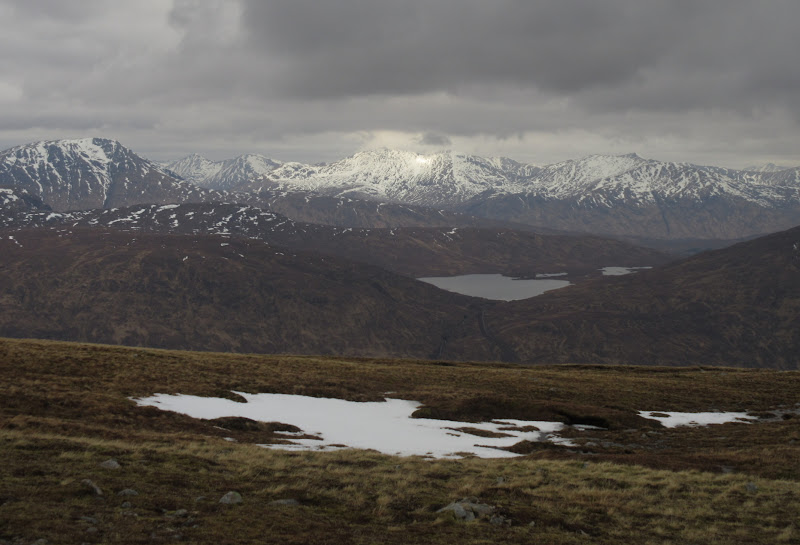 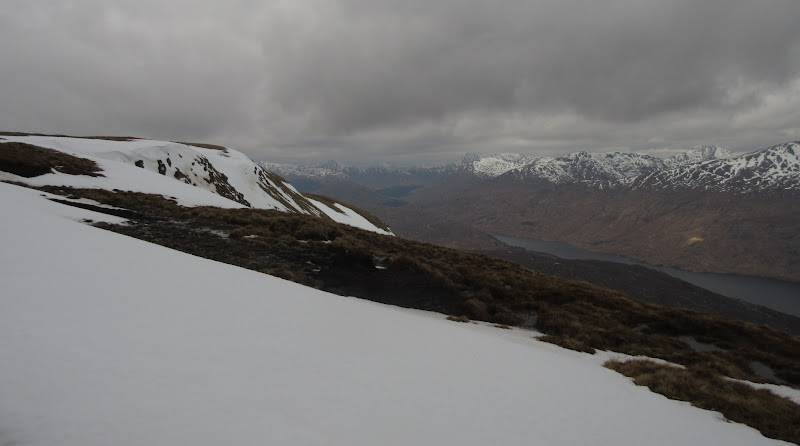 The spot of sunshine that was following me across Rannoch Moor last September (with Sgurr Mor behind): 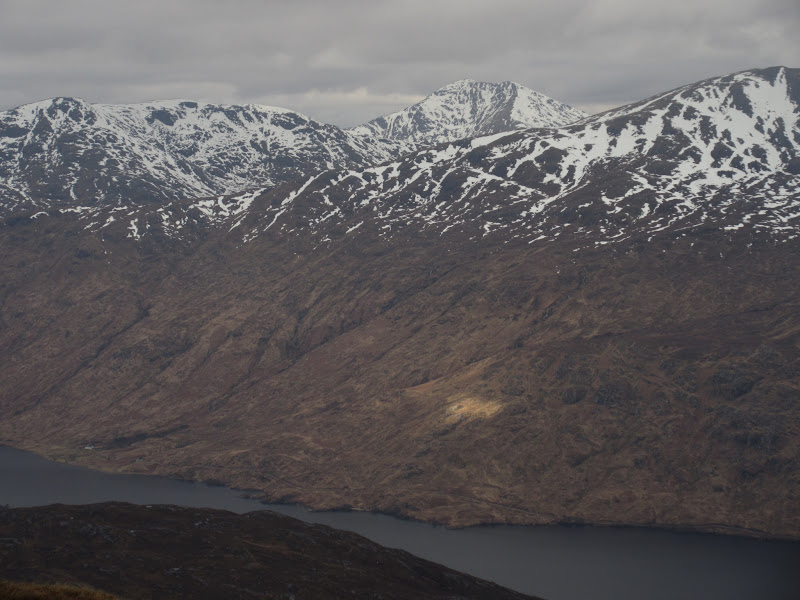 Between An Stac and Carn Mor you can see a sliver of Loch Morar and the north end of Eigg: 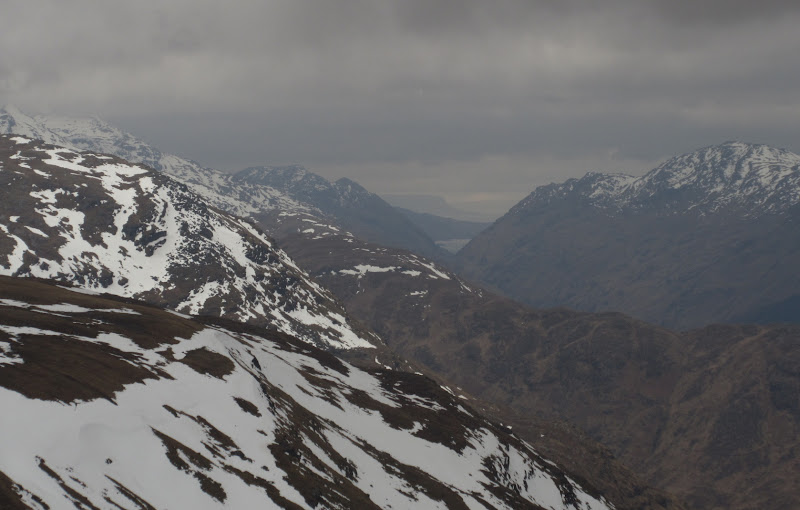 Gulvain was still in the cloud so I wasn't too bothered to be missing it, but the northern end of it looked like a good way up - one I'll be back to one day. I dropped down very steep slopes back into Glen Mallie, and things warmed up again fairly fast. The walk down the glen to the bike was very enjoyable alongside the infant River Mallie, and the path was reasonable enough. While the initial spring sunshine never re-emerged, it was a nice end to the walk.

The ever-present Meall a Phubuill: 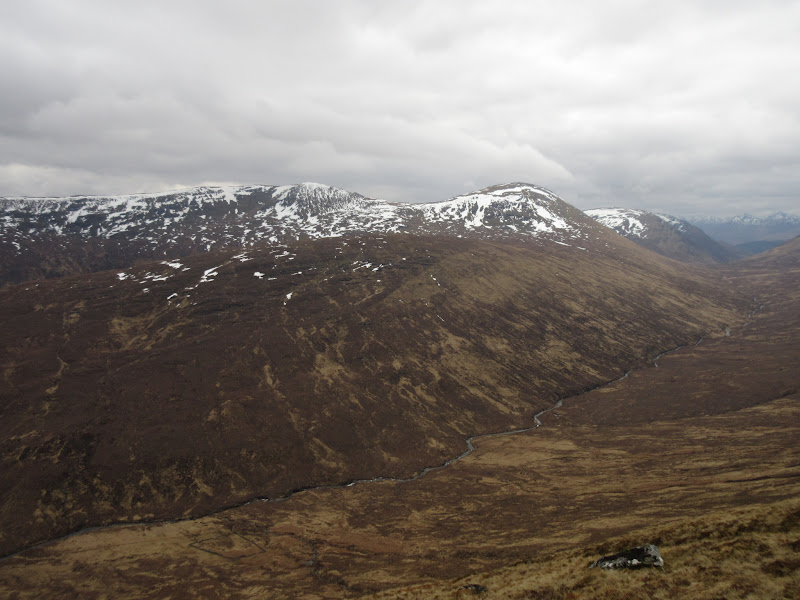 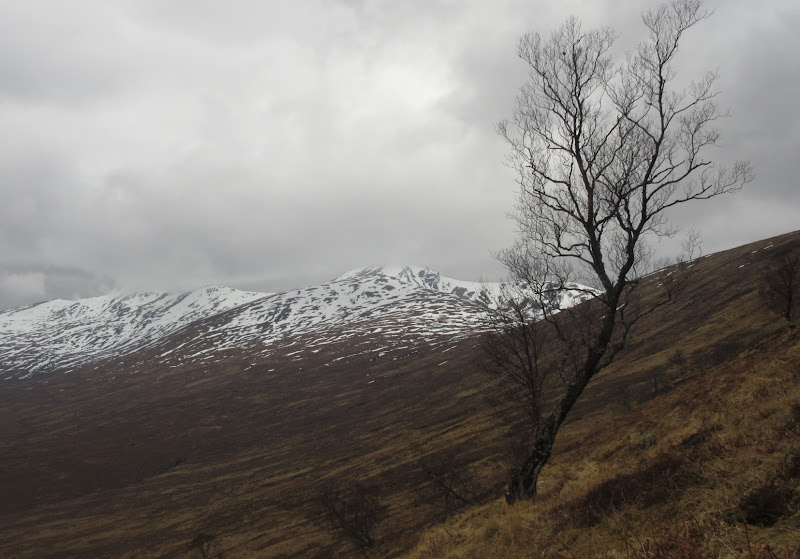 Back in Glen Mallie: 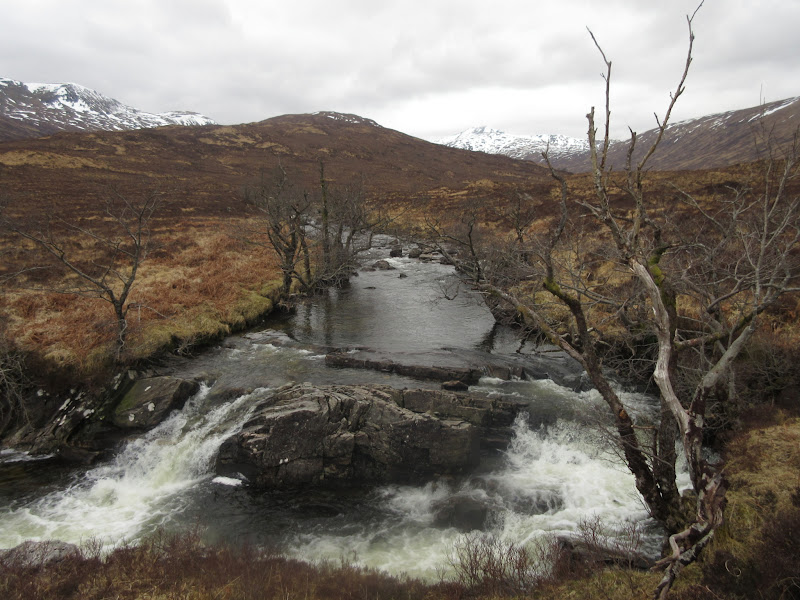 The initial pull back up to the high point of the track wasn't too long, but was a brief struggle on the bike. Then it was mostly downhill towards the bothy, which I skipped out on this time. The northern corries of Bheinn Bhan towered above the pinewoods - definitely the best side of this hill. I also discovered that I barely had any brakes left on the bike - definitely needs a spring overhaul (especially as my commute into work is almost all downhill). 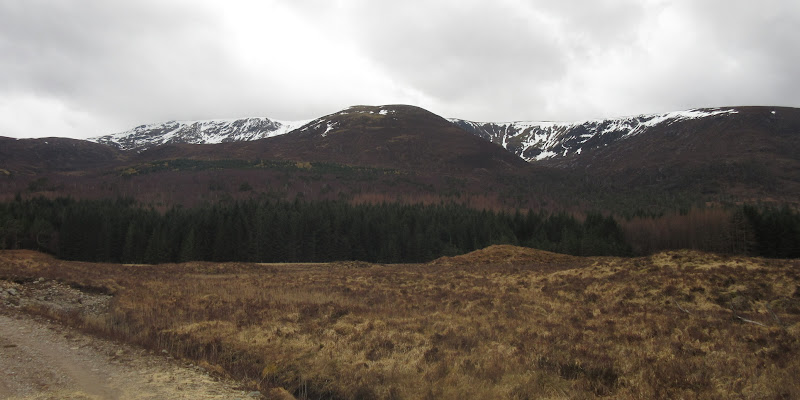 The steep ups and downs along the lochside were briefly annoying, but I was soon heading back through the Achnacarry estate and back at the car. Quite a long way for a quickie - it took me over 5 hours even with the bike! I was going to drive round to Glen Roy and nip up Beinn a' Mhoncaig, but as I was having a more leisurely day, I decided to leave it for another time.

Its a nice wee corner that, quiet and peaceful.. Looked lovely

Great stuff Malky, good to see that shorts are still the choice of the discerning hiker irrespective of weather

I opted to ease myself back into things

Jeebus man, this would be my longest day....easing....you don't know the meaning of the word

The dreaded man flu strikes again! The marks on the bothy walls remind me of my one visit there when it had obviously been hit by floods. Wonder if that has happened again recently.

'S math a rínn thú a' bhalaich ...good stuff ,weather has been spectacular here this week