I set off with the idea that it might clear as the day went on, and if I only got up to Coire a'Chrunnda, then it would be a good walk anyway. The cloud was thick leaving Glenbrittle, but I could hear skylarks singing overhead, and it sounded as if they were quite pleased to be up there, and this was the first time my mind turned to hopes of an inversion. The walk in was nice and quiet, with just the birds and the waves on Glenbrittle beach. 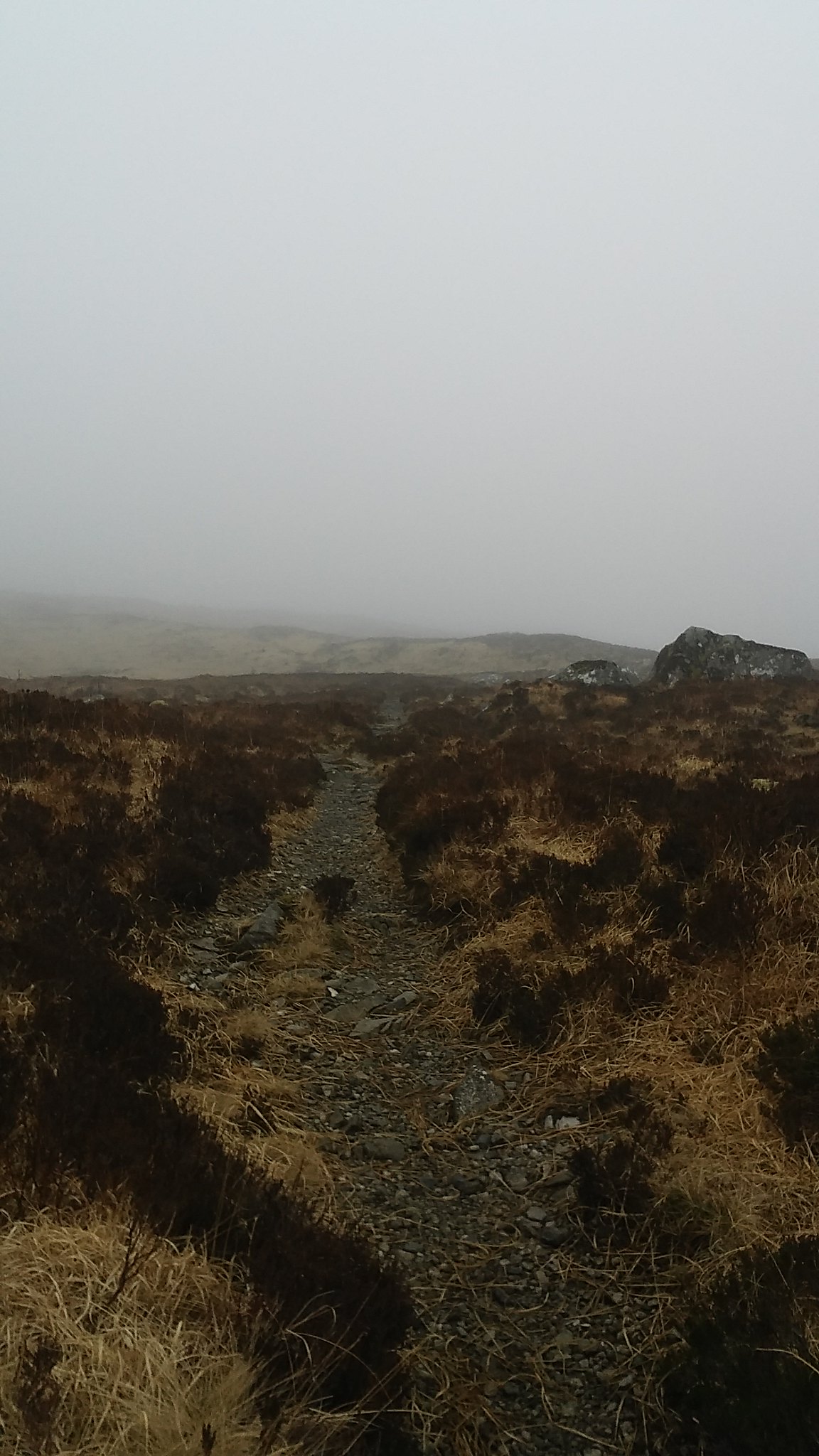 It was very quiet in the fog, so I got to see a bit more wildlife than usual, a number of grouse and very prolonged spell of standing still as wee weasel came up to within a few metres of me. This was the first time I'd seen one other than when they shoot across in front of the car. 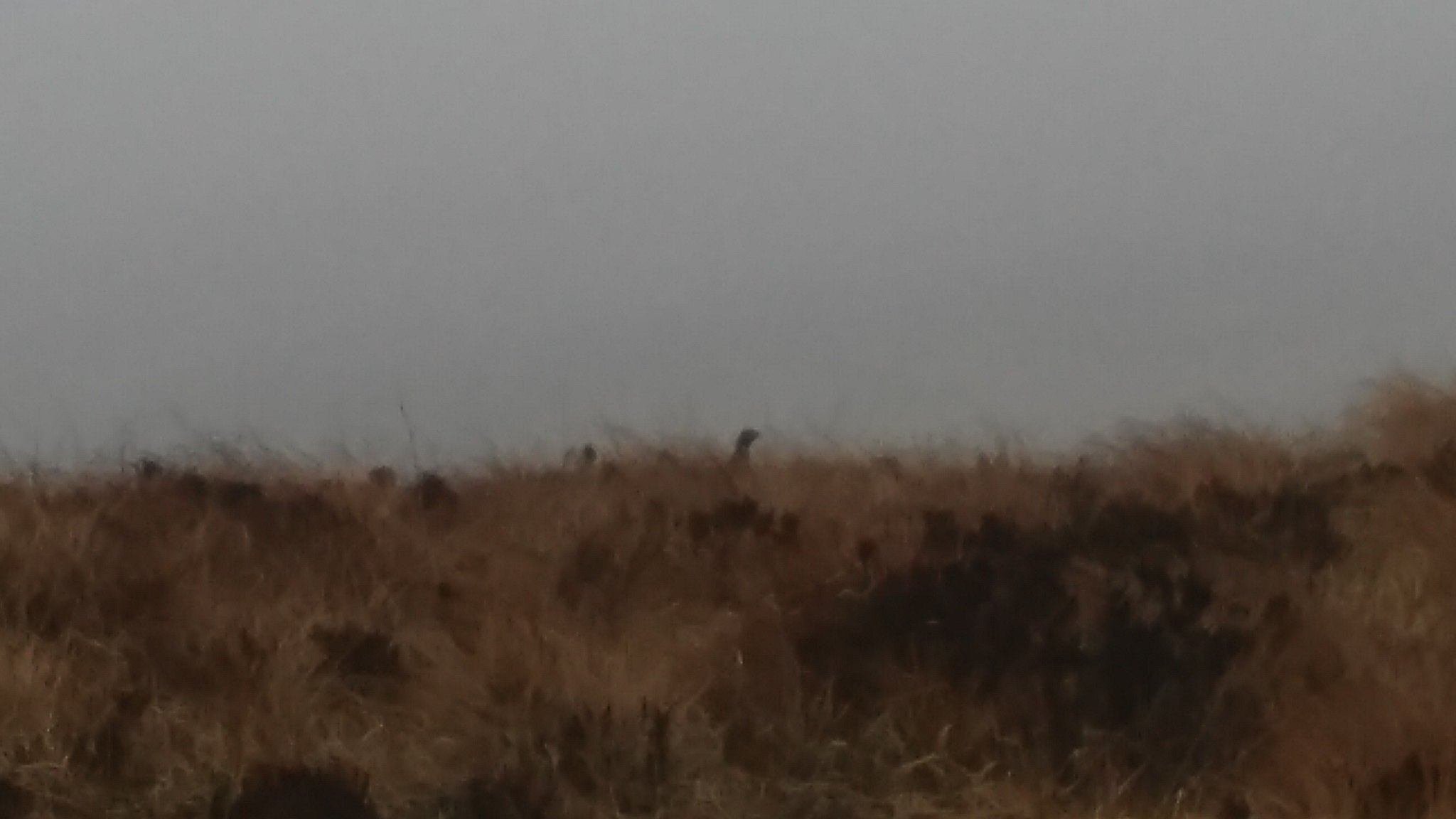 Getting up into the corrie was pretty straightforward, as I just had the path in front of me to go off. I was just below the waterfall when I noticed the cloud thinning overhead and knew I was in for something good. 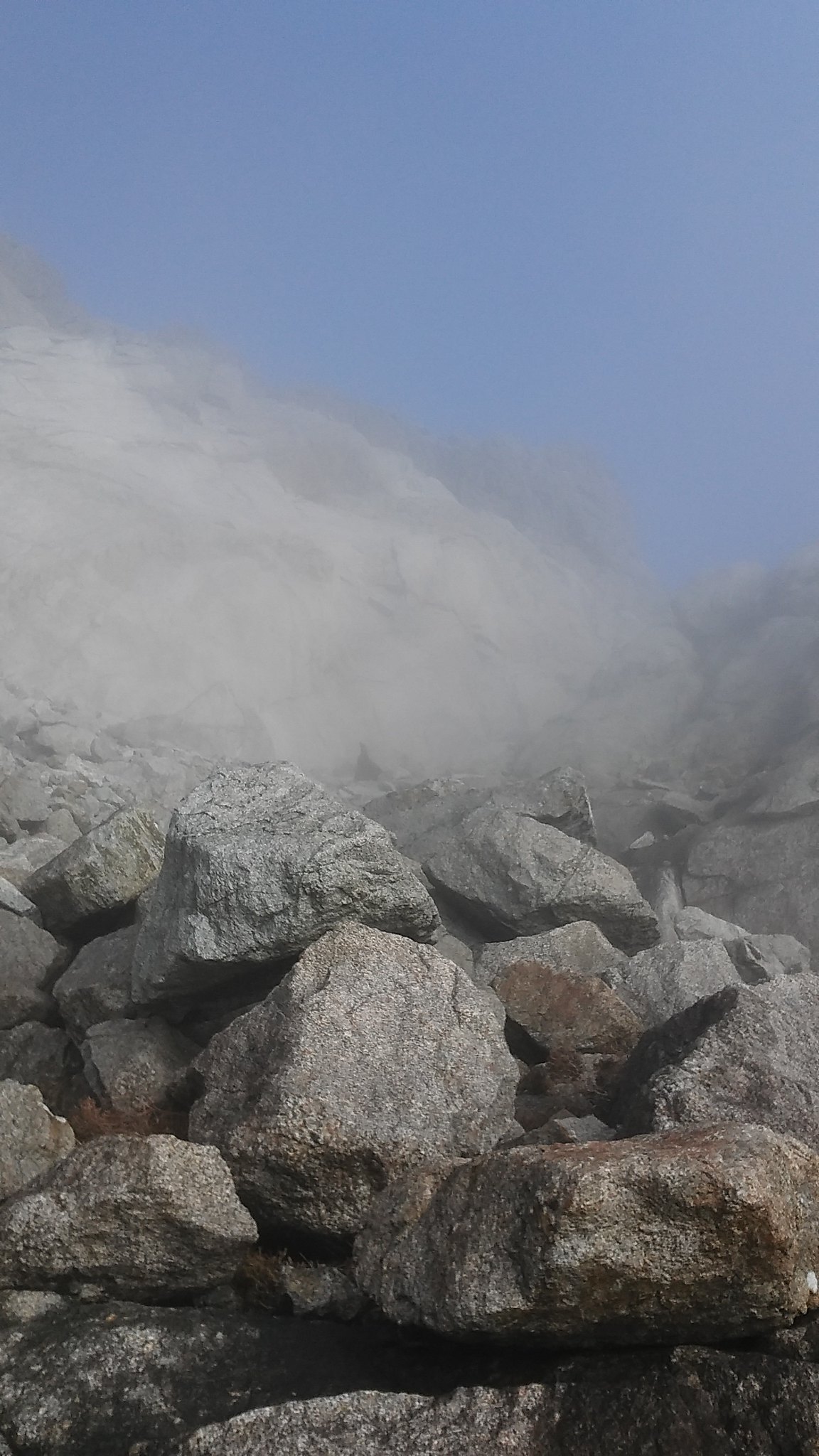 The feeling of breaking through into the sky was exhilarating, I knew there was a good chance I was the only one up in the area, with no cars or tents below, which made it all the more special. I was completely elated and had a memory of Ephesians 2 running through my head about being "raised up and seated in the heavens to see the incomparable riches of his grace in kindness to us in Christ Jesus". Transcendent. 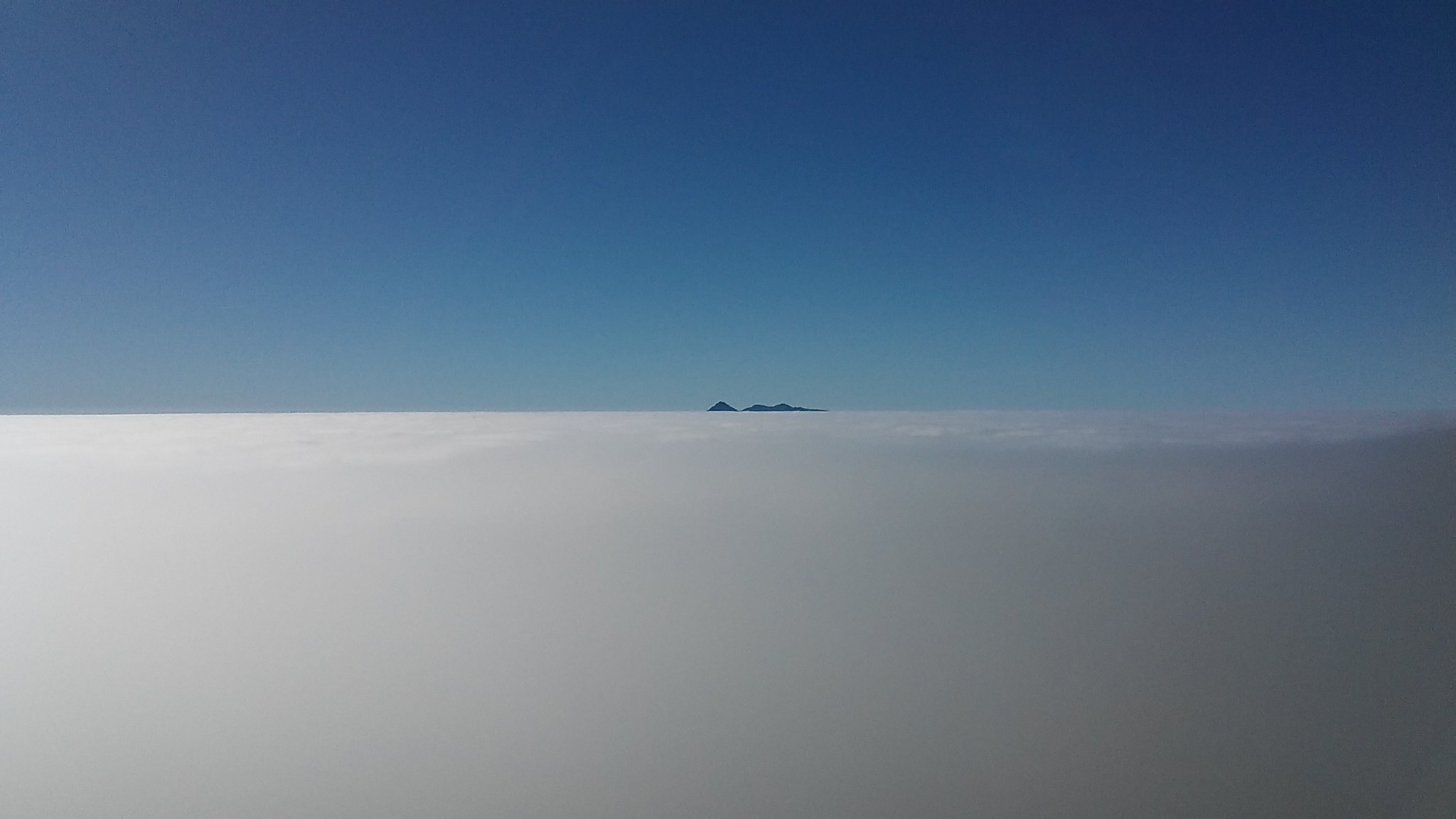 I spent a good bit of time soaking it all up before heading round to the left of the lochan to the boulder field in front of Sgurr Dubh na Da Bheinn. I shot up this to the left of the caisteal where I took a couple more pictures. Good old phone camera. 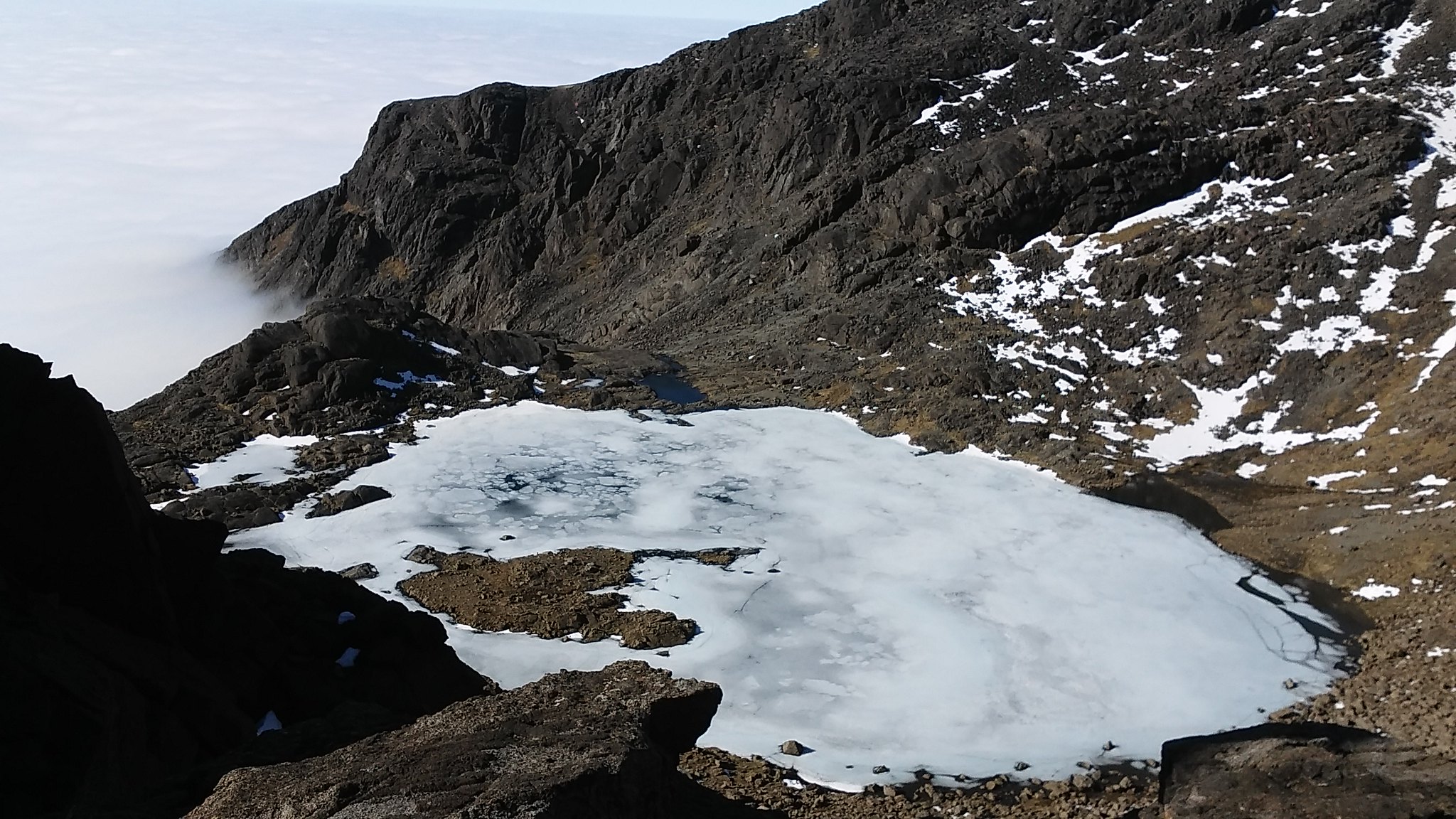 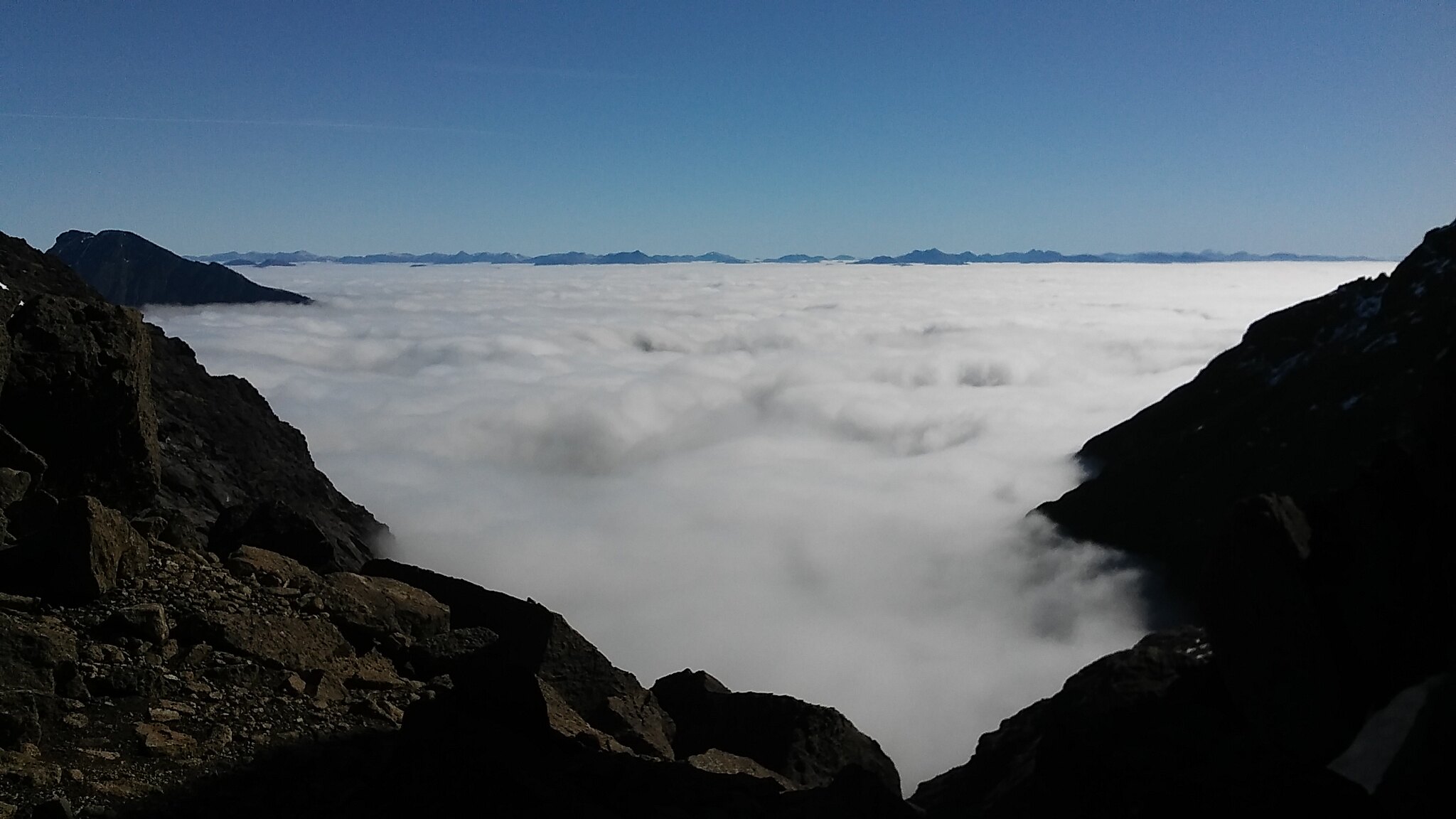 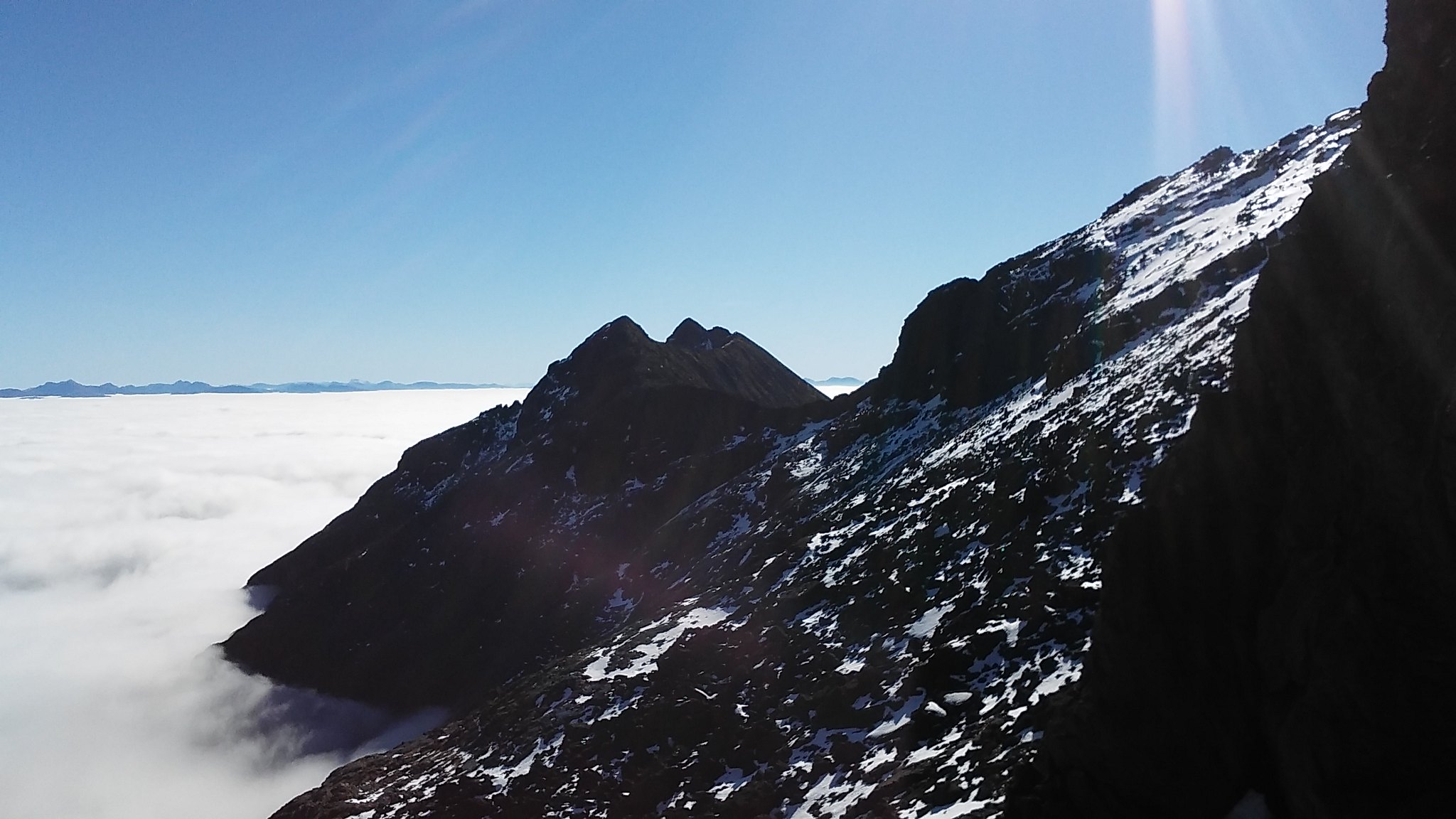 I unloaded all the winter clothes and stuffed them under a rock on the bealach, continuing with map and lunch up Sgurr Dubh na Da Bheinn. Great views of the Sligachan Cuillins from here and all the way up Wester Ross. Trotternish was all covered in cloud. 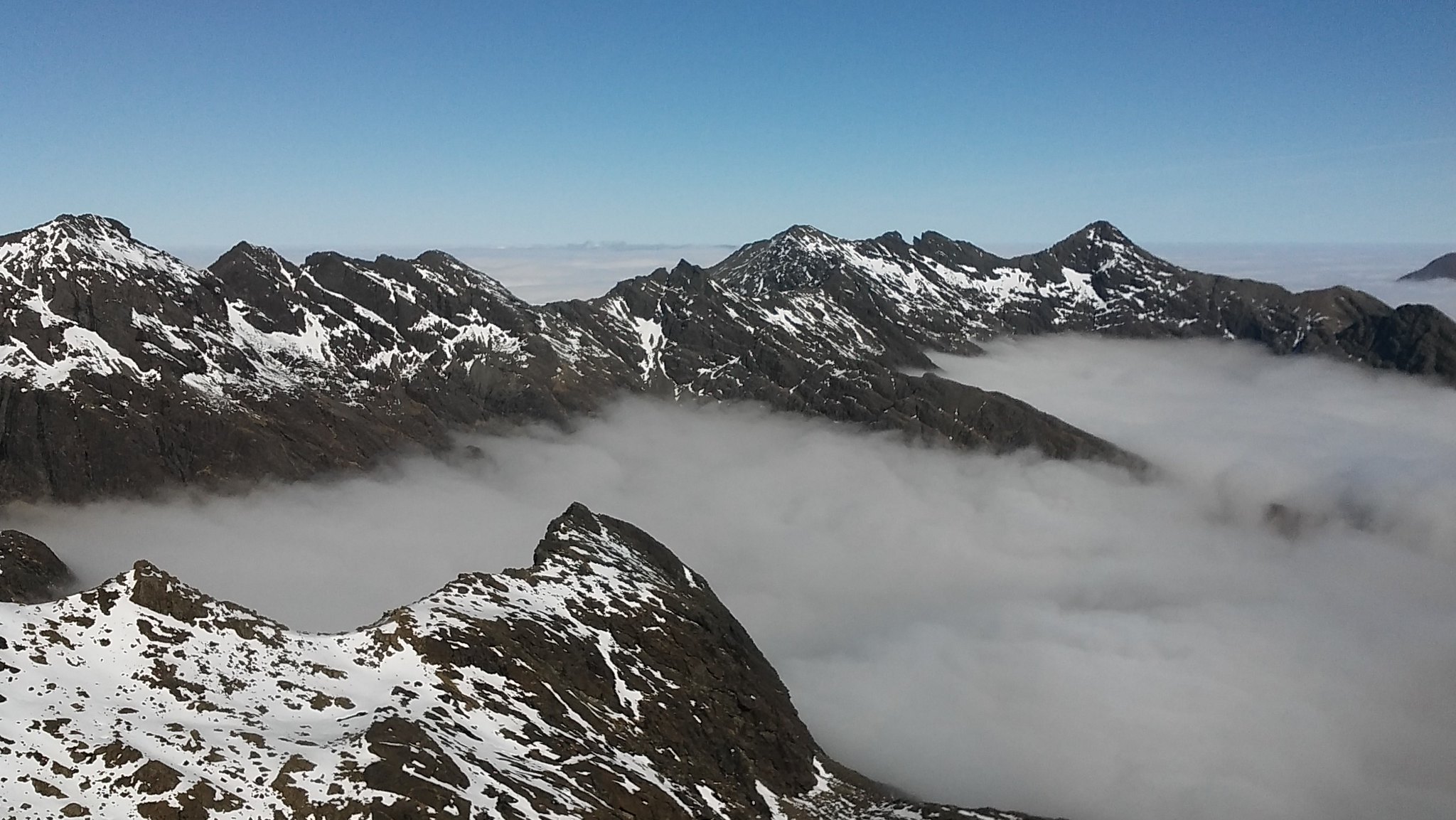 Cloud Inversion from the Cuillin Ridge 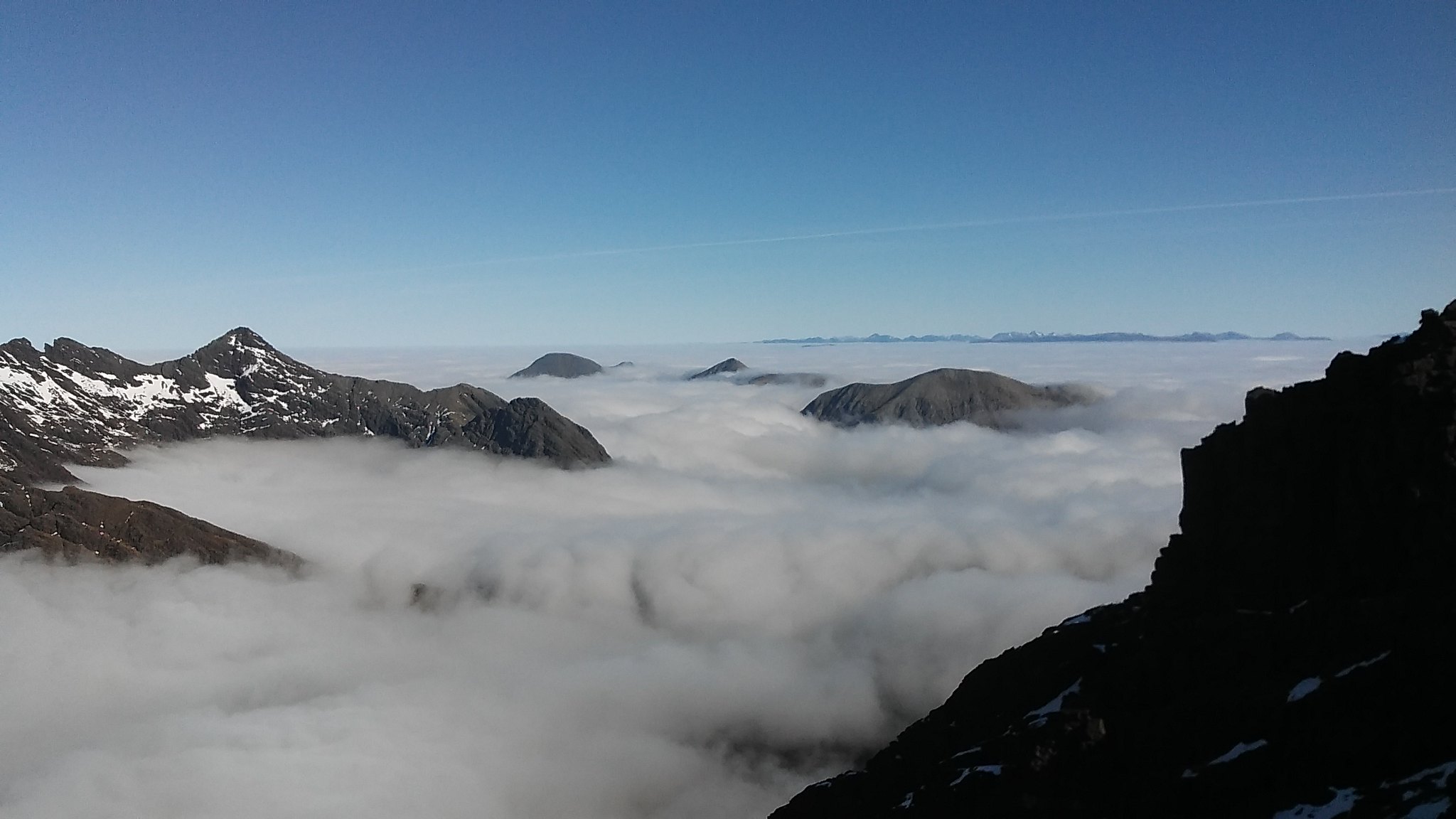 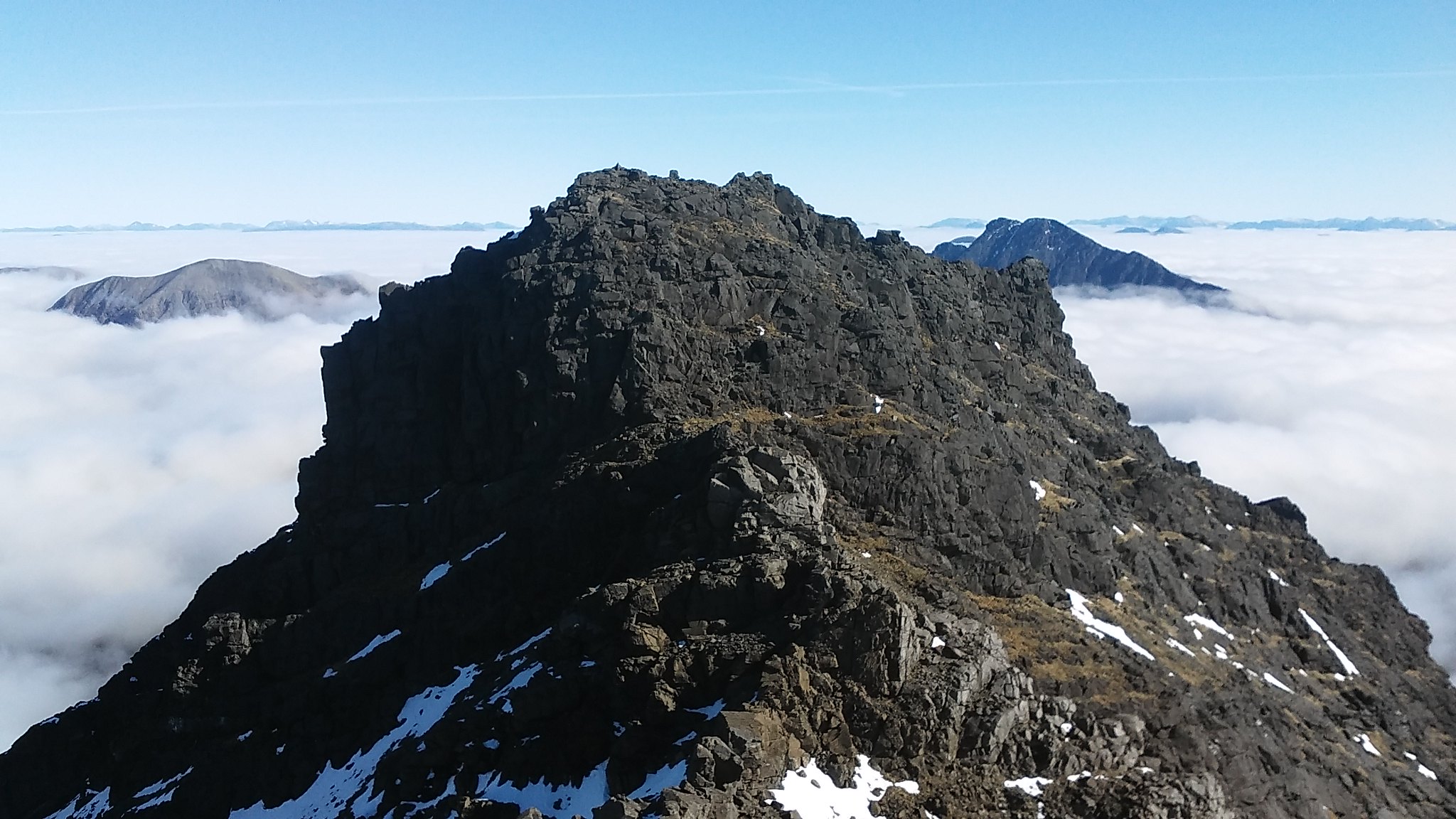 I took a good look at Sgurr Dubh Mor, and tried as best I could to pick a route, but it wasn't much use. The hardest part was getting down from SDnDB and across to SDM. Not being kitted out for winter conditions I didn't trust any of the snow on the north slopes, choosing instead to scramble along the tops or on the warm south facing side. I think it would have been easier if I could have used both sides of the ridge. I left lots of mental notes on strange shaped rocks for the route back up. I could hear snow dropping now and then too, which gave me more reason to avoid it. I wondered at this point if it might actually be too difficult to get to Sgurr nan Eag later due to much of the ascent being in the shade by the looks of things. Once on the warm south facing rock of Sgurr Dubh Mor I was feeling much better and thoroughly enjoyed the scramble up. Sometimes I get really tense and scared and other times I'm just more relaxed, and I honestly can't tell which scrambles do or don't get my knees knocking until I'm on them. Sgurr Dubh Mor didn't turn out to be the nightmare I'd built it up to be, certainly nothing like the Am Basteir bad step. That said I still needed a wee sit down and some deep breaths to settle my nerves once at the cairn.

Back to the main ridge, following mental notes and familiar rocks was much more fun. Started off for the bealach too far to the left on the way down from Sgurr Dubh na Da Bheinn, and had to go back north for a wee bit. It took a lot longer than I remember coming up, probably because I was so buzzing on the way up.

Picked up my stashed kit and had a coffee. I had planned to go round the east of Caisteal a'Ghairbh Coire but it was all shade and snow so decided to descend the slopes into Coire a'Ghrunnda and work my way around instead. The boulder fields here were, in reflection, the most dangerous part of the walk. Too big to be dismissed as scree but not big enough to stay stable under my weight, at one point I could have had a nasty fall. I'll avoid slopes like this in future. Anyway picking across slowly I eventually started to reascend after the first main line of crags to the ridge. The scrambing here was tricky and there were a few dead ends, but not the snow and ice that I'd worried about. I tended to the west side of the ridge and made my way up eventually. As soon as I came across a good place to descend later I dropped my bag, and headed off unencumbered to continue the scramble to the Sgurr nan Eag ridge. 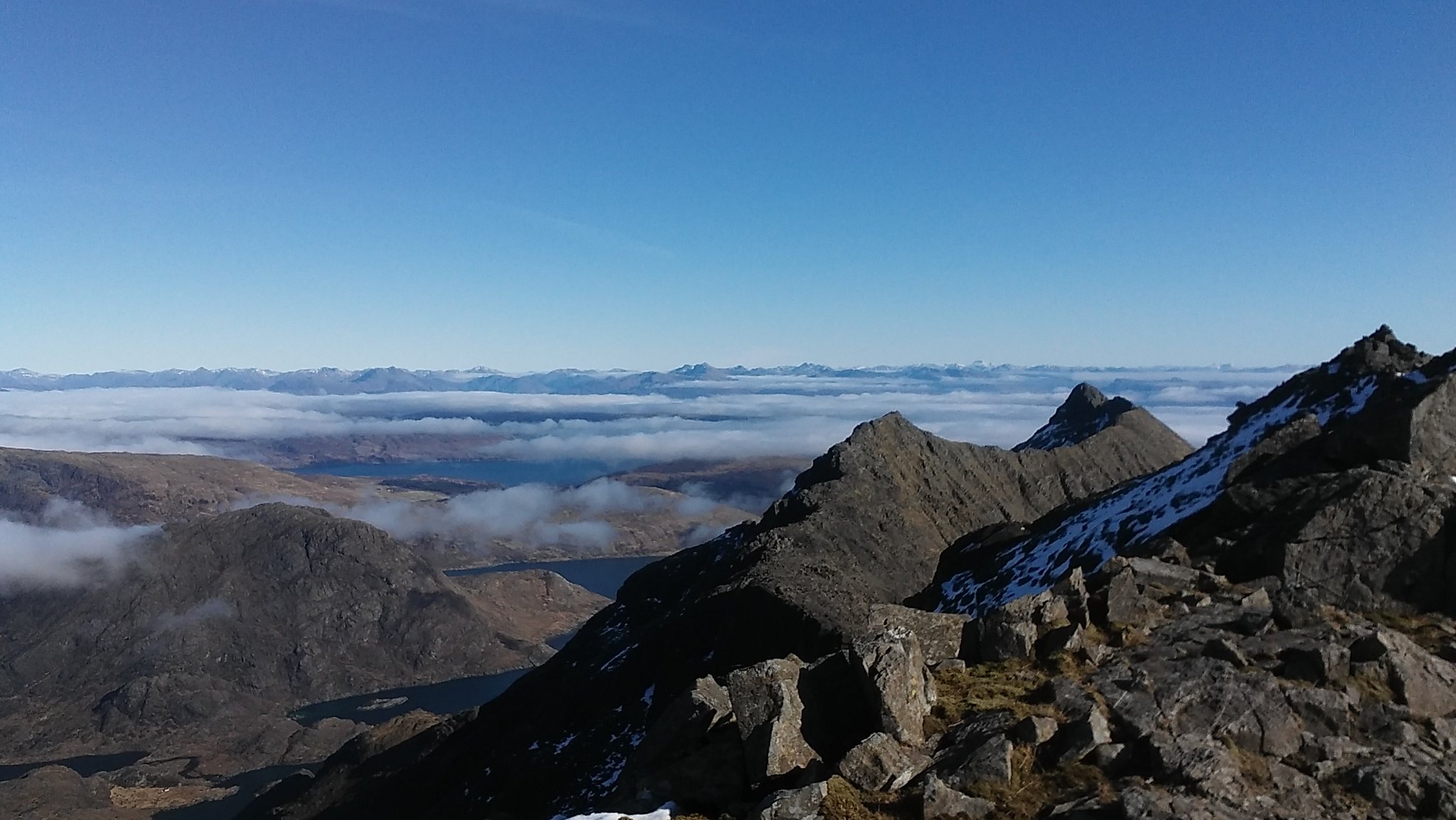 Gars-bheinn and Sgurr nan Eag with Ben Nevis in the background.

This ridge walk along to Sgurr nan Eag was lovely. A sea of cloud down to the right and the clouds opening on the left to show the sea across to Elgol. 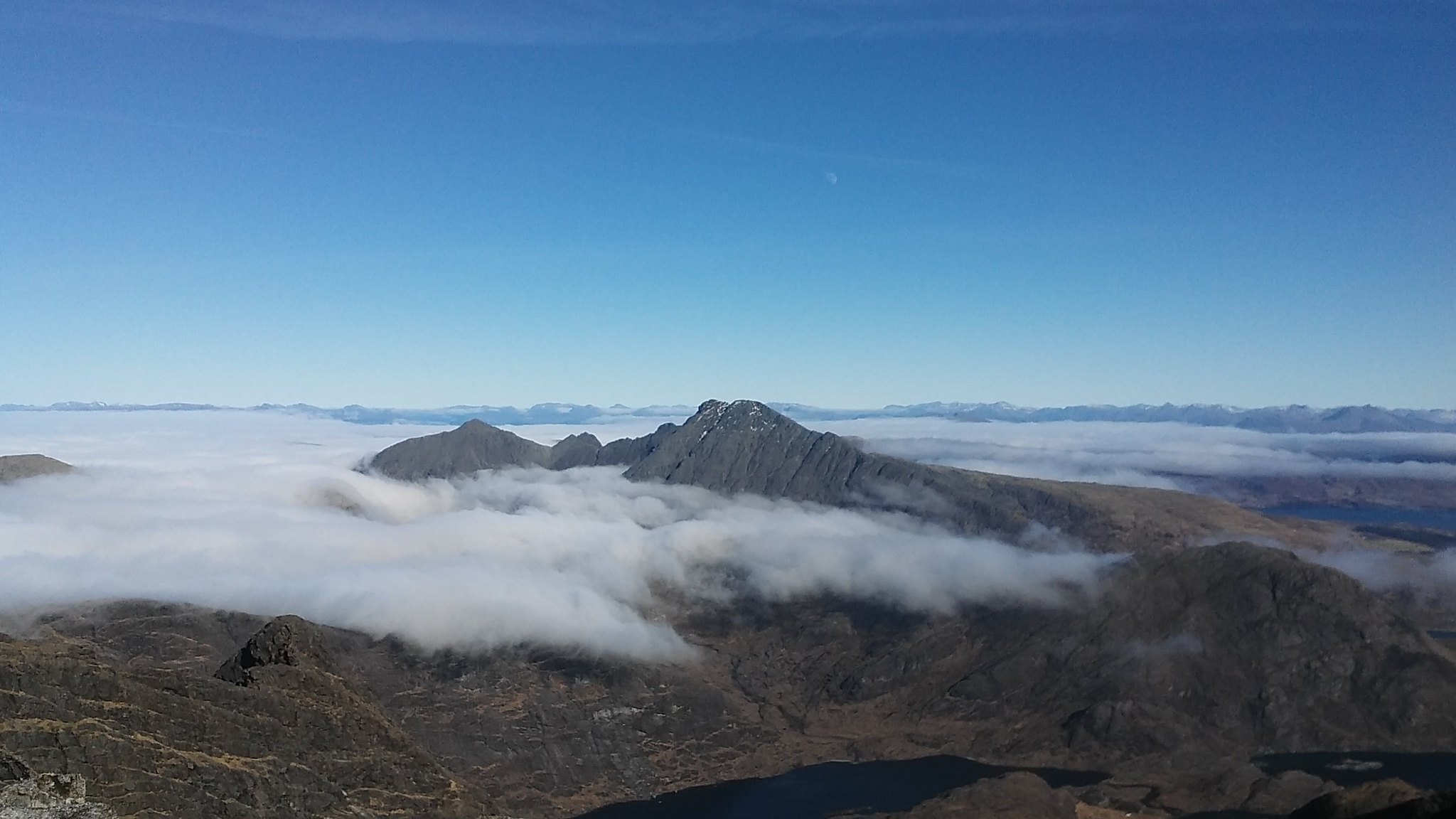 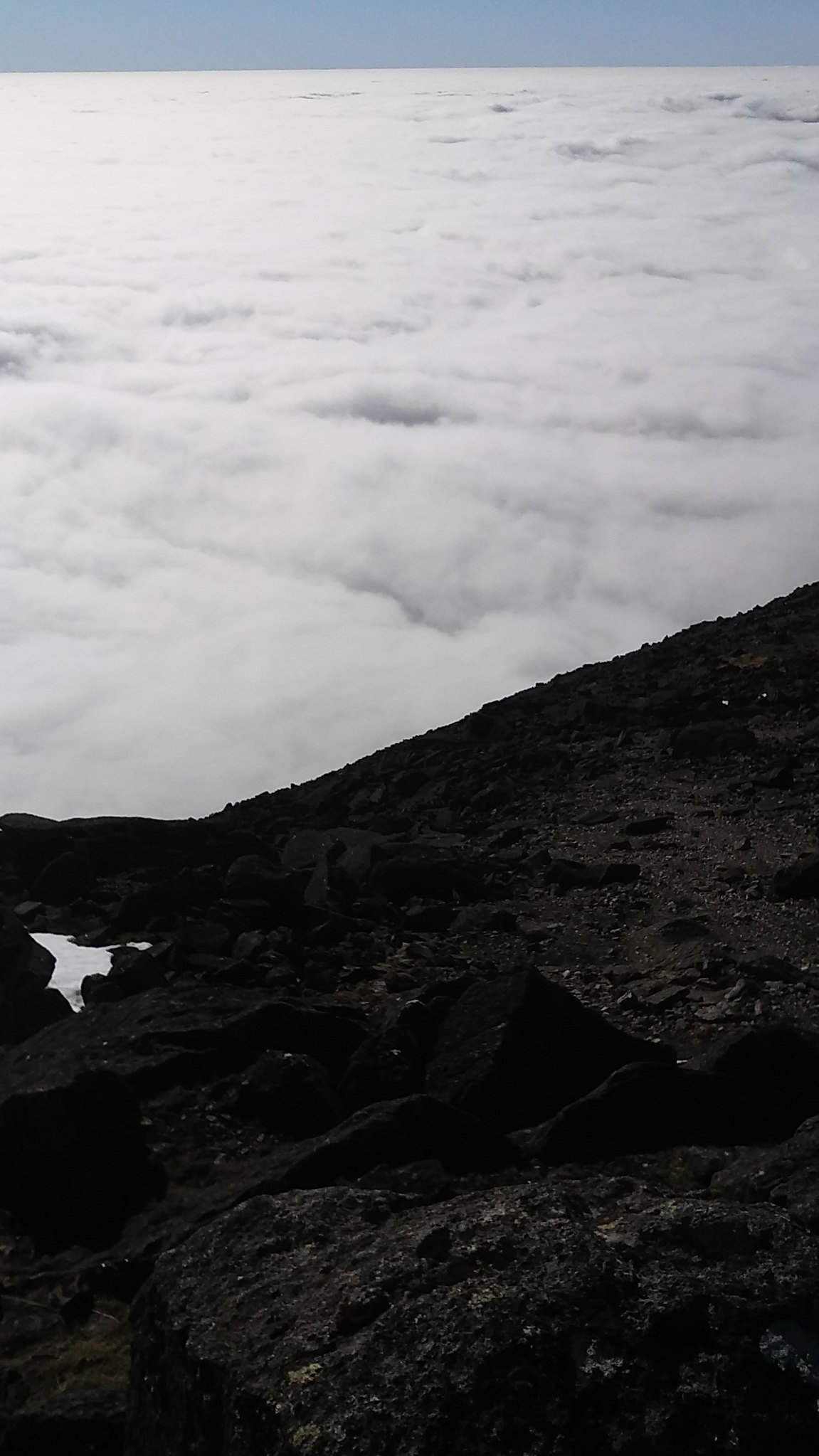 The End of the World

I thought the whole walk to Sgurr nan Eag was just fantastic and will definitely come back to do this again, continuing down to Gars-bheinn. One of my favourite of the Cuillins so far. Even the summit cairn was a thing of beauty! Took some more photos and recorded a birthday video message on my phone for my mum, which she would no doubt get days late with me having no 3G to speak of. 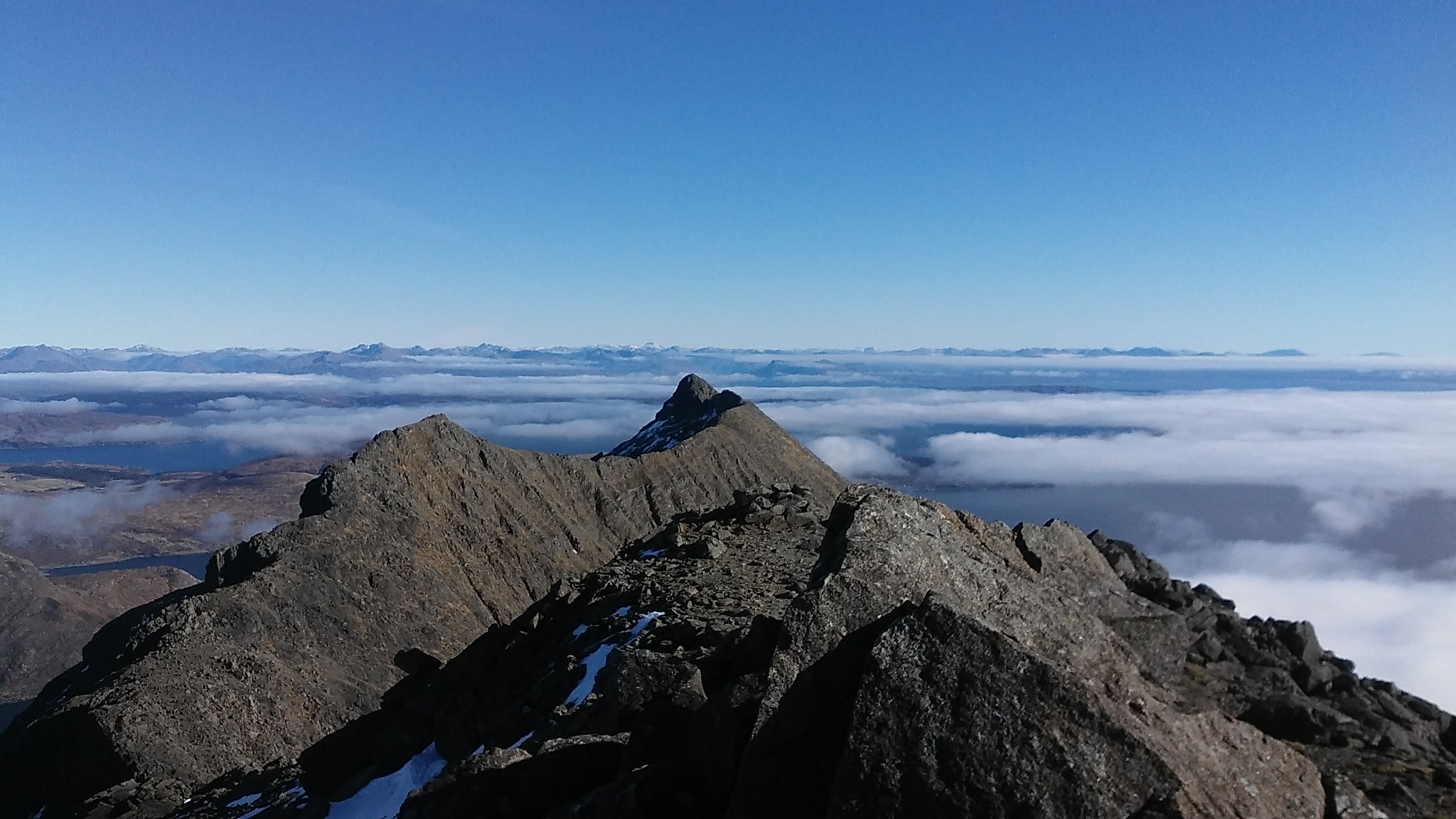 Back along the ridge, I was now dreading the thought of returning to life in the grey. Stopped for a prolonged coffee break/lie down, before making the slowest descent I could manage into the corrie. 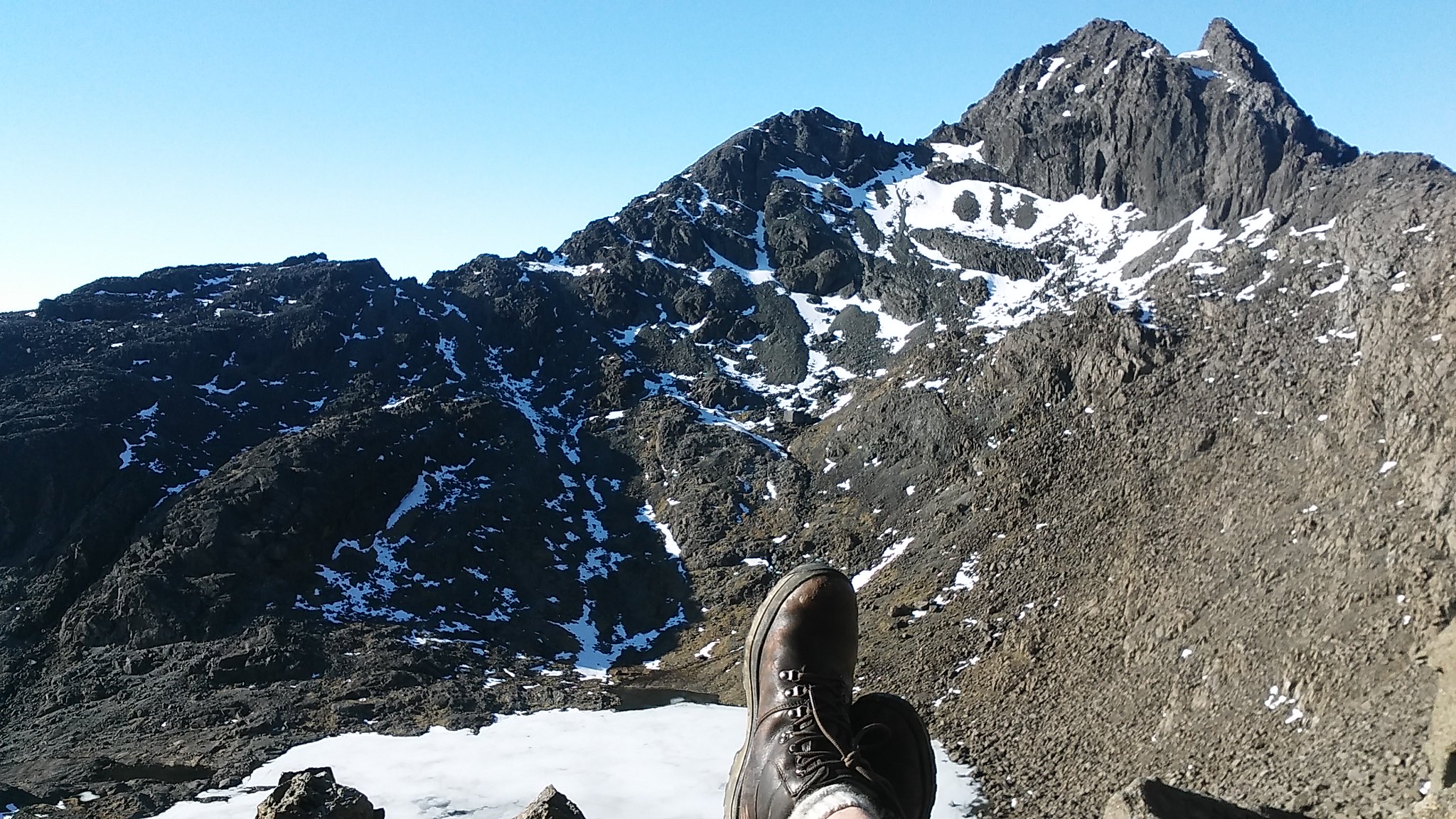 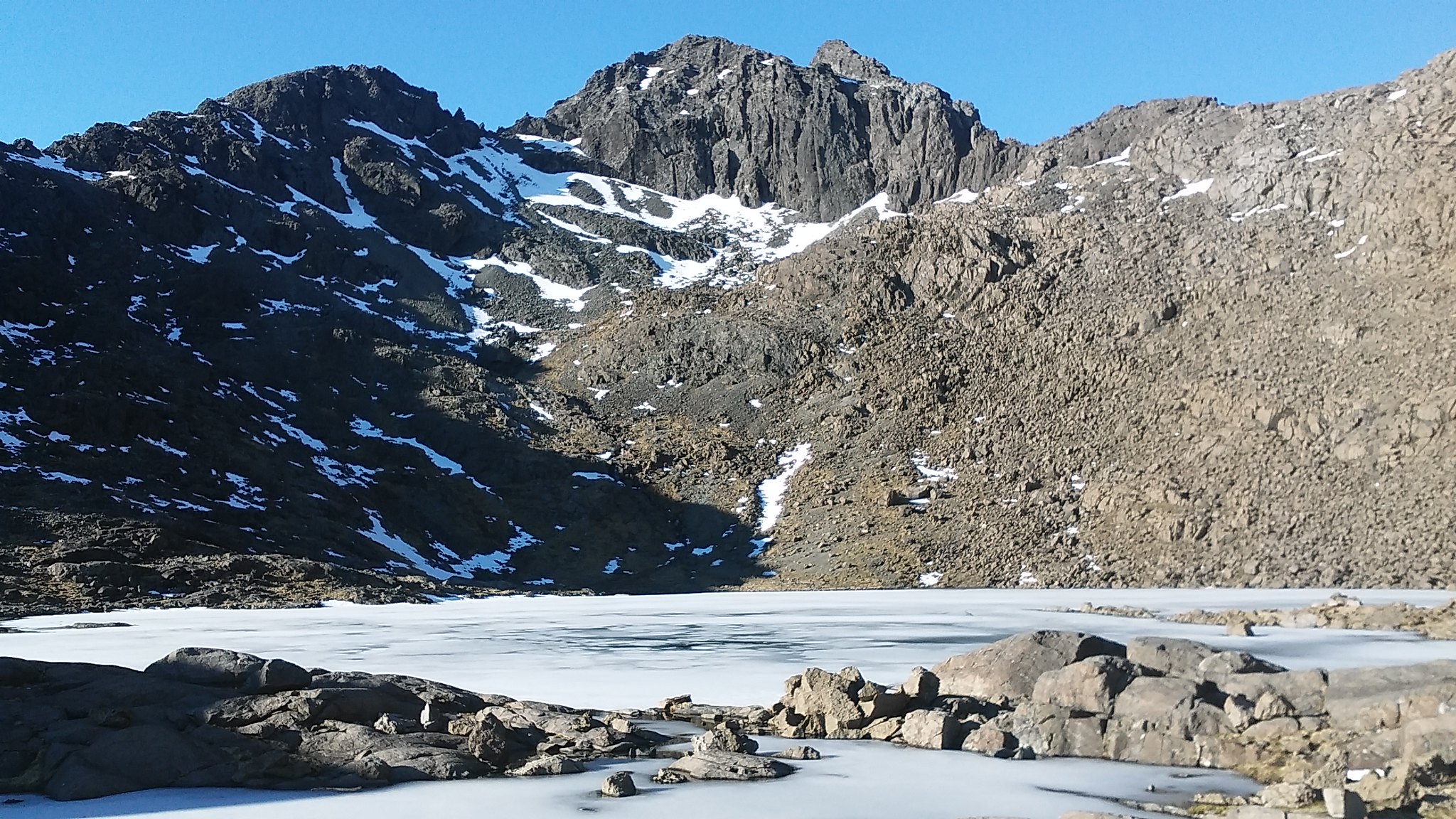 Sgurr Alasdair from below. 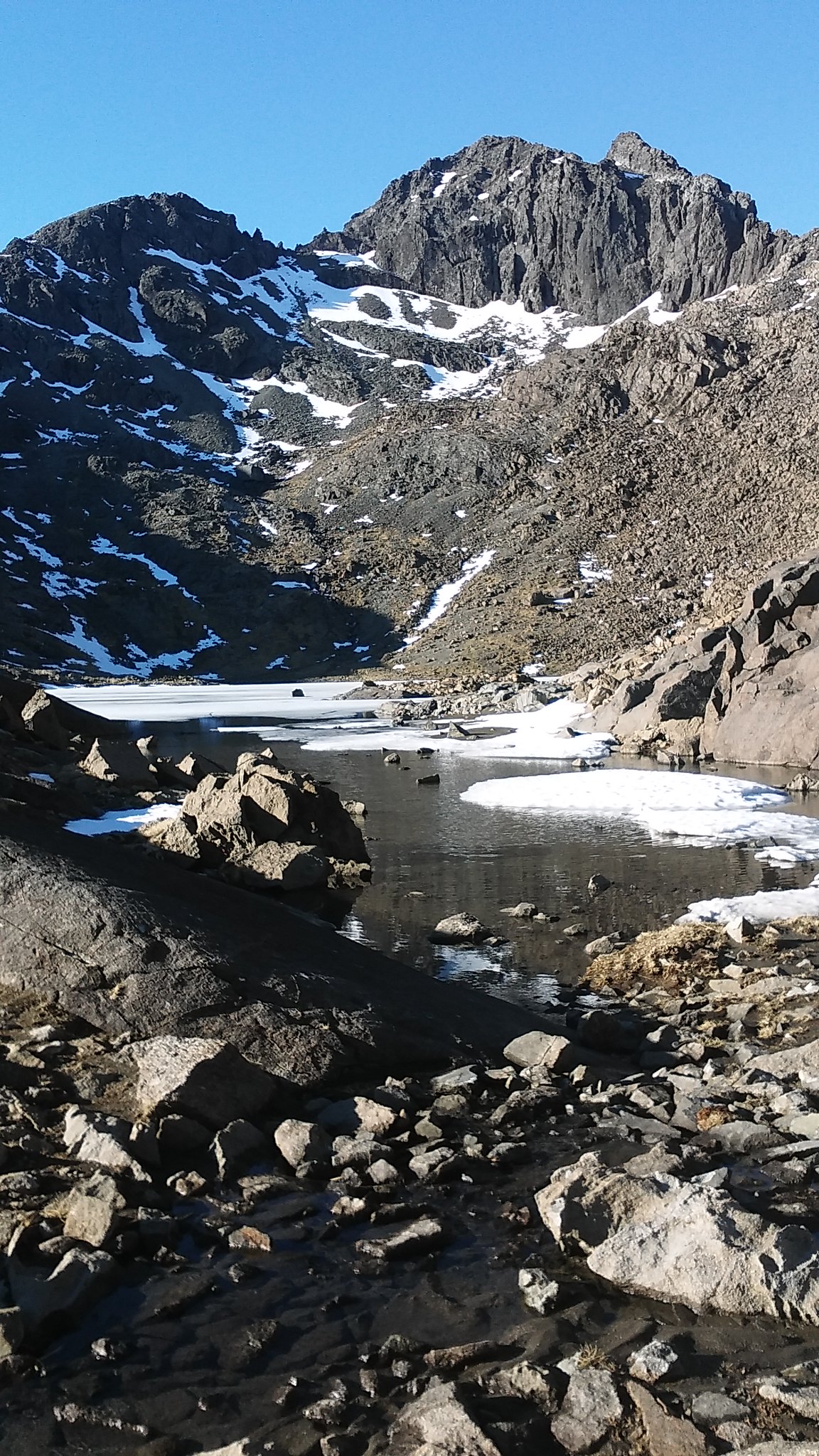 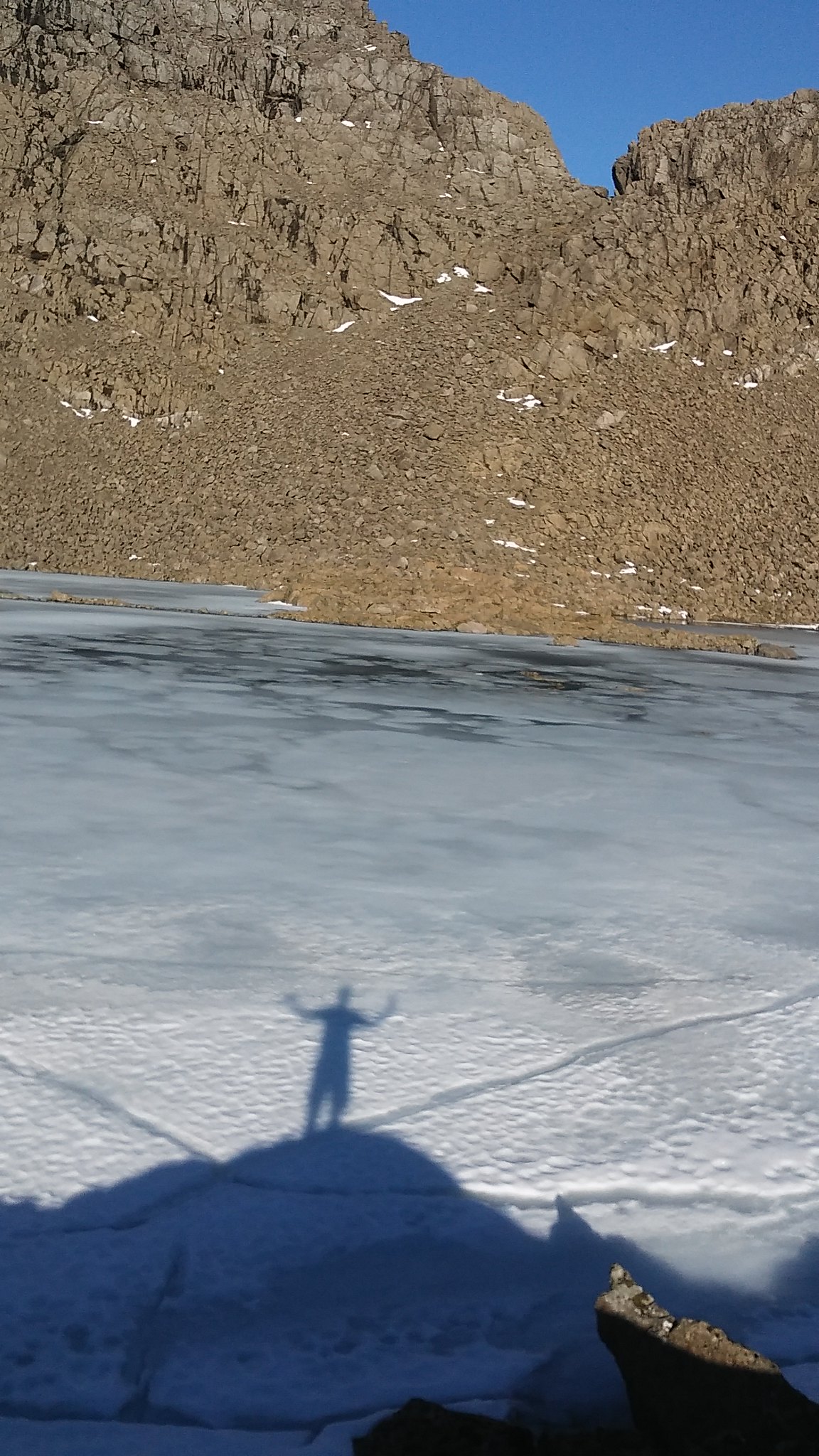 faffing by this point

Meandered around the loch for a while taking pictures, before it dawned on me that there'd be a search party called for if my wife didn't see me in a couple of hours. Headed back down. 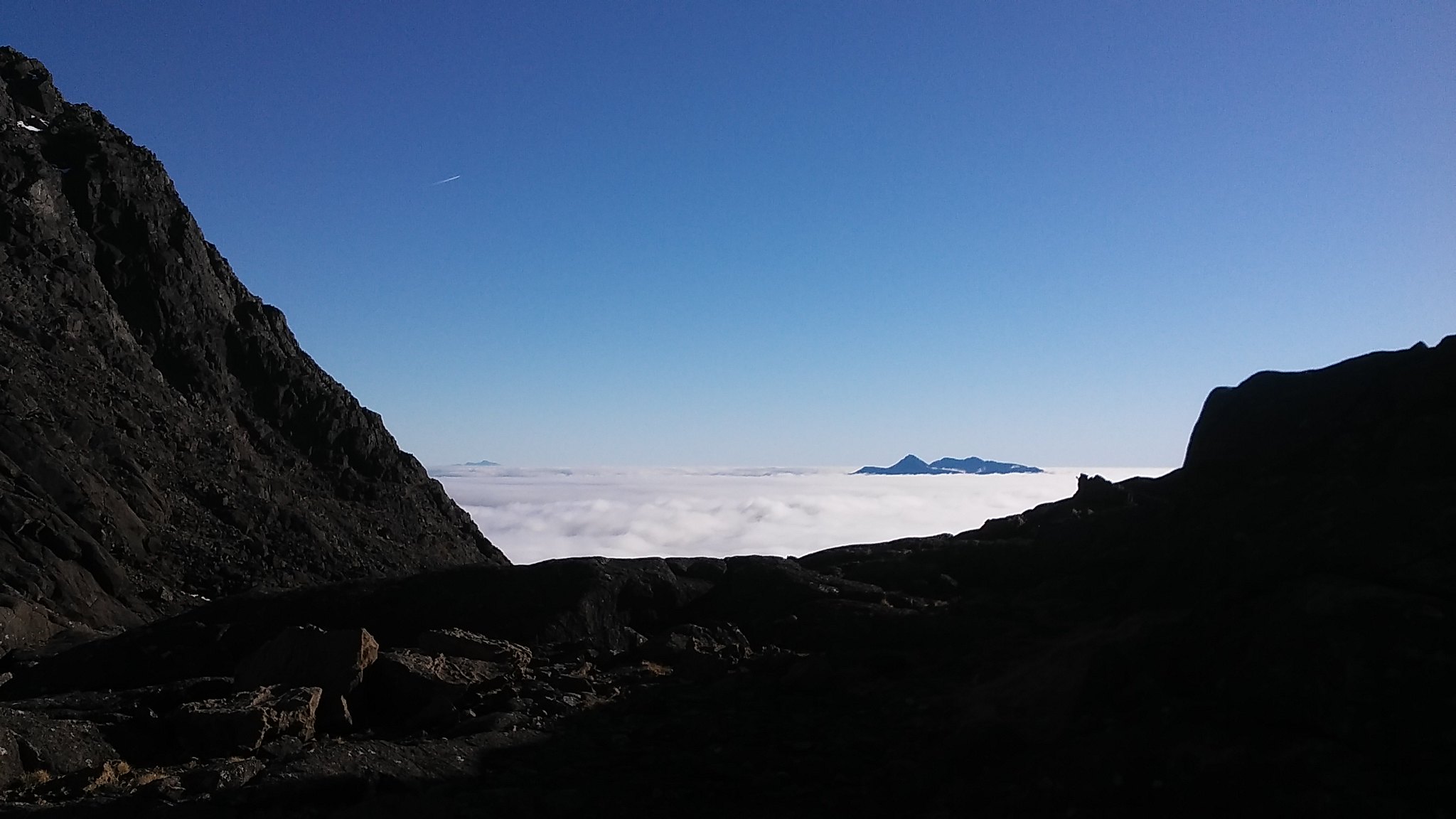 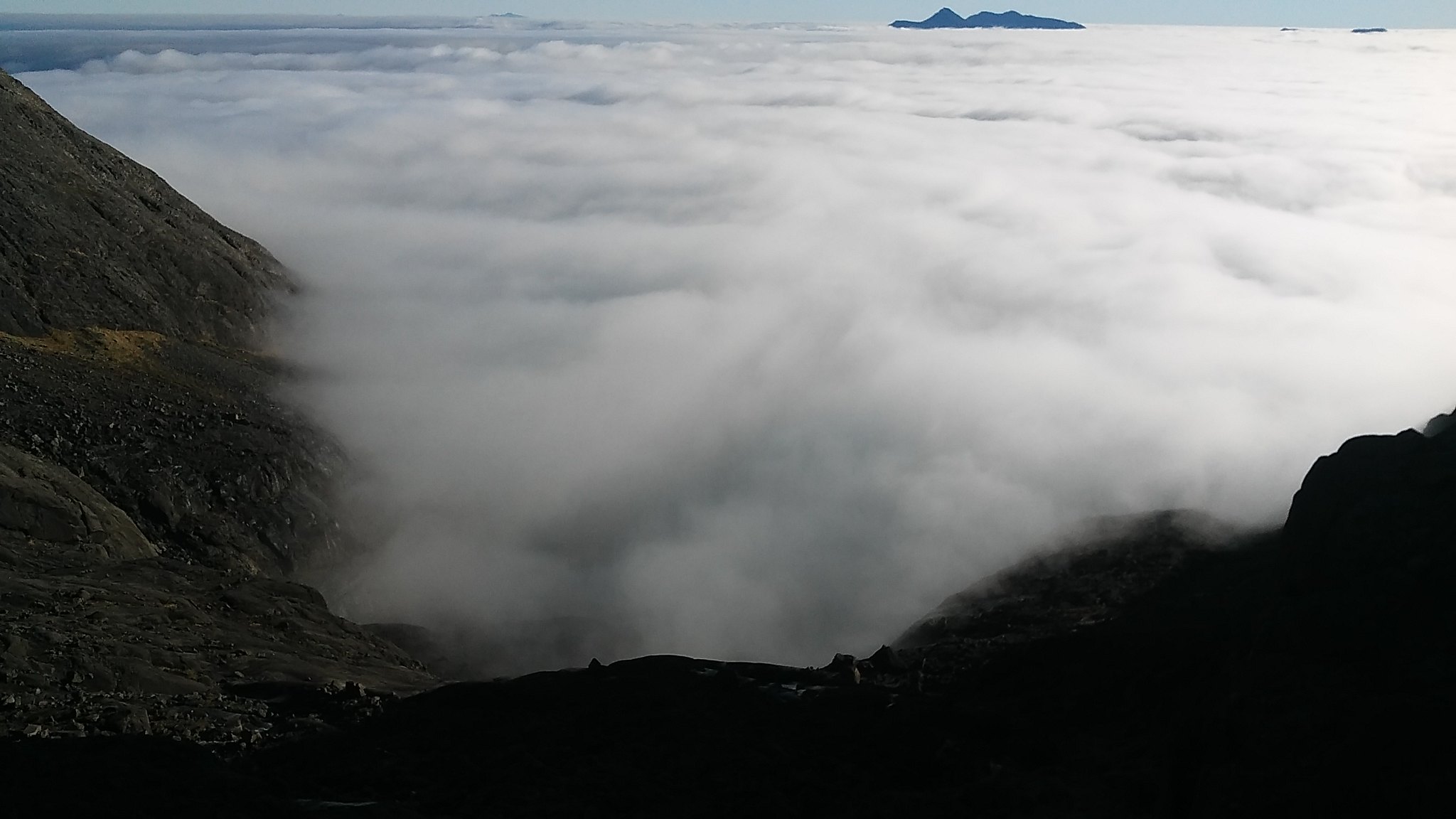 Back in the fog, I made the mistake of getting to far away from the rock face to the north and got drawn towards the waterfall. This left me on big slippy slabs with nowhere to go but back up the way I came. Getting low on energy by this point, so I was a bit annoyed at myself. Up near the waterfall again I noticed where I'd strayed, and found some of my footprints from the morning which gave me a sense of reassurance that I'd not be doing the same thing again. 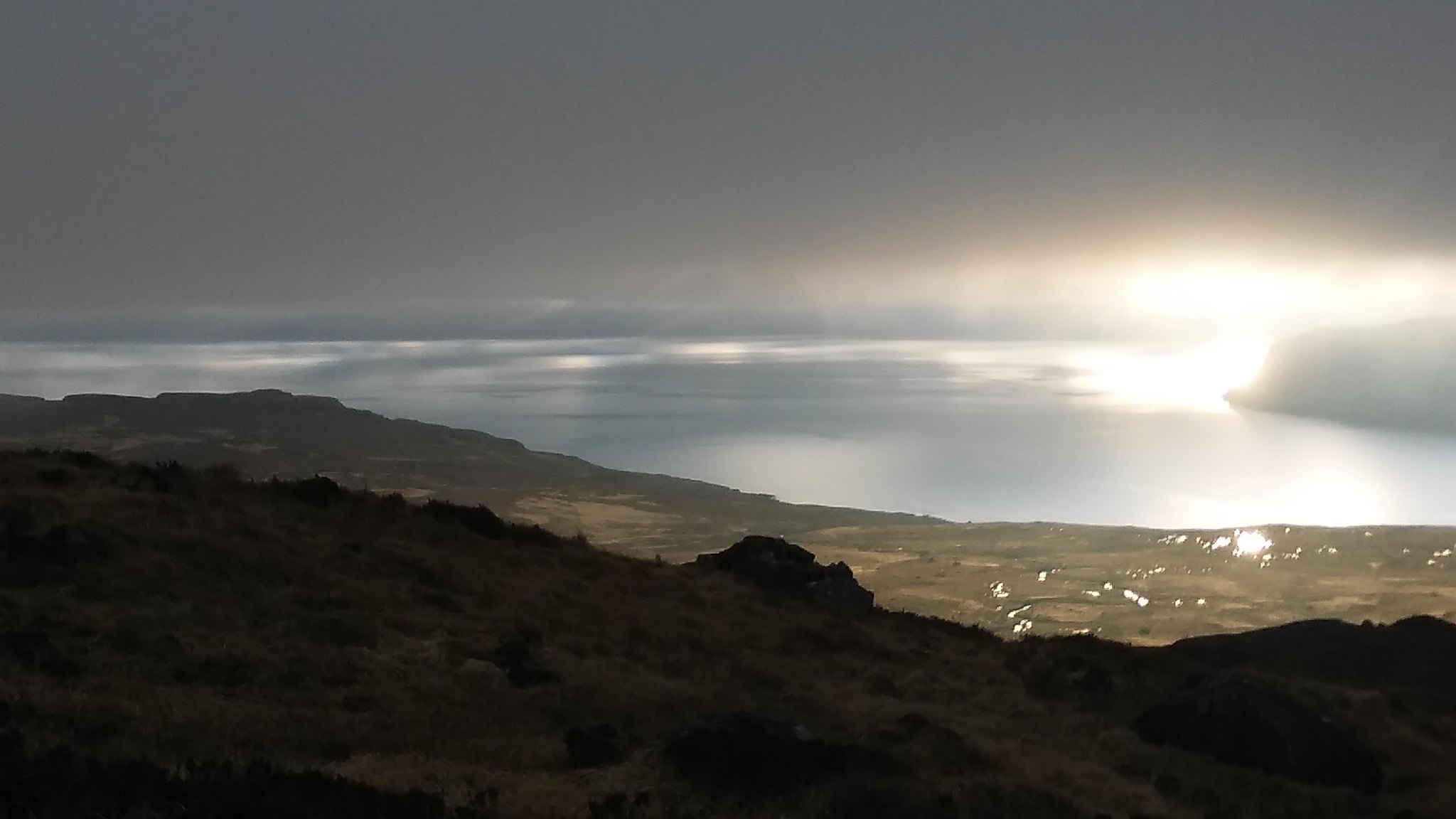 Just as I headed round Sron na Ciche, the sun started to break through, making some nice light on the sea.

I feel very fortunate to have had such an experience, and hope I don't come across as smug for having fluked such a blinder of a day. It was nice recompense for all the times I've set out in sun and summitted in cloud, or having hopes of "it'll clear on the way up" frustrated for the umpteenth time. Made me feel a bit ashamed of complaining so much about "bad" weather.

If like me, you spent most of last summer climbing in rain and clag, hoping that that nice view is waiting at the summit, don't give up on the Scottish hills, you could have the walk of your life waiting for you next time. It could even be on a grey March day on Skye.

Here's to setting off on driech mornings!

That image of Rum is just incredible. I love it...

I can't view your pics (a problem I'm having with 2 or 3 other WH's reports).

Skye seems to have more than its share of inversions, never give up hope when its greymfor a week!

Alteknacker wrote:I can't view your pics (a problem I'm having with 2 or 3 other WH's reports).

I've attempted to PM you the link to the folder on photobucket.

. Might as well be as smug as you can be when you get the chance

Great timing with your report .......hope to do these 2 soon .....though I may wait for more of the snow patches to thaw! ....sounds like you enjoyed them

Weather is Scotland is a bit pot luck....keep trying and eventually you get a good one

That'll be some birthday present for your mum if you've got any of that scenery and atmosphere in. Fantastic pictures.

Great report, and cracking pics of a tremendous day. I just don't know what's happened to the weather since mid-Feb - it's been just brilliant! Long may it continue.

If I'd had a day like that I'd be smug as smug thing in a smug club, soak it up while it's still warm

You got a great day

Users browsing this forum: macgritter, the bearded wanderer and 73 guests