Ample time to bag a Corbett & a cheesy wee Graham

Ample time to bag a Corbett & a cheesy wee Graham


Yet again this was my one chance to get out for a walk this month, and although the forecast wasn't quite the wall-to-wall sunshine of the previous weekend, it actually didn't look too bad for the Sunday 13th, with a chance of views in the afternoon

. I hadn't been up anything higher than a Graham since Hallowe'en 2015, and I thought I might have a look at an easy Corbett-and-Graham duo. Beinn Each & Sgiath a'Chaise are an easy drive from Glasgow, so I thought they'd be as good as any other option.

our_route.gpx Open full screen  NB: Walkhighlands is not responsible for the accuracy of gpx files in users posts
I got a bit of a long lie (well, it's all relative) for once, and didn't leave Milngavie til about quarter to eight. To my relief, the start of the route at a big lay-by on the east side of the A84 at Ardchullarie More on Loch Lubnaig proved straightforward to find, and there was plenty of parking space left, with only one car there before me

. The start of the route is signed as a Public Footpath, initially up a tarmacked track from the south end of the lay-by: About a hundred metres up the track, just after the tarmack runs out, a footpath is signed off to the left of a barn, to cut a big corner and also to avoid the house at Ardchullarie More. Thankfully the path actually proved fairly well maintained, with only very slight squelchiness here and there, and it made for quick initial progress up through the inevitable sea of Christmas trees that 'grace' the lower slopes of these two hills: There are a couple of warning signs to beware small-scale forestry operations and stick to the path, but fortunately there were no yells of 'TIMBEEER' followed by Airborne Forestry Events, and I got up through the trees uneventfully. The path crosses a new forestry track about halfway up (this looks as though it goes down to some sort of hydro works on the Ardchullarie Burn), before eventually reaching a higher track where the Right of Way turns left to leave the forestry at a gate and a sign to 'Beinn Each and Glen Ample Hill Routes'. Although the main summits still had their heads in the Clag at this point, there was an impressive view of Sgiath a'Chaise's craggy southern outlier, Creag a'Gheata: 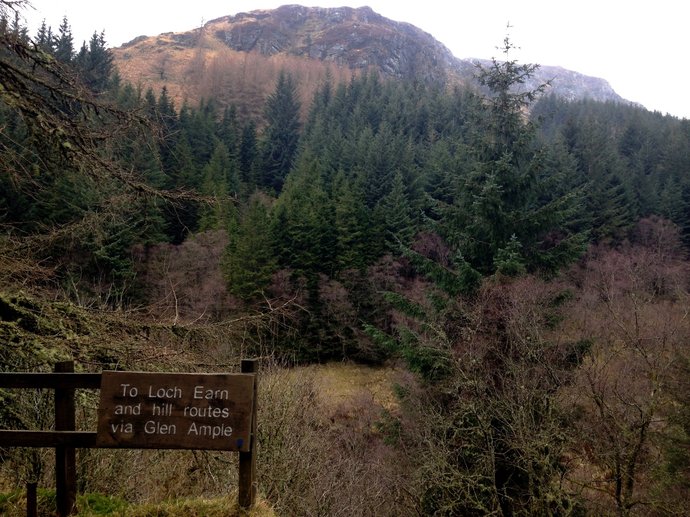 The track continued to give rapid progress up Glen Ample, until I reached the clearly signed hill path off right for Beinn Each. It looked quite a long way up from here, and the Corbett still had its head firmly in the Clag: The first section is relatively steep and a bit of a slog to be honest, although the well-constructed path makes fairly light work of it. I stopped for a breather at a big boulder, presumably a glacial erratic, about a third of the way up. 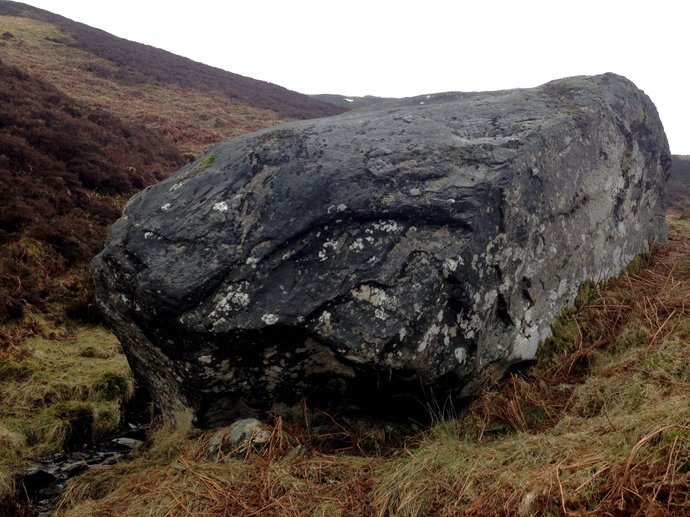 Anyway, just as I was beginning to tire of the Non-Stop Erratic Caberet, the path eventually topped out on Beinn Each's southern ridgeline, with a nice wee airy traverse above Glen Ample for a few hundred metres , with Sgiath a'Chaise hazily visible on the other side of the glen for a couple of minutes before the inevitable ascent into the Clag. There were a couple of wee lingering snow pockets at minor dips on the final approach to the summit, but nothing 'serious', and certainly nothing requiring crampons. The actual summit was a bit anticlimactic when I finally got there, with a very bijou cairn and not much to see other than the inside of a cloud: 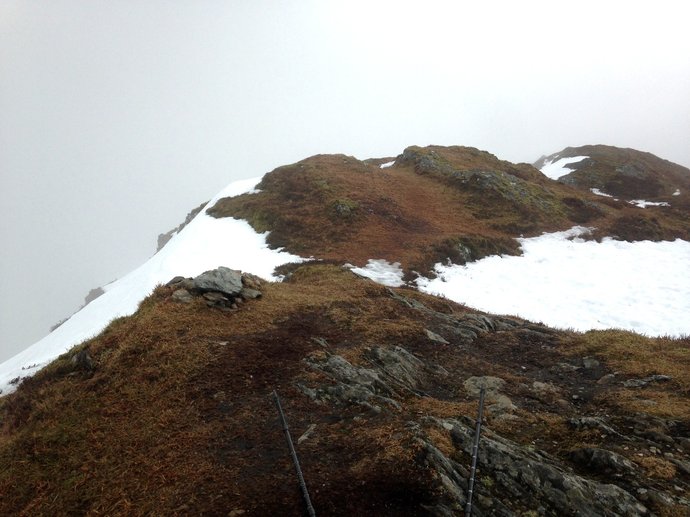 However, just a couple of minutes after I'd given up on any views and started back down the path, the clouds unexpectedly parted to give sudden impressive views westwards towards Ben Ledi, Benvane and the distant (Arrochar) Alps: 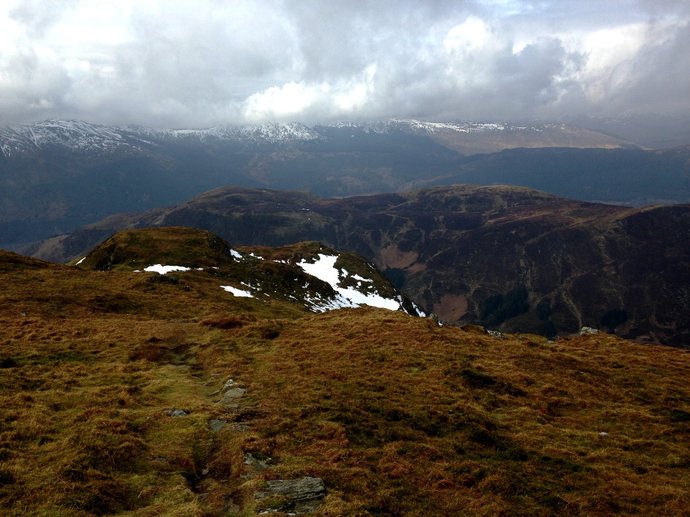 A nice vista across Loch Lubnaig to Ben Ledi: A bit further down, the path splits just before it crosses Beinn Each's western 'spur' (not really a ridge as such). At this point, an obvious (albeit pathless) short-cut presented itself via steep grassy slopes all the way down to the bottom of the glen, with an obvious onwards route up the side of a drystone dyke at the north end of a patch of forestry. Needless to say, the temptation of this directissima route proved irresistible, and I decided to ... (wait for it) cut to the Chaise. (My apologies; they really don't get any better 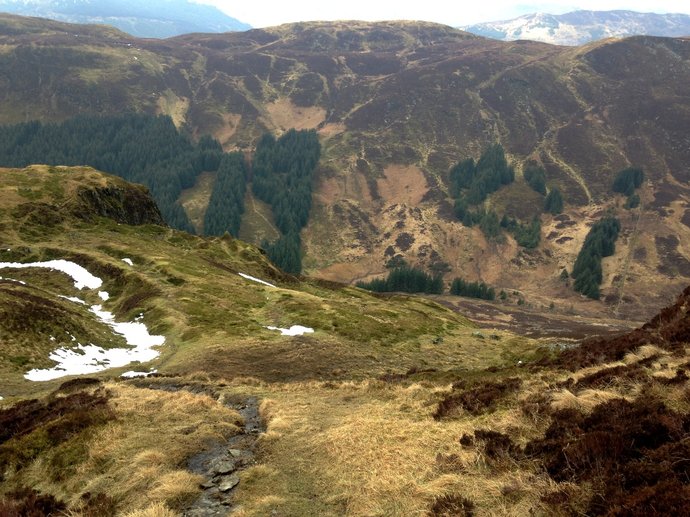 Apparently, the Graham's Gaelic monicker translates as 'Wing of the Cheese' ... answers on a postcard please

.
From the lower slopes of Beinn Each, there was a good view of the Graham's pleasingly craggy southern Top, Creag a'Mhadaidh, with the higher but less interesting main summit just visible behind it: The ascent to the right of the forestry boundary wall proved straightforward, with traces of path, and where the wall turns into a fence at the top of the forestry, it also turned out to be straightforward to jook under the fence then ascend steep heather and grass to reach Sgiath a'Chaise's long whaleback ridge just south of Creag a'Mhadaidh. There were interesting views back across Glen Ample to Beinn Each, looking craggier than expected from this angle: 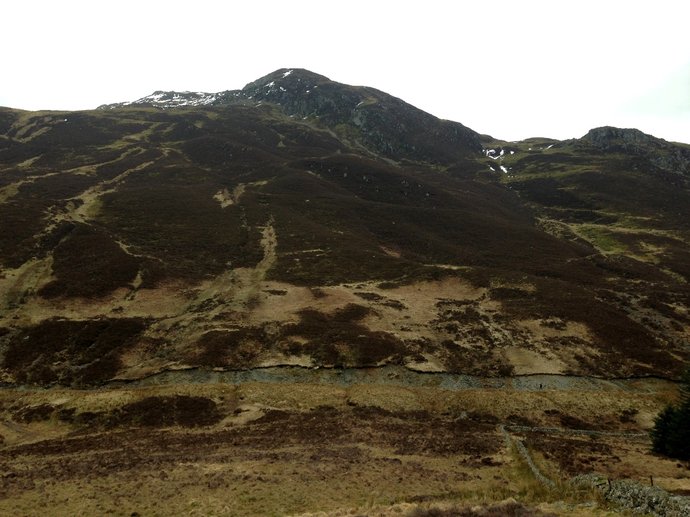 Once up on the ridge, I found a reasonably defined path that speeded progress, and despite a bit of peat-haggery at the bealach, it wasn't too much longer until I was at the Graham's rounded main summit, which is marked by nothing more than a big post with two or three stones round it. From here, there is a very clear outlook towards Beinn Each's pleasingly knobbly north ridge, which links it to the Munro, Stuc a'Chroin: The continuation from Beinn Each to the Munro looks a grand walk, as noted on the website's route description for the Corbett, but probably not for the likes of me at this time of the year - not when I was out on my own, certainly.
Another view of Stuc a'Chroin from Sgiath a'Chaise main summit, with Ben Vorlich keeking out over its shoulder: And a view northwards to, I think, Loch Earn and the Lawers range: ...And to the northwest: 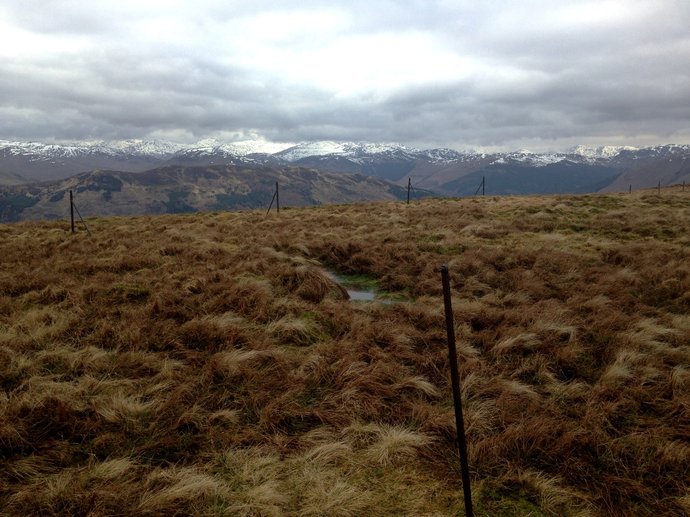 Ben Ledi and Benvane looking unexpectedly grand to the west across Loch Lubnaig: To the south, the eye follows the line of the Highland Boundary Fault - I think there may even have been a very distant glimpse of the Arran Corbetts, although I didn't manage to get a decent photograph. ...But is that wee conical hill in the mid-distance possibly Conic Hill, to the east of the south end of Loch Lomond...? Here's a zoomed shot: 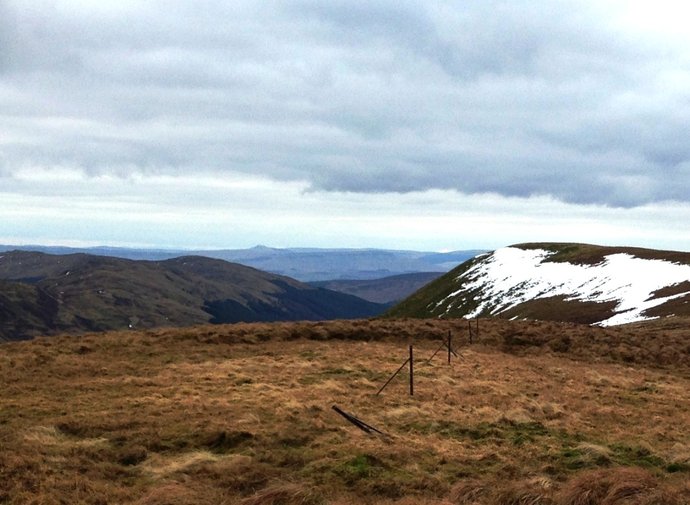 Now, although that pole does allegedly mark the Graham's main summit, Sgiath a'Chaise also has a rounded northern Top that is marked on the OS map as only one metre lower. Bearing in mind that surveyors have been known to be wrong before, I thought I'd better bag it while I was up here anyway, just in case they change their minds in the future!
This involved an 'interesting' detour across a first (relatively straightforward) line of peat hags; then an initially formidable-looking deer fence (thankfully there turns out to be an obvious gap that can be squeezed through); then across a second, trickier line of peat hags. The reward for all of this was a grand close-up view of Ben Vorlich and Stuc a'Chroin, with the Stuc's Prow just visible from a rather unfamiliar angle: 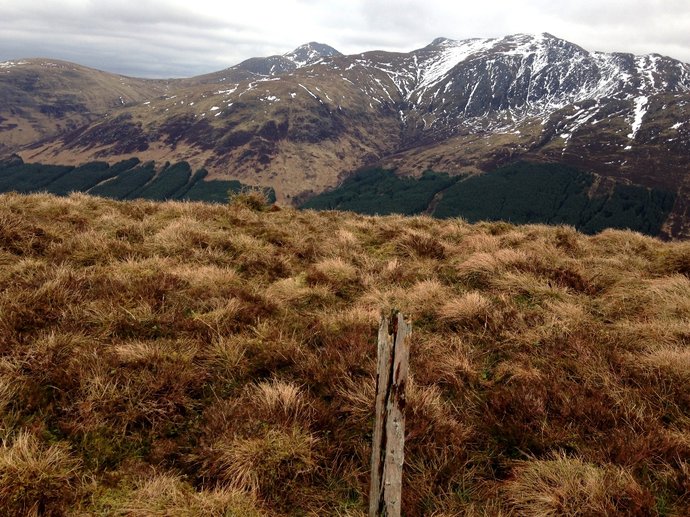 This was as far as I'd be going today, however. It was time for more Fun with Peat Hags, to get back to the main south summit, then re-trace my steps down into Glen Ample and back down the track to the car. As is often the case with these lower hills, this was a much better outing than I'd expected. Beinn Each is just craggy enough to be interesting without being too challenging; the Graham maybe doesn't have such pleasant geomorphology in itself, but like many supposedly 'boring' wee hills, it turned out to have excellent grandstand views of its bigger neighbours, as well as having a nice back-country feel to it. 'Ample' time for a two-bagger on a short March day too, and home in plenty time for dinner

Looks like a good way to join them up. I did Sgiath a'Chaise separately via the forest roads, and the view of Beinn Each and Stuc a'Chroin was so tempting I had to go back a month later and finish the job!

The conical hill is Meikle Bin I'm pretty sure. I remember it being the only long-range view as Sgiath a'Chaise is so hemmed in by the Trossachs/Lawers/Crianlarich giants.

Craiging619 wrote:Looks like a good way to join them up. I did Sgiath a'Chaise separately via the forest roads, and the view of Beinn Each and Stuc a'Chroin was so tempting I had to go back a month later and finish the job!

The conical hill is Meikle Bin I'm pretty sure. I remember it being the only long-range view as Sgiath a'Chaise is so hemmed in by the Trossachs/Lawers/Crianlarich giants.

Thanks! Yes, I remember seeing your WR going up the other side of Sgiath a'Chaise from Strathyre - a completely different walk by the looks of it - I like those hills that have more than one equally good approach route

The cheesy wee Graham refers to the day when cattle in milk would be grazed there in Summer , milked and vast amounts of crowdie , butter and cheese made and laid in for Winter

Sgiath , aye a wing but really a description of land shape more like a corner

The cheesy wee Graham refers to the day when cattle in milk would be grazed there in Summer , milked and vast amounts of crowdie , butter and cheese made and laid in for Winter

Sgiath , aye a wing but really a description of land shape more like a corner

- I suppose that is the same reason then that Beinn Ime in the Arrochar Alps got its name, 'Butter Mountain'?
I tend to forget now that the hills are all sheep, that it would have been cattle back in clan times.
Thanks as ever for the expert info!

Cheers Kenny
added 30 minutes to my Corbett/Graham outing today. Glad i read your walk report as the N to of Sgiath a'Chaise does look higher so decided like yorself to be sure in case remeasured in future, 1m could easily be out...

Users browsing this forum: iangpark, Steve B and 44 guests